It's all about perspective for architecture professors 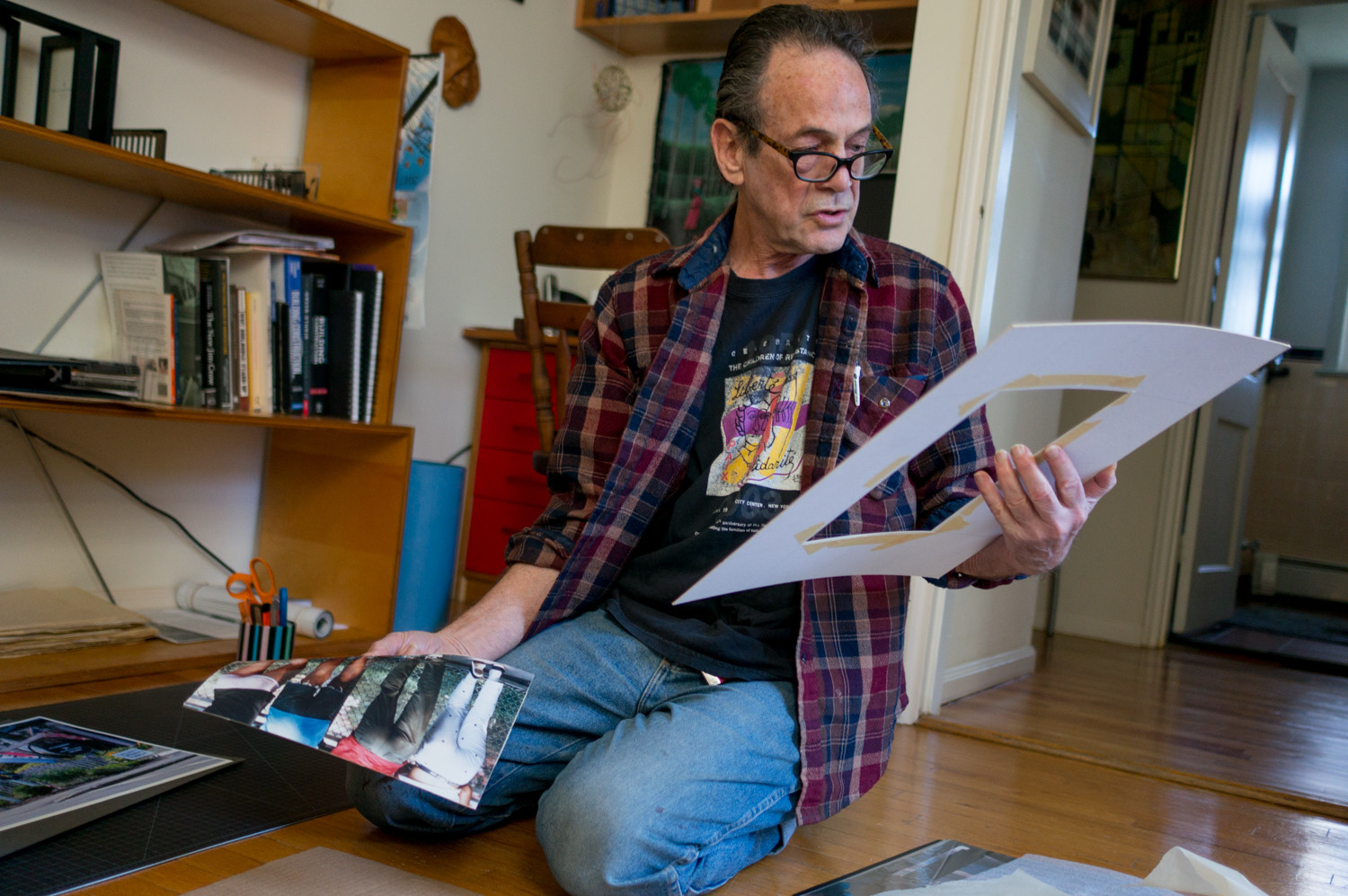 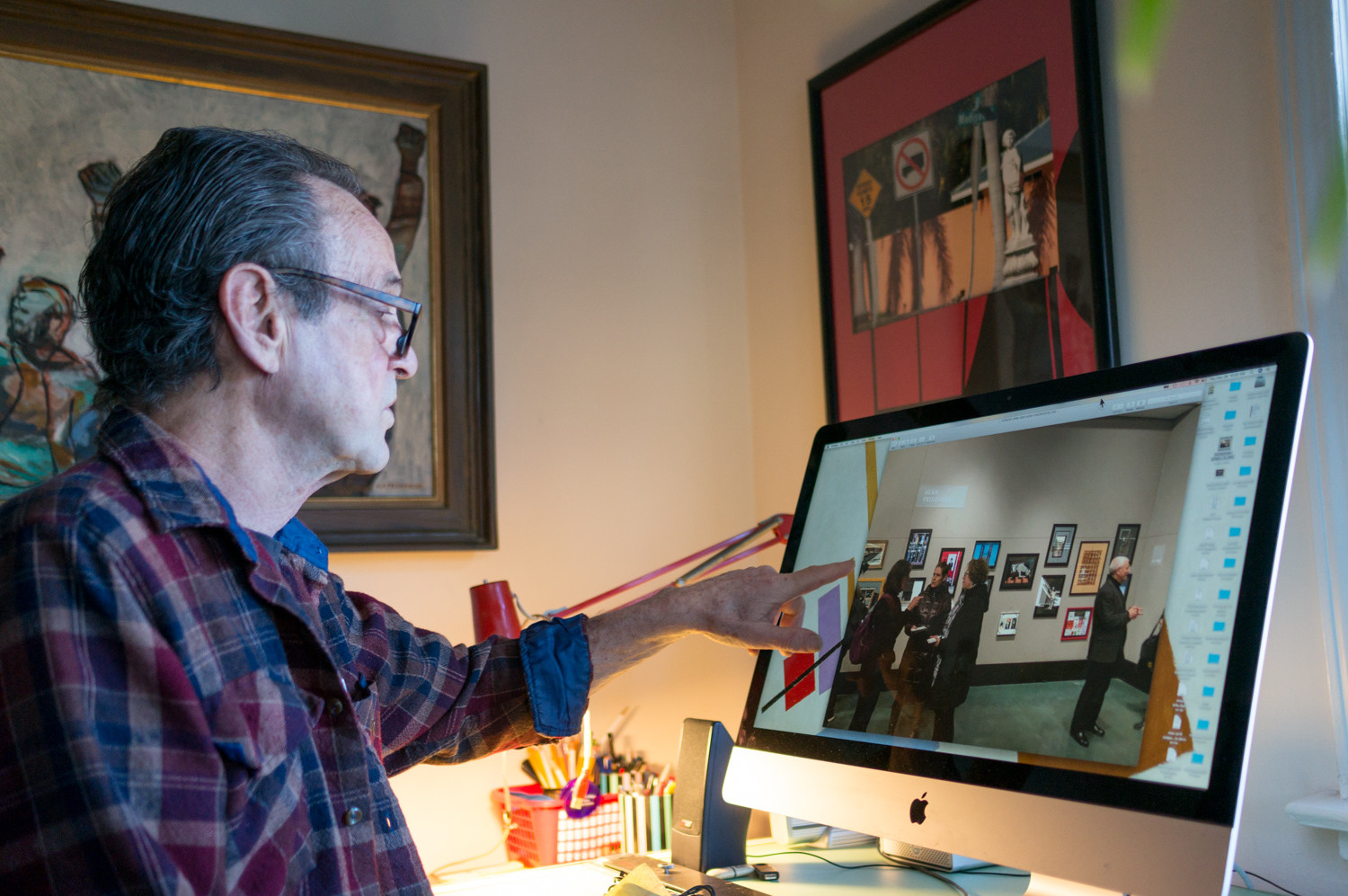 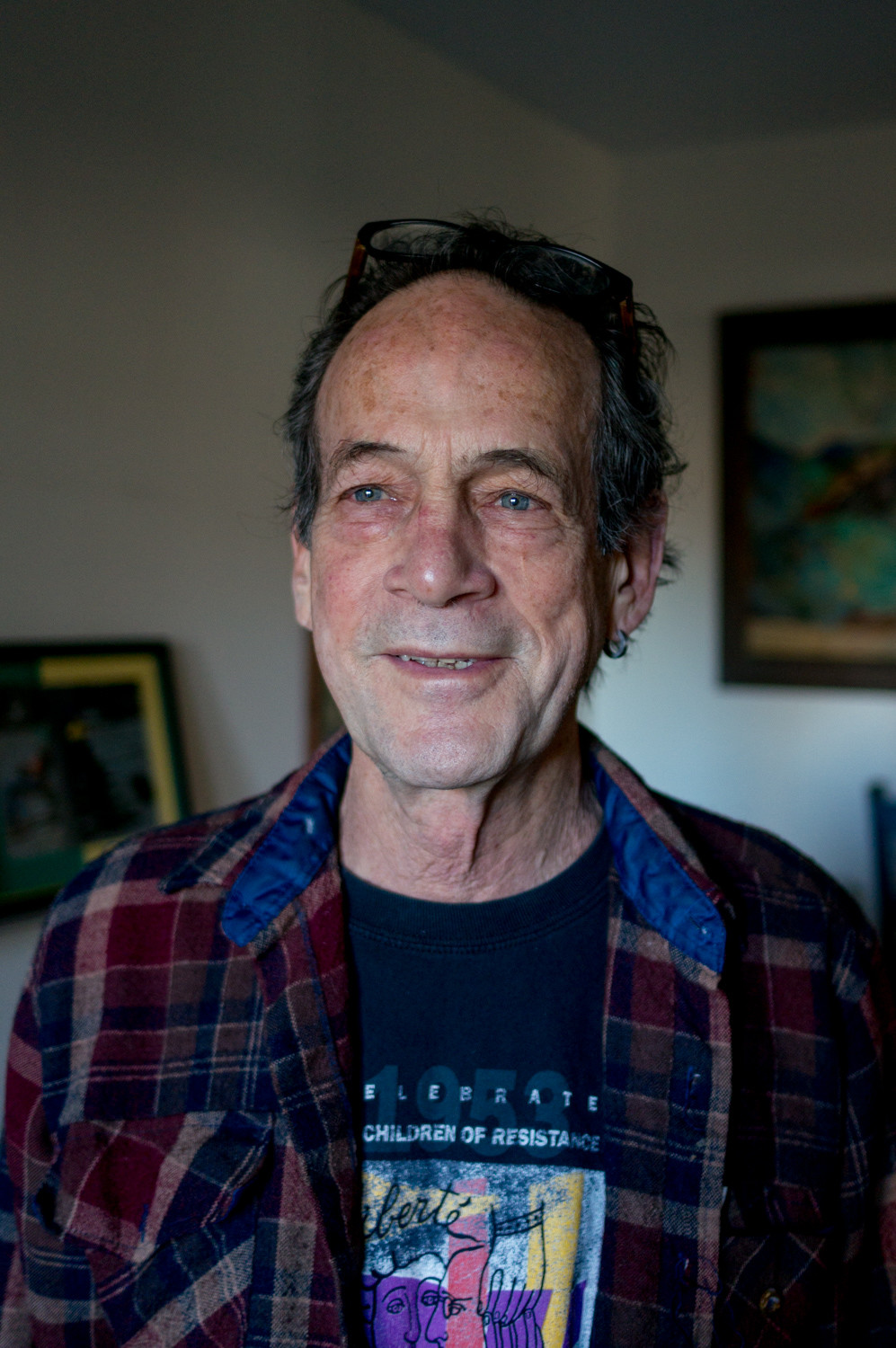 Alan Feigenberg likes to combine elements with his photographs to give them greater depth. He often customizes his frames to embellish certain parts of his pictures.
Julius Constantine Motal 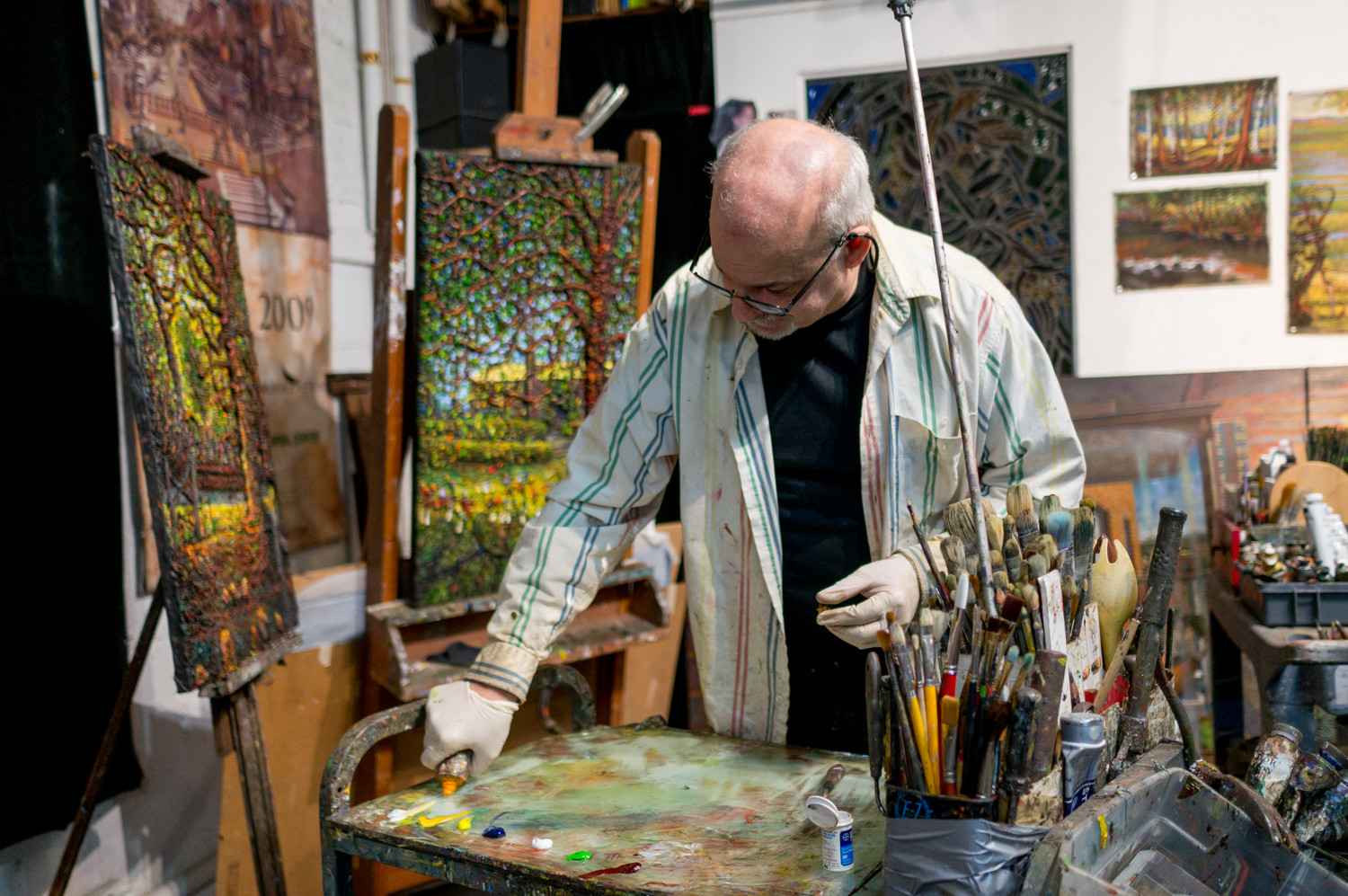 Daniel Hauben prepares his color palette in his Riverdale studio. Hauben is one of five artists featured in the exhibition 'Five Artists + Architecture' at City College of New York. He’s also been a professor there for 12 years.
Julius Constantine Motal 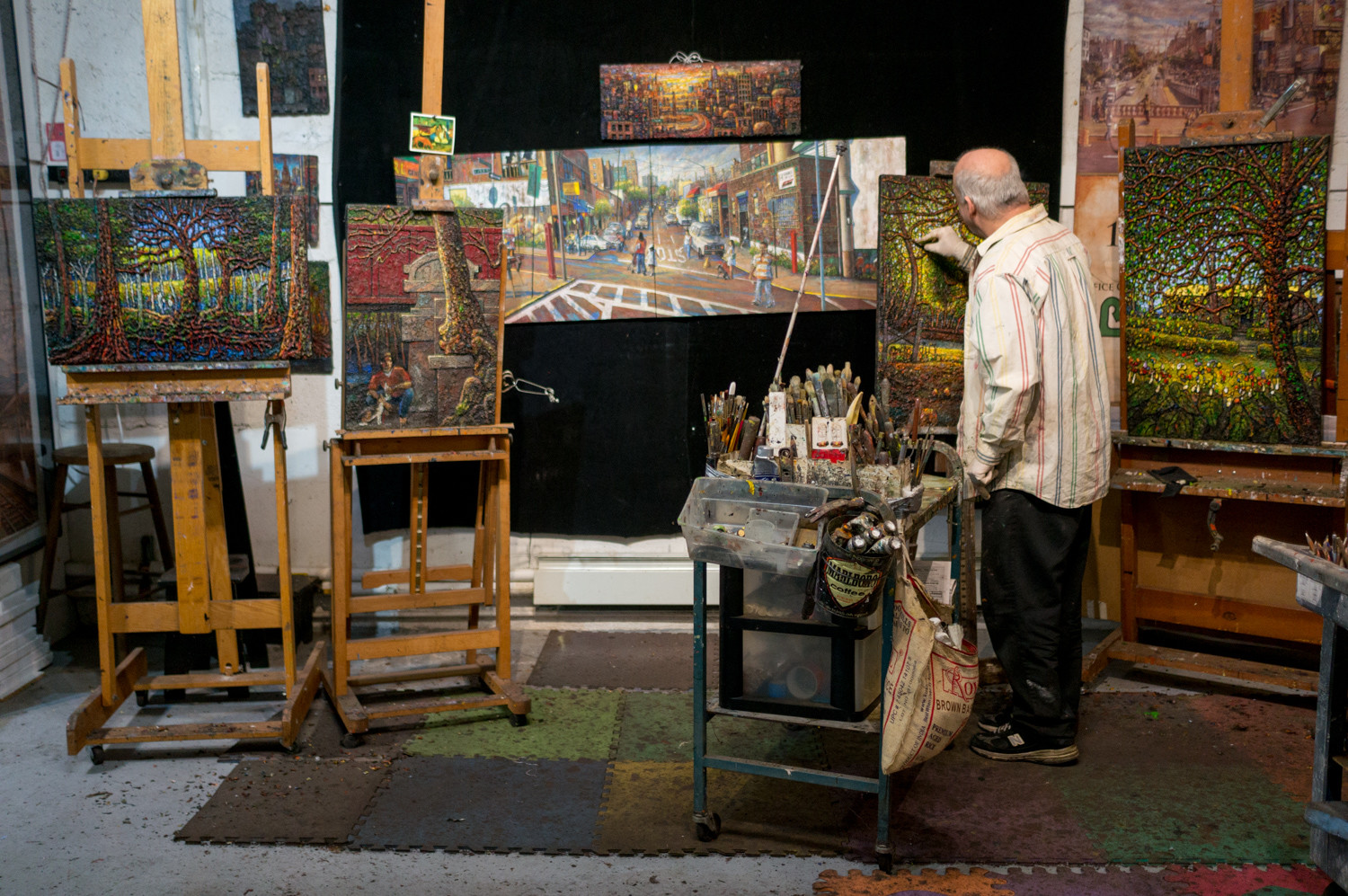 Daniel Hauben works on a painting in his studio. Hauben's paintings are often known for their texture in which figures rise off the canvas creating a three-dimensional effect.
Julius Constantine Motal 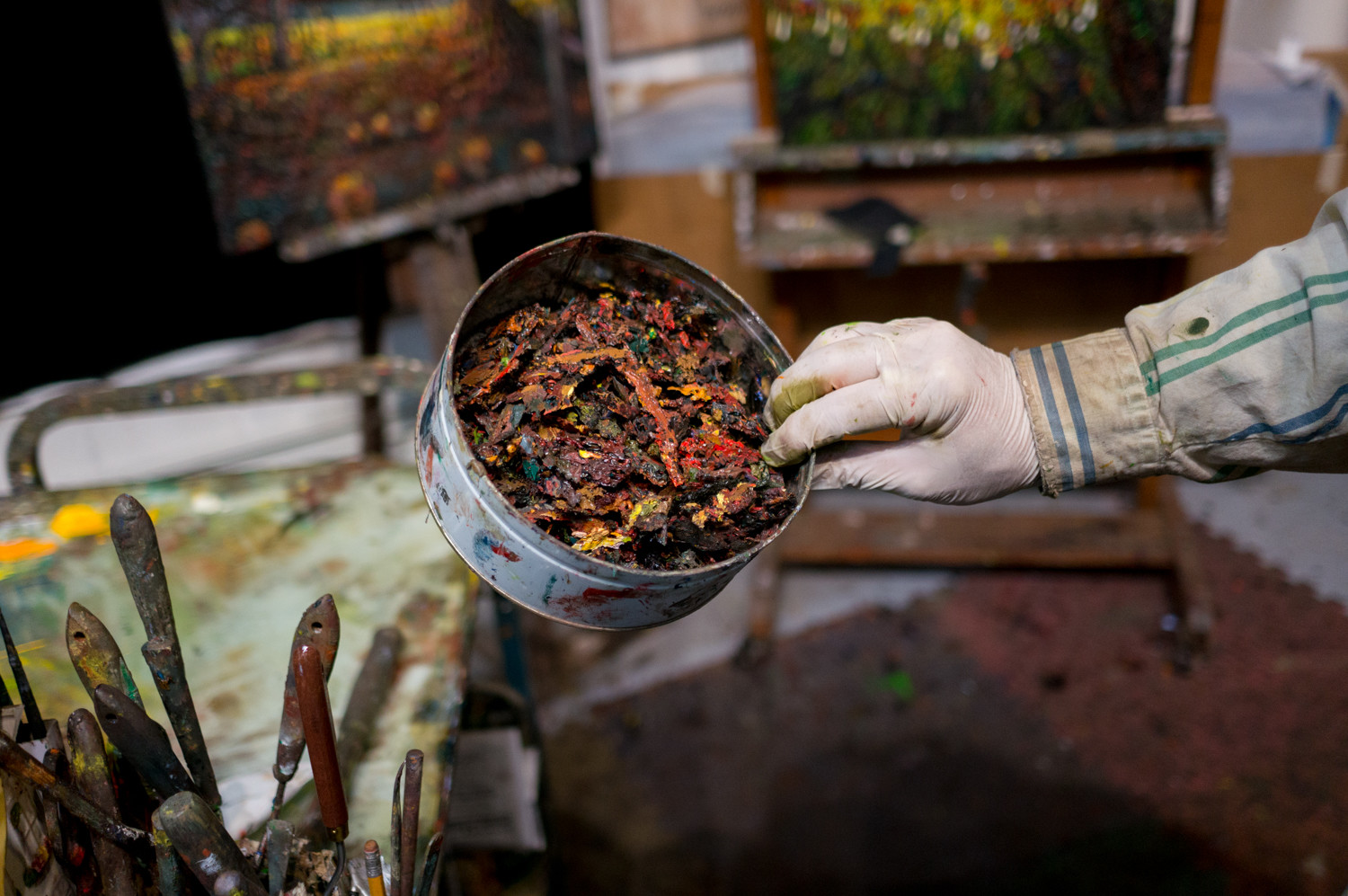 Daniel Hauben collects paint chips in a tin that he later applies to other paintings to give them texture.
Julius Constantine Motal 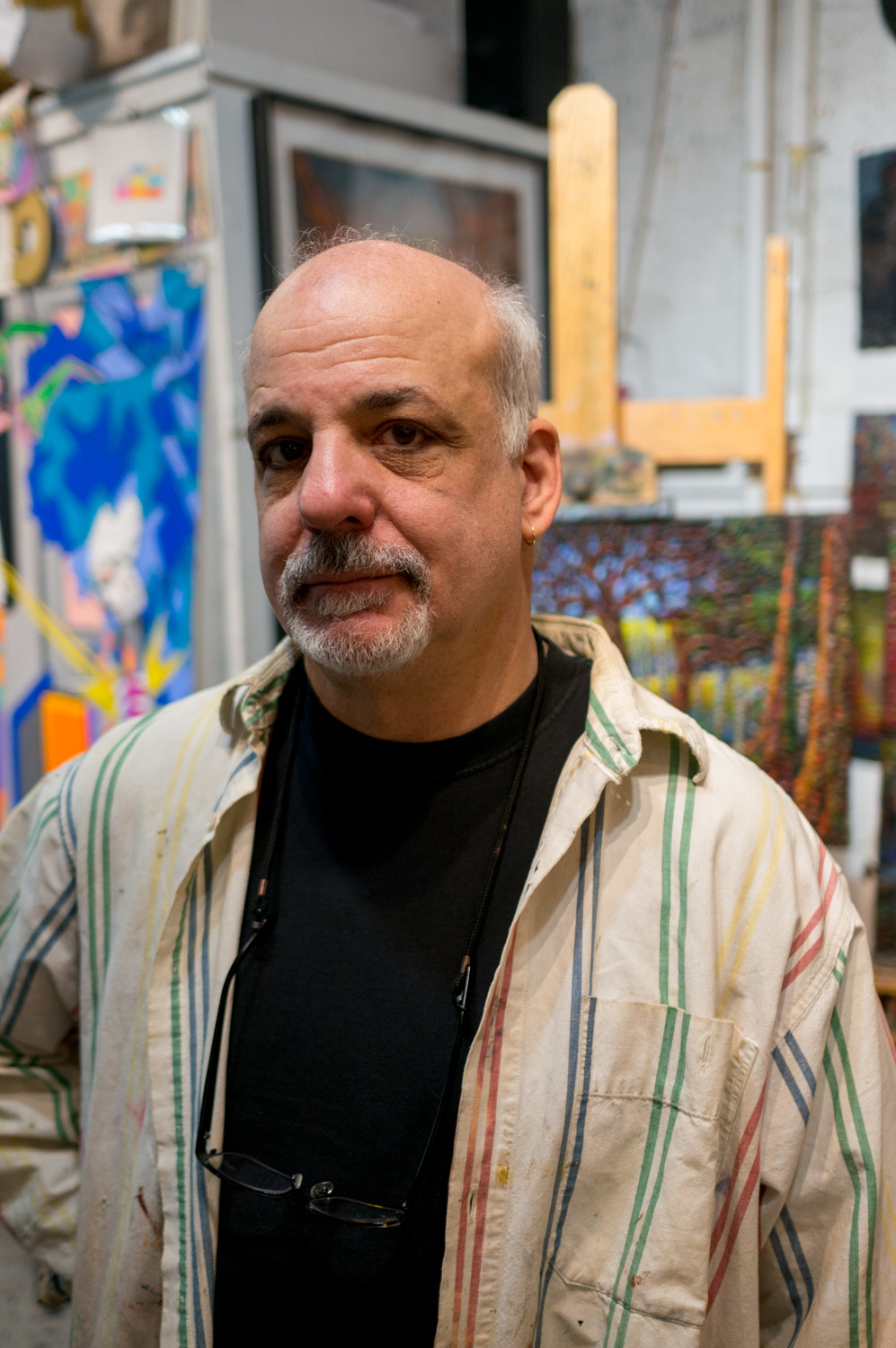 In addition to his work as an artist, Daniel Hauben teaches at City College of New York where some of his work is featured in the exhibition 'Five Artists + Architecture.’ The exhibit focuses on five of the school’s architecture professors and their artistic endeavors.
Julius Constantine Motal
Previous Next
By TIFFANY MOUSTAKAS

Even when classes aren’t in session, Daniel Hauben and Alan Feigenberg are still at work.

When they aren’t instructing classes at City College of New York, both pursue art on the side. Hauben focuses on paintings while Feigenberg is a photographer.

Now, their work — along with pieces from three of their other colleagues — is featured in the Bernard and Anne Spitzer School of Architecture exhibition “Five Artists + Architecture,” which runs through Feb. 16.

“Five Artists” takes a look at the vast artistic abilities these five professors had, ranging from sculpting to painting. The goal, Feigenberg said, was always to highlight the work of the professors.

“We pushed it because we felt it was important to have something different, and also to show both the community — but especially our students and ourselves — the incredible diversity of creativity the school of architecture has,” Feigenberg said. “It wasn’t just (showing) buildings.”

Hauben’s paintings in the exhibit focuses on street scenes that range from a view of Kingsbridge with Riverdale “looming in the horizon” to drawings of Rector and Washington streets after the Sept. 11, 2001 terrorist attacks.

Feigenberg, on the other hand, describes his work as a “potpourri” of photographs of people’s backs and other pieces that play on symmetry, geometry and structure.

The lessons and experiences Hauben and Feigenberg acquired as artists over the years found their way to their respective classrooms.

Feigenberg has taught a plethora of courses at City College for 36 years, while Hauben has taught a basic drawing class there for 12 years. Perspective is the key component for both instructors when it comes to teaching their students. But each has their own approach.

Hauben sees his job as helping students find their inner creativity, building upon the creative process they already possess, or just keeping that spirit alive.

“The hope is if you’re an aspiring architect, that there would be a creative aspect to the work that you’re doing,” Hauben said. “You’re not just in an office with 1,000 other people doing a technical thing. So I think there’s more of a chance of your life, your career, (of) being creative if you’re exposed to the creative process.”

Feigenberg pushes students to work with each other and think outside of their initial perspectives.

He put this idea into practice when he taught a construction class with Christian Volkmann, a fellow City College professor. The two debated on whether or not concrete or steel was better, and Feigenberg could tell the students were thrown off by watching the two argue over it during the lecture.

“As we get towards the end, we talk about how it’s really not one or the other, but how we use them under better situations and combine them,” Feigenberg said.

When the exhibition held its opening reception Dec. 20, Feigenberg said former students from as far back as the 1980s came to support the show. They were able to understand the concept of his work thanks to what they had learned all those years ago.

“It was really moving,” Feigenberg said.

Although the primary hope of the show is to highlight the artistic creativity of City College’s architectural program, Hauben also hopes it impacts people from outside their collegiate community.

CORRECTION: The exhibition “Five Artists + Architecture” running at the City College of New York’s Anne Spitzer School of Architecture runs through Feb. 16, after an opening reception Dec. 20. A story in the Jan. 4 issue included wrong dates.