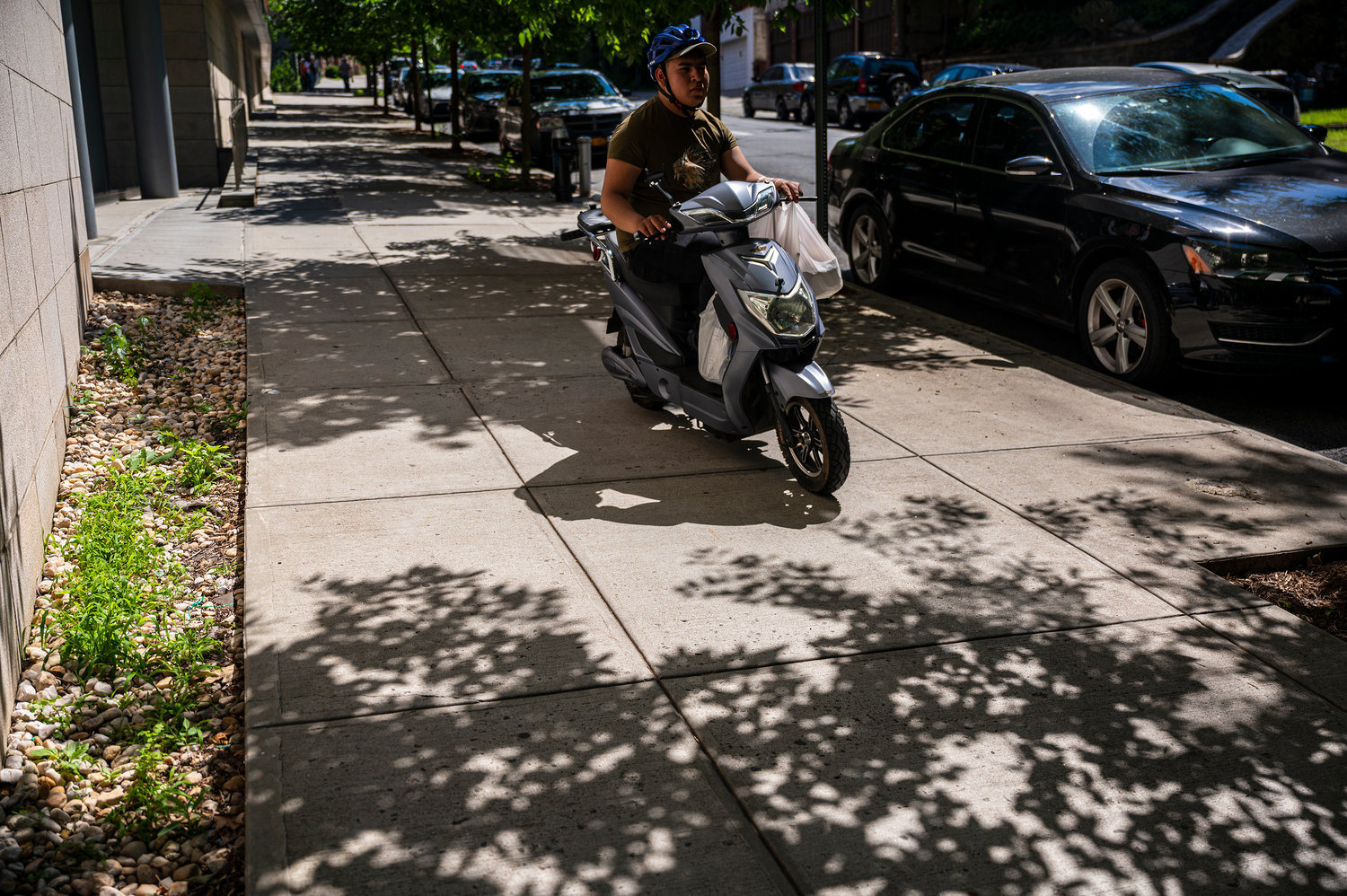 Residents hear the noise of scooters and other delivery vehicles zip past them on a beautiful path in front of Manhattan College’s Kelly Commons. They first became a problem in 2020 during the pandemic.
Hiram Alejandro Durán 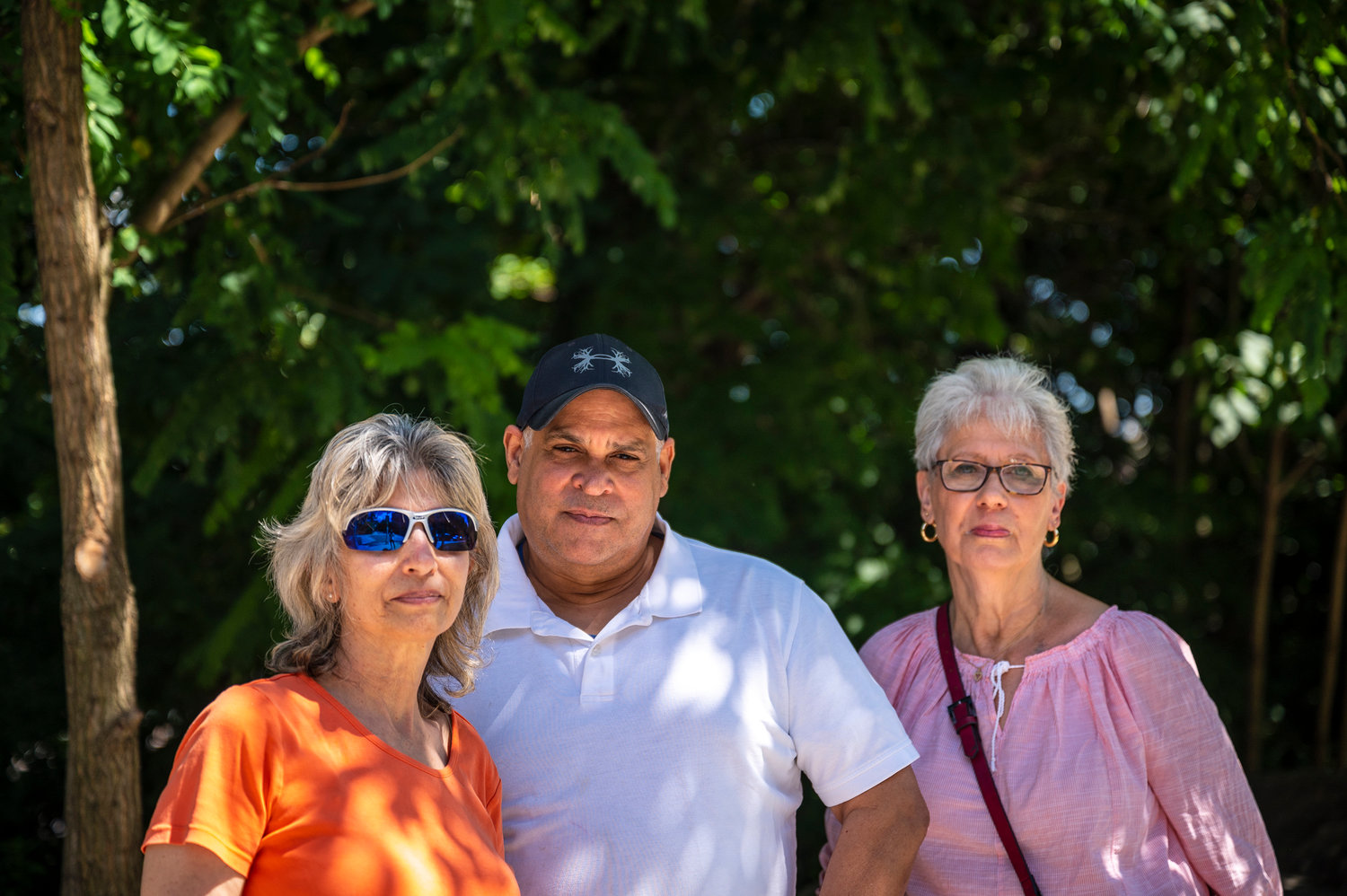 Joan Kaufman, president of the board of Waldo Gardens, left, has done everything in her power to help and secure the safety of her community. She doesn’t want to wait for an accident to happen for the city to implement new signs and rules against the scooters. Rafael Batista, a superintendent, and Annette Douglass, a resident 0who watches out for the dangerous traffic, look on.
Hiram Alejandro Durán 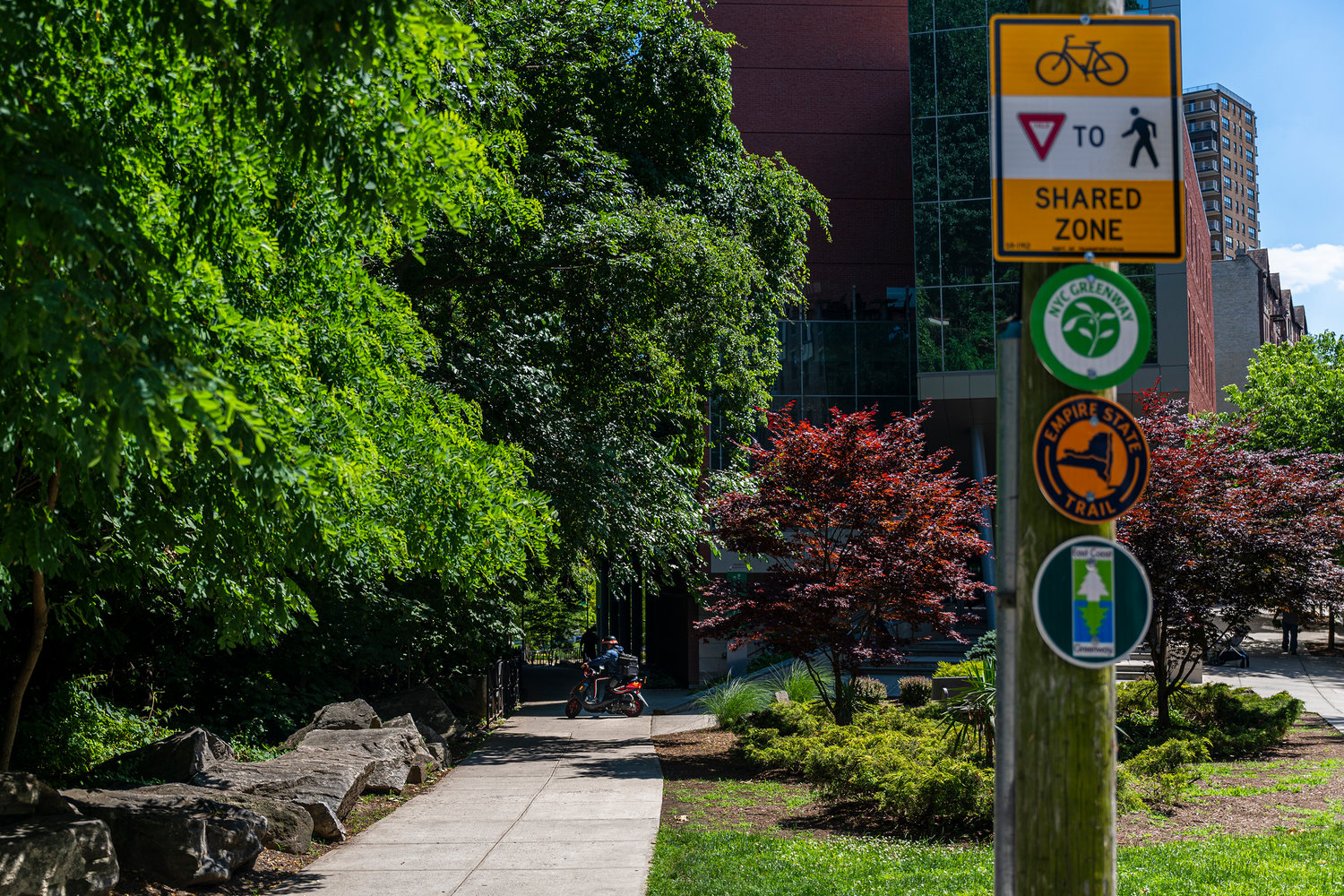 A scooter attempts to drive on the path towards Irwin Avenue, where residents from Waldo Gardens see them from their windows.
Hiram Alejandro Durán
Previous Next
By Stacy Driks

During the pandemic, customers happily depended even more on take-out deliveries leading to a sharp increase in delivery drivers. As lockdowns ended, more pedestrians returned to pathways only to find bicyclists, scooters and other motorized vehicles there.

Residents of Waldo Gardens at 3800 Waldo Ave. believe this situation is not working out. The “traffic” on the pathway between Irwin Avenue and Waldo Avenue near Manhattan College is causing uproar among residents.

During rush hour and on the weekends, delivery drivers on motor bikes or bicycles will use this pathway driving at the speed of “an accident waiting to happen,” said Joan Kaufman, board president of the Mitchell Lama co-op of Waldo Gardens.

Motorized bikes weave between pedestrians, making them afraid to walk the streets. Residents want a signage change — anything for their safety.

“Delivery people — they’re speeding,” Kaufman said. “It’s motorbikes and motorcycles. This is a perfect spot for them to come flying on Broadway.”

As these speedsters travel the passageway, the transportation department’s signs along the pathway caution pedestrians about bicyclists.

The pathway is accessible and convenient for people to travel between streets rather than going around Waldo Avenue, which is up a steep hill.

Kaufman is not the only one complaining. Nine of the co-op’s board members have made their voices heard.

“I’m always out there (building’s terrace) having my dinner, and that’s when I see everything,” said board secretary Annette Douglass.

According to Douglass , weekends after 5 p.m. are the worst.

Co-op board members told The Riverdale Press sometimes they are forced to jump out of the way as a motorbike drives past them. It’s too late for the pedestrians once they hear the noisy vechicles.

Kaufman is sensitive to this issue as she was once critically inured in a car accident.

“I’m not going to let one of these people get me,” Kaufman said.

Douglass stressed that once a cyclist almost hit her in the hip.

Board members claim the drivers go in different directions depending on the destination as the pathway connects to Broadway and Riverdale Avenue, which are main arteries in the northwest Bronx.

Going northbound, many delivery vehicles and bicyclists make a left as they approach Riverdale Avenue, then make a right southbound to get to Broadway. As they hit Broadway, they can travel on the newly paved bicycle lane near Van Cortlandt Park.

“This pathway (between Irwin and Waldo Avenue) was not meant for us; it was for the kids,” she said.

The board president’s fear started as she experienced people on all types of bikes speeding in front of Kelly Commons.

Eight years have passed since Kelly Commons was built. The five-story building was meant to be a haven for students and the public.

The pathway that was meant to be a good thing has become problematic and dangerous.

As co-op board president for over a decade, Kaufman searched for solutions for her safety, her neighbors, and the students.

She was in contact with Manhattan College, hoping for them to implement something but no luck. The school’s public safety department allegedly said there is nothing they can do.

Yet, their students have the opportunities to use this pathway as the college campus is nestled between restaurants, dorms, and Van Cortlandt Park.

“I think Ms. Kaufman is correct,” Assemblyman Jeffrey Dinowitz said. “The people must feel safe while walking around our community,”

Dinowitz sympathized with Kaufman as she expressed her concern. Dinowitz went the extra mile — literally from his office — and took a visit before his victorious primary last Tuesday.

“I am sympathetic to the functionality of this shortcut between Irwin Avenue and Waldo Avenue for bikes, such as those delivering food from our local restaurants,” he said. “But the fact is that our pedestrian areas need to be safe for all users.”

The assemblyman stressed that there is no excuse for people zipping by pedestrians on a shared lane at high speeds. He believed the city needs to take action to curtail the behavior.

Motorbikes are not only causing problems for these residents. All over the city there are sightings of vehicles going through red lights and simply rolling down the wrong direction of the street.

Via an email between the 50th precinct’s traffic team and Kaufman, the precinct ensured her that they would take care of it. The team claims officers are on standby and will be issuing tickets for violators and seizing unregistered scooters.

“The acting Bronx borough commissioner from DOT has told our office they are looking into measures of what kind of signage or other treatments could be implemented,” Dinowitz said.

Through the DOT’s efforts, they will be responsible for saving the residents from the problem of speeding motorized vehicles.

“My office and I will remain on top of this issue until we see some action taken by our city agencies,” Dinowitz said.