It’s not quite a festival, but it’s the next best thing 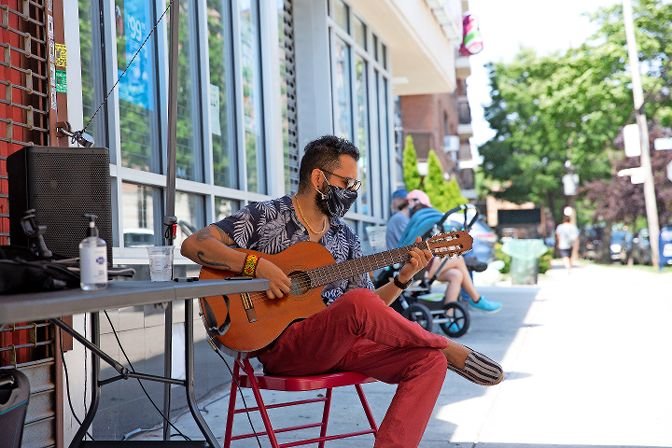 Sinhué Padilla Isunza, a Bronx resident and career musician, performs on Johnson Avenue on Aug. 2, as part of the first Open Streets Sundays. The program, run by the Kingsbridge Riverdale Van Cortlandt Development Corp., blocks off streets so restaurants and artists can set up stands in a socially distanced manner.
EIAN KANTOR 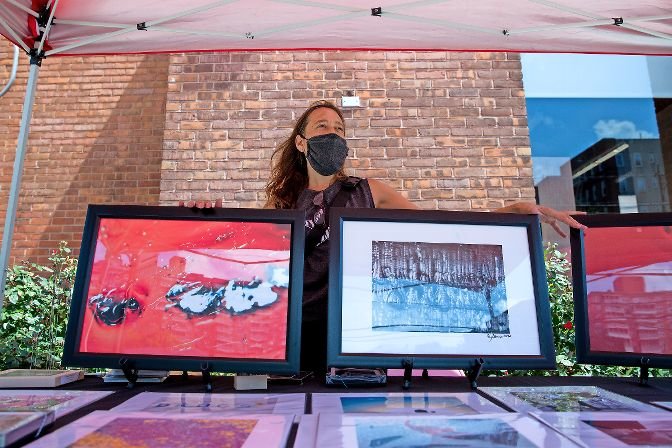 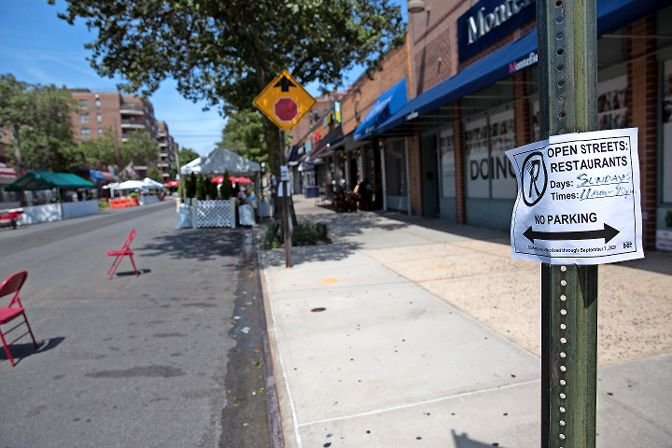 A sign details parking restrictions for Open Streets Sundays, a new program from the Kingsbridge Riverdale Van Cortlandt Development Corp., which permits restaurants and artists to set up socially distanced dining areas and stands each week through October.
EIAN KANTOR 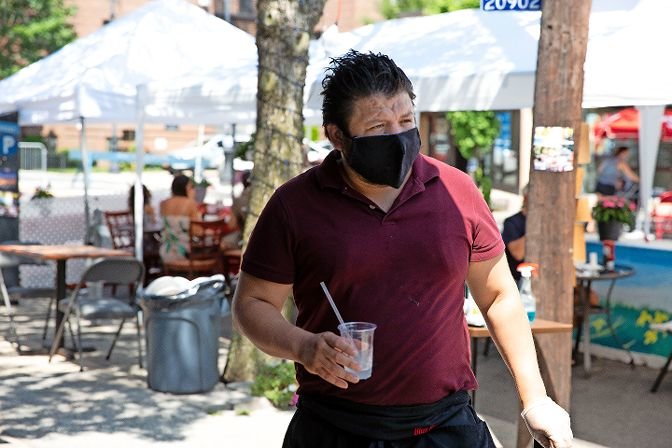 A customer walks down the sidewalk holding a cup from one of the restaurant stands on Johnson Avenue, which has become home to Open Streets Sundays through October. The weekly program is the idea of the Kingsbridge Riverdale Van Cortlandt Development Corp., allowing restaurants and artists to set up socially distanced stands.
EIAN KANTOR 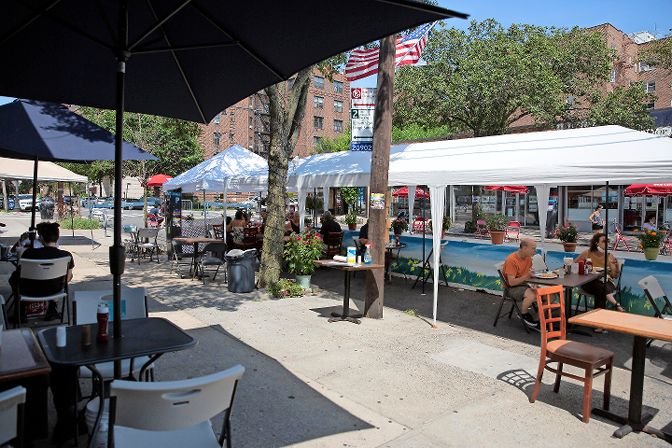 Sparse diners enjoy the shade of restaurant tents on Johnson Avenue on the first day of Open Streets Sundays, a program from the Kingsbridge Riverdale Van Cortlandt Development Corp., meant to provide socially distanced dining areas and stands for businesses and artists.
EIAN KANTOR
Previous Next

‘These old restaurants are the fabric of this neighborhood. We felt it was necessary to help them in whatever ways we could.’”
- Nick Fazio
By RAPHAEL LASSAUZE

Johnson Avenue, once sporting several festivals, has hit something of a snag in recent years.

The cancellation of the Johnson Avenue Block Festival in late 2018 — which ended in part due to a lack of funds — didn’t devastate the economic prosperity of the area. But it certainly left a bitter taste in the mouths of business owners and prospective customers alike.

Now, in the time of the coronavirus, it’s best to have fewer people in a packed space, even if volume can make a difference in keeping some economically ravaged businesses afloat, especially those in the popular business district on the southern edge of Riverdale.

Nick Fazio, the incoming chair of Community Board 8’s economic development committee, hopes efforts are put in place to keep those locations alive.

“Those old restaurants are the fabric of this neighborhood,” he said. “We felt it was necessary to help them in whatever ways we could. So back in June, we got word of an Open Streets program and immediately jumped at it.”

Open Streets is a program managed by the city’s transportation department, initially conceived as a way of providing some additional outdoor space when the city was suffering through the worst of the coronavirus pandemic last spring. Because fewer cars were on the road, many had pushed Mayor Bill de Blasio to shut down streets, instead making them pedestrian friendly for large sections of particular days.

Although the city and state have significantly dropped coronavirus cases to some of the lowest in the country, the city decided to expand the program, splitting it into three. The original Open Streets continues, transforming a stretch of street or avenue into an open-air walkway without cars. Open Restaurants allows eateries to erect tables and dining set-ups on sidewalks. Open Streets for Restaurants combine the two.

“We got on a Zoom call with everyone and looked into how we’d be able to facilitate public activities,” Fazio said.

“After we determined that Johnson Avenue — specifically between West 235th and 236th — would be the best place, we had to see if it’s what the businesses actually wanted. For the most part, it was.”

Making it happen, however, was a little more complicated. In order to qualify for the program, a sponsor is needed, usually a merchants association or chamber of commerce. The problem, Fazio said, is Johnson Avenue doesn’t have such a group.

That’s where the Kingsbridge Riverdale Van Cortlandt Development Corp., stepped in. Although the community nonprofit shut down at the beginning of the pandemic in March, KRVC began rolling out grab-and-go food services as well as jumpstarting its virtual art gallery.

By July, KRVC and executive director Tracy McCabe Shelton was as busy as ever.

“They started rolling out those programs in July,” Shelton said. “And we just started figuring it out. There was a lot of back and forth with the community board, elected (officials) and residents while we filled out the application, but everyone came through. In fact, the DOT fast-tracked it. We got the confirmation for the first Open Streets Sunday a week prior.”

The job of an Open Streets sponsor, according to Fazio, is extensive. KRVC had to present diagrams taking into account every aspect of the event — especially when it came to maintaining strict sanitation protocols required in the wake of the coronavirus pandemic. That included table placement as well as efficient trash pickup, and having the health department’s numbers for each restaurant.

“This isn’t the Johnson Avenue Block Festival,” Fazio said. “We’re not having face painting, none of that. We’re just trying to have something enjoyable for the summer and into the fall and help these businesses.”

Some of the other restaurants, including Blue Bay Restaurant, Bella Notte, Palace of Japan and others, worked with KRVC to get everything done right.

“We had to put it together very quickly,” Shelton said. “But we did it correctly. We got performers and artists together and talked them through the safety measures. We got volunteers together to put up tents and clean tables.”

Despite following strict guidelines, there are those who may continue to have concerns over the idea of many people gathering in a closed-off area for food and drinks. One of those people is Seth Nicholson, who accepted an invitation by KRVC to perform on Johnson Avenue.

“I’ve been around here a long while,” Nicholson said. “Me and Eric Sullivan played all the time at An Beal Bocht together and have so many new projects in the works, which were stalled because of COVID.”

“At first I was kind of concerned about the whole social distancing thing, but Linda detailed all the guidelines and policies and masks and stuff, and I felt a lot better about it,” Nicholson said. “To perform again in front of people safely is what I’ve been asking for since this started.”

It was a sight much appreciated by Assemblyman Jeffrey Dinowitz, who often enjoys taking a stroll through the area. That is, as long as people are being careful.

“I just went there to talk to people, that’s what I like to do,” Dinowitz said. “It was fun. People were wearing masks, there was no bad behavior. I’d say this was very successful so far.”

Open Streets Sundays on Johnson Avenue were initially scheduled to run through Sept. 6, though an extension now permits the event to run though the end of October. While that may keep businesses and people looking forward to Sundays, Dinowitz hopes it doesn’t stretch itself too thin.

“People will continue coming out, I’m sure,” Dinowitz said. “It’s a lot of work, but it’s worth it.”