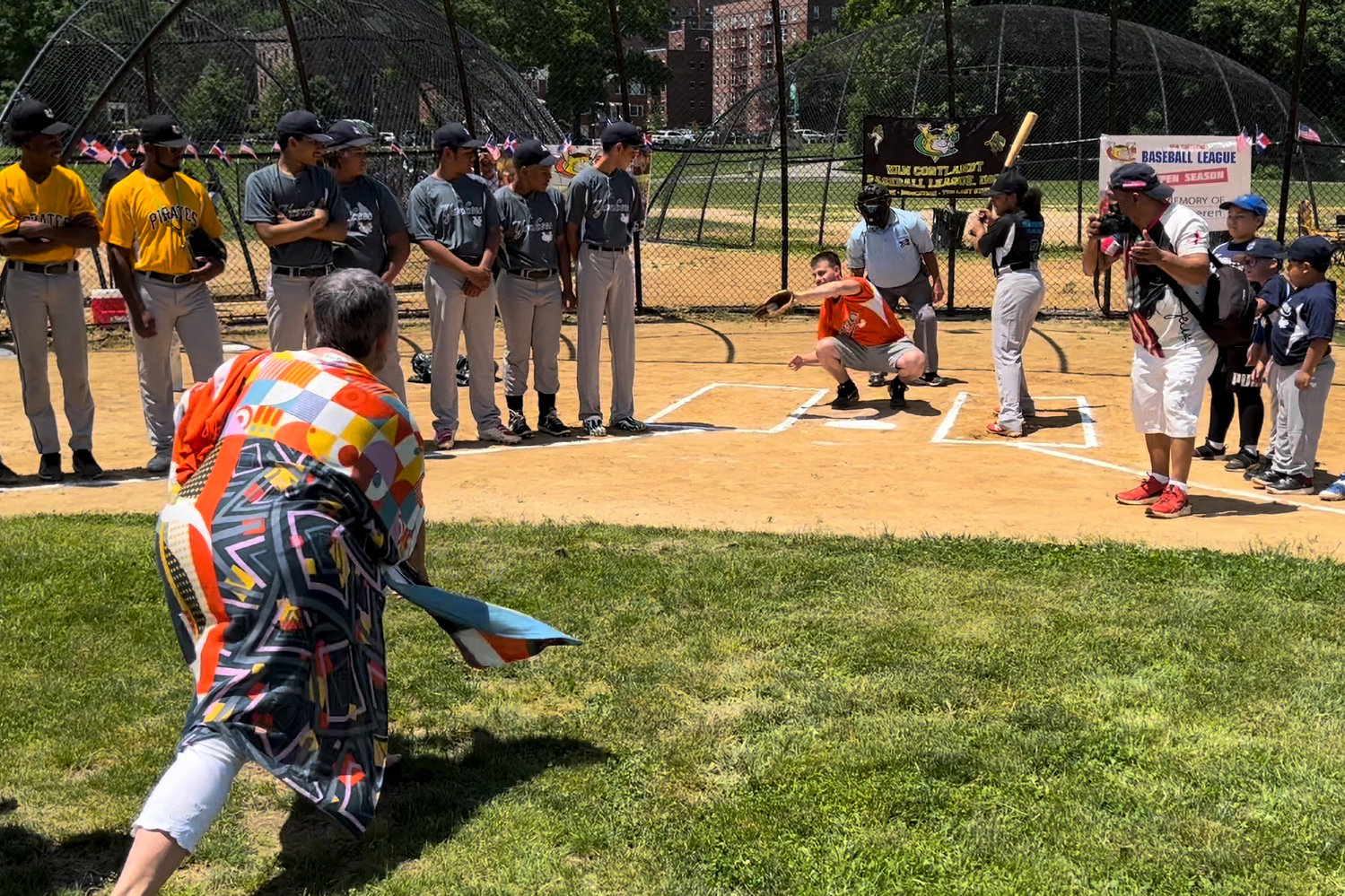 Deb Derella Cheren threw out the first pitch for opening day of the Van Cortlandt Park Baseball League on Saturday, June 4. A GoFundMe set up in her late husband Ivan’s honor is helping local baseball families afford the costs of travel, equipment and private lessons.
Courtesy of Debra Derella Cheren 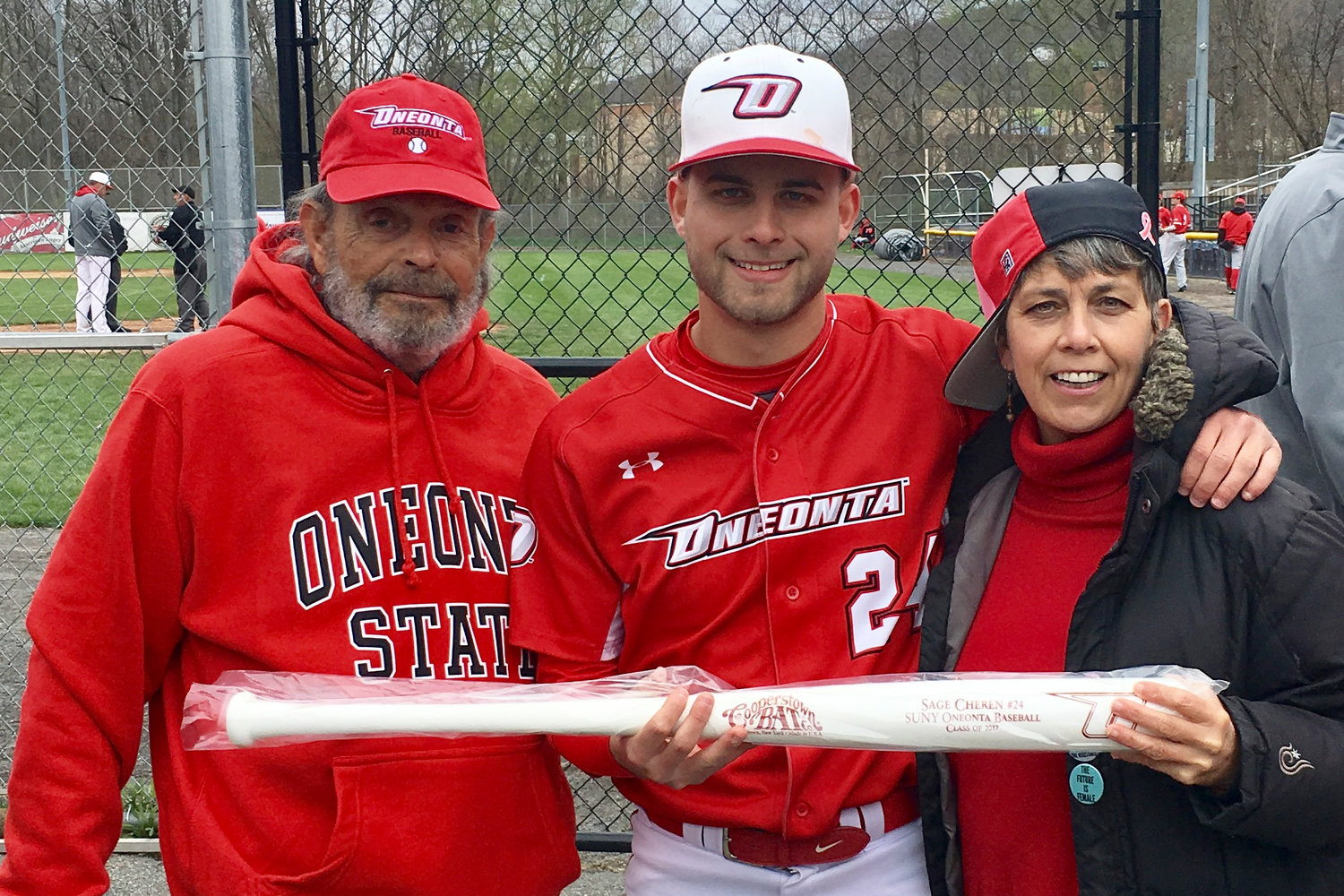 Ivan Cheren (left) and Deb Derella Cheren (right) pictured with their son Sage (center) after his last college game for SUNY Oneonta in 2017. Sage is now 27 years old and works in the real estate industry. But before that, he made countless memories watching and playing baseball with his father Ivan.
Courtesy of Debra Derella Cheren
Previous Next
By Pete Janny

Ivan Cheren loved baseball so much he couldn’t stay away from the local fields around greater Riverdale. And those who came to know of him recall his presence wherever the nearest crack of the bat was heard. His folk-like stature was made for a starring role in a baseball movie. But to Ivan, baseball was about so much more, including giving back to others.

Two years after being diagnosed with dementia, Ivan passed away in January of this year. His wife, Debra Derella Cheren, has kept her husband’s legacy alive with an online crowdfunding page aimed at supporting young ballplayers in the community.

Providing gloves, bats and training sessions with a former professional baseball player are a few of the good works made possible by the fund. She has raised just shy of $15,000 so far.

“Ivan was a true creative and such a humanitarian,” Debra says. “And he really loved kids.”

Ivan became a familiar face at local fields dating back 20 years when he and his friend Mark Sherman started organizing baseball camps for the local youth. Word quickly spread and the two friends shuttled in eager ballplayers from as far as Morningside Heights.

“We decided to start a baseball camp because there was a lack of training for kids in the local leagues,” Sherman said. “It was our baby for 12 years.”

Although Salcedo was originally from the Dominican Republic, he had a family connection to Riverdale. His cousin is Pedro Alvarez, a former baseball star at Horace Mann school who was a infielder for Major League Baseball’s Pittsburgh Pirates and Baltimore Orioles  for nine seasons.

“He was always looking for ways to use his baseball skills.” Sherman said of Salcedo. “So we hired him as an assistant coach.”

Ivan was in charge of the marketing and finances for the camp. But he also enjoyed getting in on the action himself, including running around the outfield for a few hours to retrieve fly balls.

“He lived his life with love and gratitude and all about giving and helping the kids,” Sherman said. “He helped a lot of kids in need.”

Ivan and Debra have one son together, Sage, whose earliest memories were bonding over baseball with his father. Ivan would coach Sage during those youth baseball camps he helped organize. Sage went on to play at Riverdale/Kingsbridge Academy before playing college baseball at Westchester Community College and SUNY Oneonta.

According to Debra, nothing made Ivan prouder than watching his son play the sport they both loved.

“I think it was the thing that brought them together,” Debra said. “They bonded incredibly.”

Debra has reserved a portion of the money raised from the GoFundMe to help pair families with Salcedo for training sessions. She is quick to recommend the services of Salcedo, whom she and Ivan consider to be part of their family.

“He’s really been the one who’s brought the families to me telling me their kids could use help,” Debra said of the trainer.

Salcedo was discovered by scouts from the Los Angeles Dodgers in 1990 as a 17-year-old right-handed pitcher. After stints in the Dodgers and Milwaukee Brewers’ farm systems, Salcedo retired from pro baseball in 2002 and has since then dedicated his life to helping future generations of baseball players.

“Not everyone can teach kids how to play baseball,” Salcedo told The Riverdale Press. “I guess it’s something God gave me to help others.”’

The work being done by Debra means a lot to baseball families who are burdened by the costs of travel, equipment and private lessons. They are hopeful their kids take the lessons they learn from Salcedo and run with them.

“He loves the game and respects the game and he wants children to also feel that way too,” said one parent whose two sons train with Salcedo. “He considers my kids to be his.”

Rob Agredo and his family moved to Riverdale when his daughter Sam was 4 years old. She started playing baseball when she turned 6. Sam, now 15, still deals with pressure and criticism for being the only girl on her team. When Sam was chosen as a beneficiary of the GoFundMe funds, her father was touched by the generosity of the Cheren family.

“To have people who are not directly involved with my kid but hear her story and sympathize to the point where they would actually reach out to me is incredible,” Agredo said. “It gives me an opportunity to give my kid that extra push that she feels that she needs to keep up and to play the game she loves.”

Baseball is interwoven with Riverdale and the community.

“You can hear and feel baseball going on all the time,” Agredo said.

And Ivan Cheren wouldn’t want it any other way.