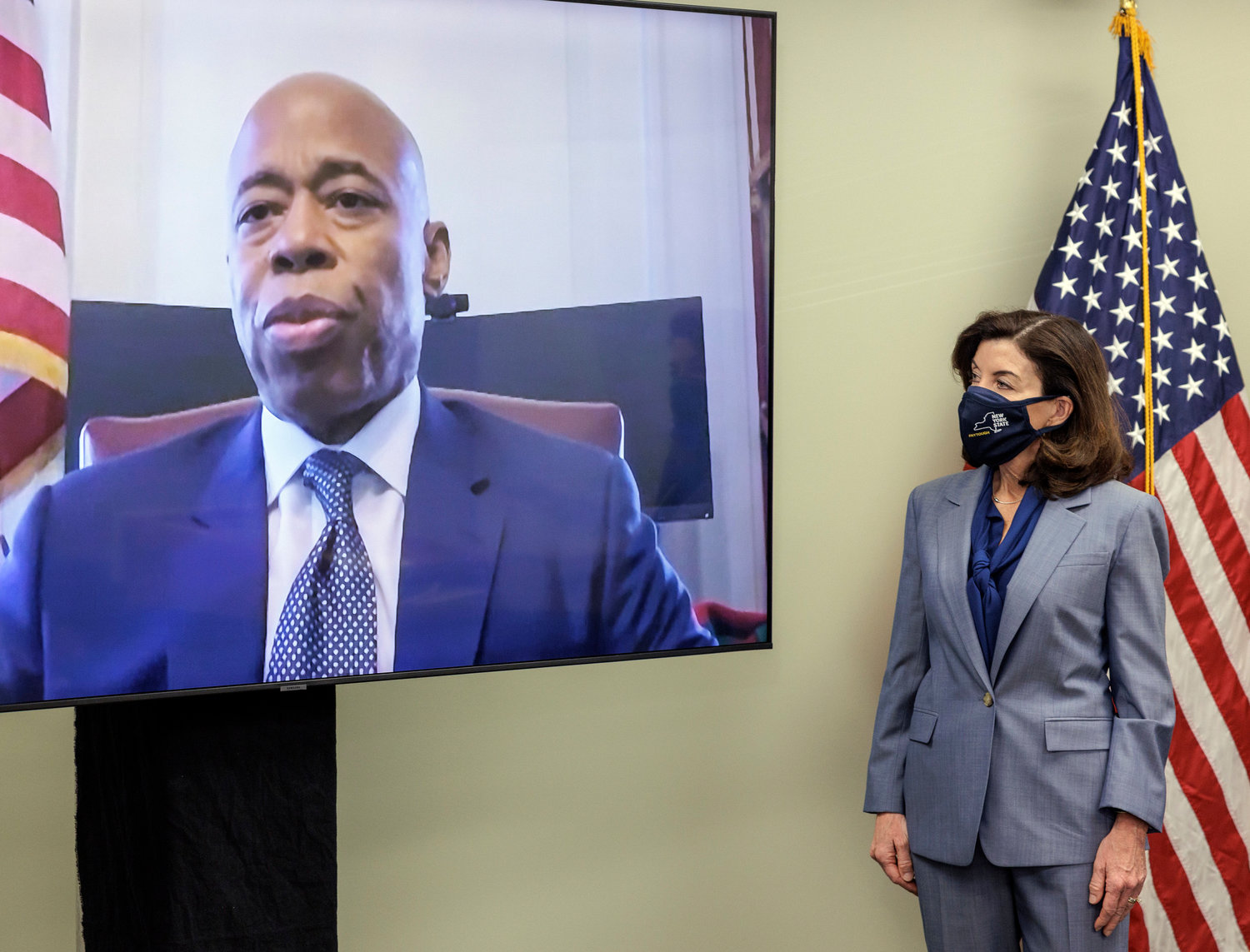 Mayor Eric Adams nor Gov. Kathy Hochul may not have been in office at the start of the coronavirus pandemic, but they've been tasked to carry on the battle against the disease. While they might claim victory over the latest wave of the omicron variant, they warn more waves could be in the future.
Courtesy of Gov. Kathy Hochul/Mike Groll
By MICHAEL HINMAN

Gov. Kathy Hochul spent Monday at the White House, joining her counterparts across the nation in meetings with both President Joe Biden and Vice President Kamala Harris. Yet, back home, there has been days — maybe even weeks — of good news on the COVID-19 front as New York appears to have weathered the worst of the omicron surge.

For the first time since early November, total hospitalizations (7,191) outpaced new coronavirus infections (5,115) in New York on Monday, according to numbers released by Hochul's office. While such data would typically be alarming — considering where infections and hospitalizations were just a month ago in the state — public health officials see this as good news.

"We are closing the month in a better place than we started," Hochul said in a statement. "We're still not through this winter surge, and I encourage New Yorkers to continue using these tools to help keep our communities safe and our schools and businesses open. Please get the booster dose if you haven't already. Get your children vaccinated and boosted when they're eligible. And continue to mask up."

Vaccinations did creep up during the omicron surge, especially in New York City, which grew its total vaccinated population from 76 percent on Dec. 1 to just over 82 percent on Monday. Statewide has been a bit more challenging, with growth from just under 69 percent to about 74 percent now.

Boosters have been more problematic, with just a quarter of New York City's population getting that extra shot by the end of January. That's all in the wake of nearly 2.1 million confirmed cases of the coronavirus since Dec. 1 — reflecting 11 percent of the state's total population. Unlike the original coronavirus and the delta variant afterward, hospitalizations did not keep pace — peaking at about 7 percent of all infections by New Year — which many health experts credited to high vaccination rates.

Still, nearly 66,000 people were sent to the hospital since the beginning of December — stressing a statewide system with just 35,000 beds in the first place — and led to the death of 6,304 people, including 471 in the Bronx. That was nearly 10 percent of the state's total deaths, all happening over the course of just two months.

Even with many public health experts warning there could be more waves and more variants in the future, Hochul is setting her sights on life after the pandemic. At the White House on Monday, she pushed Biden and Harris to fight harder for a so-called "economic competitive package" that would not only build new industry — like in semiconductors — but also help float the state financially as it recovers from COVID-19.

"I am encouraged by the federal government's actions to ramp up access to promising antiviral treatments, and to provide staffing support to hospitals and health care facilities," Hochul said, in a statement. "Additionally, my fellow governors shared concerns about rising inflation, and I am focused on ensuring New Yorkers can thrive in this economy."

At its peak in early January, the number of daily new cases in New York topped 90,000, while hospitalizations climbed to over 12,600. But as quickly as the omicron wave surged, it dissipated. Within a week, new infections were nearly cut in half to just under 48,000, and within a couple of days, new cases had plummeted to 27,000.

Those requiring intensive care — or worse, intubation on a ventilator — did not climb anywhere near the same rate. In fact, it didn't climb much at all. At its peak Jan. 12, hospitalizations more than quadrupled from the beginning of December. ICU admissions and intubations, however, rose at half that rate.

With all of that back to near pre-surge levels, city officials are working to keep those numbers that way.

"We must continue to do all we can to prevent needless suffering and death caused by COVID-19," city health commissioner Dave Chokshi said, in a release, while promoting monoclonal antibody treatments and antiviral pills. "These treatments — combined with high-quality masks, vaccination, testing and our public health precautions — help us defang the virus and keep New Yorkers safe and healthy."