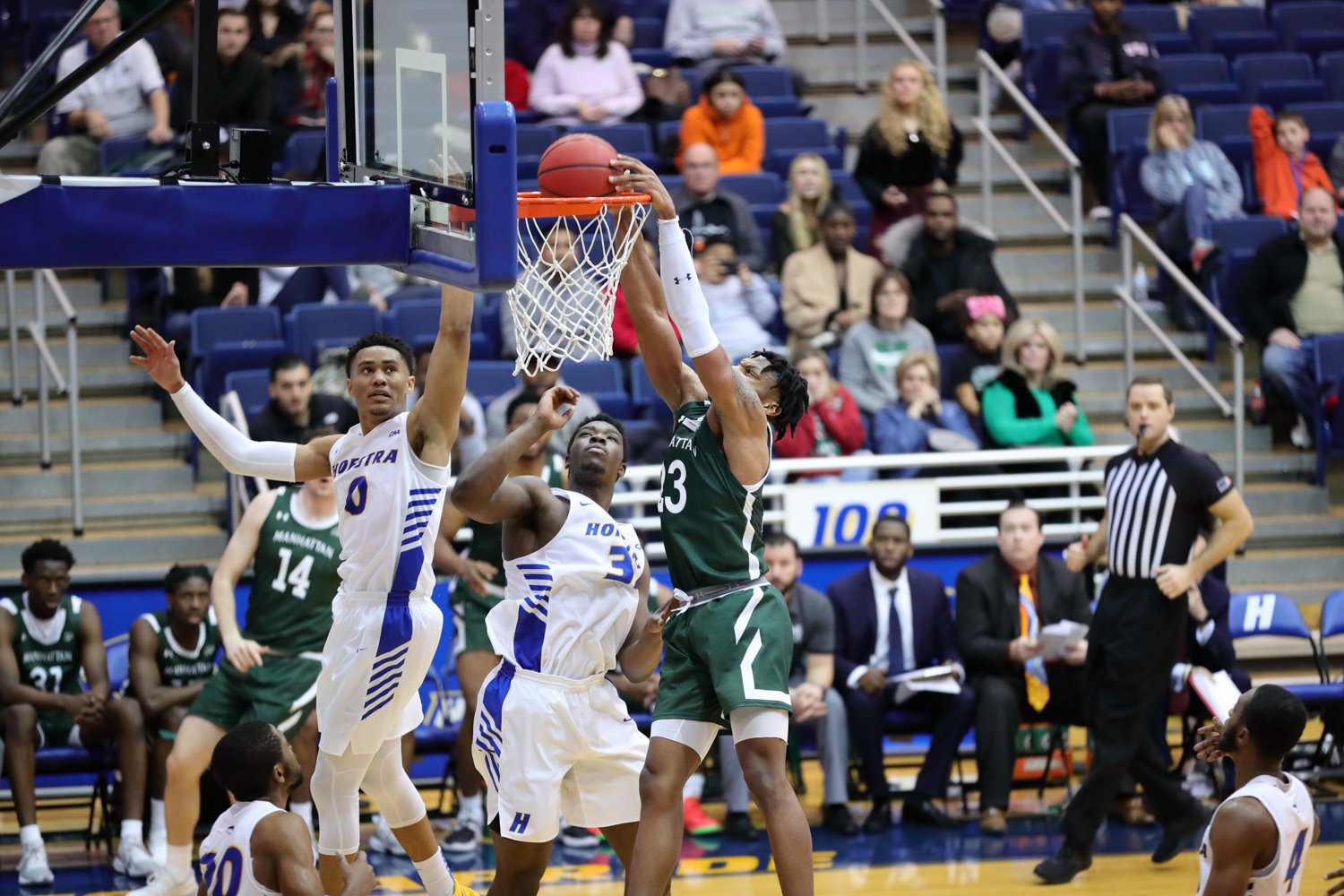 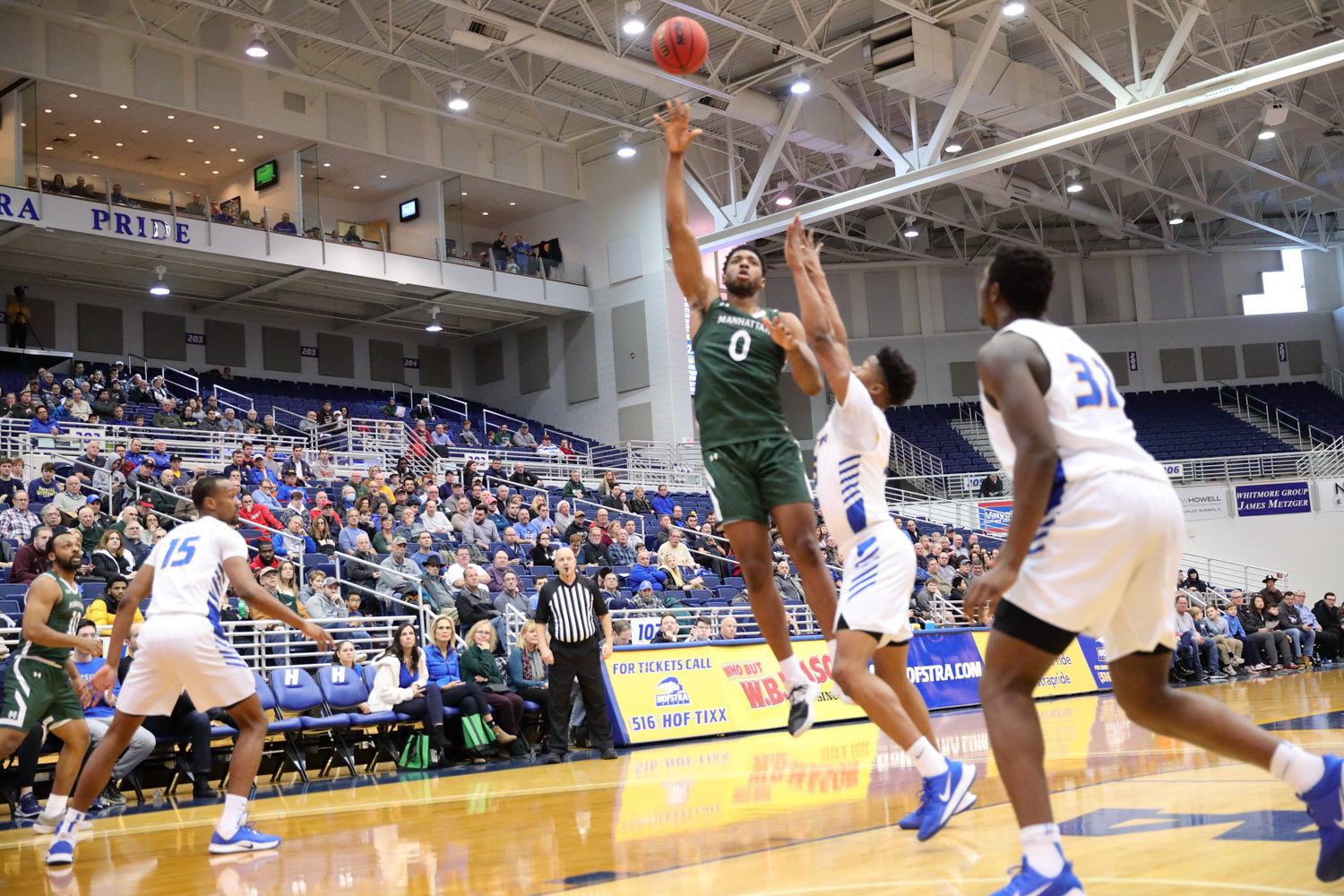 Manhattan sophomore Tykei Greene logged 13 points and seven rebounds in a win over Canisius, before erupting for a game-high 21 points in a victory over Niagara.
Courtesy of Manhattan College
Previous Next
By SEAN BRENNAN

The Manhattan College men’s basketball team bus was still a couple hours away from home as it chugged down the New York State Thruway last Sunday night after a weekend in Western New York.

There was no blaring music. No loud celebrations. No evidence at all about what the Jaspers had pulled off to open the Metro Atlantic Athletic Conference season.

“We just stopped to get some Friendly’s ice cream,” Jaspers’ head coach Steve Masiello said. “It’s a low-key trip home. Some of the guys are sleeping.”

Quiet celebrations are just fine by Masiello, especially when they come after a 2-0 weekend upstate with Manhattan posting a 71-67 victory over Canisius Friday before completing the weekend sweep with a 67-62 win over Niagara.

The Jaspers are now 6-5 overall on the season, 2-0 in MAAC play after a road trip that is considered the toughest of the conference season.

“Any time you win on the road in conference play, it’s important,” Masiello said. “To start out conference play with this trip, I mean, you see it on the schedule and you know it’s there. You get tested right away.

“So it makes you feel good about your non-conference schedule in the sense that it got us ready for the road in conference play.”

The two road wins marked the eighth time in the last nine games the Jaspers have played away from Draddy Gym. In fact, eight of Manhattan’s 11 games this season have been on the road. But the Jaspers’ road warrior mentality has them off to a fine start to conference play.

In the Niagara win, it was Green taking top scoring honors with a game-high 21 points, while Paulicap (16 points) and senior Tyler Reynolds (11) also notched double digits.

For a team that didn’t have a single player average in double figures last season, the scoring balance was a huge development for the Jaspers.

“That’s nice to see,” Masiello said. “Warren leads us against Canisius, and against Niagara it was Pauly and Tykei. So it’s not like you have one guy kind of carrying you. It’s spread out, good team basketball with high assist numbers. Those are all good things.”

But with any Manhattan team under Masiello, it all comes down to defense, and last weekend the Jaspers held Canisius to 40 percent shooting from the floor and just 20.8 percent from three-point range. They then limited Niagara to 39 percent from the field while out-rebounding the Purple Eagles 41-34.

“It’s great to know that your identity as a team, one that’s playing a lot of sophomores, that they understand who we are,” Masiello said. “They have bought into doing the things that we believe can make us successful, and that’s on the defensive end. So it’s nice to know that we’re winning playing a brand of basketball that has been very successful for us over the years.”

The Jaspers last played at home on Dec. 14, and only twice since Nov. 16. But Masiello believes there are benefits from hitting the road so often early in the season.

“I think it hardens you, in a good way. It makes you a little tougher, in a good way,” Masiello said. “Sometimes, at home, you’ll get some buckets and runs off of energy from just being at home where you have the crowd and the students. But we haven’t really had any of that this year because we’ve been on the road for eight of our 11 games. So everything we’ve done has kind of been earned. So I think it’s helped with our focus and keeping everything very business-like.”

A 2-0 start to conference season is reason for optimism, but what really excites Masiello is the potential of his sophomore class of Williams, Greene, Stewart, Christian Hinckson and Elijah Buchanan. He sees it as the building blocks for success this season and beyond.

“These guys have been handed alpha roles from Day One,” Masiello said. “But it’s nice to know that they’re getting better, they’re improving, and they’re showing progress.

“I think the sun is very bright in Riverdale with this sophomore class.”