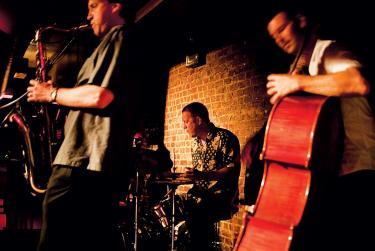 “Let’s get a heartbeat here,” said drummer Joe Farnsworth between sets at Ibiza Lounge. Thursday nights at the club are now devoted to jazz, and Mr. Farnsworth is determined to make the club the beating heart of the music in the Bronx.

Last Thursday, Mr. Farnsworth took the stage with renowned tenor saxophonist Eric Alexander, bassist John Webber and alto saxophonist Mike DiRubbo at Ibiza. The walls were covered with white sheets and umbrellas leftover from the previous week’s “White Party Affair,” a club night where everyone was supposed to dress in white. The four jazzmen seemed a little out of place. Not only were they in a borough where most of them hadn’t played, they were in a space known for wild Latin dance parties, not bebop or blues. But when Mr. Farnsworth called out the first song, “Blues for Rosaline,” the band started playing and nothing else mattered. The music transformed the room into the type of jazz club traditionally found only in Manhattan.

“Any place the people are interested in the music and they enjoy what we do, we’re happy, because we love to play,” said Mr. Alexander, a renowned tenor sax player who won Artist of the Year in JazzWeek in 2003.

According to the website “All About Jazz,” Mr. Alexander “is quickly becoming a ‘voice to be reckoned with’ on the tenor saxophone.”

He plays regularly downtown and overseas, most recently in Holland and Japan.

As a professional musician, he said that he spends about 50 percent of his time away from his home in Riverdale, where he came six years ago to start a family. Mr. Alexander has two boys who attend PS 24, and it was through the school that the shows at Ibiza began.

In February, Mr. Alexander and Mr. Farnsworth, who has kids in PS 24 as well, were asked to do a benefit show for PS 24 at Ibiza. After the benefit, the club’s owner, Frank Goris, asked them if they would like to play a regular show on Thursdays. They agreed, and every week since May 6, a different lineup of friends and or locals has been up on stage.

“We always used to find spots in our neighborhood wherever we lived. Now with kids and families, it’s in Riverdale,” said Mr. Farnsworth.

The two principals have been playing together for years. With Mr. Webber and three others, they make up a band called One For All. Since 1997, One For All has released 14 albums. The AMG Music Guide calls them, “A top-notch all-star hard bop sextet” and, “One of the foremost mainstream jazz ensembles.” The band has a new record out this year titled Incorrigible.

BOOK BAG: Authors trace many paths on the way to 'America's Promise'