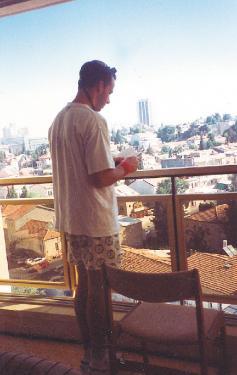 J.J. GREENBERG pictured here in Jerusalem in 1993 while on vacation with his family. Photo courtesy of the Greenbergs

Blu Greenberg and her husband, Rabbi Irving "Yitz" Greenberg, remember the hectic few days following the accident that claimed the life of their son.

Amidst the pain and loss that came with his sudden death they made a controversial choice.

Both leaders in the modern Orthodox Jewish community, the Greenbergs decided to donate J.J.'s organs. In doing so, they placed themselves in the midst of an ongoing debate over whether or not the practice of organ donation is permissible under Jewish religious law - and if it is, then how it should be done.

Two other Riverdalians who became living donors - and share the same religious views as the Greenbergs - were recently honored by the Riverdale Jewish Community Center. James Lapin was recognized for donating his kidney, and Dr. Judah Schorr was noted for donating bone marrow.

Not all Orthodox Jews recognize the religious law that makes organ donation acceptable - but those who do say the need for vital organs around the world is so acute that the debate is truly a matter of life and death.

It became personal for the Greenbergs in September 2002.

While riding his bicycle through the streets of a town in northern Israel with a friend and one of his brothers, David, on a Friday morning, J.J. was struck by a car and gravely injured. He was transported from a local hospital to another one in Tel Aviv, where doctors struggled to save him.

David had the agonizing task of telling his parents that J.J. had sustained severe brain damage. By 11 a.m. Friday morning in New York, the Greenbergs knew that the future looked bleak for their son.

"About a half an hour after this, our son David called us, and he said, 'You know, I hate to ask you this now,'" said Ms. Greenberg. "He said, 'after they get the results of the test, which don't look good, they may ask you if you would consider organ donation.'"

Because the Sabbath was approaching - for observant Jews, making phone calls is forbidden from sundown Friday until sundown Saturday - they had a limited time to make their decision.

Ms. Greenberg said that through the shock of losing their son, it only took them three minutes to sort through issues of religious law and what J.J.'s wishes would have been.

Rabbi Greenberg says their interpretation of the law stems from the work of Rabbi Yechezkel ben Yehuda Landau, an influential 18th-century Jewish theologian, who ruled that an autopsy could be permitted if performed as an immediate action to protect another life.

Since the Greenbergs believe Jewish law holds saving life above any other consideration, and because they believed J.J., known for his generous nature, would have wanted to give a final gift, several of J.J.'s organs went to save the lives of others.

"It sounds crazy to say because there's no redeeming feature when you survey the staggering extent of the loss," Rabbi Greenberg said, "[but] in a way, what occurred to me is, at least some good can come of what's a total disaster. In other words, that someone else could be saved, or helped."

"And so the thought that, in other words, the emotional recoil I presume that traditional Jews are supposed to have at the thought of giving my, of giving an organ, I didn't have, never had," he said.

According to one expert, the Greenbergs' donation was especially needed in Israel. Robby Berman, executive director of the Halachic Organ Donor Society (HOD), a nonprofit organization dedicated to advocating organ donation in accordance with Jewish religious law, or halacha, says that the rate of organ donation is especially low in Israel.

Citing statistics from the Israeli transplant authority and the United Network of Organ Sharing, Mr. Berman said that in overwhelmingly Jewish Israel, about eight percent of the population indicates a willingness to have organs harvested after death - but in other Western countries, the donor rate is closer to 35 percent.

Though there are no statistics kept on the rate of organ donation by religion, Mr. Berman said it is the belief, he called it a misconception, that organ donation is unacceptable under Jewish law that accounts for the difference between Israel and much of the rest of the Western world.

Beyond the acceptability of donation after death is another question, Mr. Berman said - the definition of death itself.

Recognizing the difference, his organization distributes organ-donor cards that allow the bearer to define when his or her organs can be donated.

"HODS does not take a position on brain death," said Mr. Berman. "It recognizes that there is a significant debate, based on the … Talmud, on whether or not a person is alive or dead."

Mr. Berman points out that though HODS singles out Jews to donate, he advocates donating to anyone in need, regardless of religion. His organization also provides rabbinical consultation to Jews considering donating a kidney, bone marrow, or other parts of their bodies while still alive. Mr. Lapin, who donated a kidney to a woman who lives upstate, said he got the idea to do so after hearing Mr. Berman speak.

Mr. Lapin said he receives a positive response when he tells people he's a donor, and keeps in touch with the woman who received his kidney.

"We lovingly call it 'the little guy.' I think the recipient made up the name," Mr. Lapin said.