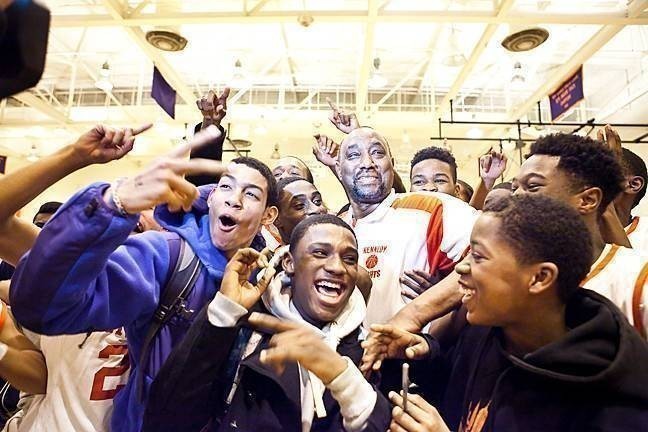 The chant broke out about halfway through the third quarter when it became clear John F. Kennedy (JFK) basketball coach Johhny Mathis was going to finally notch career win 600.

“We want cake. We want cake,” a packed crowd chanted as the Knights dominated the Herbert H. Lehman Lions on Dec. 12.

The JFK faithful would not only get their cake; they would eat it, too.

When the buzzer sounded with JFK on top 53-31, Mathis, a gentle giant, was the only one still seated in the arena named for him.

In a demonstration of affection and respect, JFK students, fans and friends of Mathis rushed the court — if it were possible to make a 6-foot-7-inch man disappear, they almost did so among hugs and handshakes and backslapping.

“I’m real excited to get this one,” said Mathis, who has coached boys’ basketball at JFK for 27 years. “I really think the younger guys and the bench made this one possible.”

The adoring fans soon shared cake and the sweet taste of victory. Student volunteers, Mathis and his son J.C. Mathis, an assistant coach and a member of JFK’s 2000 PSAL Championship, presided over the cutting of a huge cake celebrating the milestone victory.

Mathis stood at the 600-win threshold for a week as the Knights played poorly in their two previous games, losing badly to the Eagle Academy for Young Men and then to Thurgood Marshall Academy.

Mathis recalled his first victory as head basketball coach at JFK. “I started off so badly,” he said. “I think we lost our first five games. I finally got my first win against Morris High School,” he said.

Mathis’ teams have unofficially won about 75 percent of their games since that time over his long tenure.

The latest victory brings JFK, who play in the Bronx AA Division, to 2-2 on the season.

“It means the world to me that we could get it for him tonight at home,” said Arias. “He’s been a great coach and he’s been like a father to me.”