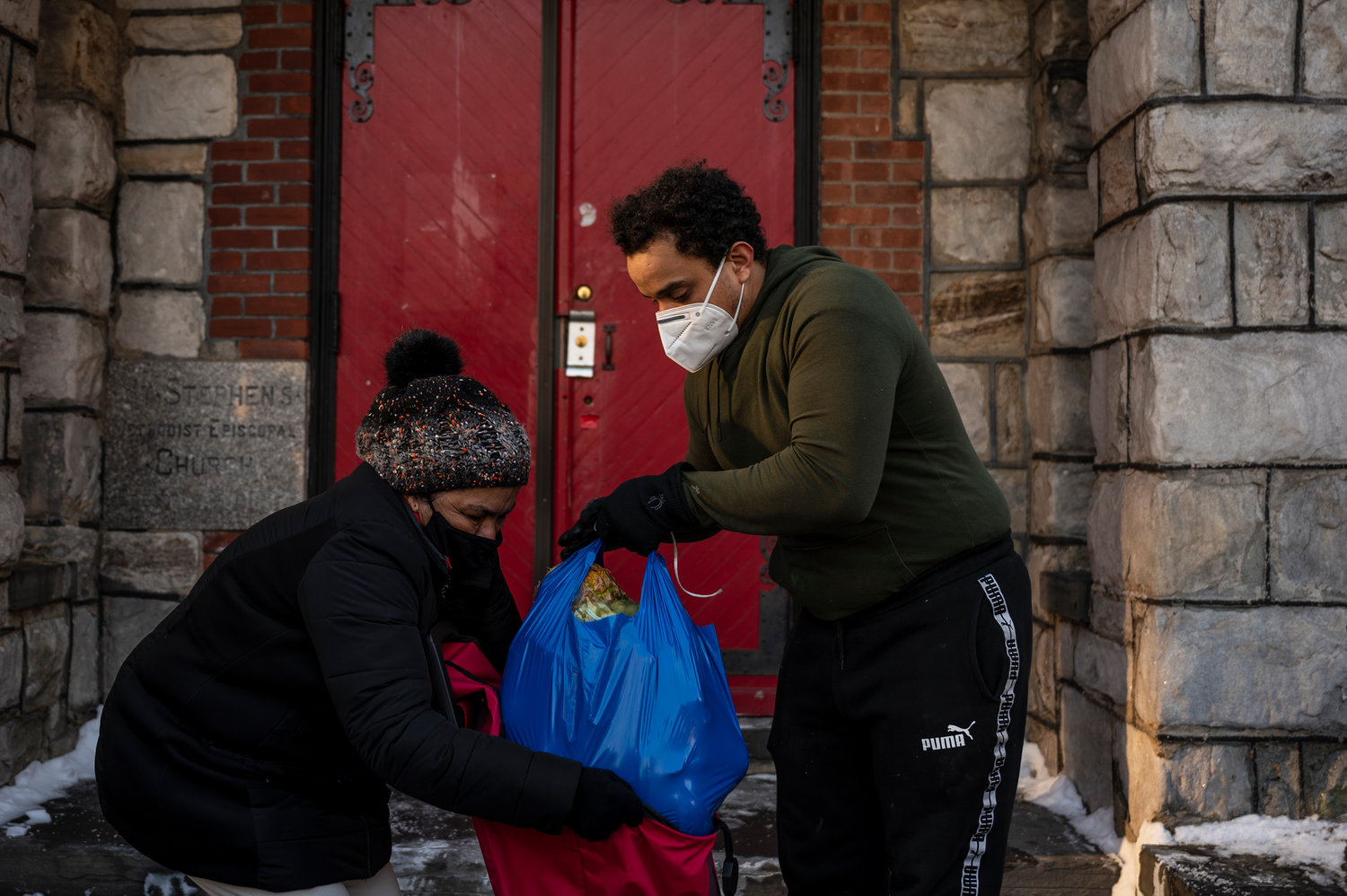 Many of the food essentials are collected for the Marble Hill pantry at St. Stephen’s United Methodist Church. Organizers hope to have this space for some time to come, but how much money they can raise — and what the church’s next pastor will want — all makes a difference.
Hiram Alejandro Durán 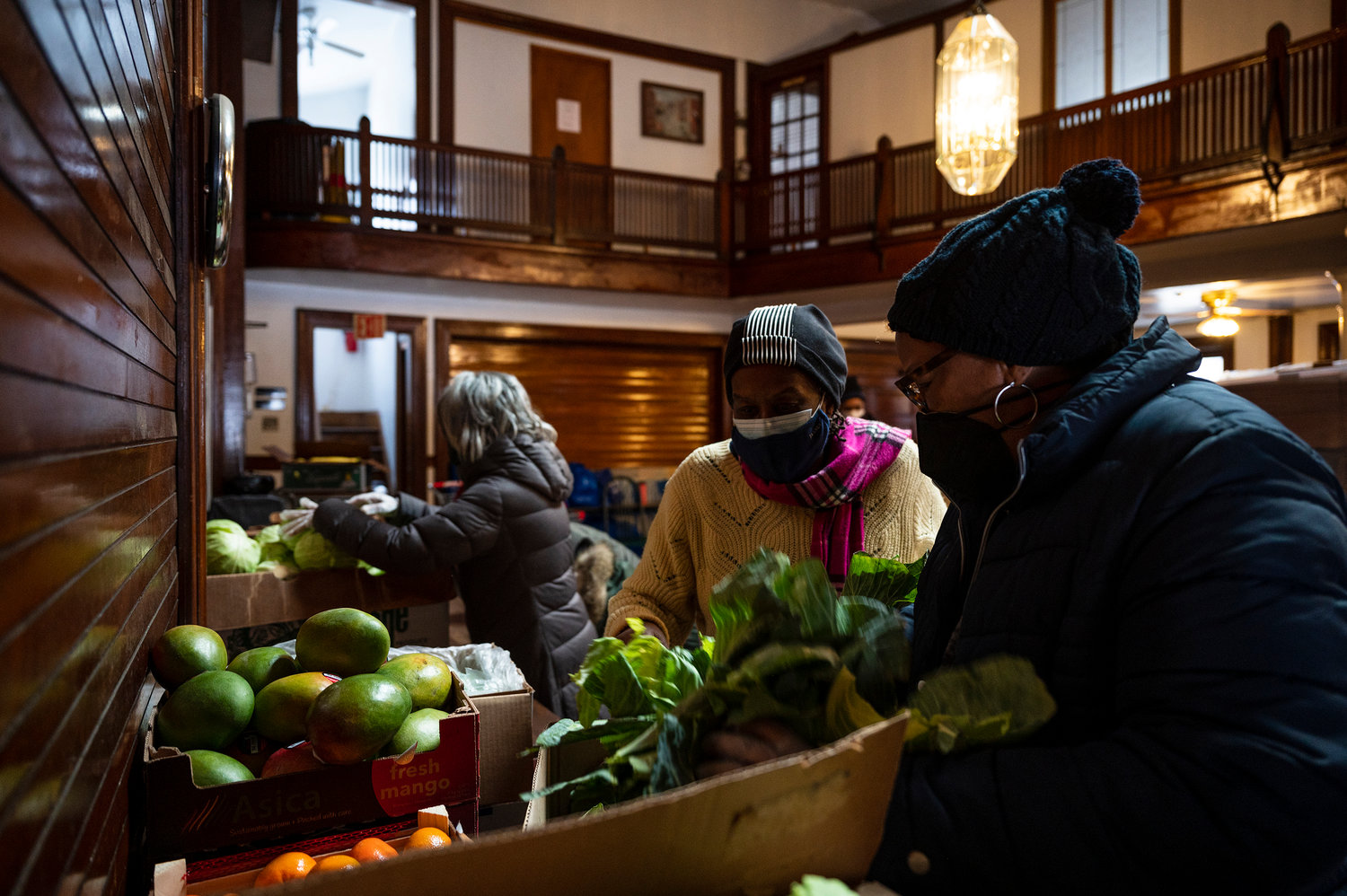 Volunteers sort through food and prepare bags ahead of a Monday afternoon distribution of the Marble Hill pantry at St. Stephen’s United Methodist Church. Whether this stockpile of food for the needy remains will depend on the religious institution’s next pastor, organizers say.
Hiram Alejandro Durán 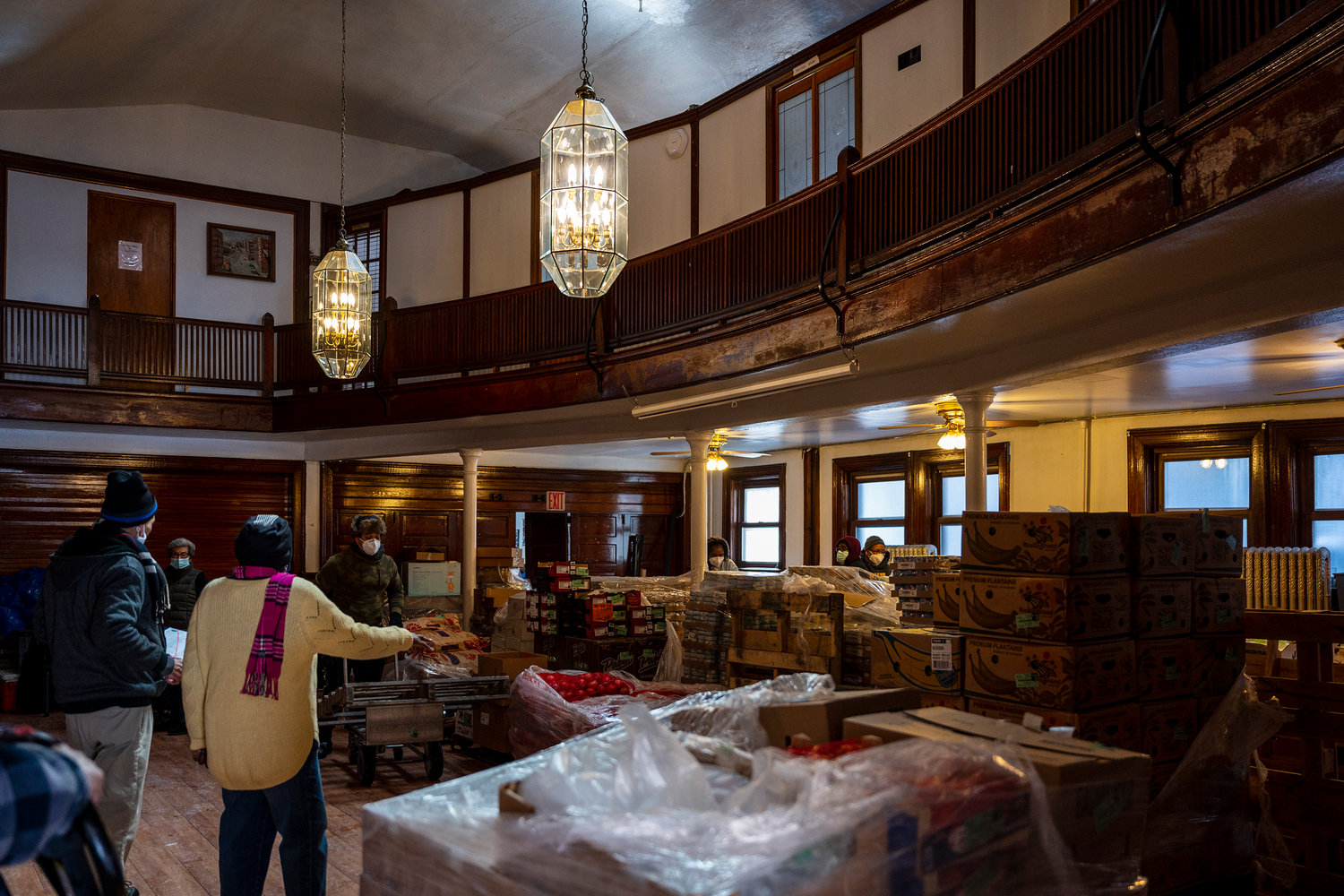 Volunteers sort through food and prepare bags ahead of a Monday afternoon distribution of the Marble Hill pantry at St. Stephen’s United Methodist Church. Whether this stockpile of food for the needy remains will depend on the religious institution’s next pastor, organizers say.
Hiram Alejandro DurÃ¡n 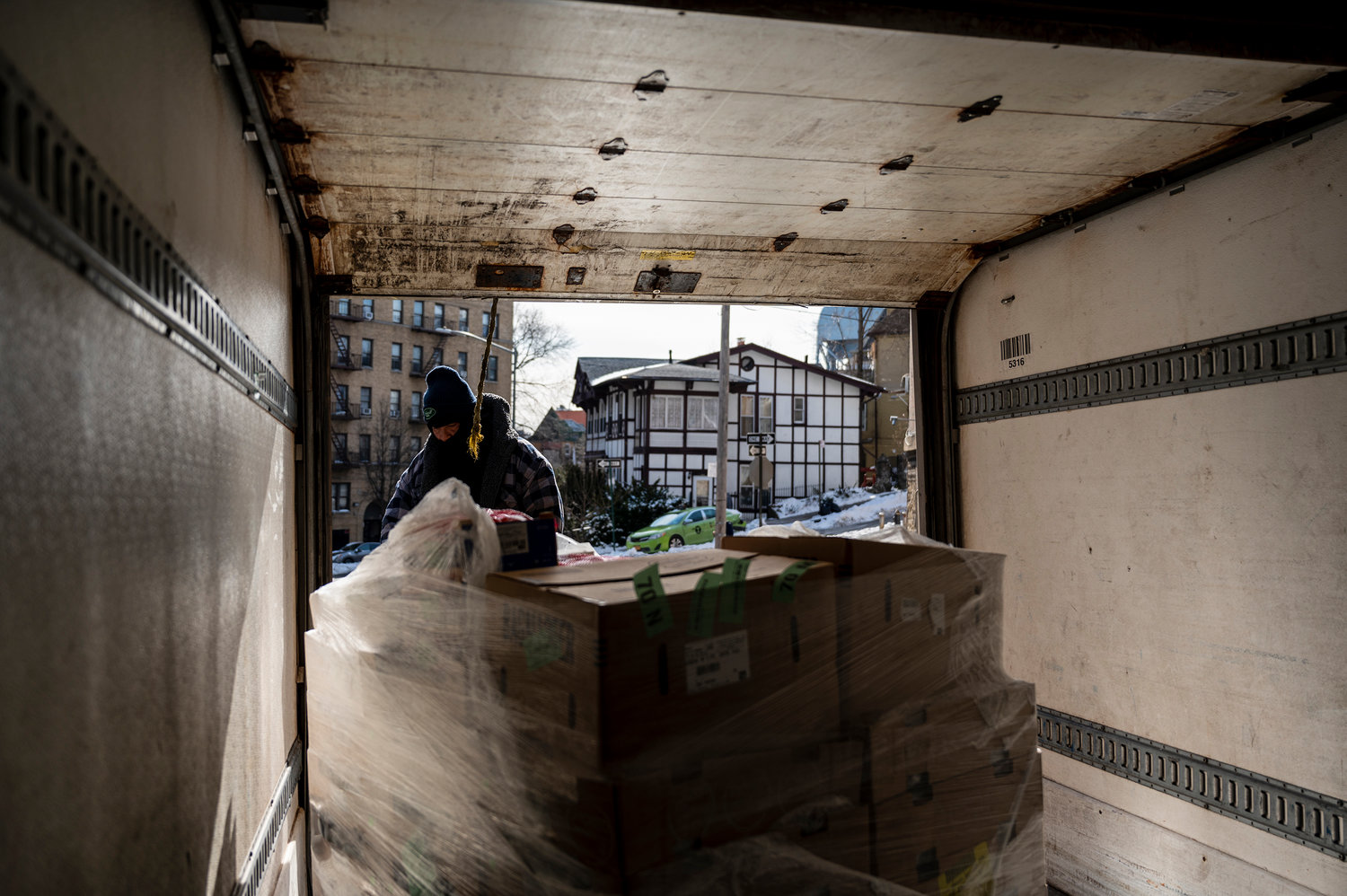 A volunteer unloads food crates from a nearby delivery truck parked near St. Stephen’s United Methodist Church, ready to stock up the Marble Hill food pantry there. Whether this stockpile of food for the needy remains will depend on the religious institution’s next pastor, organizers say.
Hiram Alejandro Durán
Previous Next
What's the difference?

Not to be confused, a food bank and food pantry are two different things.

According to Feeding America, food banks vary in size, safely storing a large amount of food. The banks deliver boxes of food to pantries. A food pantry is an individual site that directly gives food to a neighborhood such as Marble Hill.

The Marble Hill pantry at St. Stephen’s United Methodist Church is operated by Northwest Bronx Food Justice Coalition, which hosts a virtual town hall fundraising event on Monday, Feb. 14 at 7:30 p.m. It can be found at bit.ly/pantrytownhall.

For more information on how to participate or donate, call (646) 558-8656, or email nwfoodjusticecoalition@gmail.com.

As time moves on for Anthony Del Orbe, the harder it gets to manage a 13-hour shift at the Marble Hill food pantry.

Located at St. Stephen’s United Methodist Church, the pantry typically provides more than 250 families with fresh produce and dry food each Monday. But the new year began without a vital resource: funding. From people in the community, since some of the usual sources of cash — like from city coffers — may not be immediately available in the wake of the coronavirus pandemic.

That money is needed to pay out not only salaries but also for its space near West 228th Street. Without it, the pantry can’t distribute its fresh produce right away, risking a chance those fruits and vegetables could spoil.

St. Stephen’s has hosted the pantry throughout the coronavirus pandemic. Keeping it active has required Del Orbe to work even harder collecting donations, gaining sponsors, and simply sharing what the pantry does to the rest of the community.

That ultimately helped secure a large refrigerator — donated by Flowers by Zenda — that could store larger amounts of perishable food. The problem, however, was getting to the fridge — which was located on West 225th Street and Broadway, just blocks from St. Stephen’s — was slightly complicated. Workers had to make multiple trips from the fridge to the church, of food using hand trucks. The flower shop also supplied the pantry with equipment like electrical jacks and large hand trucks that can stock a large multitude of food.

“This is a church,” Del Orbe said. “Not a storage space.”

Yet, none of those roadblocks could be worse than people going home without food, Del Orbe said. If a sudden snowstorm hit New York City, for example, delivery trucks could not make the trip, and the Marble Hill pantry would need to be prepared to store enough food on-site to carry needy families through such an event.

“When the truck (food delivery) comes at six in the morning, we bring it inside the church where we packed, go over the inventory, see how many bags we can make with the amount,” Del Orbe said.

“We will stay in the pantry for the whole day.”

But the work isn’t over on Monday. Instead, many of the workers are back through Wednesday cleaning up the church space — rearranging tables, clearing out bags, and picking up garbage. It’s important, Del Orbe said, to leave the church space exactly how they found it.

Some funding for the coalition comes from the Bon Secours Mercy Health Foundation. However, according to coalition director Jacki Fisher, keeping pantries like this going requires help from the surrounding community. Not just in volunteers, but also in money.

A new online crowdfunding campaign — found at tinyurl.com/MarbleHillPantry — seeks to raise $50,000, but has pulled in just a fraction of that so far.

“The town hall is a kickoff to the fundraising,” Fisher said, “letting people know about it is key to the success,”

Although this is ultimately a yearlong effort, the latest gathering is still only the beginning of fundraising.

Fisher explained that ideally it is needed to gather their donations earlier to be on the safe side. However, their expenses are monthly, meaning it is not needed all at once.

Dorothy Shepherd spends her time at the pantry packing bags — many of which can weigh up to 50 pounds. At the height of the pandemic, this same food was handed out in boxes. Funding problems have forced them to switch to bags, a change that makes doing this kind of volunteer work — typically involving ages ranging from 19 to 83 — more difficult.

Shepherd organized the online fundraising campaign, more to ensure the pantry will still be around in 2023. The hope is it will remain at St. Stephen’s, but because the church is bringing in a new pastor next summer, it’s unclear if St. Stephen’s will still be its home by the time fall rolls around.

“The rent is so high on Broadway that it’s so difficult to pay the rent,” Shepherd said. “We’re getting a new pastor in June, and it’s the pastor’s decision whether or not they want to keep everything going or change their agenda.”

Del Orbe already has a project in mind for the following year.

“I’m planning to go to another church in Washington Heights on 179th Street,” he said. “We can store food and do the best that we can to continue.” 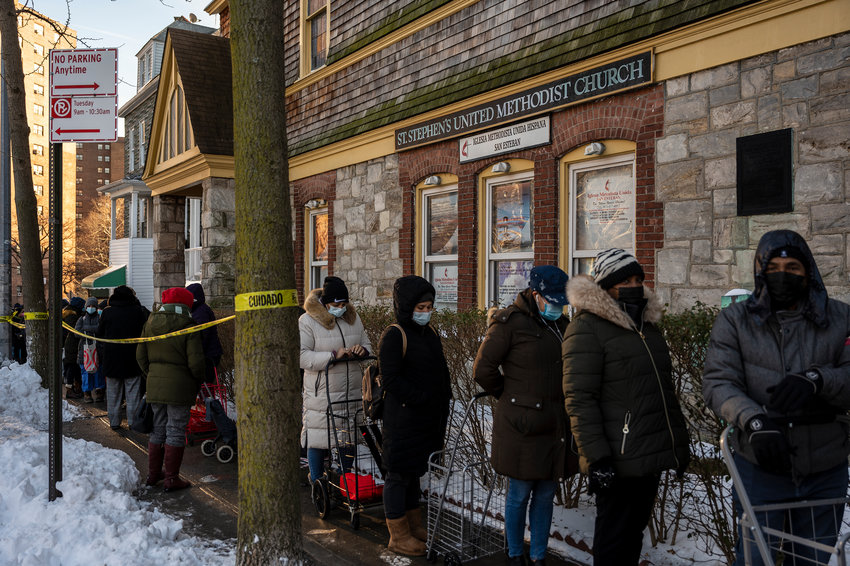 Many of the food essentials are collected for the Marble Hill pantry at St. Stephen’s United Methodist Church. Organizers hope to have this space …

One teenaged volunteer, who only gave his name as Joseph, was amazed how many people of all ages braved the cold for hours just for a bite to eat. More often than not, younger people like him would stand in line in place of their older parents or grandparents, saving them from having to weather such extreme conditions.

The workers try to keep the line moving as quickly as possible. On many Mondays, Shepherd is in charge of ensuring each food bag is properly filled. If not, she only has to yell “pineapples!” and another worker like Joseph rushes over with multiple heavy boxes, keeping everything close at hand for the bag-packers.

Joseph’s only been coming to St. Stephen’s for a few months. Yet, he already recognizes some of the people who visit the pantry for their weekly pickup. And many recognize each other too, he said, standing with each other in line, catching up on the latest from some of the surrounding neighborhoods they frequent.

“I always like helping the community,” Joseph said. “It’s also kind of easy. It takes about 30 seconds to put a bag together.

“We all just want to help.”