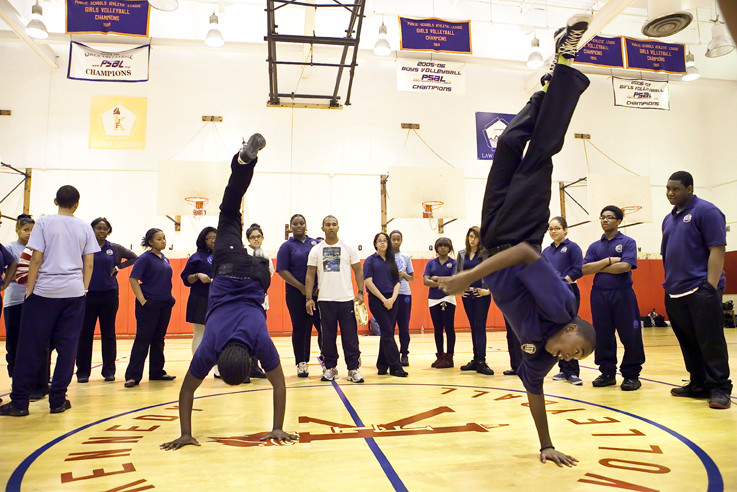 Friday morning started with the rhythm of ginga for about 30 New Visions Charter High School for Humanities students.

Legs shot back diagonally and swung forward as rows of students kicked through the alternative footwork of the Brazilian martial art called capoeira. Arms jut out of students’ navy Humanities shirts and thrust across their chests to the beat of a large tambourine called a pandeiro. Between leaping legs and jabbing arms, students showed off their mastery of capoeira’s principal move: the ginga.

This fall, Humanities unveiled an alternative to the traditional physical education curriculum by offering students the option of studying capoeira with Marcelo “Côco” Fagundes. Mr. Fagundes, a Brazilian native, began learning capoeira when he was 9. By 16, he was schooling others on the movements and rhythms that fuse self-defense techniques, dance, acrobatics and music.

During their first week, students focused on learning various kicks. They learned the ginga, a step used to keep capoeiristas on their toes, and a cartwheel-like move called aú.
Next week, Mr. Fagundes says the “real work” will begin as he supplements workouts with lessons on the instruments and Portuguese songs used to keep tempo for capoeira students.

Students will learn about capoeira’s history, which Mr. Fagundes described as an art form that grew “pregnant in Africa, but was born in Brazil.” Enslaved Africans pioneered the martial art as a freedom fighting tool in 16th century Brazil. In order to disguise capoeira from the Portuguese, the slaves incorporated dance moves and practiced the steps to music. According to oral tradition, groups of capoeiristas successfully rose up against their masters, escaped and began passing on the martial art to others. Centuries later, Mr. Fagundes and his wife Jennifer Sanchez-Fagundes, who founded ABADÁ-Capoeira Bronx, are part of a global community that uses capoeira to promote healthy lifestyles, inter-generational bonding and highlight an Afro-Brazilian tradition.

Inside the John F. Kennedy Campus gym, sophomores Tandy James and Leanne Bowers say that learning capoeira has inspired them to stay more active by practicing kicks off campus.

“It doesn’t compare at all to regular gym. We’d be doing flag football, basketball, baseball and all that. But this is way different. To actually learn new fighting techniques, it’s pretty cool,” Leanne said.

Her only complaint is that after capoeira, “you’re so sweaty, you wish there were showers here.”

Mr. Fagundes asks students to approach capoeira as a friendly challenge. On a recent day, he beckoned pairs of students into a class huddle where they “play” or take turns practicing stances —  one student initiates an offense step while another ducks away with a defensive move.

Hunter Lopez, a freshman, entered the circle with Mr. Fagundes, as the class clapped out syncopated beats. Mr. Fagundes kicked his leg toward Hunter, who ducked down, letting the limb swoop above him. A few steps later, Hunter’s leg swung above Mr. Fagundes. Their “play” ended with a handshake.

“It’s fun,” said Hunter. “I get to exercise, and get more flexible. I like learning new fighting stances.”

Omarina Cabrera, a graduate of the New School for Leadership and the Arts, MS 244, credits a traffic sign with motivating her to get into an elite Massachusetts prep school despite facing more challenges than many of her peers.

During her first year at MS 244, Omarina’s mother got evicted, which led to Omarina shuffling around between relatives’ apartments. Just after Omarina made plans to meet her father for the first time, he died of a stroke. Her attendance began to suffer.

“Typically, young adults look upon a political figure or someone in their life for guidance and support. I on the other hand, seem to find this inspiration within a black and white street sign. Imprinted on the signs are the words ‘one way.’ It taunts me with another reminder that coming in is not the obstacle, but making it out,” Omarina said, while reading her high school admissions essay to PBS’ Frontline crew.

Omarina’s success and MS 244’s role in it was showcased in a July 17 edition of Frontline titled “Middle School Moment.” The feature follows Omarina from sixth grade to her acceptance at Brooks School.

“At the beginning, I felt alone and I felt ashamed. I didn’t want to speak to anyone about it. I just isolated myself from everything and everyone,” she said.

During weekly reviews of students’ statistics, teachers and counselors noticed Omarina was often arriving late. Her homeroom teacher Catherine Miller and counselor asked her if something was wrong. After learning about the eviction, they helped her plot out routes from various relatives’ homes and supplied her with a MetroCard, books and extra support.

By the eighth grade, Omarina had practically impeccable attendance rates and a grade point average in the 90s. She and Ms. Miller worked together on her high school application process, and by graduation, Omarina had been accepted into nine schools.

She decided on the Brooks School in North Andover, Mass.

“ … I think the only reason I got through it was because of support people bring me –– Ms. Miller and my guidance counselor. The fact that they told me, ‘You’re bright and you’re special,’ and drove me and encourage me, told me never to quit and never let your dreams end at the corner of Sedgwick Avenue … “ Omarina said.

Two area schools –– The High School of American Studies at Lehman College (No. 42) and the Bronx High School of Science (No. 63) –– were  ranked among the top 100 high schools in the nation in the annual U.S. News & World Report rankings released Sept. 5. To see how other local schools fared, go to www.usnews.com/education/best-high-schools.