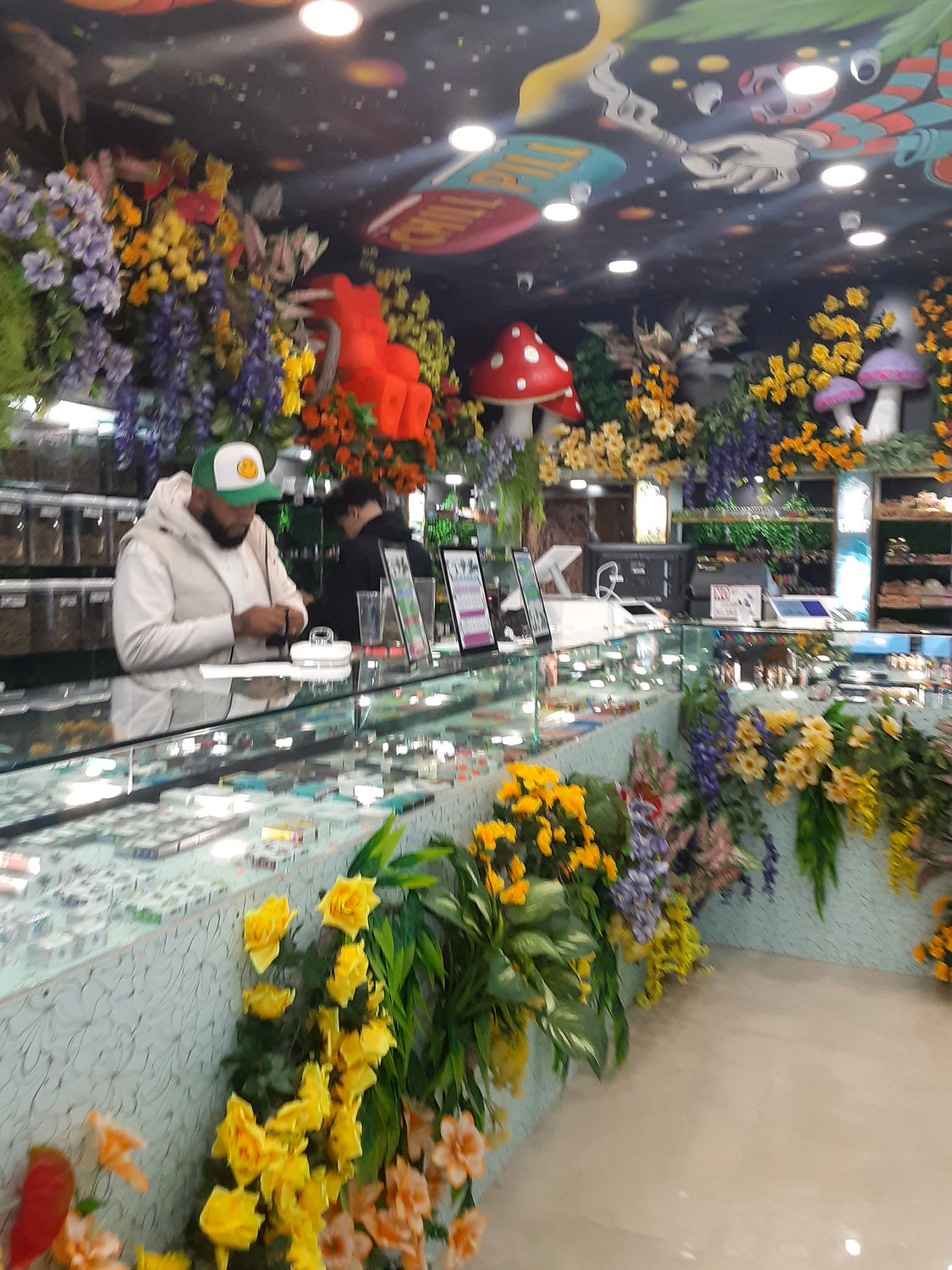 An employee works behind the counter at Pure Leaf on Broadway in Kingsbridge. The unlicensed shop is an explosion of color inside.
Steven McCoy 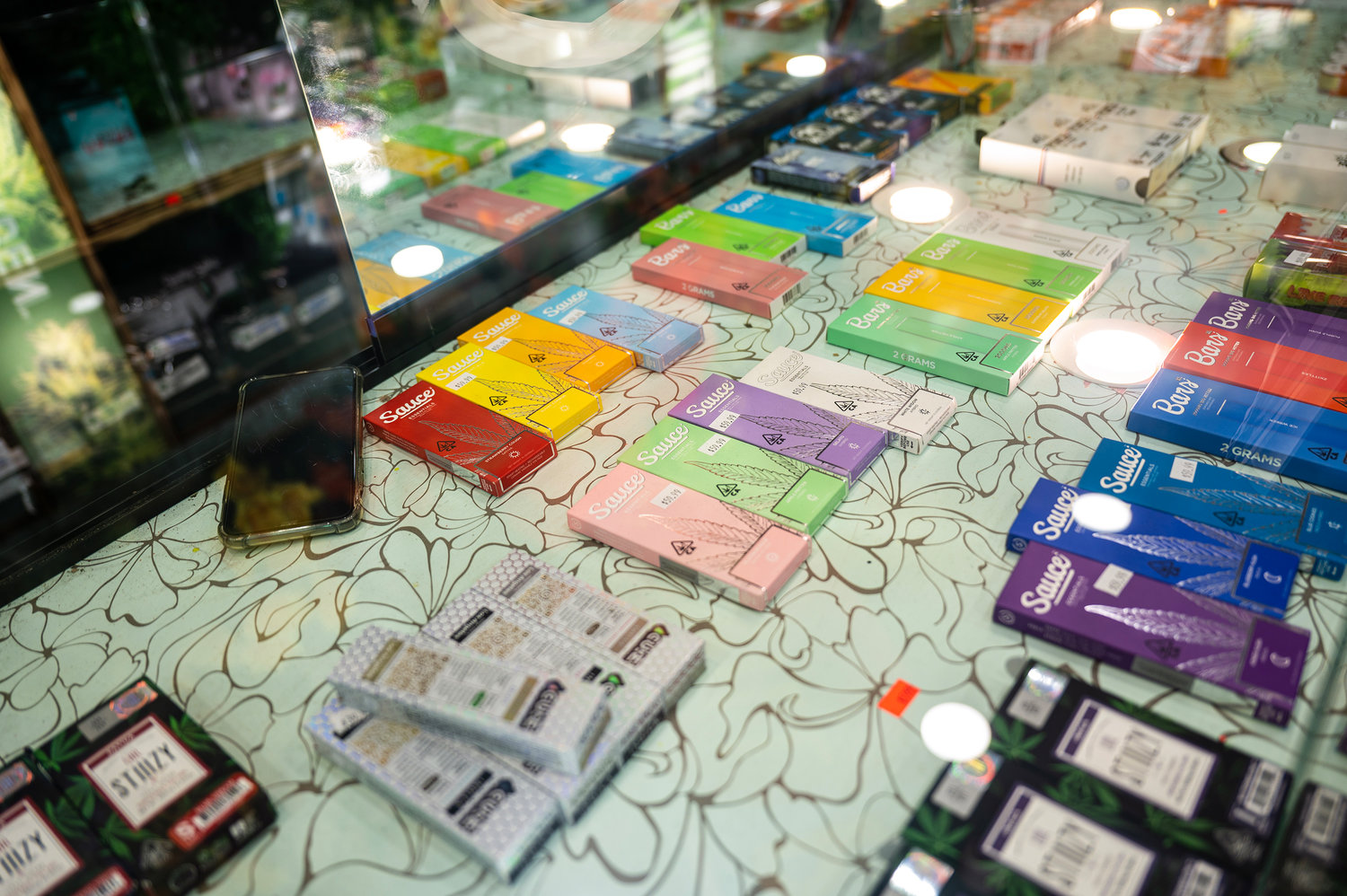 Cannabis products on display at Pure Leaf, a shop that opened in Kingsbridge last month. The black-and-white California symbol is a labeling requirement for cannabis products sold in dispensaries in that state.
Hiram Alejandro Durán 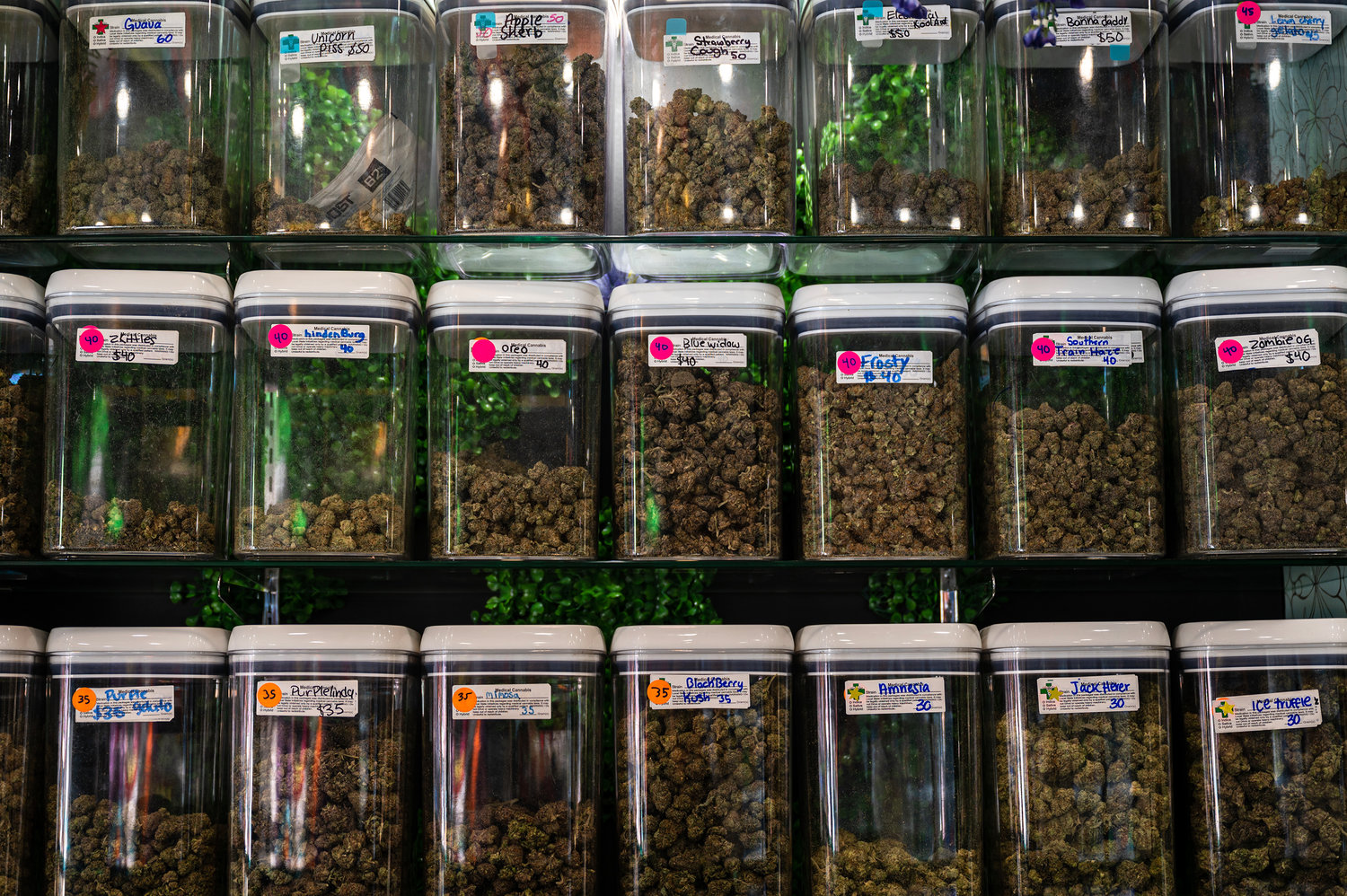 Cannabis products on display at Pure Leaf, a shop that opened in Kingsbridge last month. The black-and-white California symbol is a labeling requirement for cannabis products sold in dispensaries in that state.
Hiram Alejandro Durán
Previous Next

It’s really exciting that New Yorkers will finally be able to access reliable products where they know the farm and the entire supply chain from seed to sale.”
AARON GHITELMAN, spokesman, New York Office of Cannabis Management
BY ABIGAIL NEHRING

A state-licensed cannabis dispensary is coming to Kingsbridge near Broadway and West 231st Street, the state Office of Cannibis Management has informed Community Board 8. The retail space is in line to become one of 150 new dispensaries the state Dormitory Authority plans to complete across the state.

To date the authority has initiated negotiations with 350 landlords in anticipation of leasing sites, marking the launch of New York’s recreational cannibis market, spokesperson Jeffrey Gordon told The Riverdale Press.

The site in Kingsbridge is only a stone’s throw away from another colorful storefront business called Pure Leaf — one of many unregulated pot shops in the city that have sprung up on streets during the long wait for above-board business to commence.

“They’re everywhere now,” said Liz Perez, a local woman who chatted with The Press on her way down the block. “It’s something we’ll have to get used to. As long as they stick to the laws and regulations, it’s fine. We need all the tax dollars we can get. I’d rather this than having guys on a corner.”

Only Pure Leaf isn’t contributing any tax dollars because it’s not licensed.

But with so many vendors selling cannabis openly in a robust unregulated economy, most New Yorkers can’t tell the difference.

“I was very curious when they opened,” said Cliff Elkind, a former teacher who also paused on his way past. “They had balloons and everything, and I did think it was part of the state legal system. This day in age, why not? I would prefer this to a bar.”

As he spoke, customers flitted in and out of the store.

Dispensaries run by licensed operators will look and feel very different. State lawmakers legalized recreational cannabis in March 2021, laying out a vision for a regulated market that creates wealth in communities most impacted by cannabis prohibition. By statute, the state must set a goal for half the state’s cannabis licenses will go to social equity applicants who have either had a cannabis conviction, or have a close family member with one, or meet a set of other criteria that include veterans and distressed farmers.

“No other state in the country has succeeded in delivering on social equity,” said Desmon Lewis, who grew up in Morris Heights and in 2017 founded the Bronx Community Foundation with his brother, Derrick.

Anticipating the challenges ahead, they’ve partnered with the Bronx Defenders to create an educational hub for entrepreneurs interested in applying for social equity licenses.

New York was late in the game, Lewis said, and its cannabis law is unique. To support the law’s social equity goals, the authority is overseeing the launch of a social equity fund that will distribute up to $200 million into leasing and building out dispensary spaces.

Meanwhile, the state Office of Cannabis Management has since drawn up rules for everything from signage to what can be kept behind the counter.

“No other state has done that,” he said.

Still, of the 600 prospective applicants the Bronx Cannabis Hub reviewed, only 150 qualified, and 35 ultimately made it through the gauntlet to submit an application to the state. The Bronx hub paid for their $2,000 application fee as part of its support.

Cannibis business
ready to roll out

Nearly two years after the cannabis bill was signed into law, New York’s cannabis control board has approved 36 applicants for retail licenses. So far, one has made it to the finish line.

Housing Works Cannabis Co., operated by the chain of mission-driven thrift stores founded in 1990 by ACT UP organizers, opened its doors to a scrum of photographers two weeks ago in lower Manhattan’s Astor Place.

It offers a taste of what’s to come.

“When a dispensary opens in Riverdale at some point this year, consumers will be able to expect what you saw on the shelves at the Housing Works launch, the first adult-use retail dispensary,” said Aaron Ghitelman, a spokesperson for the New York Office of Cannabis Management.

He said the West 231st Street shop will likely sell a similar range of products, including cannabis flower, edibles with dosages verified by testing and clearly printed on the label, and vape products.

“It’s really exciting that New Yorkers will finally be able to access reliable products where they know the farm and the entire supply chain from seed to sale,” Ghitelman said. “That’s a radical departure from how cannabis has been the last few decades.”

A spokesperson for the state Dormitory Authority said they reviewed more than 10,000 potential dispensary locations across the state and whittled the pool down to 2,300 potentially suitable sites. Of those, DASNY has initiated lease negotiations with landlords at 350 sites.

New York City community boards will play an advisory role in approving dispensary licensees, much as they do with state liquor authority license applicants.

The applicant selected to run the first licensed dispensary in CB8 will present to the board 30 days in advance. Sometime in January or February, chair Laura Spalter said she would invite the state office of cannabis management to make a presentation to the board about the process and the new dispensary site selected in Kingsbridge.

Lewis said he knows of “a few other” community boards in the Bronx that have been notified of a dispensary site selection in their districts.

“Watch out for what’s going to happen very soon,” he said.

‘Educate, confiscate,
and not incarcerate’

Spalter said the state office has notified the board of the new dispensary site selected in Kingsbridge. She didn’t share the address, but confirmed it was near Broadway and West 231st Street.

Spalter said the recreational cannabis rollout “has been confusing and troubling in its lack of foresight.”

The board has received numerous complaints about unlicensed vendors selling cannabis products, she said, and CB8 has forwarded them to the state office of cannabis management.

“The enforcement piece is vital, but absent,” Spalter said. “The powers that be picked this address off Broadway, which is just a hop, skip from the illegal smoke shop.”

An employee at Pure Leaf declined to answer any questions from The Press last Wednesday, and the owner was unavailable after two attempts to inquire about the business.

Assemblyman Jeffrey Dinowitz also said he was aware of the new unlicensed shop and had also reported it to the state office.

“We’re in a climate where there are so many illegal things going on,” Dinowitz said. “Whether it’s speeding and drag racing, there’s very little enforcement. The agency has to crack down on those operating illegally.

“It would be in essence stealing tax dollars, and also with licensed dispensaries there will be greater quality control.”

A task force led by the city sheriff’s office went on a two-week enforcement spree in December, conducting raids at 53 unlicensed dispensaries across the city. They seized more than $4 million worth of products. and issued 566 civil and criminal summonses to store operators.

Mayor Eric Adams said the goal was to “crack down on bad actors” without incarcerating them.

The mayor’s appointee to lead the city’s cannabis office, Dasheeda Dawson, said the enforcement action “not only tackles a growing public health and safety concern, but also ensures that those jeopardizing the success of New York’s equity-centered legalization will face fines, penalties, and other civil consequences.”

Unlike their unregulated counterparts, the products sold at licensed dispensaries will carry a 13 percent tax.

The state office of cannabis management said it had been informed of the unlicensed store that opened on Broadway last month ahead of the site selected by the Dormitory Authority, but didn’t specify if they’ve attempted to contact the owners or provide information on how to apply for a dispensary license.

Bronx Community Foundation’s Lewis said the difficulty of applying for a license likely diverted some entrepreneurs into the unregulated market.

“There has to be a strategy for trying to bring legacy operators into the regulated market,” Lewis said.