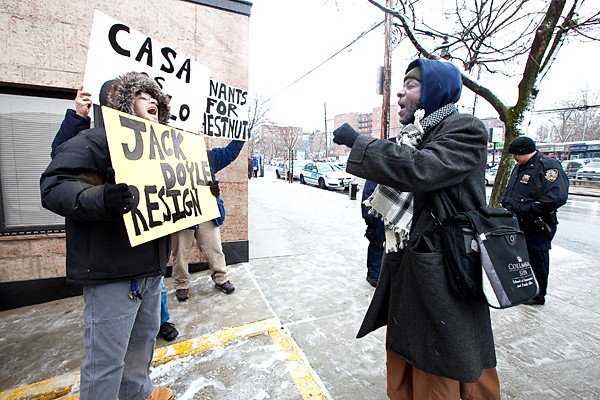 Ebrahim Ndure, a tenant from a building owned and operated by Chestnut Holdings, rails against the landlord and the counter demonstrators defending the company on Feb 8.
Marisol Dí­az/The Riverdale Press
By Adam Wisnieski

A group of tenants and members of tenants’ rights organizations rallied in front of a landlord’s headquarters last week, and the landlord rallied back.

Tenants who showed up to protest at Chestnut Holding’s 5676 Riverdale Ave. headquarters on Feb. 8 said they regularly deal with having no heat and hot water and that the landlord is unresponsive to their complaints.

Chestnut employees called the police to bar entry to tenants who had been chanting in front of the company’s building and were demanding a meeting with Chestnut CEO Jonathan Wiener.

After the protestors were forced onto the sidewalk, Chestnut employees emerged from the building with signs of their own.

Daniel Wiener, Chestnut Holdings’ Director of Investments and Commercial Operations and son of owner Jonathan Wiener, thinks Chestnut is being unfairly targeted by tenant-rights groups. The landlord argues Community Action for Safe Apartments (CASA) and New York Communities for Change (NYCC) — which were both represented at the protest — are organizing a minority of Chestnut’s tenants against it. Chestnut owns and manages more than 70 buildings in the Bronx, according to Mr. Wiener.

In response to the group of about 20 tenants who chanted, “What do we want? Heat. When do we want it? Now!” as sleet and snow fell, counter-protestors held signs that read “CASA hurts tenants,” “Chestnut helps tenants” and “CASA makes tenants suffer.”

After a brief shouting match, the tenants boarded a bus and left.

“It’s so cold you have to dress like this in your house,” said Ms. Jarvis 45, who was wearing a winter coat and scarf.

Her building, along with two other buildings represented by tenants at the rally, has been the target of many recent complaints for lack of heat and hot water filed with the Department of Housing Preservation & Development.