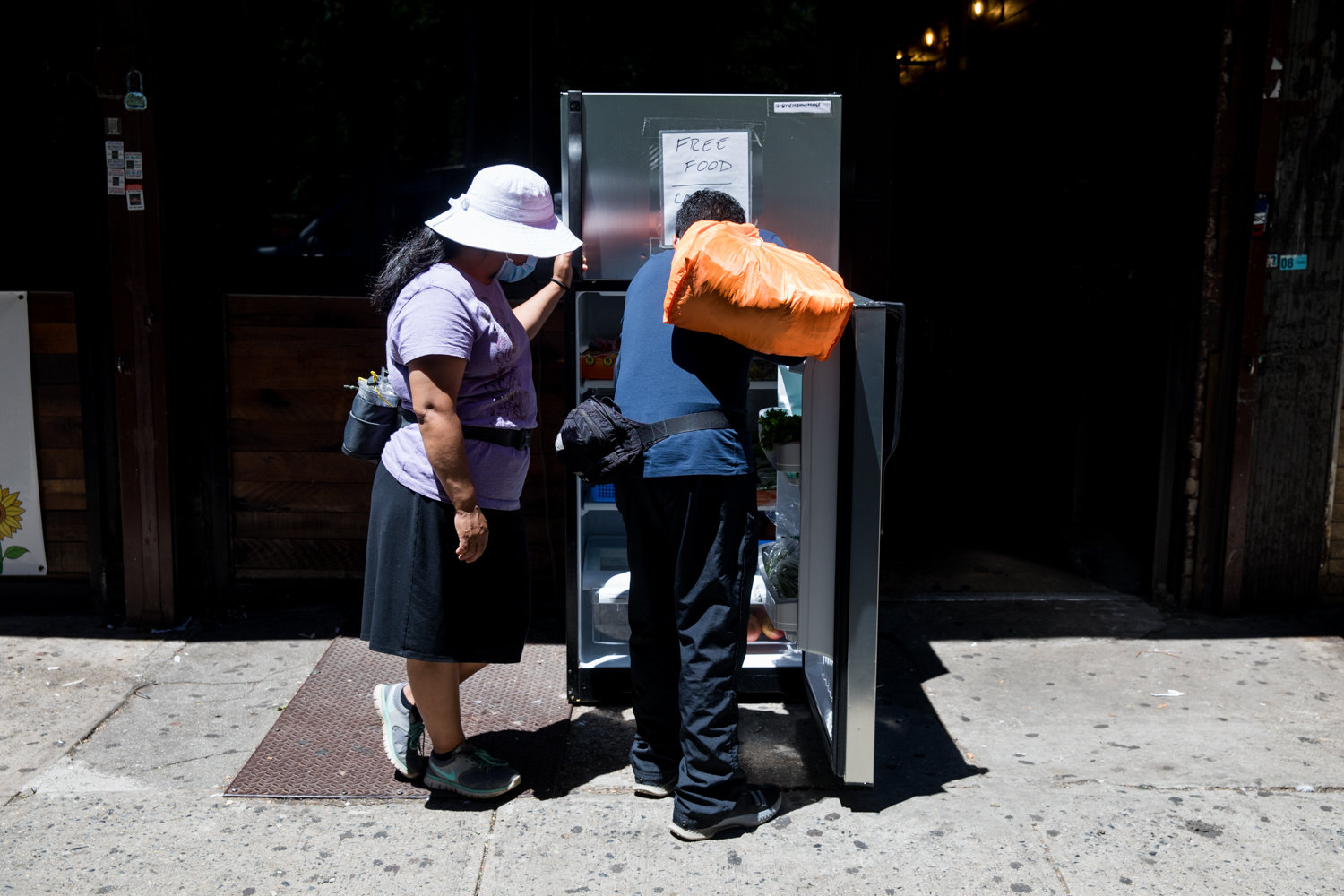 Passersby check a refrigerator outside The Last Stop on Broadway to see what food is available. The fridge there is part of a network across the city stocked by volunteers. Food is available for free to anyone who needs it.
JULIUS CONSTANTINE MOTAL 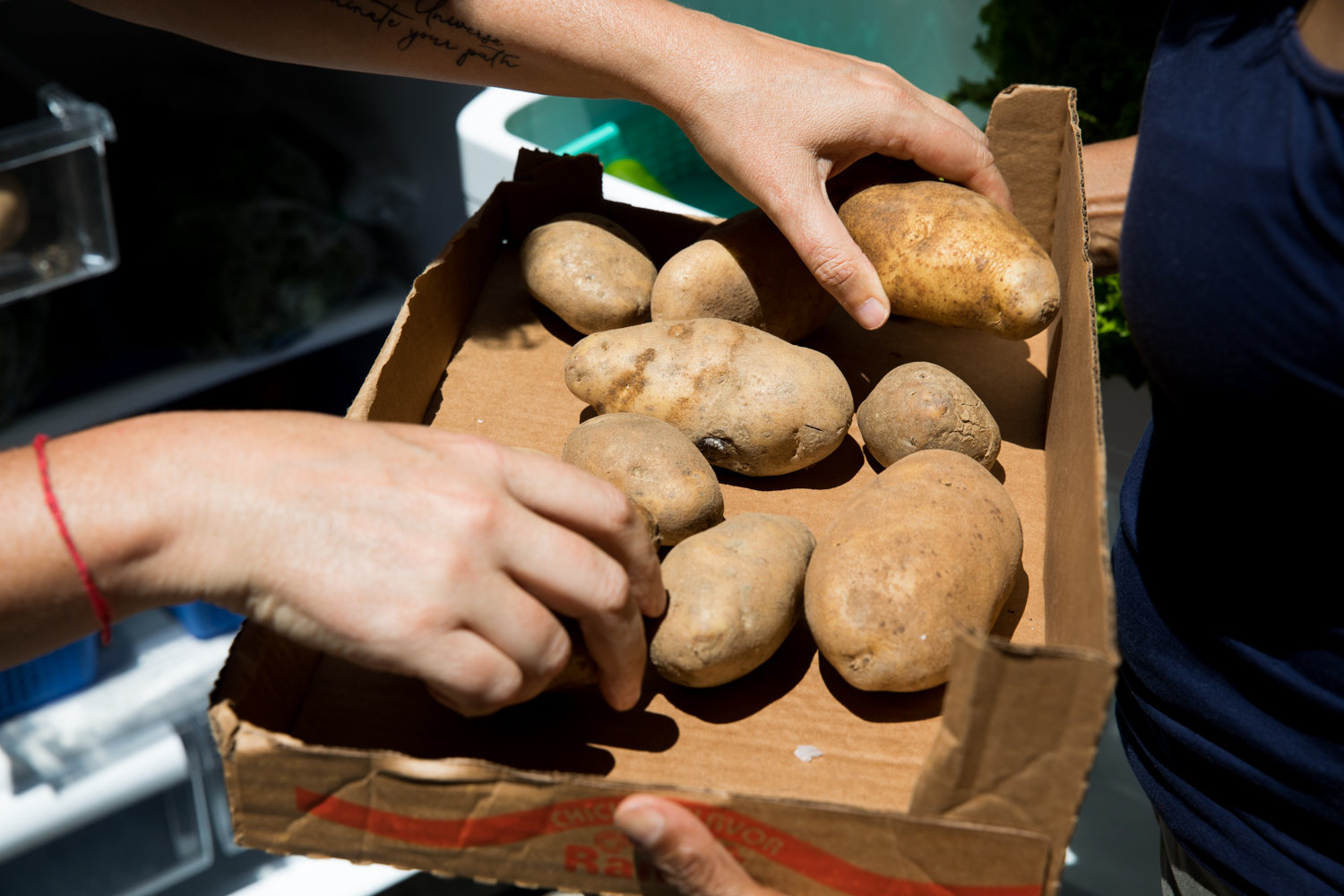 Sara Allen, left, and Selma Raven rearrange potatoes inside of a refrigerator they help maintain outside The Last Stop at 5977 Broadway. The fridge contains food that is available to anyone who needs it for free.
JULIUS CONSTANTINE MOTAL 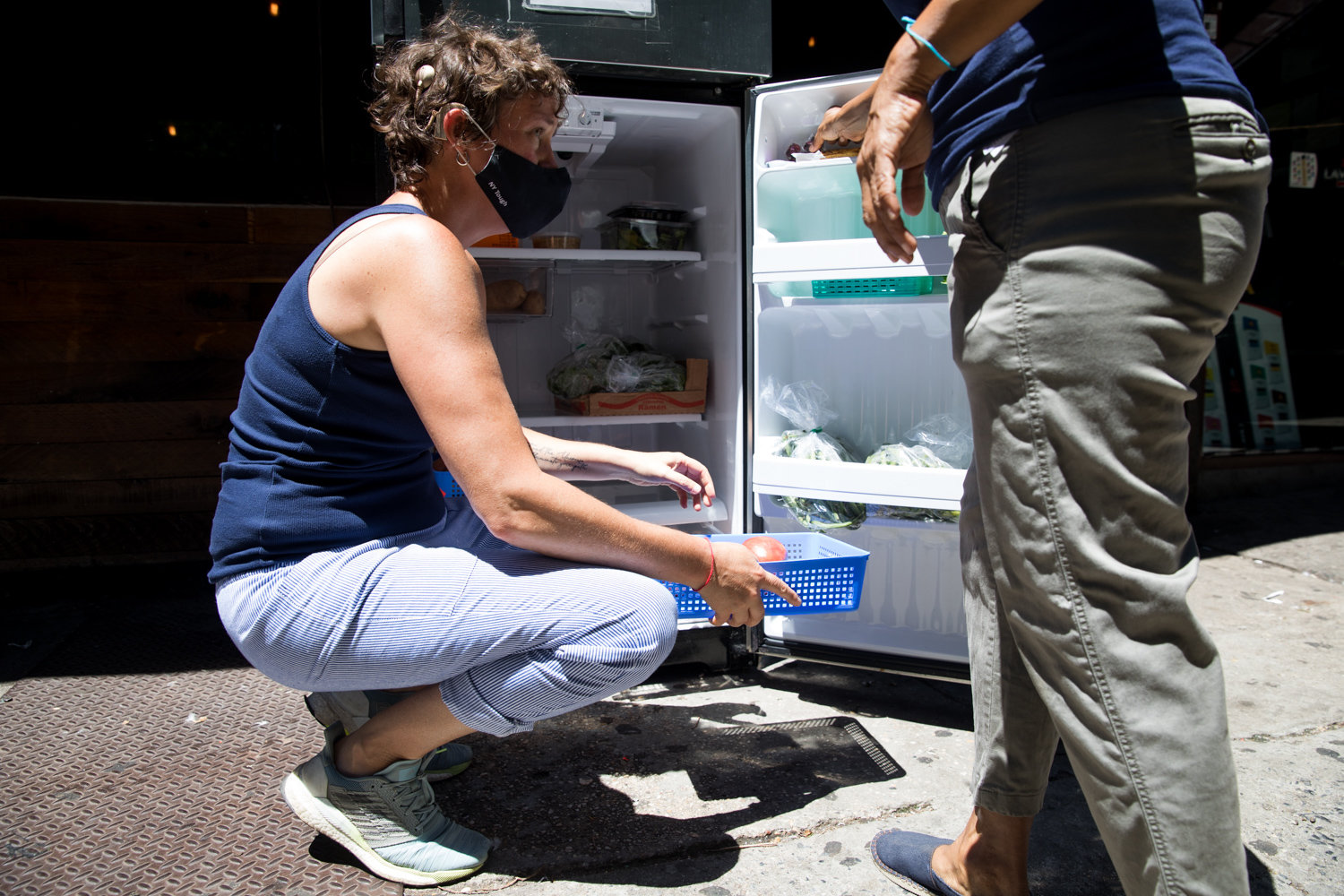 Sara Allen, left, and Selma Raven check the produce inside the ‘friendly fridge’ they help maintain outside The Last Stop on Broadway.
JULIUS CONSTANTINE MOTAL 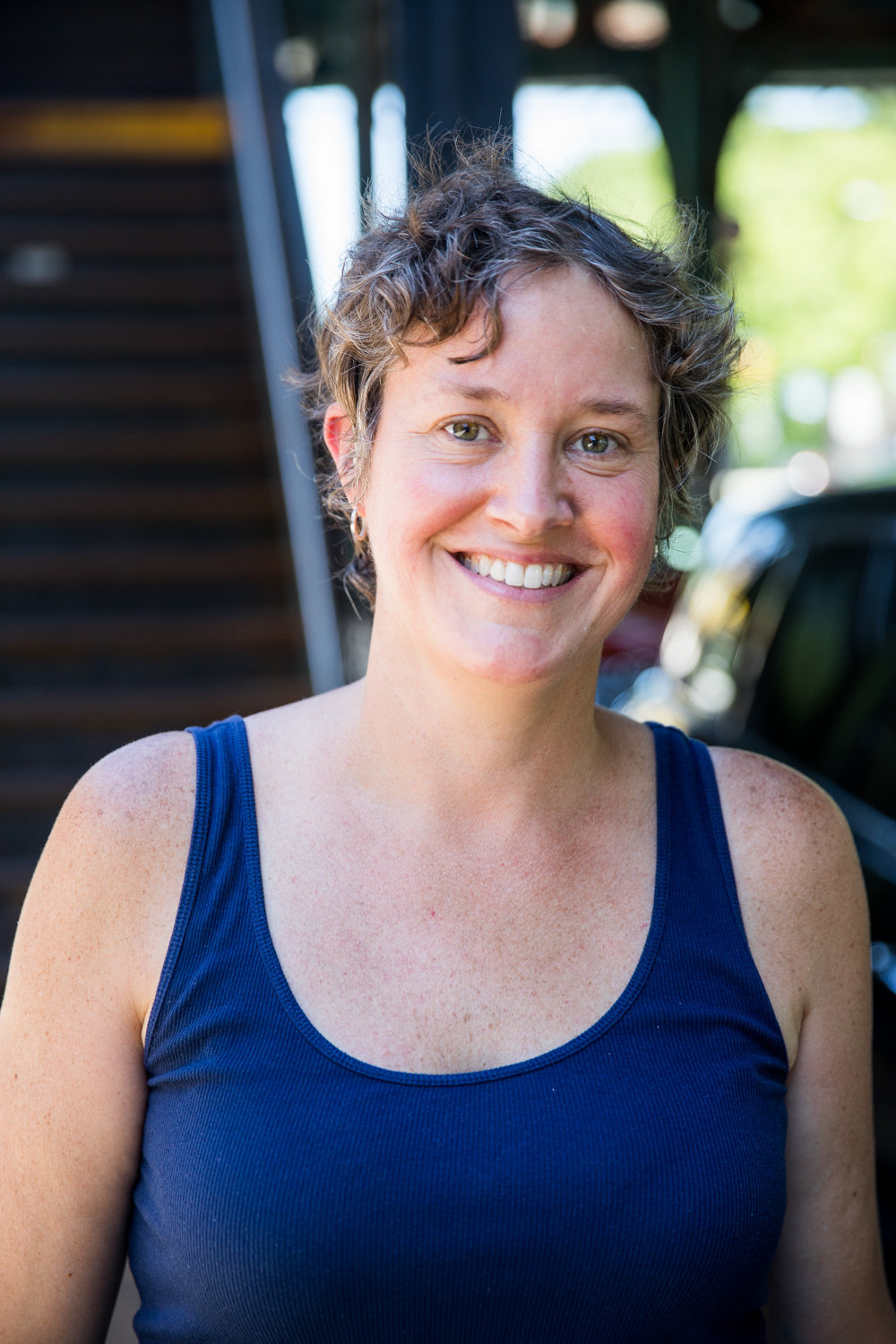 Sara Allen teamed up with friend Selma Raven to bring a ‘friendly fridge’ to The Last Stop at 5977 Broadway. The fridge is stocked daily with fresh food that is available to anyone who needs it, for free.
JULIUS CONSTANTINE MOTAL 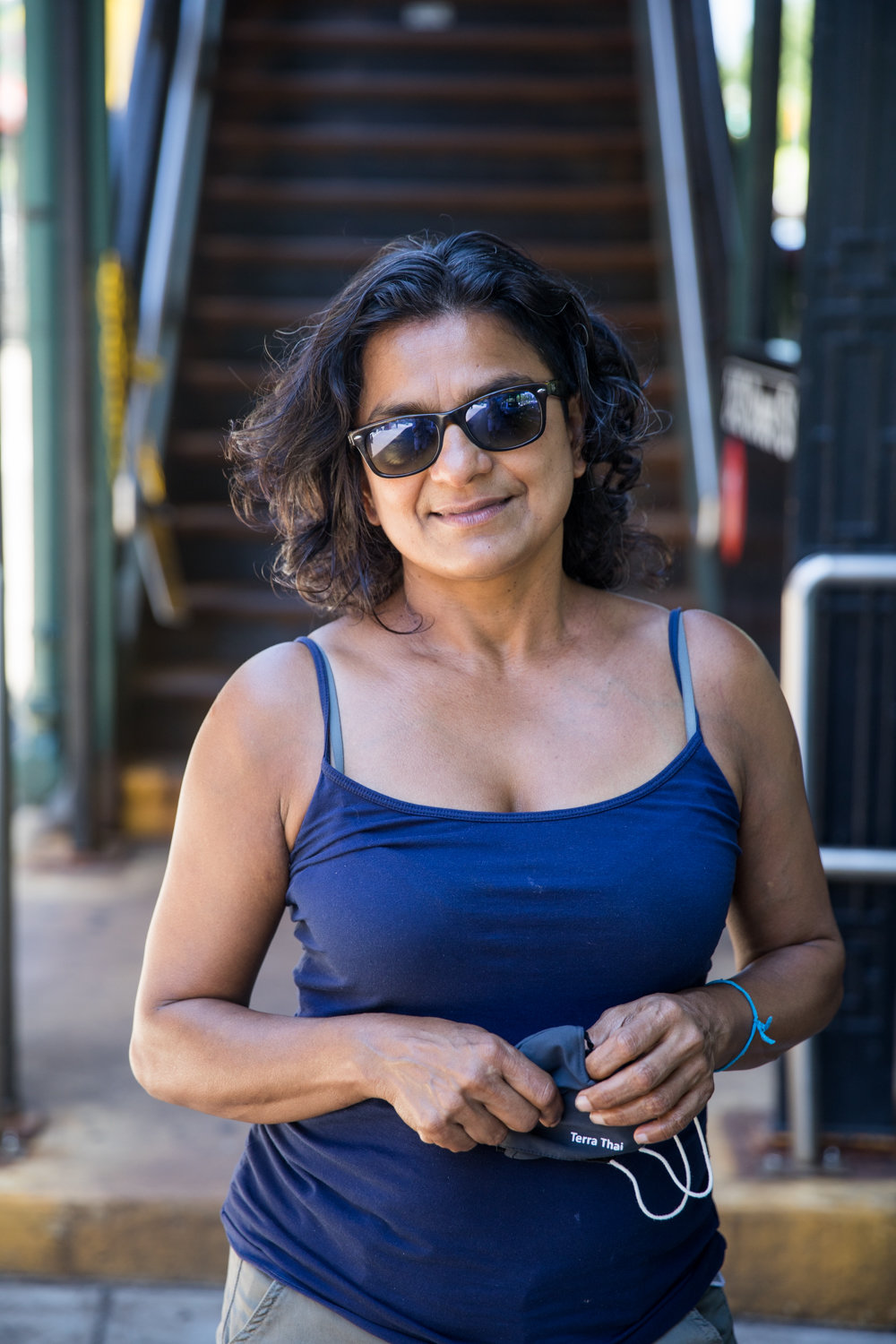 Selma Raven teamed up with her friend Sara Allen to bring a ‘friendly fridge’ to The Last Stop on Broadway. The fridge is stocked daily with fresh food that is available free of charge to anyone who needs it.
JULIUS CONSTANTINE MOTAL 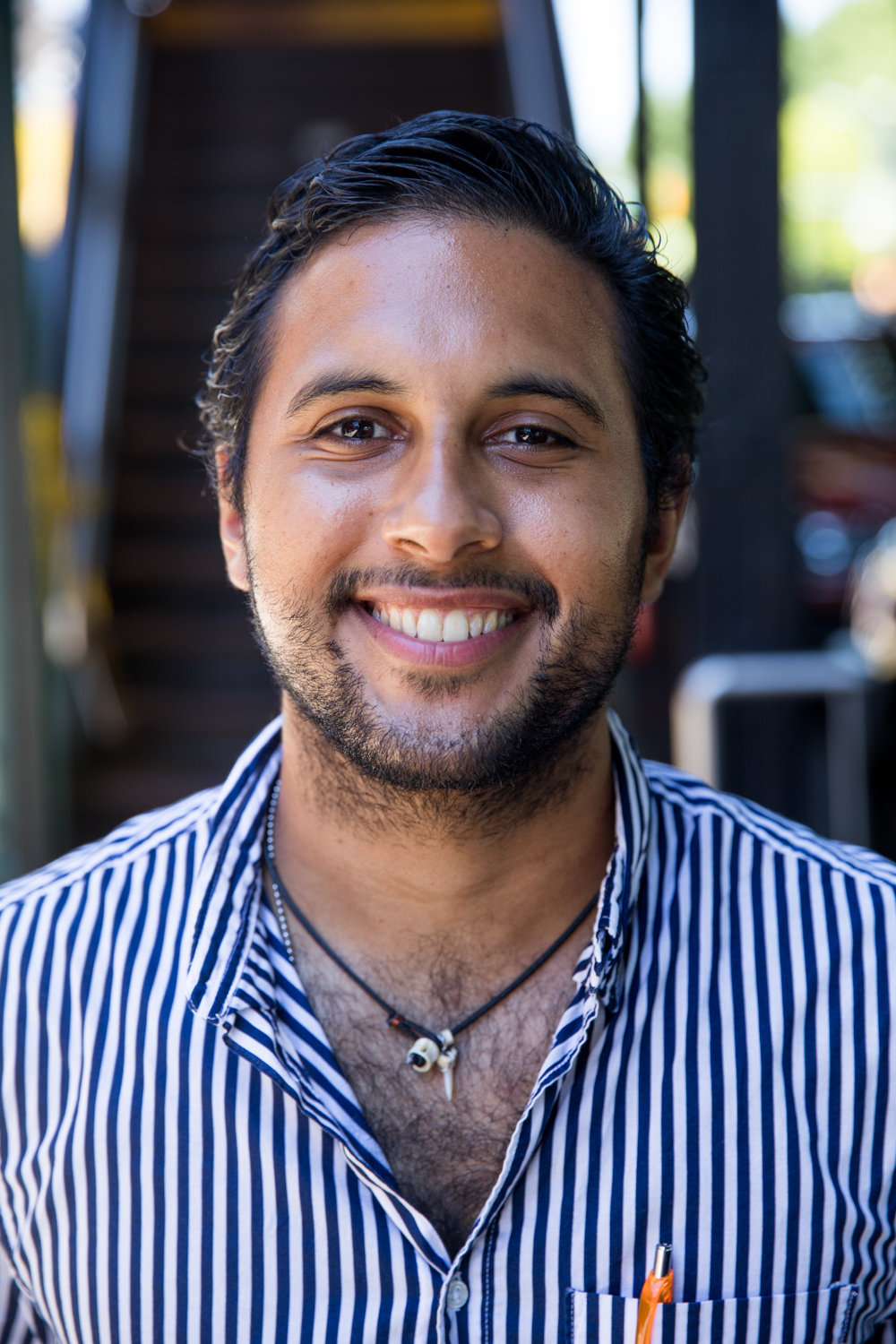 Daniel Nuñez, The Last Stop’s manager, feels the ‘friendly fridge’ outside the Broadway eatery is a great way to bring a community together.
JULIUS CONSTANTINE MOTAL 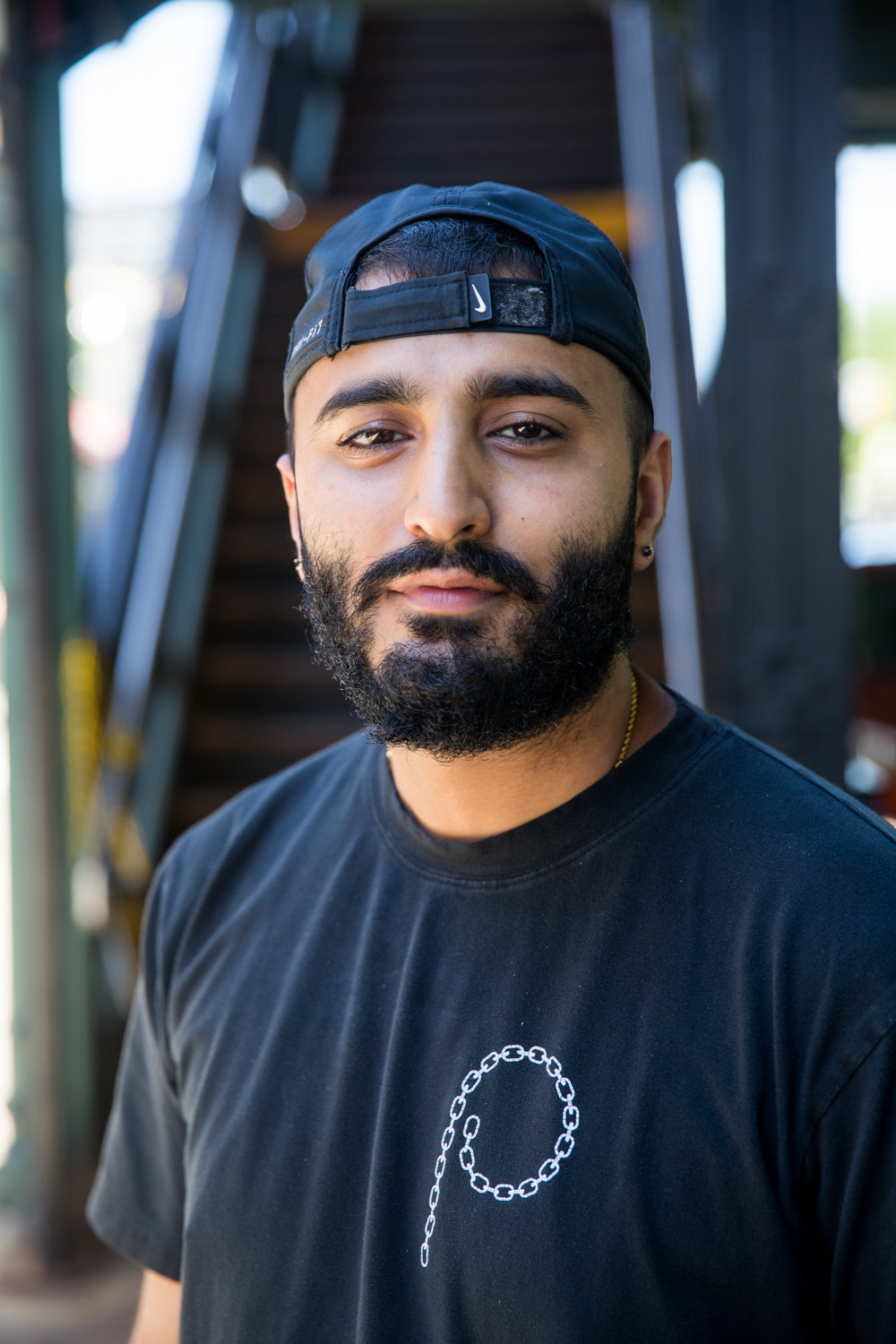 Pardeep Singh Deol , owner of The Last Stop, was on board with the ‘friendly fridge’ idea from the beginning. In the weeks since it’s been stationed outside his 5977 Broadway eatery, the fridge has been full of food available to those who need it for free.
JULIUS CONSTANTINE MOTAL
Previous Next
By MAYA KATZ

More than 37 million people struggled with hunger in 2018, according to the U.S. Department of Agriculture. But with the coronavirus pandemic, that number could top 54 million, according to Feeding America.

That’s one in every six Americans who may not have enough food to eat.

Still, society generates plenty of food waste — the kind that doesn’t have to be wasted, and could help someone in need.

That’s where the Friendly Fridge initiative has emerged. These are quite literally refrigerators set up outside of businesses or other heavily trafficked locations, stocked with food free for anyone who needs it. The food inside is donated by anyone with supplies to spare, all in an effort to create a judgment-free way to help curb at least some of the hunger in a neighborhood.

Friendly Fridge initiative was started by a self-described Brooklyn anarchist group known as In Our Hearts, a group known to not only known for its anti-war protests, but also its fight to bring food for those who need it.  So far, these outdoor fridges have been set up in Harlem, Bushwick, Bedford-Stuyvesant, Crown Heights, Brownsville, Prospect Lefferts Gardens, and now Kingsbridge.

It’s found a home in front of The Last Stop, an eatery at 5977 Broadway, that came about after Selma Raven and Sara Allen asked owner Pardeep Singh Deol and sister Raji Kaur to ask if they could set one up. Raven and Allen — locals with an interest in helping to feed those who are less fortunate — already got a no from a few other businesses they approached before walking into Deol’s eatery.

With a yes in hand, Allen located a used refrigerator on Craigslist, and since late May, has been in continuous operation 24 hours a day, seven days a week. It’s powered by an extension cord that stretches inside The Last Stop, and behind the bar.

Allen and Raven, who live in North Riverdale, restock the fridge daily, using food they purchase themselves.

“We go every morning to fill” the fridge, Raven said. “We have been picking up produce and also cleaning up.”

But Allen and Raven aren’t the only ones stocking the fridge. It accepts food donations from anyone willing to give, anytime throughout the day. It’s kind of like “take a penny, leave a penny,” except with the kind of food someone might find in a refrigerator.

Anyone with leftover food can leave it in the fridge for someone else who might be hungry. Others can simply go out and buy produce to donate to the fridge.

Sometimes, when The Last Stop opens in the mornings, general manager Daniel Nuñez finds the fridge already restocked. Some customers have even given Deol money to buy groceries for the fridge, while Last Stop regulars have brought their own food.

“It has really been a community effort,” Kaur said. “It is a lot of everyone pitching in and doing what they can to help out.”

When needed, Kaur brings food from home, and even has the restaurant help out. In fact, Last Stop has pledged to match what people donate.

Like many eateries during the pandemic, Last Stop has operated on modified hours with takeout and delivery only. Yet, the fridge has attracted more foot traffic to their part of Broadway which is, as its name implies, the last stop of the 1 train at West 242nd Street. Still, the fridge is not about helping business, Deol said, but instead give back to those in need.

“The fridge reinforces the family environment that we have at The Last Stop,” Nuñez said. “Some people who walk to The Last Stop for the first time see the interactions that we have with people, and our regulars who have been donating food.”

The fridge has found some notoriety through social media, drawing even more people to the end of the subway line to donate food.

Although fridges like this one were started in response to the coronavirus pandemic, The Last Stop hopes to keep their fridge going even when “these difficult times” are long passed. But the only way to continue the fridge is to continue donations, Kaur said. While that might be something doable through the rest of the summer, the fear is that it might become more of a challenge when the snow starts to fall — a time when such a fridge could be needed the most.

“I think it might be even more helpful in the winter months for people who are walking by late at night and don’t have anything to eat,” Kaur said. “They can just open the fridge and take whatever they need.”