Help could come in the form of a traffic light, or at the very least, better police enforcement 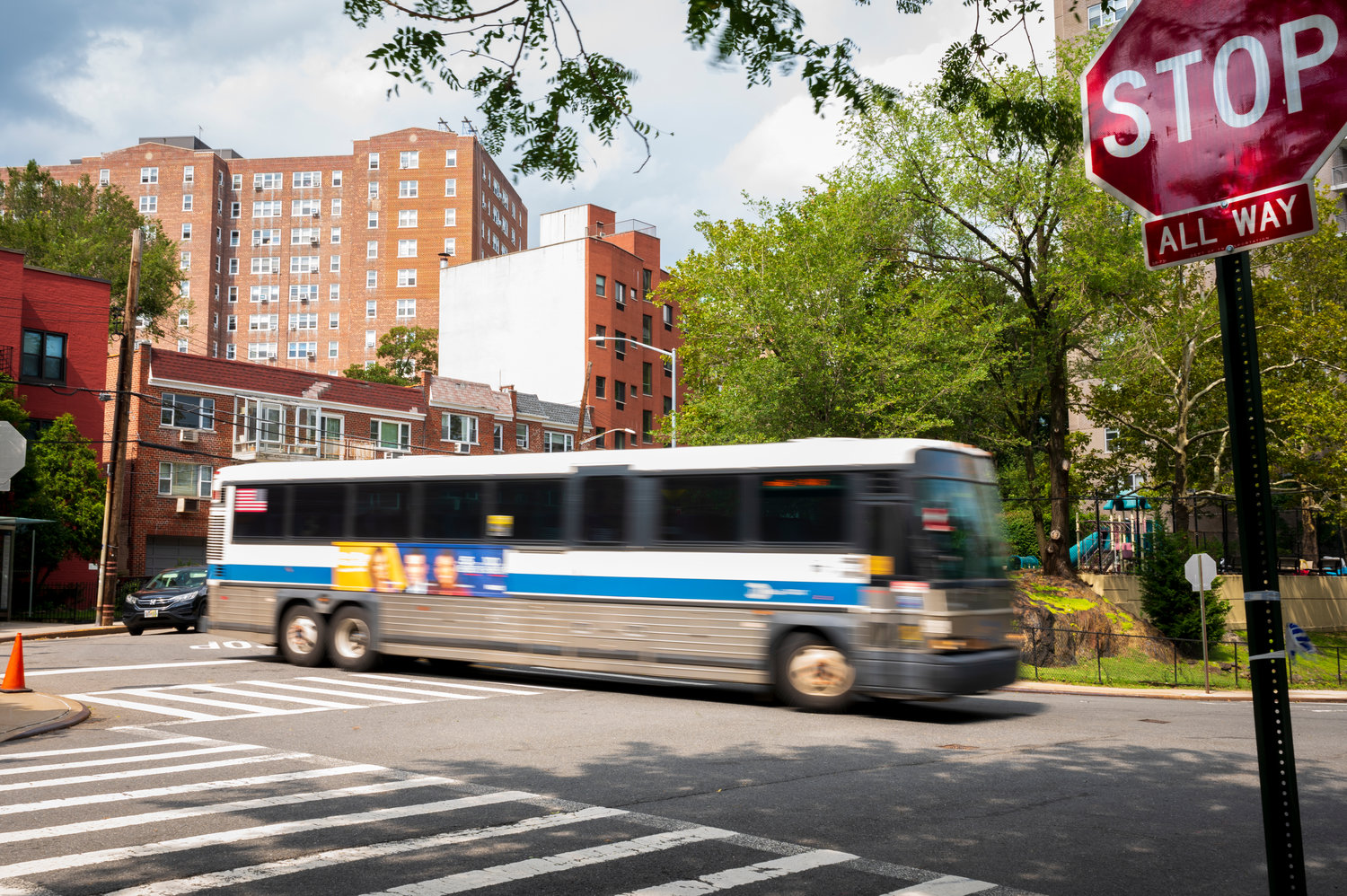 An express bus shoots around the corner at the intersection of Spuyten Duyvil’s Kappock Street and Johnson Avenue, where local political activist Ruth Mullen was killed Sept. 7. Lawmakers want the city’s transportation department to move quickly to ensure pedestrians like Mullen are safe when using the crosswalk there.
HIRAM ALEJANDRO DURÃN 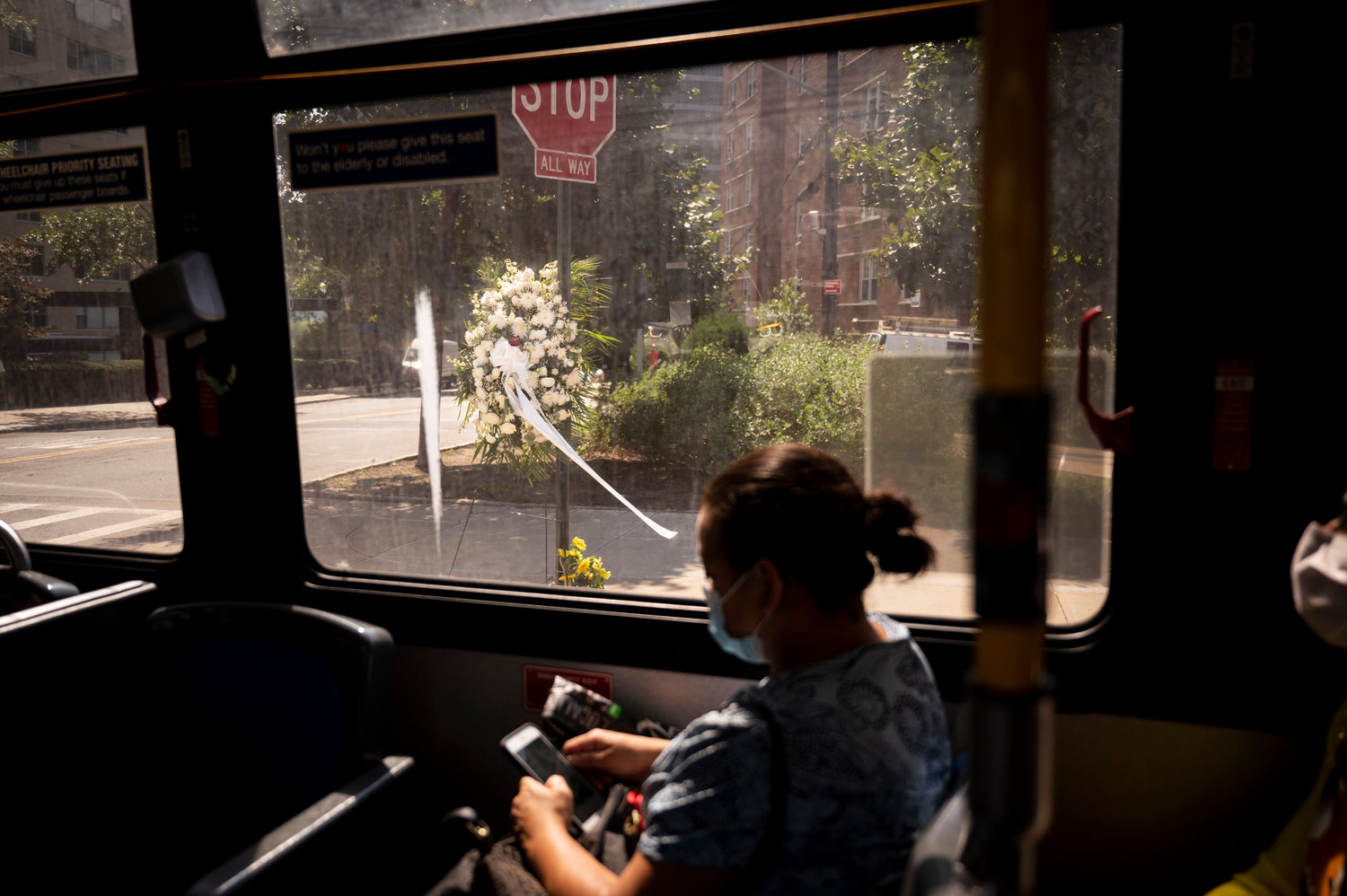 A wreath adorns the intersection of Kappock Street and Johnson Avenue where an express bus driver hit Ruth Mullen while she used the crosswalk. Lawmakers demand the city’s transportation department take swift action to ensure pedestrians like Mullen are safe when they are trying to do nothing more than just cross the street.
HIRAM ALEJANDRO DURÁN
Previous Next

Whether it’s something that’s gone wrong because there are more people walking, or because people are being more risky, or because the streets aren’t safer, we’ve got to get to the bottom of it.”
ALESSANDRA BIAGGI
By MICHAEL HINMAN

It once featured a stretch of dilapidated houses in a neighborhood known simply as Puddlers Row — “puddlers” the name given to those who worked in Spuyten Duyvil’s foundry, Johnson Ironworks. The dozen or so houses stretched along between Kappock Street and Johnson Avenue — roadways that were more neighborhood streets than thoroughfares at the time.

The southern end of Kappock suddenly veers east to meet Johnson, itself on a rather steep decline as part of the hilly environment that makes views of the city wonderful, but makes traveling through there problematic.

Puddlers Row, like most other things, became a victim of time and the need for growth. The houses were razed in the early 1950s to make way for what is now the 25-story 555 Kappock building. And that country-like intersection joining Kappock and Johnson became one of Spuyten Duyvil’s most heavily trafficked streets not just to cars, but also for two local buses and three express buses that rumble through almost every few minutes.

It was one of those buses, in fact, navigating the tricky turn from Kappock to Johnson that claimed the life of Ruth Mullen on the evening of Sept. 7. Mullen, who had lived in the nearby Winston Churchill co-op for more than 25 years, was using the crosswalk on Johnson, according to police, when the driver hit her. The 68-year-old died on the scene.

Mullen was known for her writing and her political activity, but what she really wanted was a traffic light on this intersection. Assemblyman Jeffrey Dinowitz pushed for the city to add a stop sign some years ago, but even during a news conference the state lawmaker held near the site two days later, downtown-bound buses could be observed rolling through the stop sign, and swinging through the left turn onto Johnson without even touching the brake.

“I don’t know exactly what happened Tuesday,” Dinowitz said. “I’m not here to point fingers at anybody. I’m not here to blame a driver, or the DOT, or anybody because we don’t have all the facts. But we have one fact, and that is that a valued member of our community is not with us anymore. And that is horrible.”

But the Assemblyman added he was not there to just add sentiment, but instead to take action. He called on the city’s transportation department to not just take its usual position of saying it would conduct a traffic study, but instead to act now.

“Examine this quickly,” Dinowitz said. “Don’t do a year-long study, and then possibly do something. But really move quickly.”

Dinowitz stopped short of demanding a traffic light at this intersection, but his state senate counterpart — Alessandra Biaggi — didn’t. She told The Riverdale Press that Mullen wanted a traffic light for that intersection, and that’s exactly what should happen. And also some speed cameras and other safety measures, too.

At the same time, the city — and the Metropolitan Transportation Authority — need to spend a lot more time enforcing the traffic laws that already exist, she added, especially as injuries, deaths and other data involving vehicles and pedestrians start to tick up despite Mayor Bill de Blasio’s Vision Zero plan designed to make streets safer.

“That means that something has gone wrong,” Biaggi said. “Whether it’s something that’s gone wrong because there are more people walking, or because people are being more risky, or because the streets aren’t safer, we’ve got to get to the bottom of it.”

As far as the senator knows, however, Mullen was doing everything right that Tuesday evening. She used a crosswalk, wasn’t reported to have been distracted by her phone, and did everything she needed to make the trip across safely.

“The fact that she did everything right, and this still happened, really sends chills down your spine,” Biaggi said.

Community Board 8’s traffic and transportation committee welcomed a new chair Monday night, Deb Travis, who called Mullen’s death “particularly tragic” and cited a need for something to be done. Just not by her committee, at least this month. Citing a “full agenda” focused on recent flooding caused by the remnants of Hurricane Ida earlier this month, Travis said her committee will discuss it in October “to make sure to give it the time and attention it deserves.”

Biaggi and other electeds are scheduled to meet with DOT commissioner Henry Gutman on Friday, with plans to sit down with de Blasio, too. While some might consider traffic safety issues a city problem, there’s a lot that can be done at the state level, the senator said, to make pedestrians and drivers feel more secure when trying to get from one point to another.

“There are a lot of different bills that have been introduced, namely by my colleague, Andrew Gounardes, because a lot of the traffic accidents that end up being fatal are happening in Brooklyn,” Biaggi said.

Gounardes introduced a package of safety bills last year that included safety ratings for vehicles showing how likely they could harm pedestrians or bicyclists, relaxing burdens of proof for prosecutors looking to charge careless drivers, and forcing any intersection — whether it has an active crosswalk or not — to be a zone where vehicles always have to yield to pedestrians.

And then there’s Sammy’s Law, named after 12-year-old Samuel Eckstein, who was killed by a reckless driver in Brooklyn in 2013. The bill — which would allow New York City to lower speed limits without getting approval from Albany first — was introduced by Sen. Brad Hoylman last December, has passed the senate, but is still stuck in committee at the Assembly.

Dinowitz is a co-sponsor of the lower chamber version of the bill, and pushed for his colleagues to get it passed when they return to the capital in January.

“I shouldn’t be lowering the speed limits,” the Assemblyman said. “The city council should be.”

While Mullen would likely be happy to finally see significant attention paid to this troublesome intersection, many of her friends — like Helen Krim — would have preferred that attention not be the result of losing a close friend.

“She was a beautiful light — kind of a quixotic idealist,” Krim said. “She was always trying to make the world better, and I’ll miss her. I think we all will.”