Legendary jazz drummer sits in at An Beal Bocht Cafe 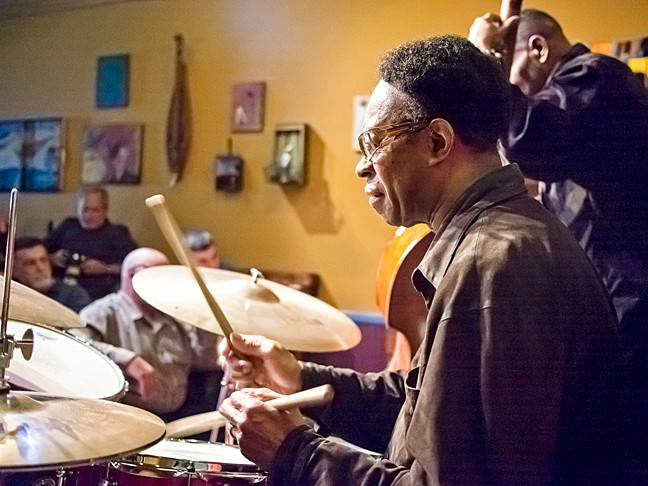 Mr. Hayes, who is now 76 years old, has enjoyed a long and colorful history on the jazz scene, having played alongside such legendary figures as saxophonist Dexter Gordon and pianist Horace Silver.

The quartet never performed or rehearsed before their recent show.

However, that was no problem for Mr. Hayes, who said he was in the neighborhood and wanted to play with Mr. Alexander and his accompanist.

Mr. Alexander, whose most recent composition is titled “Touching,” said a theme in jazz music sets the tone and melody. He compared the theme in a musical composition to a conversation that surfaces spontaneously between two strangers. Similar to words, he says musical notes can be used in various arrangements, giving each composition a unique meaning and indentity.

Manhattan School of Music student Ben Ruben was among about 20 people who attended the first set in the tightly-packed room of candle lit tables. Mr. Ruben, who is 21, said he is studying the bass guitar and hopes to play in a number of different bands some day. A friend introduced him to Linda’s Jazz Night a year ago. He invited a group of friends from his school to listen to Mr. Alexander’s quartet last week.

To aspiring musicians like Mr. Ruben, Mr. Alexander suggested that it takes determination to survive and rise among the fierce competitiveness of jazz musicians. “Tremendous practice and perseverance, overcomes talent,” he says.

Linda’s Jazz Nights, hosted by co-founder Linda Manning, who is also a producer, performer and playwright, take place on the first Wednesday of each month.

An Beal Bocht Café is located in Riverdale at 445 West 228th Street. The Joe Farnsworth quintet is featured at the café’s next jazz night on Wednesday, March 5. For more information visit, www.anbealbochtcafe.com.