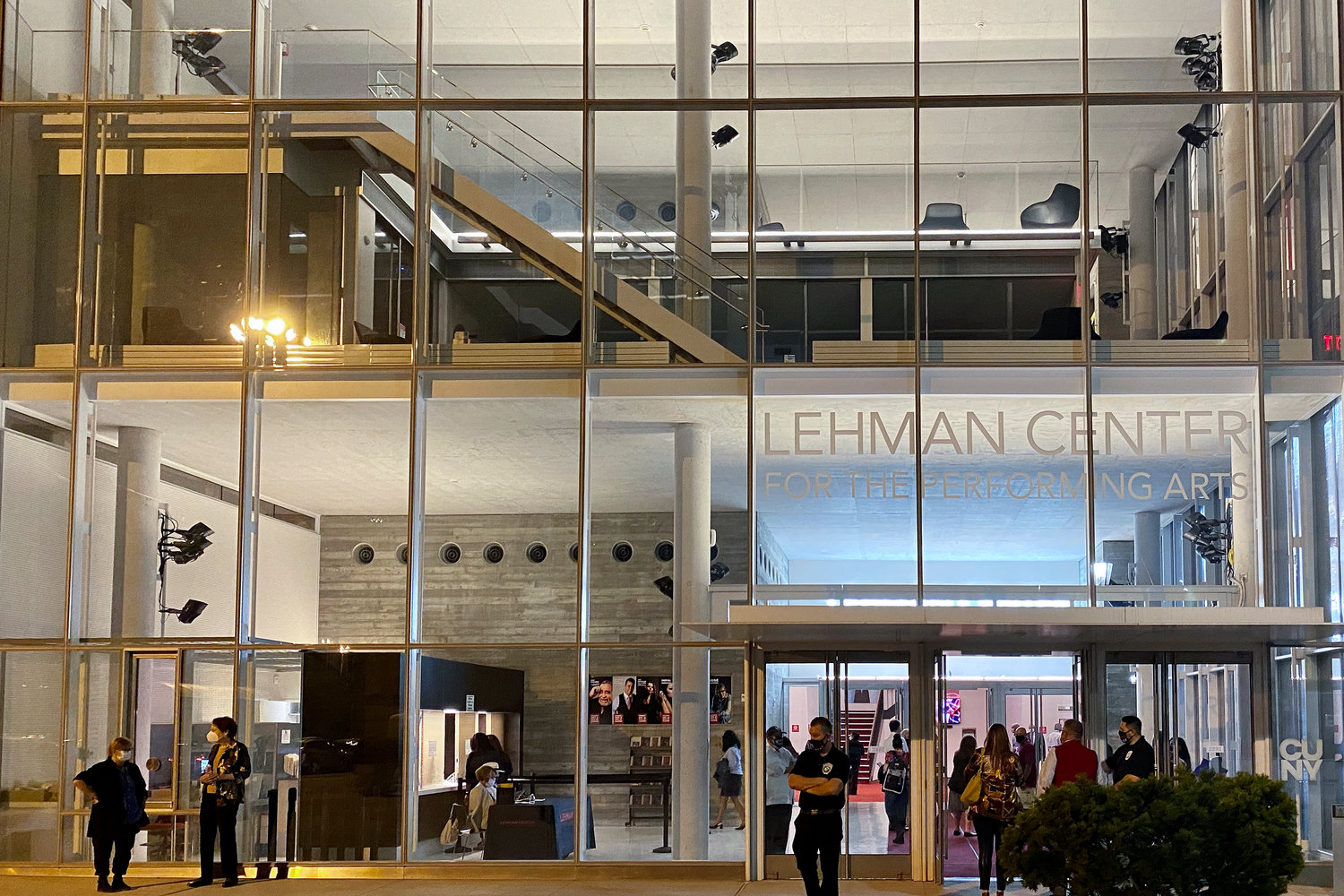 For the first time in 19 months, the front doors of the Lehman Center for the Performing Arts reopened, welcoming audiences to hear Puerto Rican sensation Andy Montañez. When the venue shut down in March 2020, many longtime patrons chose not to accept refunds — a key factor that allowed the center to reopen this month.
TRINA MANNINO 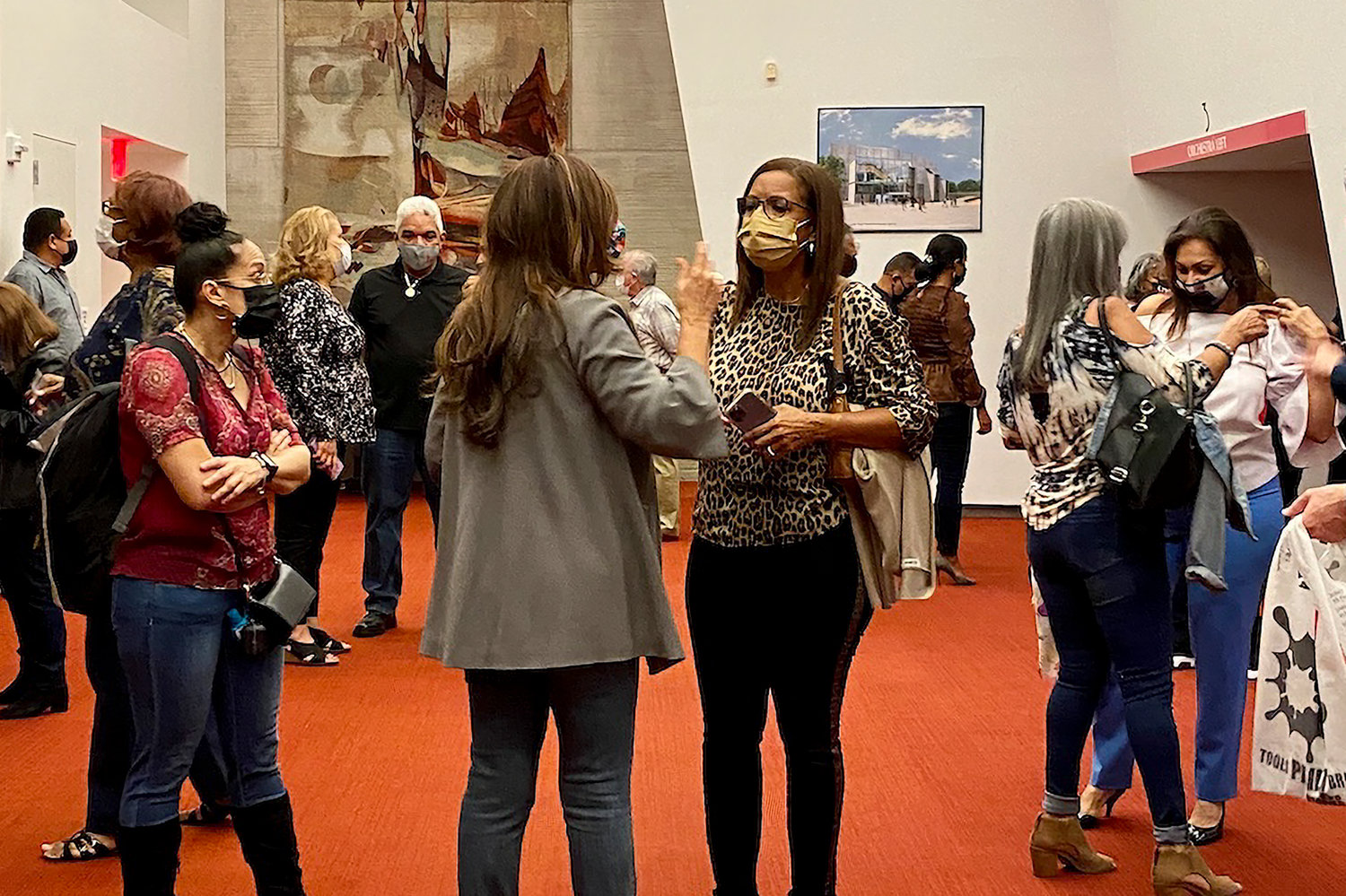 Anyone visiting the Lehman Center for the Performing Arts must be vaccinated and wear a mask, but still, it was like a family reunion for many, getting to see each other for the first time in more than a year.
TRINA MANNINO 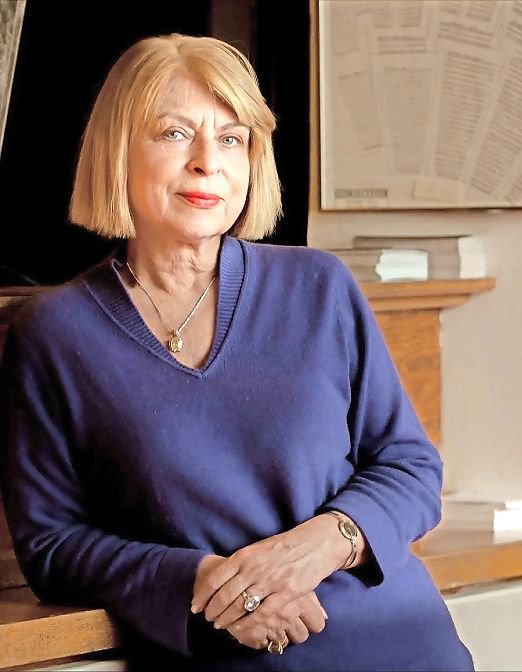 Eva Bornstein is executive director for the Lehman Center for the Performing Arts.
Previous Next
Shows at Lehman

Lehman Center for the Performing Arts welcomes Tito Nieves and Friends during a performance Saturday, Oct. 16.

India Inmensa is up next on Saturday Oct. 23, with Hector Acosta headlining the stage on Saturday, Nov. 20.

For a complete schedule and tickets, visit LehmanCenter.org.

One of the Bronx’s largest cultural institutions, the Lehman Center for the Performing Arts, reopened this month after a 19-month hiatus in the wake of the coronavirus pandemic.

The venue’s return signifies not only the return of live performances on the CUNY college campus’s stage, but also a reunion between Lehman Center’s tight-knit group of patrons and staff members.

“My commitment to this center comes from my heart,” the arts center executive director told the crowd on opening night.

Her words were followed by the first program of the season, headlined by music legend Andy Montañez with The Mambo Legends Orchestra and Patty Padilla.

While it’s the performances that light up the stage, it was Lehman Center’s faithful audience that helped keep the venue afloat during its long dark period throughout the pandemic. When it shut down on March 9, 2020, Lehman Center still had six shows remaining on its spring schedule. Because of that, 90 percent of its income vanished in almost an instant.

Yet few people asked for refunds, Bornstein said. “Those funds sustained us for a very long time, until we got grants and other support. Their money helped us survive.”

Funded through federal COVID-19 relief funds backed by U.S. Rep. Adriano Espaillat and President Joe Biden, Lehman Center captured more than $760,000 in grant funds out of some $21 million that ultimately ended up in the Bronx.

In all, the Lehman Center picked more than a million dollars in funding.

“It was the most important grant I ever applied for,” Bornstein said of the shuttered venues grant. “Without that grant, I doubted whether we would be able to reopen.”

In fact, Lehman Center was one of the biggest recipients of the shuttered venue grant, behind only the Bronx Zoo and the New York Botanical Garden, which picked up $10 million each.

Opening night felt more like a family gathering rather than a stuffy theatre event. Ticket-buyers embraced and air hugged wearing rhinestone and patriotic masks in the lobby. They clapped and swayed to the music while their toes tapped in the aisle. A few even waved Peruvian and Puerto Rican flags.

Montañez — El Godfather de la Salsa who first found fame with El Gran Combo before striking out on his own — playfully bantered with his bandmates and concertgoers.

While Lehman Center programs a variety of dance, music and theatre performances from around the globe, it’s one of the few venues in the region that presents several Hispanic acts each season, drawing patrons like Bronx-raised Migdalia Rivera, who now lives in Brooklyn. She described the night feeling uniquely Latina.

“We always come back and unite,” she said.

To give back to her artistic brood, Bornstein celebrated the reopening of Lehman Center with a free concert last weekend featuring the Brazilian All Stars. Other performances the rest of the season have tickets ranging between $35 and $100 — but there are discounts for senior citizens, CUNY students, and those who buy tickets for multiple shows at the same time.

Funding, albeit critical, was only part of Lehman Center’s reopening puzzle. Located on the campus of Lehman College — but functioning as an independent non-profit — Lehman Center worked with the CUNY school to create a COVID-19 safety plan that jived with recommendations from the Centers for Disease Control and Prevention, as well as mandates set by the college.

That meant, at least for this season, those attending shows at the Lehman Center must be vaccinated and wearing facial masks.

Luis Silva said returning to the Lehman Center was exciting, but also “a little nerve-racking.” He and wife Carmen, who frequently attended shows prior to the pandemic, welcomed the center’s strict vaccination policy.

Patrons aren’t the only ones required to be vaccinated. Staff members and visiting performers must be, too. While travel restrictions and vaccination access abroad may cause a few of this season’s acts to be postponed, Bornstein remains undeterred. She embraces the adage of the show must go on.

The director, who has been known to step into the box office when there’s a rush, credits her three-person, full-time team, along with consultants and a part-time staff of ushers, backstage crew and box office agents for banding together to make whatever needs to happen, well, happen.

Bornstein is now working on adding more programs for the spring, including a hip-hop event tentatively scheduled for next April. The show will feature an international lineup — some of whom started here in the Bronx.

While the center resumes its pre-pandemic breakneck pace, Bornstein soaks in the start of the monumental season.

“It was an unbelievably moving experience to be back on that stage,” she said.