Lehman wants Bronx to be tech market’s next stop 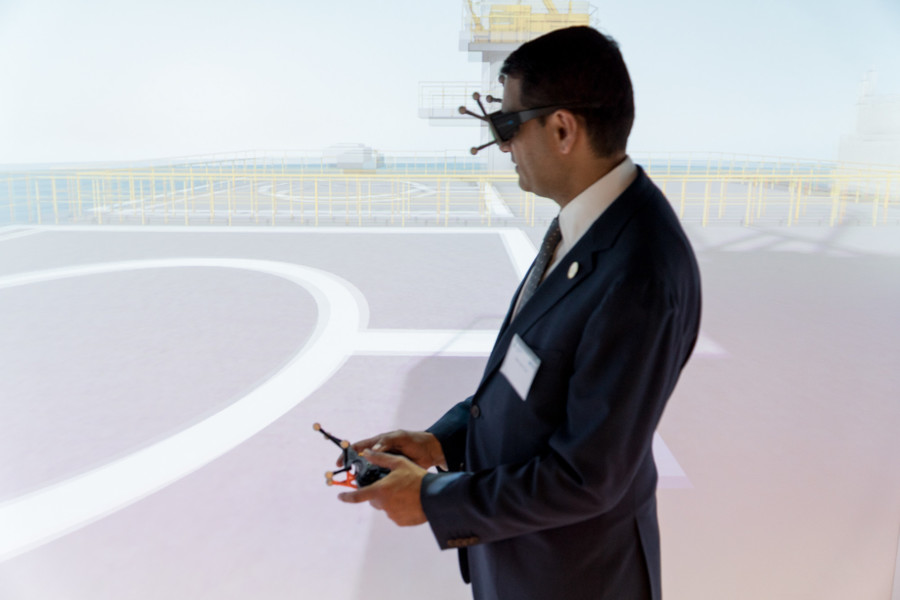 Lehman College president José Cruz experiences virtual reality in the Eon’s Reality Icube. Visitors could experience virtual reality first-hand as they are transported to a rollercoaster ride or walk on an oilrig stationed in the middle of the ocean. The school, in collaboration with Eon Reality, launched a Virtual Reality and Training and Development Lab and an 11-month non-credit course, which includes animation and web design.
Julius Constantine Motal 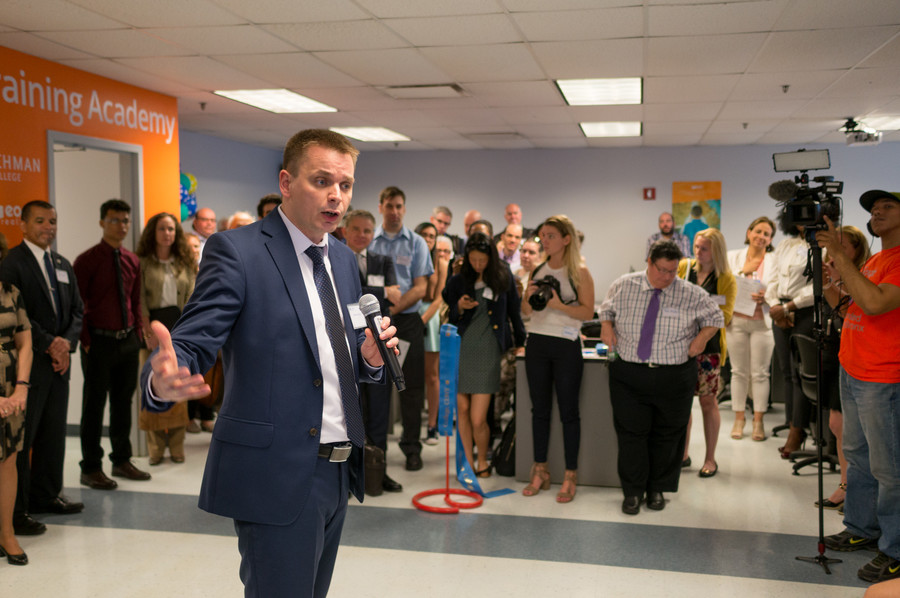 Eon Reality’s global education director Marcin Kasica talks about the new facility at CUNY on the Concourse. The company expects to hire some of the students who are part of the virtual reality training program.
Julius Constantine Motal
Previous Next
Virtual vs. Augmented reality

In virtual reality users wear a set of goggles or closed visors allowing them to feel as if they were in different place.

For example, the user could experience a rollercoaster ride or a walk along Riverdale Avenue while physically standing somewhere completely different.

With augmented reality, a user can collect additional information from something visual using a device like a smartphone. For example, if you were standing at West 231st Street and Broadway, information such as a closet coffee shop might appear on the device.

Or, the user could put on a pair of specially designed glasses, providing such information in the lens.

Lehman College has opened its new Virtual Reality and Training and Development Lab, offering students the chance to study the burgeoning technology inexpensively. It is the only such programming currently being offered at a college in the Bronx.

Lehman is pushing the virtual reality lab as it seeks to position the Bronx as the stop for new talent in the tech industry while providing the community with a convenient and affordable way to gain the knowledge. Virtual reality takes a person into a “different place,” meaning user feel as if they are transported to another location.

The virtual reality Icube at the school creates a simulation like walking on an oilrig in the middle of the ocean. An augmented reality adds something to the space a person already is in.

The app Pokemon Go, for example, allows characters from the game to appear on sidewalks and other places around Riverdale, all seen through the smartphone.

“It’s really mind-blowing,” said Julio Montas, 31, who is enrolled in the program and lives in Washington Heights. “Normally it would be downtown (Manhattan) or in Brooklyn ... just having anything around uptown, Harlem, the Bronx that has to do with tech, it’s pretty convenient.”

“It’s a huge opportunity here in the borough,” said Edgar Roque, adding that augmented reality programming would continue to be the wave of the future. Roque, 43, is currently a network engineer and wanted additional skills to adapt to a changing industry.

Lehman senior Justin Acosta said the program would enhance what he is learning as he completes his degree in computer science, especially when it comes to learning various types of software like Java. He plans to study at Lehman part-time and attend the virtual training academy, which meets weekdays in the evenings and all-day Saturday for the next 11 months.

“I calculated that you get a degree’s amount of work here,” Acosta said. The curriculum includes web design, animation and 3-D graphics — a rigorous course load that’s similar to his studies as a computer science major. The bonus, he added, is that he could have a job lined up at the end of the course since Lehman’s programming partner, Eon Reality, said it would hire some of the students, although it wouldn’t share how much they’d pay them.

Eon’s involvement is part of a public-private partnership with the school, said Ronald Bergmann, Lehman’s vice president of information technology and chief information officer. Eon covers the equipment, software and training resources, and the school provides in-kind contributions such as administrative staff. Lehman’s School of Continuing and Professional Studies oversees the initiative.

Eon has created software programs for the aerospace, education and travel industries. For example, the company created an augmented reality program that show workers the basics of diesel engine maintenance by creating a series of augmented reality lessons, according to its website.

Using virtual reality, the company designed a program where users can tour the Palazzo Medici’s Magi Chapel in Italy and see the fresco paintings from the Renaissance era.

At the end semester, the companies is looking to hire a few students who show creativity and potential

Marlene Cintron, president of the Bronx Overall Economic Development Corp., which looks to bring business opportunities to the Bronx and support companies already in the area, said the Eon/Lehman partnership promotes the Bronx as a place for tech companies to recruit new talent.

“We’re banging the drum,” she said. “We have tech businesses that are already here. Some of them are start-ups. Some of them are companies that we’ve already financed. But, certainly, what we are looking for is for major tech companies to begin to take us seriously and begin to collaborate with our current companies.”

The state labor department projected nearly 140,000 jobs statewide would be added over the next 10 years.

The non-credit course, which started late last month, is located at Lehman’s satellite campus at CUNY on the Concourse, 2501 Grand Concourse. Non-CUNY students pay $600, and Lehman employees and students pay $500.

A continuing education course at an educational institution like the School of Visual Arts is nearly $300 to $500 per class. Those classes last eight to 10 weeks, while the Lehman program is 11 months.

“Taking this course is knowing the fundamentals of VR, and then … I can take this knowledge from here and just apply it anywhere,” Montas said. “It’s like a gift.”