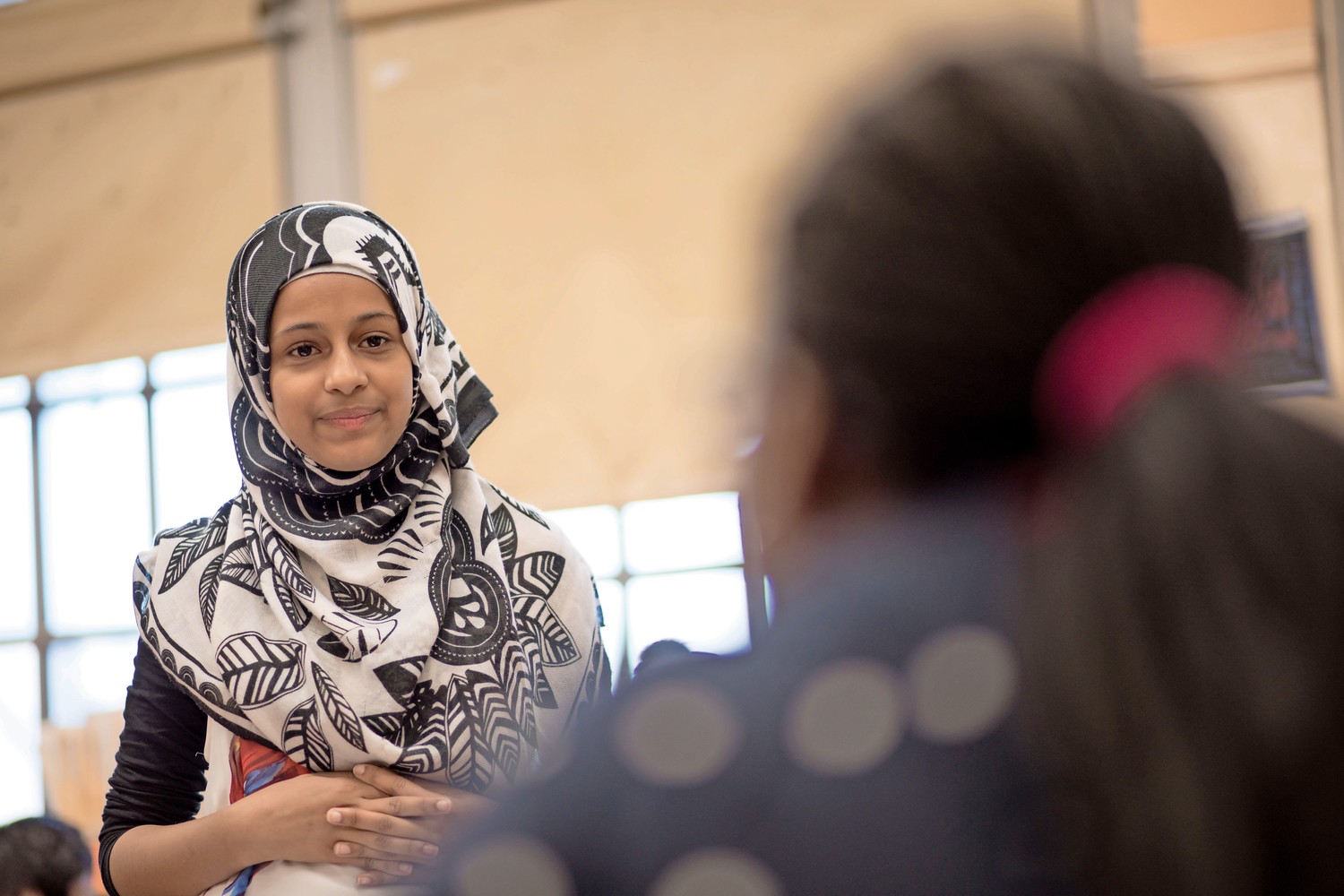 Reem Othman cross examines Hailey Gyameral during a practice run of a mock trial at P.S. 95. Students there will compete in the Thurgood Marshall Mock Trial Competition.
JULIUS CONSTANTINE MOTAL 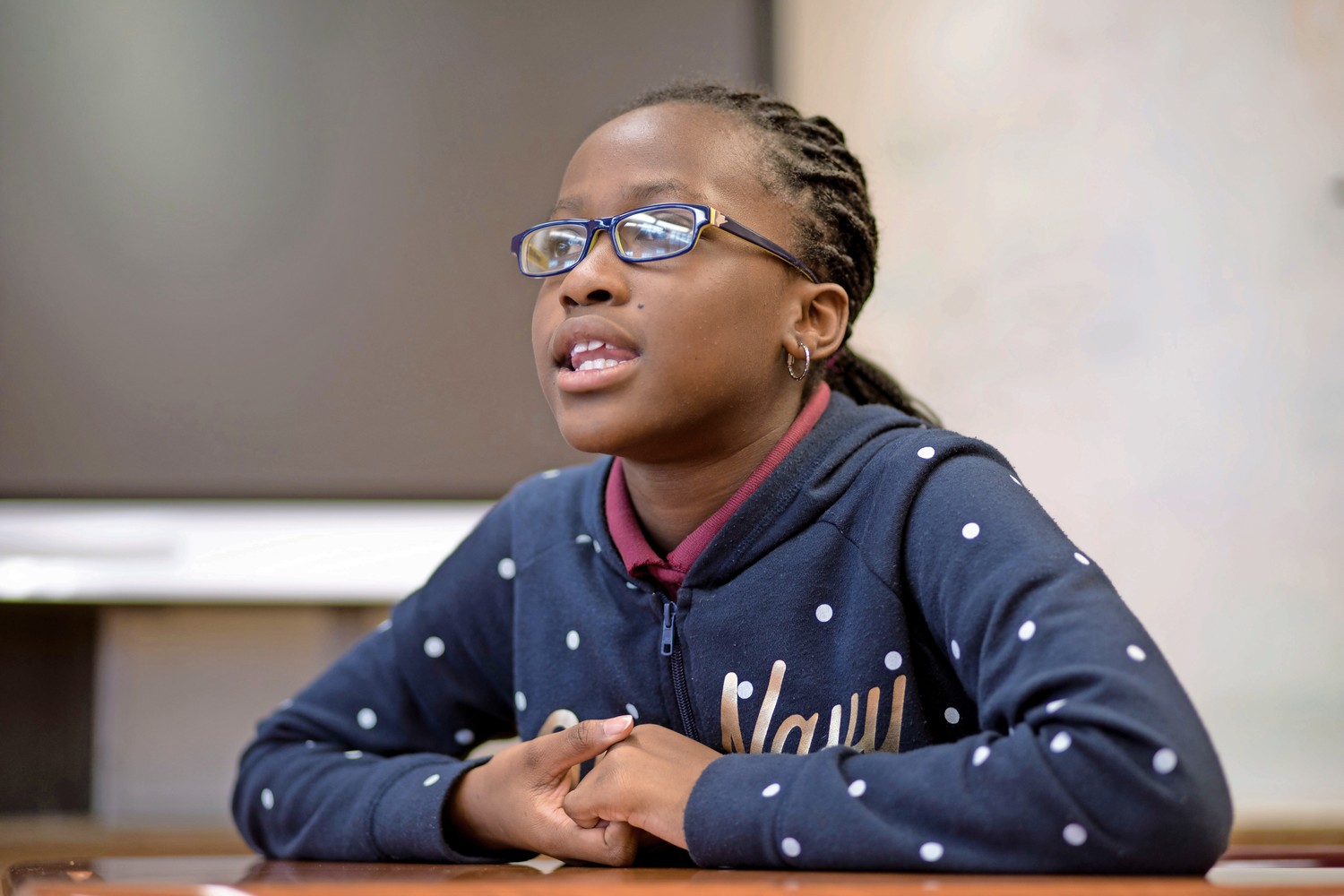 Hailey Gyameral responds to a question during a direct examination in a practice run of a mock trial at P.S. 95. Students there will compete in the Thurgood Marshall Mock Trial Competition.
JULIUS CONSTANTINE MOTAL 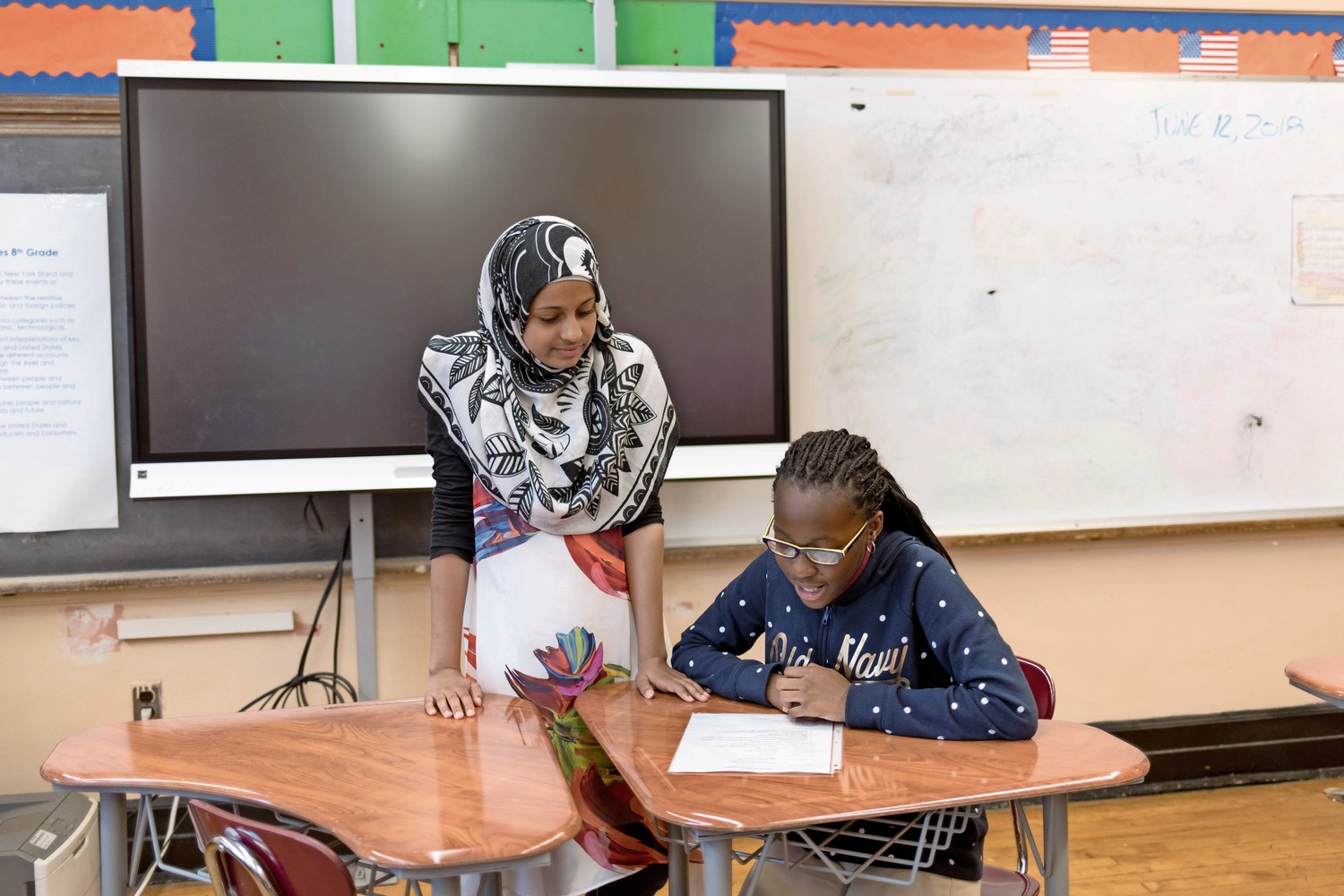 Reem Othman, left, asks Hailey Gyameral to read a portion of a document obtained in evidence during a practice run of a mock trial at P.S. 95. Students there will compete in the Thurgood Marshall Mock Trial Competition.
JULIUS CONSTANTINE MOTAL
Previous Next
By SIMONE JOHNSON

A recent manslaughter and domestic abuse trial at the Bronx County Hall of Justice had some unexpected members in the audience: Middle-schoolers from P.S. 95-Sheila Mencher.

They were there as part of their preparation for the Thurgood Marshall Mock Trial Competition, where students are trained to be lawyers through contests that simulate court cases — inside and outside of the courtroom and classroom.

“Some were shocked, unfazed and a little scared,” said Andrea Faulkner, a liaison between the program and P.S. 95. “But what the judge does is she forewarns us, and the students were really excited about it.”

When the students were brought to the courthouse, they were given the chance to learn from actual attorneys, interacting with witnesses and the judge. The kids then brought that knowledge back to their classroom, practicing what they just learned.

“It gave me a different perspective and was a very nice experience,” Johnson said. “I wanted to learn the law, and I was looking for a fun activity to do with my friends.”

During their practice, Johnson played a witness who observed incriminating behavior done by the suspect being tried. While a student prosecutor questioned him, the seventh-grader maintained a somber tone, yet spoke loud and clear so the entire classroom could hear.

Despite the practice, P.S. 95 did not place in last month’s competition. Still, the experience of turning their classroom into a courtroom simply by shifting school desks and chairs created a near-real world experience.

The students who represented the defense sat on one side, while the prosecution sat on the other.

When the kids compete against one another, they are given a loose model of a court case filled with facts and evidence as thick as any real legal manuscript. Ultimately, it’s up to the students to fill in the rest using their knowledge of law — with a touch of imagination.

“They gave us a book and all the things we needed were there, and we focused on the evidence and had to come up with questions,” said Reem Othman, a seventh-grader who played a prosecutor during the practice mock trial.

After she questioned the witness and shared with the jury her reasons why she felt the defendant was guilty, her classmates on both sides applauded her performance.

That was a big boost of confidence for Othman, who said she wants to be a surgeon in the future, but could consider being a lawyer.

The Thurgood Marshall Mock Trial Competition began in 1997, designed to give middle school students an encouraging view of the judicial system. The P.S. 95 students had a chance to meet judges like Elizabeth Taylor of the Bronx County Supreme Court, and get tips from lawyers like Dan Padernacht.

The students also learned what it means to be a part of a criminal trial, and what prosecuting and defense attorneys, and witnesses and jurors must do in court.

Seventh- and eighth-graders from 35 public and private schools across New York City and Westchester County compete annually against one another.

“I think it’s really good to expose them to the criminal justice system because of attitudes toward the police and how the system works,” said coach and P.S. 95 social studies teacher Matthew Pansy. It gives students a deeper legal understanding, he added, which is important for kids to grasp.

It also gives the teens a different outlook on the law, Faulkner said. They have to understand the law if they want to make objections and play as attorneys, while also helping them develop other skills.

“And when I am doing my cross-examinations, it really helps me to build up my confidence.”