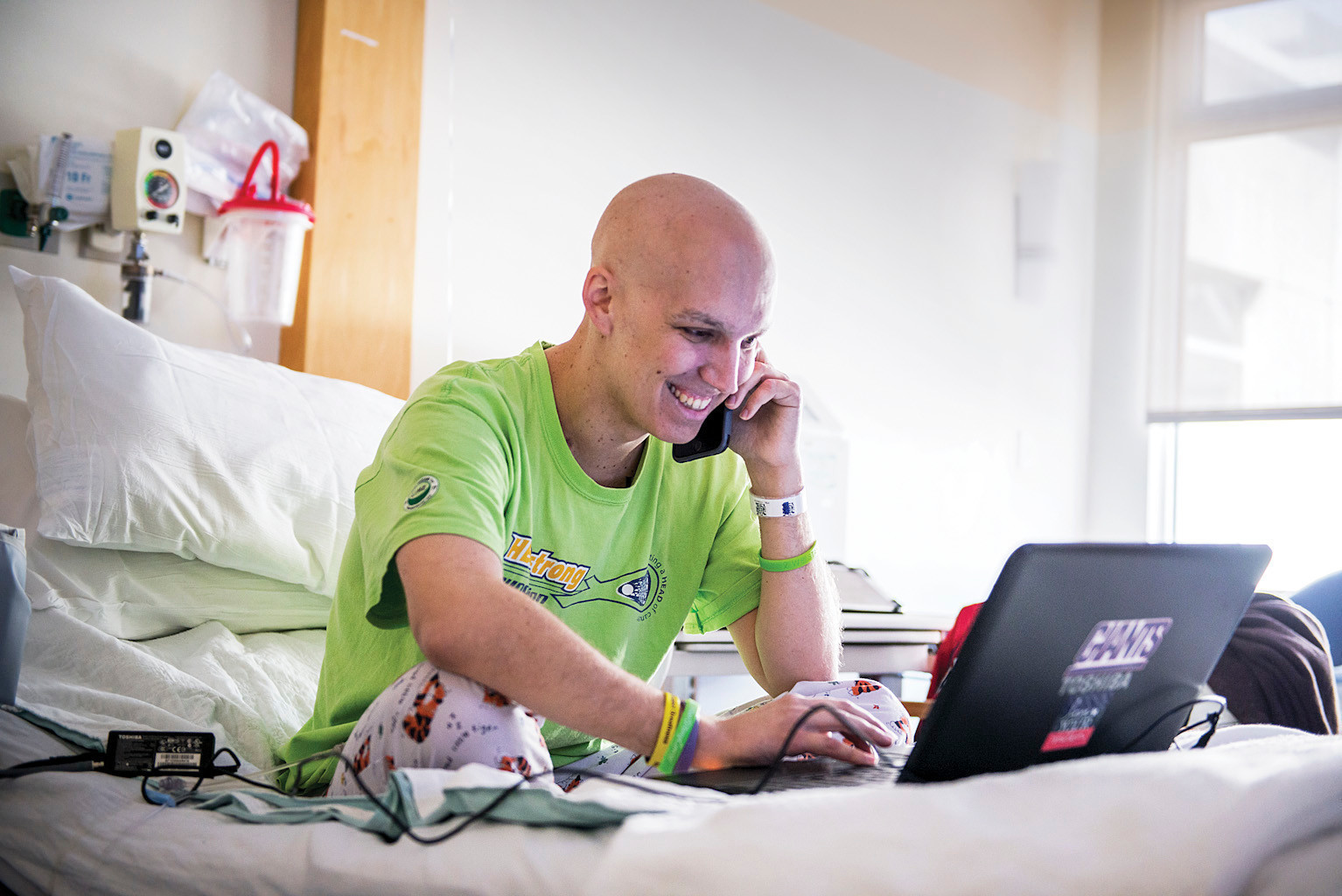 Manhattan College sports announcer Christian Heimall, 25, sits in his room in the children's wing of the Westchester Medical Center on Monday. A cancer patient, he is due to be released on April 7, after four months of treatment.
Adrian Fussell / The Riverdale Press 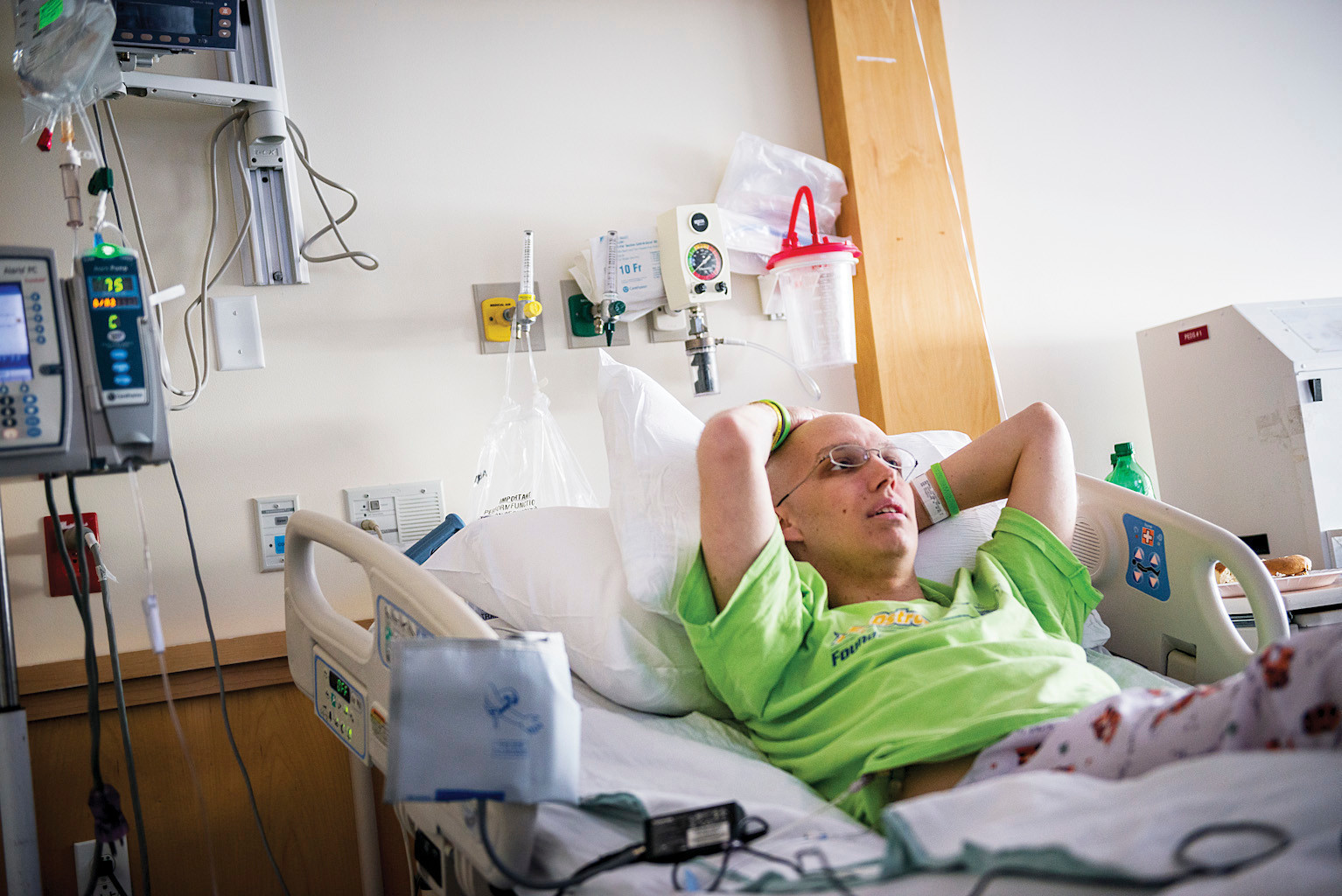 Christian Heimall is not used to the view outside his room at the Westchester Medical Center, even as it has become his second home for the better part of the last four months.

Heimall, 25, the popular play-by-play man for Manhattan College basketball, is used to spending his winters sitting courtside at Draddy Gym, calling the game action and doing post-game interviews with Jaspers head coach Steve Masiello and the players he now considers his family.

But this winter didn’t exactly go according to Heimall’s game plan. A persistent sore throat in October that he could never shake eventually led to an appointment with a throat specialist and a date that will be forever seared into Heimall’s memory. It was Dec. 9, 2014.

“He takes one look at the back of my throat within three minutes he sits down and says, ‘You have Lymphoma.’” Heimall said from his hospital bed. A tumor was growing on his tonsil and he needed to have emergency surgery and begin treatment.

Nine days later, after informing his family, he underwent surgery that revealed a six-centimeter mass. Five days later, on Dec. 23, Heimall was cleared to go to El Paso, Texas for a Christmas visit with his family. But while waiting in the Dallas-Fort Worth airport for his connecting flight, he received even more staggering news.

“They told me I had diffuse Large B Cell non-Hodgkins Lymphoma, which is a form of blood cancer,” Heimall said. “I was like, ‘OK, where do we go from here?’”

The plan was to meet with his doctors upon returning from Texas. But first Heimall needed a dose of normalcy in his life. So he flew to Buffalo on New Year’s Day to be behind the mike for Manhattan’s games at Niagara on Jan. 2 and at Canisius two days later. The normalcy didn’t last, however, as January and February became a blur of doctor visits, tests, chemotherapy treatments and extended hospital stays.

January brought PET scans, CAT scans, bone marrow biopsies and a spinal tap, all necessary in order to correctly stage his cancer. And while Heimall nervously awaited his results, Manhattan games slipped off the schedule with Heimall sidelined.

Heimall watched the Super Bowl from his hospital bed while undergoing his first of four rounds of chemo. But just five days later, he was back on the air for Manhattan’s home game with Canisius. He also called the Manhattan women’s game the next day and the men’s game at Rider University that Sunday. Three broadcasts in three days after a 17-day hospital stint. Call it his love of the game.

Heimall managed to continue to work, calling both Manhattan’s games with Iona and Fairfield, the latter on Feb. 15. The next day it was back into the hospital for Chemo, Round 2. Heimall’s hope was that his treatments would not play havoc with his schedule as February turned to March, college basketball’s most celebrated month. But after managing to make Manhattan’s Senior Day game on March 1, Heimall knew something was wrong.

With pain so debilitating that he was forced to lie down on the back seat of his mother’s Jeep following the game, Heimall developed a 103-degree fever and a dangerous colon infection.

The ensuing hospital stay cost Heimall his shot at calling Manhattan’s games at the MAAC Tournament in Albany, the one the Jaspers won to advance to the NCAA Tournament. It also cost him the chance to join Manhattan for its NCAA tournament game with Hampton. Not exactly the type of March Madness Heimall had in mind.

Despite spending 50 days in the hospital since Jan. 16 until his release on Tuesday of this week, despite not being able to achieve his goal of calling Manhattan’s MAAC and NCAA games, the victory Heimall was handed last week dwarfed any Manhattan win he could have witnessed.

“March 31 at 2 o’clock, I’m just never going to forget,” Heimall said. “That’s when my oncologist came in and told me I was in complete remission. That day there was a lot of crying.”

Doctors have told Heimall that his odds of beating his cancer now sit between 85 and 95 percent and it has Heimall itching to get back to doing what he loves — being around his Manhattan College family, one that has inundated him with phone calls and texts through his four-month ordeal.

“I’ve grown to love Manhattan and working at Manhattan so much,” Heimall said. “Coach Mas has called me many times to ask how I’m doing. And one day I went to Manhattan to watch a practice and  [assistant] coach [Rasheen] Davis saw me and literally screamed, ‘Voice of the Jaspers!’ and the entire team stopped practicing and they all came over to see me.

“It’s a family over there. I don’t know how many coaches will call up their broadcaster as many times as Steve has during my time in the hospital.”

It’s been a harrowing four months for Heimall and his family. But with the news he received on March 31, the announcer is already counting the days to next season’s tipoff.