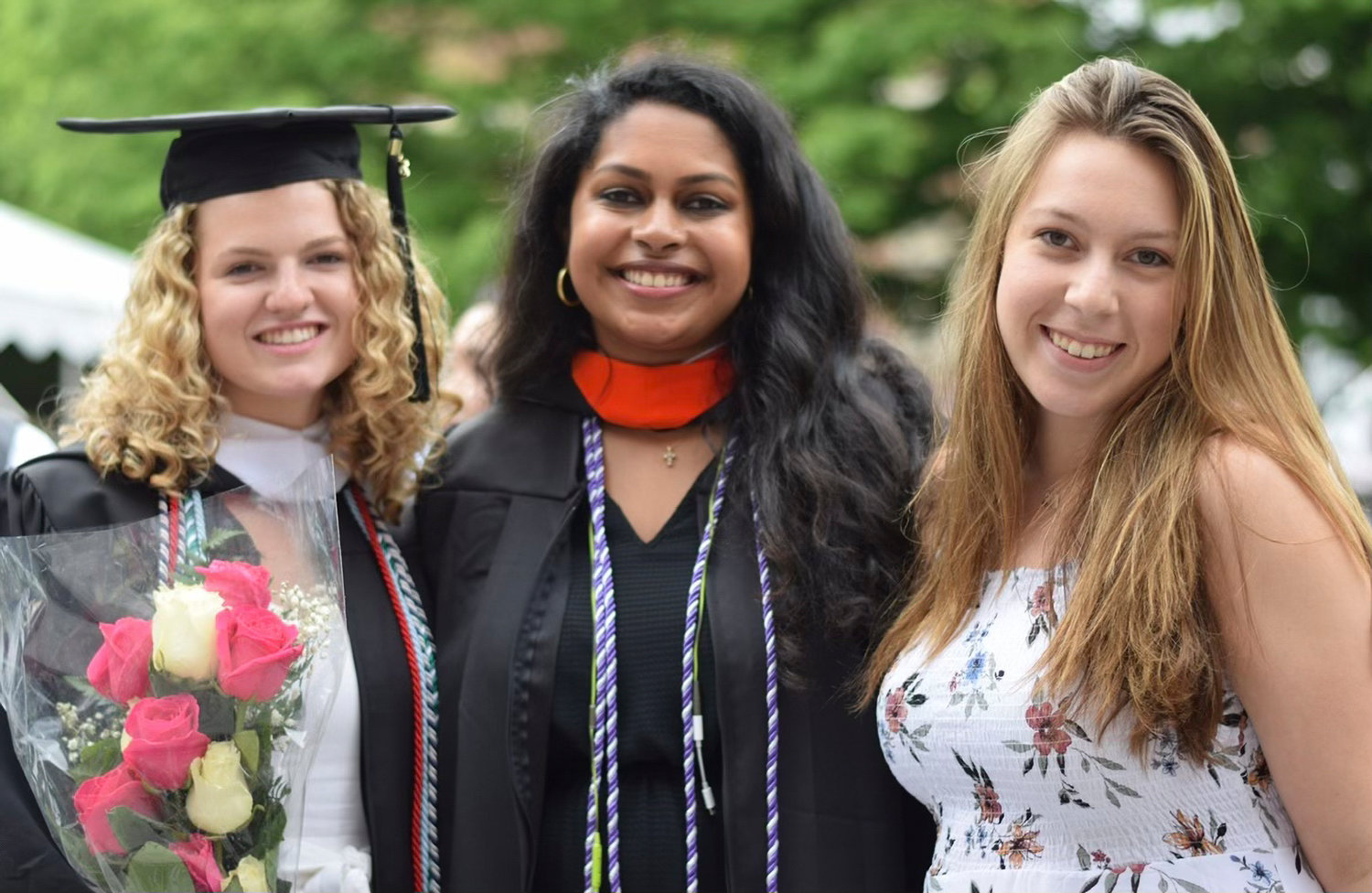 Sydney Waitt, far right, is one of a number of students with concerns about traveling to the Meadowland Exposition Center in New Jersey for Manhattan College’s graduation. Being immuno-compromised, she can’t say she's not worried to share indoor space among people who may not be vaccinated.
Courtesy of Sydney Waitt
By STACY DRIKS

Unlike some of her peers in recent years, Sydney Waitt will get to graduate from Manhattan College at an in-person ceremony. But she won’t walk in the school’s Draddy Gymnasium. Instead, she’ll get her degree in New Jersey.

And she’s concerned — not just about how far out of the way the ceremony will be, but why Manhattan College reportedly picked this remote location in the first place: lax rules on vaccination. And as someone who is immuno-compromised, Waitt says she has every reason to be worried.

“My whole family is vaccinated,” she said. “Being vaccinated is really important to me.”

Waitt has been cancer-free for five years. As soon as the Centers for Disease Control and Prevention gave her the green light to get the COVID-19 vaccine, she was the first in line.

To its benefit, Manhattan College has been strict with its coronavirus mandates, Waitt says, which is why she finds it so confusing the school would suddenly change course for commencement ceremonies. The college had decided earlier this year it would host the ceremony in the Meadowlands Exposition Center in Secaucus.

Waitt feels like the college wanted to bend the rules and didn’t care what students and their parents had to say. By the time school provost Steven Schreiner — responsible for the college budgetary affairs — announced the change, Manhattan College had already signed contracts with the Meadowlands.

This indoor space is far better than what the school might have had otherwise, Manhattan College spokesman Pete McHugh said. “A tent doesn’t solve the threat of lightning. We felt that the Meadowland Expo Center provided the best choice.”

While there aren’t many Manhattan College students unvaccinated, Waitt said, they do exist. They just aren’t on campus, since returning to the greater Riverdale-area school required proof of vaccination, outside of medical or religious exemptions.

“New York City continues to have some of the most restrictive event guidelines in the region, and has released new requirements too late for advanced planning,” Schreiner said. “Commencement takes significant advanced planning, so this decision needed to be made now.”

At the very least, Manhattan College should have hosted the ceremony outdoors, Waitt said. The Meadowlands can hold up to 5,000 people, which is supposed to be more comfortable with better air-conditioning compared to the indoor gymnasium with half the capacity space.

Lehman College and the College of Mount Saint Vincent are both keeping their outdoor on-campus tradition.

“We set up a tent structure so that folks can have coverage on that day,” said Jermaine Wright, Lehman’s vice president of student affairs. “But it’s so excruciatingly warm.”

The Mount will erect a tent on their Great Lawn not far from the Hudson River. It’s expecting a crowd of 2,600 people, including graduates and guests.

Lehman will mandate that everyone who comes to the ceremony be vaccinated.

Meanwhile, back at Manhattan College, students are becoming frustrated.

“Me and my three roommates actually like drafted a petition and sent it around,” Waitt said. And then there’s how to get there.

Schreiner told The Riverdale Press he addressed the transportation issue.

“We worked with student leadership, who also created a survey for the student body to share their thoughts,” the provost said. “There have also been very positive comments, especially surrounding being together as a community at commencement — something we were not able to do for two years.”

Students and family members will take buses to the ceremony, Schreiner said. Proof of vaccination, however, is not required for public transportation in the area.

Maya Tirone-Goehring is not immuno-compromised, but her father is, telling The Quad she has a lot of issues with sharing a crowded close space on a bus with potentially unvaccinated people.

The inconvenience for families to attend New Jersey is a topic of discussion because mothers, fathers, grandparents, and other members of the families are traveling from different continents, Waitt said. Getting a ride from the airport by the school is unlikely.

“I think that there was like very little done on the part of the provost, the administration and Manhattan to make sure that they were thinking of everyone,” she said.

She can somewhat relate because her family lives in Maine and it can take up to six hours to drive to New Jersey.

Waitt’s mother and father would need to leave before sunrise to arrive on time to the 10 a.m. ceremony.

And then after the ceremony, everyone will have to hike back to campus to celebrate.

“After we’re in New Jersey, everyone’s going to be coming back to Manhattan College anyways for photos and food and hanging out with each other,” Waitt said. “So, it’s just so inconvenient that they chose to do this.”

The college’s planning group looked into other venues in the area, officials said, but were either booked or simply unavailable.