A screenshot shows the virtual reality space created by Mursion, a company whose VR software can be used to explore new methods of treatment. The program is meant to give students like those at Manhattan College social and intrapersonal skills when dealing with patients undergoing radiation therapy.
Courtesy of Mursion 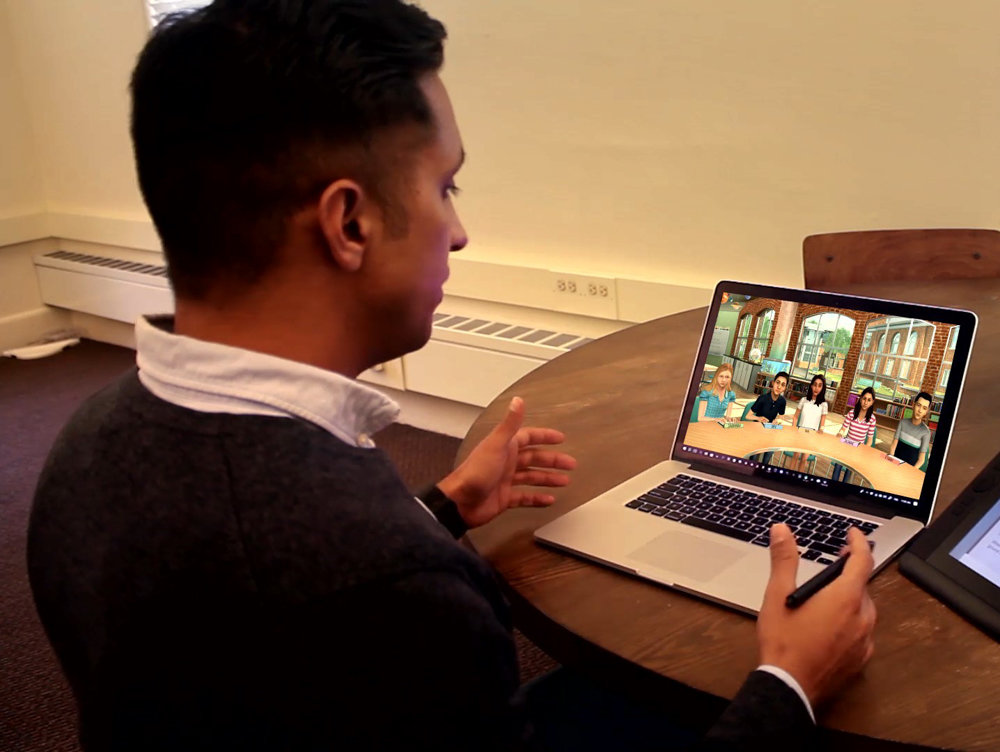 Mursion is the company behind a virtual reality program used by institutions like Manhattan College that creates digital representations of people that can be used in a clinical setting to explore new methods of treatment.
Courtesy of Mursion
Previous Next
By SIMONE JOHNSON

Manhattan College is taking learning to the next level with virtual simulations and avatars. It’s created a virtual environment of a radiotherapy treatment room, also known as VERT, to help students experience radiation therapy procedures without having to leave the classroom.

Sara Silverstein, the clinical coordinator for the radiation therapy technology program at the school, believes it’s already given her students a significant hands-on glimpse into the world of cancer treatment, providing training that could easily be compared to an actual internship.

Silverstein’s classroom uses a three-dimensional program that gives students a closer look into the technicalities of radiation therapy. Such therapy is important when it comes to cancer treatment, using a linear accelerator machine to kill cancer cells. Radiation therapy may not always succeed in eliminating cancer itself, but it can help alleviate pain suffered by those fighting cancer.

“This VERT system clarified things I would see at clinics and reviewed things,” said Daniela Fortich, one of Silverstein’s students. “When you first go to the clinic, you don’t see anything before. Now the new student gets to see everything before clinic and sees how to use a machine before they even step onto hospital grounds.”

Through a remote — also known as a “pendant” — students control the therapy on a computer screen in front of them.

But when it comes to Mursion, the virtual reality program, students are given a different form of training.

Mursion uses live avatars through a computer simulation to give students the interpersonal skills they’ll need as radiation therapists.

“We are able to prep that actor with questions that are typical of a new patient and concerns that patients typically have,” Silverstein said about the avatars. “So students get more of a feel for what it may be like to answer difficult questions, and sort of figure out how they want to handle that situation, because they’ll be faced with it.”

Mursion’s goal is to prepare students on how to deal with people from different demographics, socio-economic backgrounds and temperaments.

The school funded the $160,000 virtual program, which is managed by Shawna Bu Shell, director of the graduate program in instructional design and delivery, as well as Kayla Valentino, program director of radiation therapy technology.

The funds are enough to provide resources not just for the radiation therapy program, but also other social-heavy classes that deal with situations like marriage and family.

“When a student gets stuck, they can’t run out of the room,” Bu Shell said. “I had (the avatars) become couples that had issues. We were allowing students to have real conversations about what couples go through. If the conversation got too tough, we could give help and pause the simulation.

“The problem is human beings are not always mathematical.”

Before each simulation, professors work with Mursion to develop the kind of simulation they want. Avatars can be directed to be very difficult, have an accent or other issues which could disrupt a therapy session. The simulation can also give students the experience of working in a diverse and urban community.

“They can come across a patient who has just discovered they were pregnant,” Bu Shell said. “We schedule them for about an hour and we tell the company to start off easy. Then it gets harder and harder. Then we change up as the class goes on and those students have the opportunity to watch.”

There’s a lot the students learn from the simulation and each other, but the primary skill Silverstein believes a radiation therapist should have is compassion. Throughout Fortich’s time learning about radiation therapy, she has had opportunities to do real work outside of the simulation, which she admits can be an emotional task.

“You have to treat them like they’re your family members. And if you don’t, you won’t treat them right.”

CLARIFICATION: The simulator known as the virtual environment of a radiotherapy treatment room, or VERT, was fully funded by Manhattan College. A story that appeared in the Jan. 31 issue didn’t make the form of that funding clear.