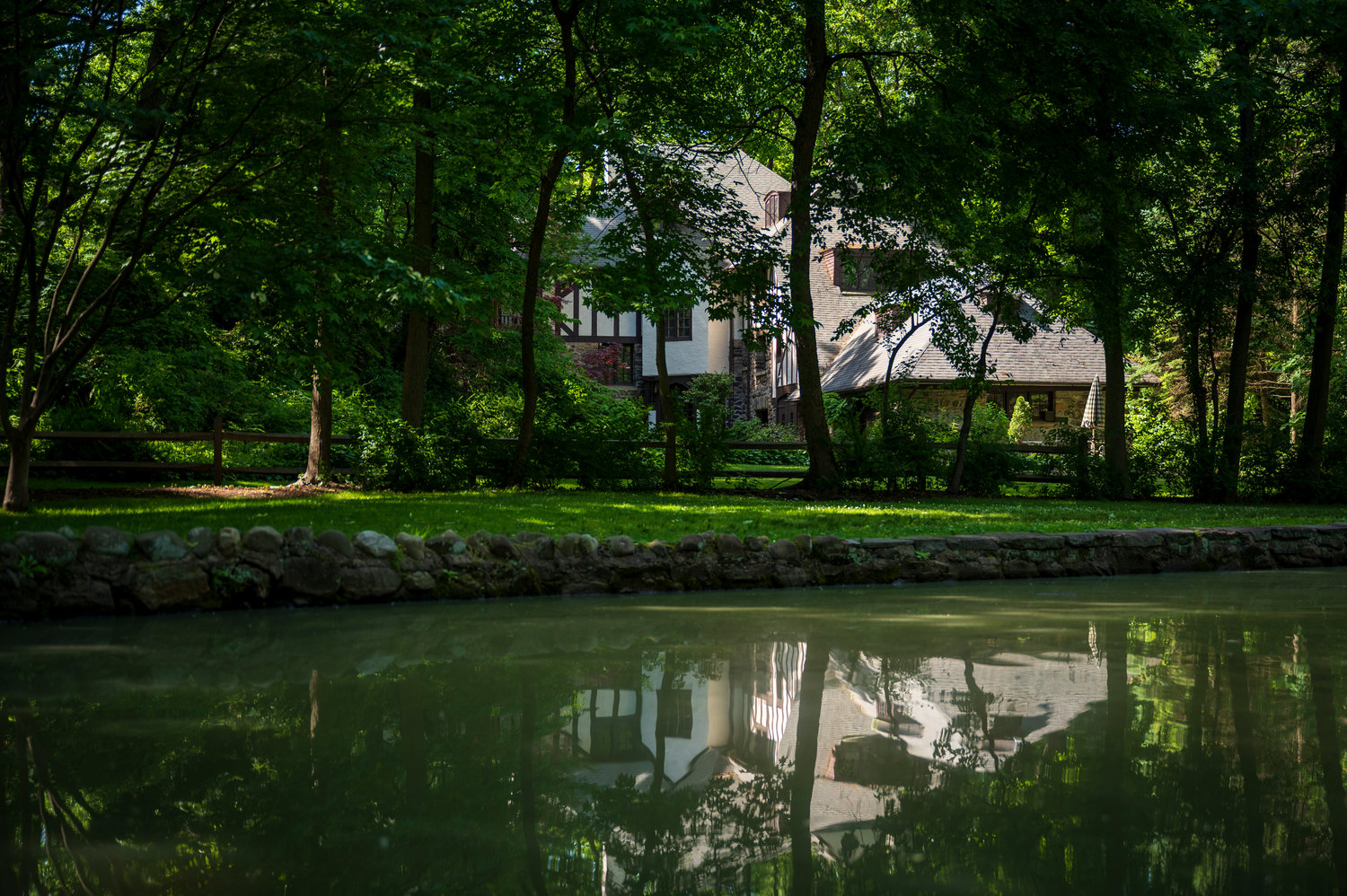 The mansion on Fieldston Road includes Indian pond, a place many people in Fieldston have grown to love. The property had the site of a development battle years ago.
Hiram Alejandro Durán
By Abigail Nehring

The 7,000-square-foot baronial home of the late Gerard Bloomfield in the Fieldston Historic District has sold for $4 million to an anonymous buyer through a limited liability corporation registered in New York.

The parties closed last month after a probate judge signed off on a settlement that had tied the property up in court for years following the death of one of Gerard’s three sons Marshall Bloomfield in 2018. The two surviving brothers, Matthew and Edward Bloomfield sold the property to an entity named Evan Sade LLC  May 18.

It’s Riverdale’s biggest single-family home sale this year and a sign of both a rebounding luxury market and the premium the rich are willing to pay to buy into a bucolic enclave in the Bronx just across the Henry Hudson Bridge.

The buyer was represented by Linda Donovan of Donovan LLP, according to property records. She did not respond to requests for comment this week.

Maple, oak, and blue spruce encircle the 1918 Tudor revival home designed by Mann & MacNeille. Its gabled roof and overhanging eaves peak through the foliage above a flash of white-washed cement stucco and fieldstone. The enormous 17-room, 2.5-story home rises into full view from the circular driveway.

Its east façade faces away from Fieldston Road toward a clearing in the thicket at the heart of the landmarked neighborhood where locals mingle along a bluestone walkway and gaze into the kidney-shaped pool known as Indian Pond to observe its aquatic life.

There are only 48 “A7” type mansions in the Bronx and 331 in all of New York City. The homes built in Fieldston on the estate of Joseph Delafield are part of a historic district designated in 2006. They rarely come to market but are capable of attracting dozens of brokers and architecture buffs hoping to get a close-up look at the largely intact early twentieth-century design. Such lavish stagings by Realtors are more typical among the Manhattan set.

According to transactions recorded in Property Shark, the median sale price per square foot of homes in Fieldston was up 28 percent year over year in the first quarter of 2022, surpassing annual gains before the pandemic.

Douglas Elliman’s Riverdale office issued a similarly rosy quarterly report, noting that rapidly rising real estate sales across Riverdale in the beginning of 2022 outpaced listing inventory gains. Riverdale’s luxury market, defined as the top 10 percent of all sales, began at $950,000 in the quarter and showed a median sales price jump of 18.5 percent year over year to $1.07 million, still falling short of pre-pandemic levels.

Part of Fieldston’s appeal to potential buyers is the offer of suburban escape without concomitant property taxes.

The neighborhood’s winding roads are privately owned and maintained by the Fieldston Property Owners Association, established in 1923 to preserve the character of the neighborhood and its approximately 257 homes and related structures.

They offer a cross section of picturesque revival styles in an eclectic mix — English Tudor, Mediterranean, Dutch, and Georgian Colonial homes on any one street.

The Bloomfield property is vacant and will require renovations, said Sanjya Tidke of Brown Harris Stevens, the listing agent. It has an oil heating system and no central air. The kitchen and bathroom need updating.

“Considering that, it’s a fairly high price,” Tidke said about the $4 million price.

For years the fate of 4680 Fieldston Road hung in the balance as city agencies and Bronx Community Board 8 wrangled over Marshall, Edward, and Matthew Bloomfield’s proposal to subdivide the lot and add new dwellings on the prized piece of real estate. The plan was met with fierce opposition from association members and the community board’s land use committee.

A revised proposal was as hotly contested as the first, and by 2017, the Bloomfields’ development appeared dead in the water.

Halstead listed the property in late 2017 for $5.9 million and it quickly attracted several buyers. But a sale was still a long way off. In August 2018, Marshall Bloomfield, who owned a third of the estate along with his two brothers, passed away after a long battle with cancer. The property went into probate and all bets were off with potential buyers.

“Life takes different turns and we had to wait for this to be done,” said Tidke, who held onto the Fieldston listing for years to come. Soon, the COVID-19 pandemic swept over New York City and brought probate proceedings to a standstill.

It presents a microcosm of the market upheavals that unfolded over five years as it plodded towards last month’s contract.

“With this in probate, we continued to show the property, but then came COVID and the courts were very slow,” she said. “In surrogate court, there was only one judge.”

The industry consolidated in 2020 and 2021, pandemic years that saw real estate transactions plummet and left New York brokerage firms struggling to tread water. As part of that trend, in 2020, Halstead and Brown Harris Stevens announced a merger, joining two powerful players in residential and luxury markets into a force of 2,500 agents.

Tidke’s four-member Halstead team maintained their listings under the BHS banner. Last November, they received an offer on 4680 Fieldston.

In order to close on the buyer’s timeline, they kicked the probate into high gear. In the following months, a judge approved the transfer of a third of the estate into an LLC, and the contracts went out. The historic home sold on May 18, according to city property records.

For now, the home remains secluded in the center of the forested lot, but Tidke notes there is ample room for a pool and tennis court, among other possible luxury additions.

Upon learning of the storied property’s recent change in hands, Community Board 8 land use committee chair Charles Moerdler, issued a practical warning: “Do you know the old expression three strikes and you’re out? Makes no difference who the applicant is. Anyone is free to try developing. Whether it will get them a different result, I don’t know.”