Removing the eyesores, however, could cost NYCHA nearly $22 million 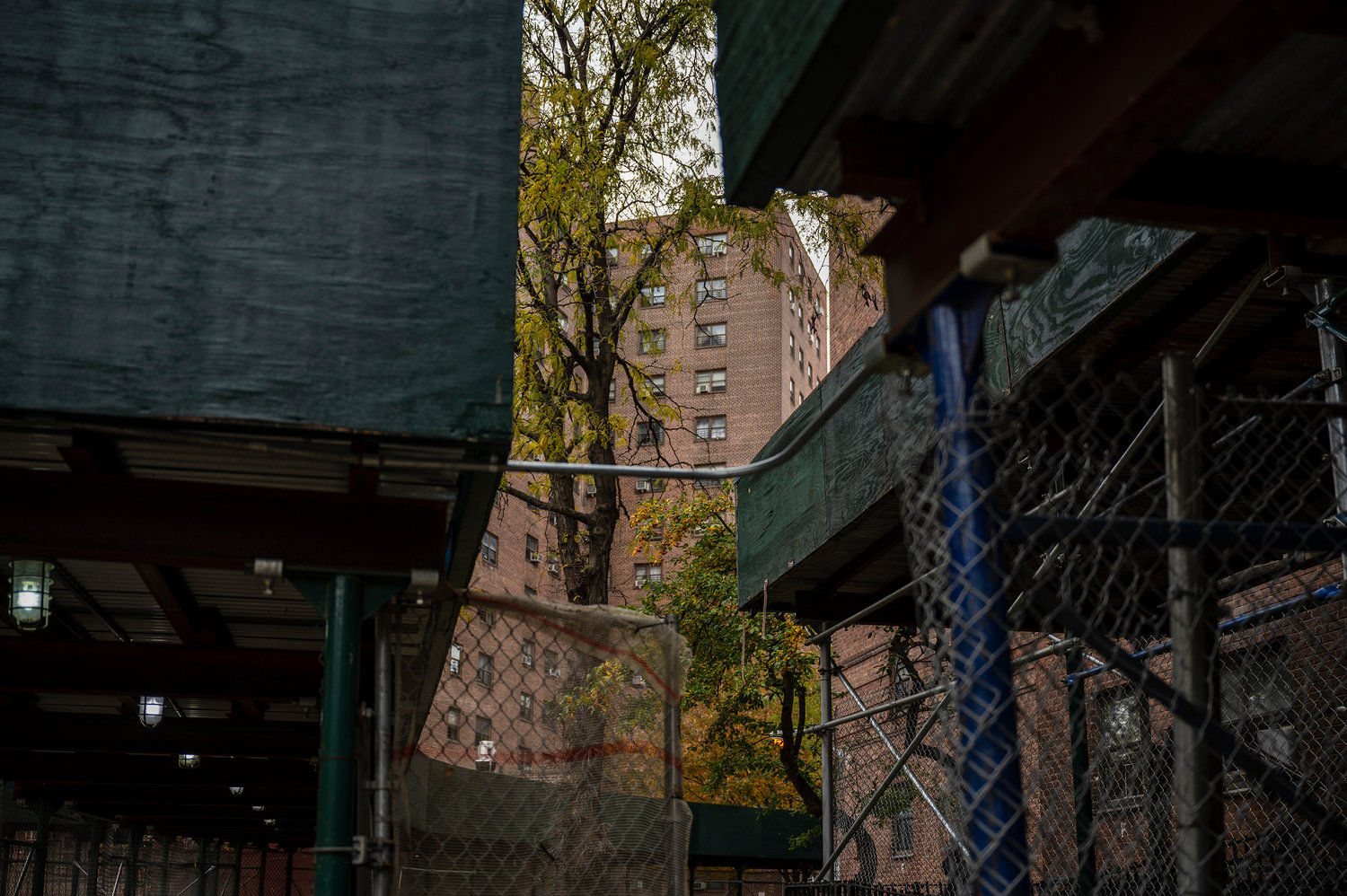 Sidewalk sheds line the perimeter of the buildings at Marble Hill Houses. Tenants say despite some benefits — like protecting pedestrians on the ground from debris falling from above — the structures are an eyesore and have overstayed their welcome.
HIRAM ALEJANDRO DURÁN Tony Edwards, Marble Hill Houses’ tenant association president, agrees with his neighbors that sidewalk sheds can be an eyesore, but adds they do serve a purpose — protecting anyone walking outside near the buildings from falling bricks. It gives contractors time to repair the decades-old and crumbling façade.
JULIUS CONSTANTINE MOTAL/ File
Previous Next
Support journalism

For anyone who has been through the expansive Marble Hill Houses property where two boroughs meet in recent years, one might have felt they were traversing one big construction zone.

Sidewalk sheds — which cover walkways near buildings where dangerous debris might fall — line the entire New York City Housing Authority complex. It’s been such a fixture, in fact, many who live there treat it as if it were any part of the landscape.

Others, like Brenda Sinche, say they‘re tired of looking at it, and can’t wait for it to just disappear.

“I think it looks ugly,” Sinche said. “I feel like we’re already under the subway system on Broadway, and that’s enough. But when you have these ugly structures all over the buildings — even in the yard — it starts to feel like it’s a little too much.”

Sinche isn’t alone when she expresses confusion as to why the temporary structures have been erected to begin with.

“I’m not sure I’d call it ‘temporary’ given how long they’ve been here,” she said. “But I also have not a clue why it was originally placed here.”

Despite her dismay, Sinche says she sees some benefits to having sidewalk sheds around. But not in a way NYCHA intended.

“I mean, they’re great if you forget an umbrella and you don’t want to get in the rain and get drenched,” Sinche said. “And in the summertime, when the sun is beating down on you, it can be a little beneficial to have around.”

“It just adds to the dark and grim stigma that people associate the projects with,” she added.

But Tony Edwards doesn’t agree. The president of the Marble Hill Houses tenant association, says he’s happy the sidewalk sheds are still part of the complex, finding their timing couldn’t have been better.

“A few months ago, we got hit real bad with (remnants) of Hurricane Ida,” Edwards said. “Even my apartment got it pretty bad.”

The storm ripped through the complex back in September, causing rainwater to seep in through some of the loose bricks that make up the façade of each and every building in the complex. It flooded a number of apartments as a result, not even sparing Edwards, who was forced to seek floor and wall repairs from his landlord.

“Management actually responded to this one a lot quicker than they normally respond to some other maintenance issues,” Edwards said. “I think the severity that Mother Nature caused that day really forced the city to respond faster than it normally does for things. I’m glad we had those (sheds) up because it would’ve probably hindered the response time for workers to get in there and make some of these repairs.”

According to city officials, the sidewalk sheds have a very specific purpose at Marble Hill Houses — they exist as part of what is known as Local Law 11 façade work. They stretch around nine of the complex’s 11 buildings, and have been up since 2018 “for continued pedestrian safety,” according to NYCHA spokeswoman Rochel Leah Goldblatt, and will remain in place “until repairs are made.”

The sheds initially covered all 11 buildings, but some repairs have already been made to a pair of buildings that were later deemed safe enough to remove the sheds.

Local Law 11 states buildings taller than six stories are required to have their façades inspected every five years by a licensed architect or engineer. That building expert would then file a conditions report with the city’s buildings department.

If unsafe conditions are discovered, sidewalk sheds and fencing are required within 24 hours of the filed report.

“The emergency shedding is required to stay in place until funding is allocated, the unsafe condition is repaired, and the repairs are signed off” by the architect or engineer, Goldblatt said.

Installing and removing sidewalk sheds can cost thousands of dollars per building. But fixing the façade — which the sheds are protecting people from — can cost even more. And it’s money that’s not easy for NYCHA complexes like Marble Hill Houses to obtain. Instead, Goldblatt said, city officials have to depend on “extremely limited” federal funding.

Mayor Bill de Blasio recently directed some city funds to remove sidewalk sheds from NYCHA facilities, Goldblatt said, beginning with some that have been installed the longest. “Marble Hill Houses was not included in that list.”

Some of the sheds at Marble Hill Houses appear to belong to different construction companies, leaving some to wonder how much NYCHA shells out just to keep them up. Goldbatt wouldn’t say, but some estimates put monthly rent at hundreds of dollars for each structure.

“I mean if you think about it, you start to consider what important repairs we might have had to hold out on for because some (of) the required money was being used to keep these” sidewalk sheds up, Edwards said.

And despite his own personal feelings about the sidewalk sheds, Edwards remains sympathetic to his neighbors who just want them gone.

“I get the concerns people have about these things,” Edwards said. “They’re an eyesore, and no one wants to see these things laying around. It makes the area look a little darker (than) what it is.”