Mark Stagg spends Thanskgiving handing out turkeys to the needy 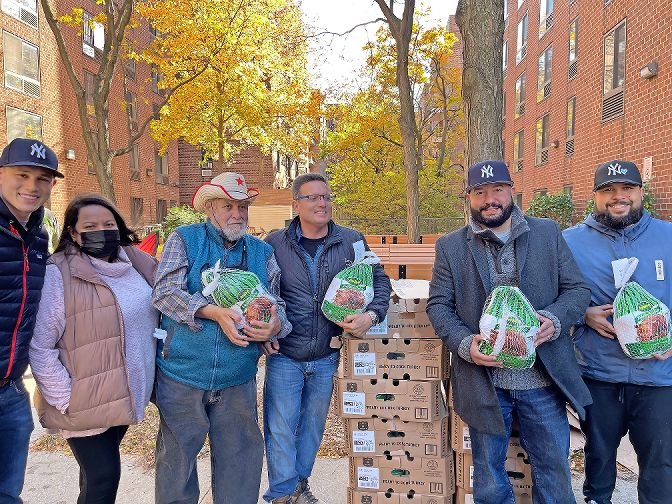 Thanksgiving became a turkey day after all for 3,000 Bronx families thanks to real estate developer Mark Stagg's tradition of delivering thousands of turkeys to those in need.
Courtesy of Stagg Group
By MICHAEL HINMAN

Thanksgiving is a holiday known for its seemingly never-ending cornucopia of food. But for many families, the holiday is like any other day — very little to eat, if anything at all.

But 3,000 Bronx families had a chance to enjoy a traditional holiday turkey thanks to an annual tradition real estate developer Mark Stagg continues to help those in need.

State Sen. Alessandra Biaggi and incoming councilwoman Marjorie Velasquez joined Biaggi at the Huntington Free Library Nov. 20 to host a panel on hunger at a food and health empowerment fair there.

Stagg has built a number of residential buildings throughout the Bronx, including a number of projects along Broadway in Kingsbridge and North Riverdale like two new projects going up at 6375 Broadway, and what was formerly 5278 Post Road.

The developer has also taken some hits back in 2017 when an apartment building he developed at 5731 Broadway was turned into a transitional facility for homeless families.

“Every year we look forward to this,” Stagg said, in a release. “And this year — especially while we are in a pandemic — we are grateful for the partnership that was required to make these events a success, and we are happy to support families in our community preparing for the Thanksgiving holiday.”

Why donate coins to Toys for Tots when you can give Dogecoin?

Just when you thought cryptocurrency has found its way into everything it could, it finds yet another organization to infiltrate: Toys for Tots.

Accepting such donations can have benefits for Toys for Tots, according to the organization, since the IRS classifies cryptocurrency as property.

That means it’s not subject to capital gains taxes, and are tax-deductible for the donor.

Anyone looking to donate using this method can visit ToysForTots.org/donatecrypto.