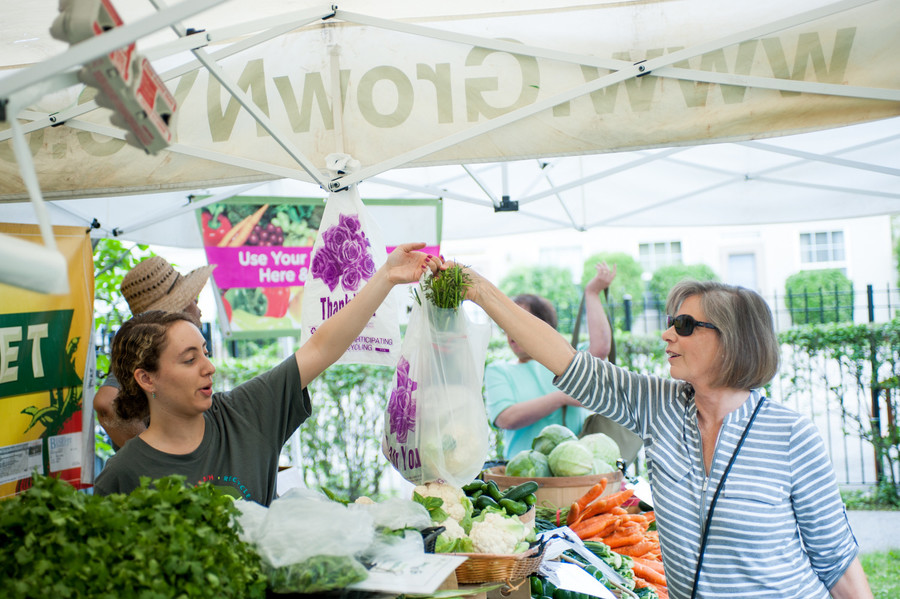 Fiona Hernandez hands a customer her bag of vegetables at the Youthmarket at Riverdale Neighborhood House.
Julius Constantine Motal
By Lisa Herndon

Every Thursday from now until the end of October, the front lawn of Riverdale Neighborhood House transforms into a Youthmarket, selling locally grown foods such as cauliflower, kale and peaches to the community.

For the high school students who work at the market, the weekly event has given them a chance to improve their eating habits, learn more about their community, and build friendships with their peers.

David Reyna, who describes himself as reserved, said working with the market and interacting with the public has allowed him to come out of his shell, so to speak. For him, interning at the market was a way to give back to an organization where he spent previous summers and had great memories.

With easy access to fresh fruit and vegetables, it also has helped Reyna improve his eating habits.

“Some people might think it’s a little too expensive,” he said. “It’s worth it because you are getting value and you are giving your body more than McDonald’s or some other manufactured food.”

Fiona Hernandez says the camaraderie with her peers makes it one of the best parts of working at the Youthmarket.

The teens are very hands-on, including how the fruit and vegetables are displayed in order to make it more appealing to customers.

If food goes unsold, instead of going to waste, some of the interns take it home, which has been good for Hernandez, who said before joining Youthmarket, she was “a little unhealthy” and sometimes ate foods like potato chips and ice cream on a daily basis. The easy access to better foods has nearly eliminated some of her habits.

In addition to selling, weighing and bagging the fruits and vegetables, teens learn how to prepare the assortment of healthy meals and snacks. Interns like Jaylene Muñoz do the cooking at demonstrations, which could include stir-frying items like scallions, corn and zucchini, or slicing apricots and cilantro to prepare a fruit salad.

Earlier, Muñoz shucked corn with the ease of a pro as she worked with a customer who purchased a few ears.

Working on cooking demonstrations made Reyna a better cook, he said — and he’s sharpened his skills with slicing and dicing fruits and vegetables.

The fresh produce also is a hit with shoppers.

“Very fresh stuff, and I’m not afraid to give it to my (children) when we come,” said Natalia Topchiy, who usually purchases peaches and blueberries.

In addition to the market teaching the interns skills like working with the public and teamwork, “it provided this opportunity for our young people to be a part of something positive and educational,” Nancy Nuñez, Neighborhood House’s deputy director of youth service, said.

The profits Neighborhood House makes from the market goes back into the project. The nonprofit also pays its interns and fundraises to cover the cost.

The teenagers are part of a yearlong internship, and working in the Youthmarket is the summer component.

“People think that you go to the store and buy an apple,” Nuñez said. “You don’t think of beyond where did this apple come from? And who grew it? How did it come to be and the different ways you can eat an apple and prepare an apple? It’s learning more and more about there are local farmers and how you can support the local farmer, and there’s life beyond the supermarket.

The Youthmarket at Neighborhood House, done in partnership with GrowNYC, was the first one in Riverdale, Nuñez said. GrowNYC was founded in 1970 as the Council on the Environment of New York City, according to its website. What started as a policy-based organization has since transformed into a service group, operating green markets across the city.