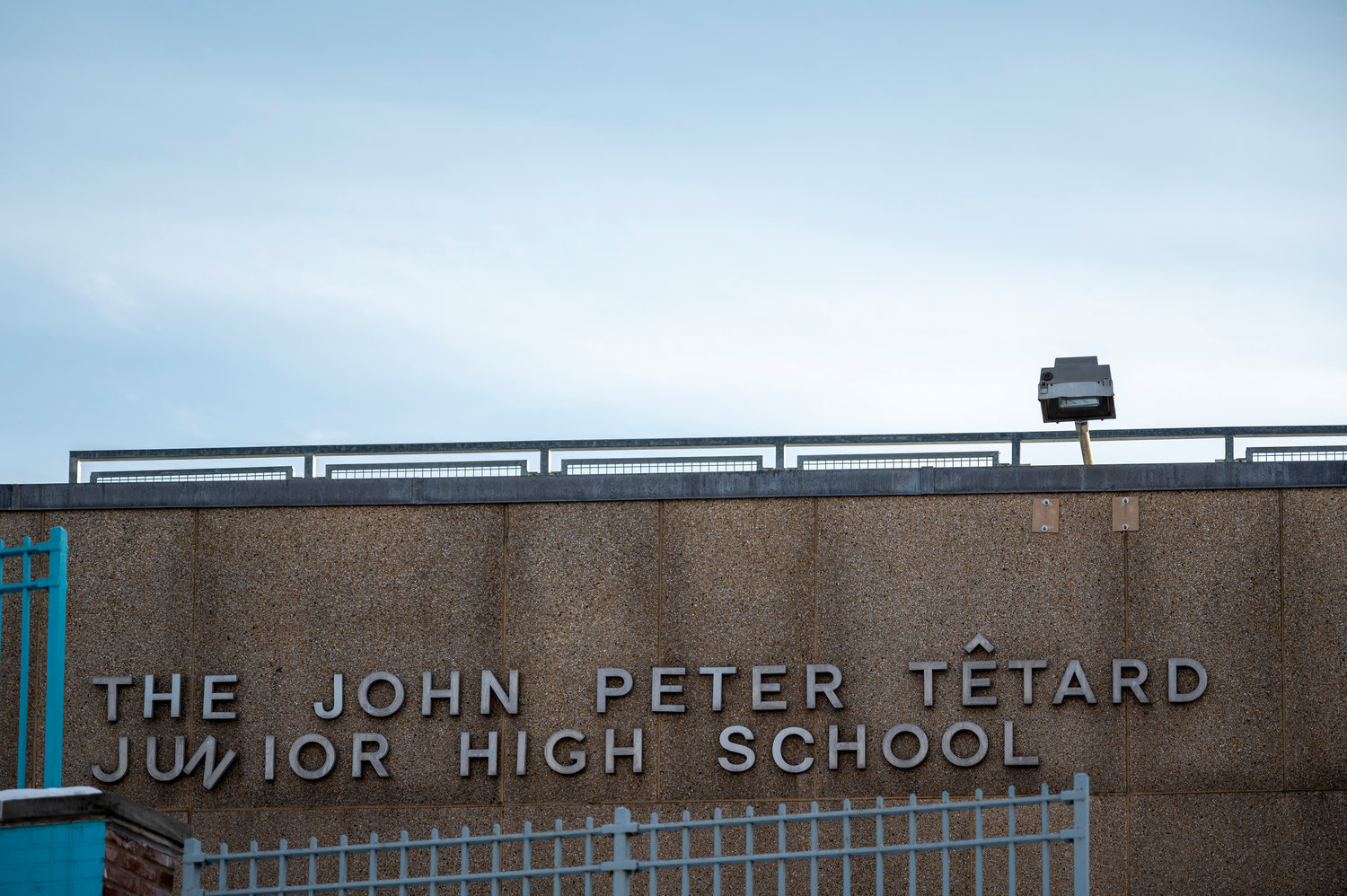 The halls have been dark for nearly three months, but the city’s public middle schools are now set to reopen at the end of February. As a result, many middle school employees will be prioritized for coronavirus vaccinations — and thousands of appointments will be available to them during the winter recess, Mayor Bill de Blasio says.
HIRAM ALEJANDRO DURAN 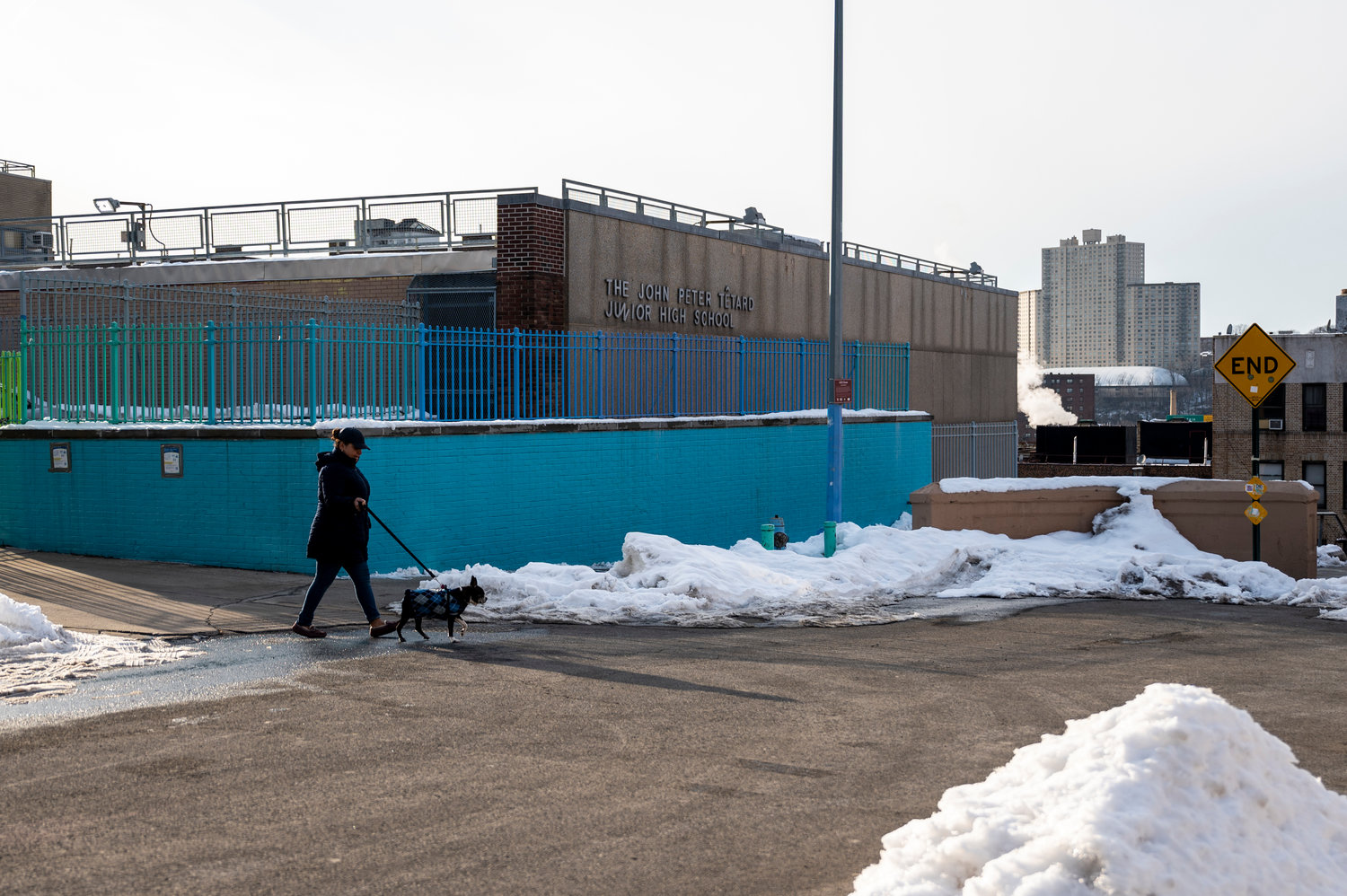 While middle schools throughout the city will reopen at the end of the month, it might look a bit different in this part of the Bronx. M.S. 244 is one of the only schools here strictly teaching sixth through eighth grade. Regardless, they’ll physically return to school Feb. 25.
HIRAM ALEJANDRO DURAN
Previous Next
By ROSE BRENNAN

Getting back to school hasn’t been easy for many, but it’s been especially difficult for New York City.

Public school buildings were not open two months last November when officials shut them down again in the midst of a new coronavirus surge.

Elementary schools, preschools and specialized District 75 schools were among the first to reopen physically in December. But there was no reopening date in sight for middle and high schools.

That all changed last week.

Mayor Bill de Blasio declared middle schools would reopen Feb. 25, following a winter recess. Still closed for the time being, however, are high schools, although de Blasio says he hopes they will follow at some point this spring.

de Blasio has maintained public school buildings are among the safest places for children to be during the pandemic since positive test rates weren’t common inside them. That was his position last fall, and it continues to be the mayor’s argument even now as he reopens middle schools.

“We know kids are ready to come back,” de Blasio said. “Teachers and staff are excited to see the kids again. This is going to be great for New York City. And a lot of work has gone into this to make sure we are ready, and of course, to always put health and safety first.”

Because middle school employees now need to physically report to campus, they’ll be moved up the priority list to receive coronavirus vaccines, de Blasio said. The goal is to get as many vaccinated as possible, especially during the winter recess when they don’t have classes to worry about — in-person or otherwise.

“We’ll have thousands of appointments available for teachers and school staff,” de Blasio said. “But I also want to remind everyone our schools are among the safest places in the entire city. We’re testing every school every week. Whether someone is vaccinated or not, they’re going to be safe in our schools.”

So what does reopening mean for this part of the Bronx? Middle grades will return to their school buildings, but this particular area is unique because there is really only one public school that strictly teaches sixth through eighth grade: M.S. 244 on West 231st Street.

But even M.S. 244 — better known as The New School for Leadership and the Arts — is housed inside Marie Curie High School, making it a bit of an anomaly when it comes to school reopening. That means M.S. 244’s students will return without their high school peers with whom they share the building.

The rest of the area’s middle-schoolers largely attend campuses with mixed grade levels. Schools like P.S. 95 Sheila Mencher and P.S./M.S. 37 are schools that include elementary grades.

Younger students have been coming into those buildings for the past two months, and will now once again share that campus with middle schoolers.

This could create some confusion for anyone working on those campuses. While teachers over sixth, seventh and eighth grade would return, who else will need to physically show up among office staff members, administrators, counselors and anyone else not teacher?

Principals can call in 20 percent of their non-academic school personnel, but will still honor work-from-home medical accommodations for those who need them, according to Alison Gendar, spokeswoman for the United Federation of Teachers union. That also applies to psychologists, social workers and other support staff members, provided their caseloads are spread out across grades.

However, if their caseloads are isolated to one grade level, they’d follow the same in-person or remote model as that grade level. That means seventh-grade school counselors would need to report to the building every day, but 10th grade counselors could continue to work remotely.

There could be an unforeseen advantage to reopening the buildings for schools like IN-Tech and RKA: Space. And lots of it.

“We can use the high school side for social distancing, as well as the classrooms (to) support the students, so more could come in,” said Michael Simmon, an eighth-grade social studies teacher at IN-Tech. “Instead of keeping them on one side of the school, they can now use both sides. And they could accommodate more students.”

Simmon has taught remotely since November, and says he’s excited to get back into the classroom. But that excitement isn’t necessarily just for himself — it’s for the students. While middle and high schoolers might be better suited for remote learning than those at the elementary levels, some of them still need a bit of extra learning support that they can’t necessarily get at home.

“You may not get that support that you need with somebody that’s very knowledgeable,” Simmon said. “Not saying the parents aren’t knowledgeable, but somebody in the content area can really support your algebra, your social studies, English (and) science labs, and get that extra support so the kids feel more encouraged to do their work.”

Some students still struggle more than others academically. And opening school buildings might be what everyone wants for their kids ideally — but for students who need that support, reopening is crucial.

“All the students lost a little bit (with) pandemic fatigue,” Simmon said. If school buildings reopen, “they’ll start to re-engage again, because they’re now back in the flow of the whole school. And I believe that will help them refocus back into grades, and getting their grades back up.”