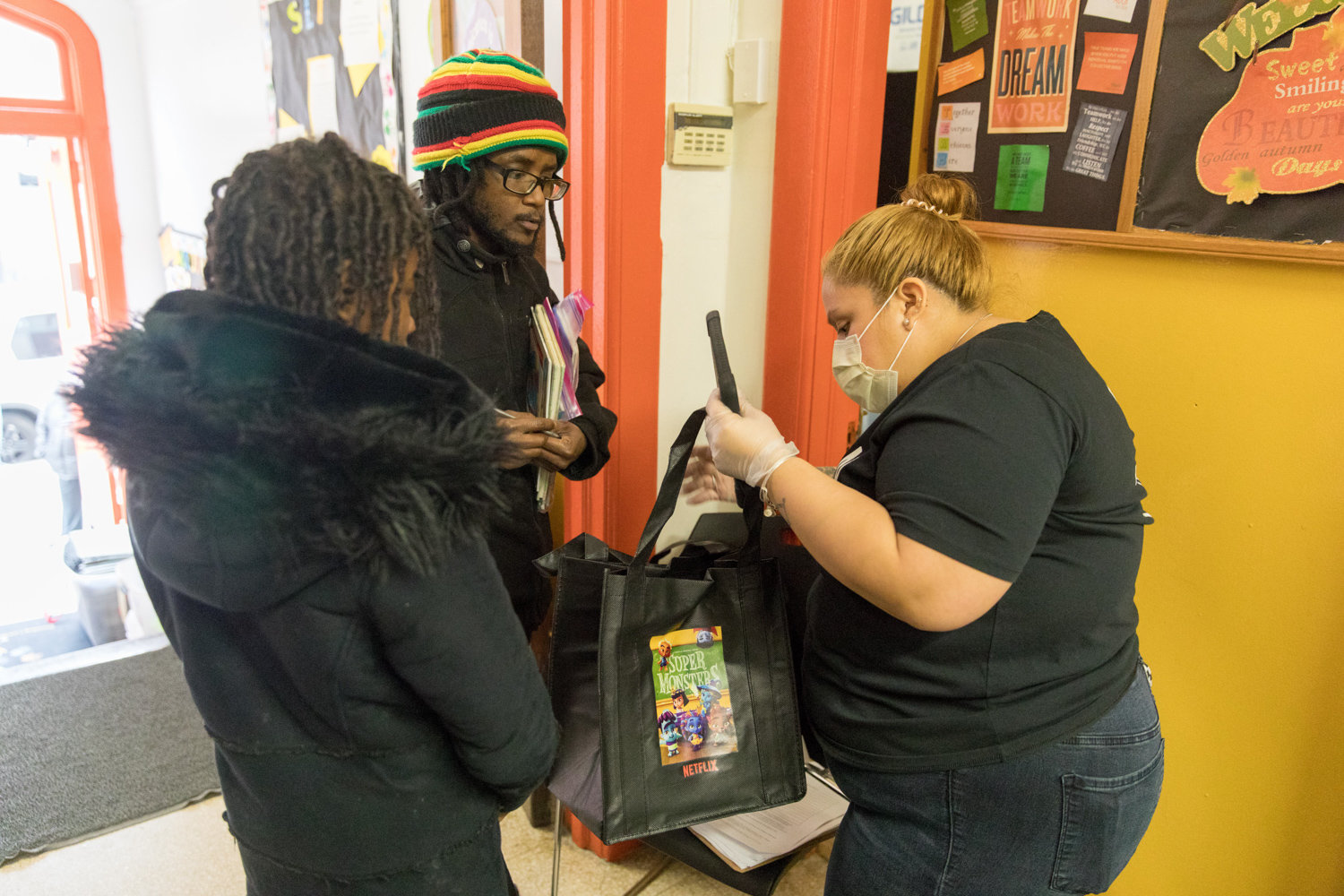 P.S. 207 aide Amy Jimenez hands bags of learning materials to Frederick Hay, the parent of three children enrolled at the Godwin Terrace school, soon after Gov. Andrew Cuomo shut down public schools in the state last month. Whether schools reopen this academic year is up for debate as Mayor Bill de Blasio has said definitively no, while Cuomo is still waiting to see what happens in the coming weeks.
JULIUS CONSTANTINE MOTAL / File
Support Local Journalism

In what seems like Round 2 of the power struggle between Mayor Bill de Blasio and Gov. Andrew Cuomo, the jury remains out on whether public schools in New York will close for the rest of the academic year.

de Blasio announced over the holiday weekend that after talking to schools chancellor Richard Carranza and other experts, he made the decision to close schools through June, looking to reopen them again next fall for the 2020-21 academic year. Even after hearing Cuomo proclaim soon after that no decision had been made on the fate of schools this year, de Blasio doubled down during his Sunday daily coronavirus briefing.

"The painful realty is that schools will not be able to reopen again for this school year," de Blasio said on Sunday. "As we explained previously, this was the right thing to do in terms of health care and safety."

The struggle between the two elected leaders seem to be a pick-up from just a month ago when de Blasio pushed for Cuomo to close the schools, and the governor hesitating for more than a week before shutting them down.

de Blasio says his administration is responsible for 1.1 million students in the city. Cuomo, however, told reporters a short time later on Sunday that he's responsible for the whole state, and that such a decision had to be made on a much more macro level — even beyond New York. Like New Jersey and Connecticut, whose economies are closely intertwined with New York — especially New York City.

While it might be erring on the side of caution to simply close schools through the end of the academic year, Cuomo warned that overabundance of caution could be detrimental to the state as well.

"All the schools are closed," Cuomo said. "They will remain closed. We are not going to open any school until it is safe from a public health point of view. We will not open them one minute sooner, and we will not open schools one minute later than they should be open either."

de Blasio touted the success New York City schools have had in creating distance learning for its students banned from campuses. It's a system that seems to be working, especially with the help of corporate partners that have provided technological help like tablet computers and internet connectivity.

That might all be well and good, Cuomo said, but there is still more to consider when it comes to whether schools should reopen this academic year.

June, the governor added, "is a long way from now," and that while he can't predict yet what might happen by then, he will formulate regional plans with his counterparts in New Jersey and Connecticut to create a path "driven by data and science."

Even more, if local governments start deciding to take their own paths, Cuomo said, it could disrupt any economic restart when the region is ready for it following the coronavirus pandemic.

It's not necessarily clear who might have final say on the fate of New York City schools. While decisions are generally left at the local level, Cuomo was given broad powers to make decisions for the entire state in light of the pandemic. Public schools, for example, didn't close in New York City — or the rest of the state, for that matter — until Cuomo ordered them closed. It's expected he would then be able to re-open them, although the possibility remains that de Blasio and Carranza could retake control of the schools.

de Blasio downplayed any animosity between him and Cuomo over the fate of schools.

"I respect the governor, and I think the governor has done a very good job in this crisis," de Blasio said. "We have talked a lot during this crisis, and our teams talk literally many, many times per days. There has been a lot of agreement on the direction that we have had to take."

Cuomo seemed to agree, but still pushed that some decisions in light of the pandemic must be made at a higher level.