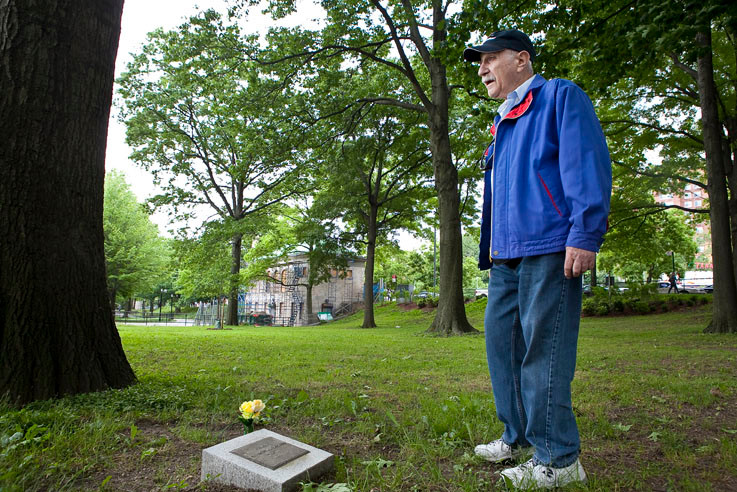 When construction workers started work on Memorial Grove in April, there was no ceremonial groundbreaking, no city officials or politicians wearing hardhats.

And when the grove finally opened days before Memorial Day, after countless setbacks and delays, there was no ribbon cutting or marching band. There was no ceremony on the perfect day for commemorating fallen soldiers inside the Grove made possible by veterans.

There were 39 plaques in front of 39 trees and two happy veterans from Kingsbridge.

Herb Barret and Don Tannen’s mission, which began in 2006, was to reconstruct the long-neglected memorial in Van Cortlandt Park near West 242nd Street that was originally built to acknowledge soldiers who died during World War I, World War II and the Korean War.

Mr. Barret got local politicians and Community Board 8 to support the idea. In 2007, Assemblyman Jeffrey Dinowitz was able to convince the Department of Parks and Recreation to clean up the area and install a wire fence around the Grove. Then, in 2009, Councilman Oliver Koppell allocated $250,000 and the Parks Department began planning a restoration.

Still, the site remained untouched for more than a year while Parks tried to choose a contractor. In early 2011, it looked like work was finally going to begin, but the hired contractor subverted its requirements for hiring a woman- or minority-owned subcontractor. The project was delayed again when the contractor’s plaques were not approved by the Parks Department because they displayed the wrong font and because workers had installed the wrong fencing.

Six years later, after dozens of visits to the community board to bemoan the city’s tangled bureaucracy, Mr. Barret’s grove is finally complete.

“It feels good,” he said on June 1 from the Grove.

Before Memorial Day, Mr. Barret walked around and placed a plastic flower next to each stone.