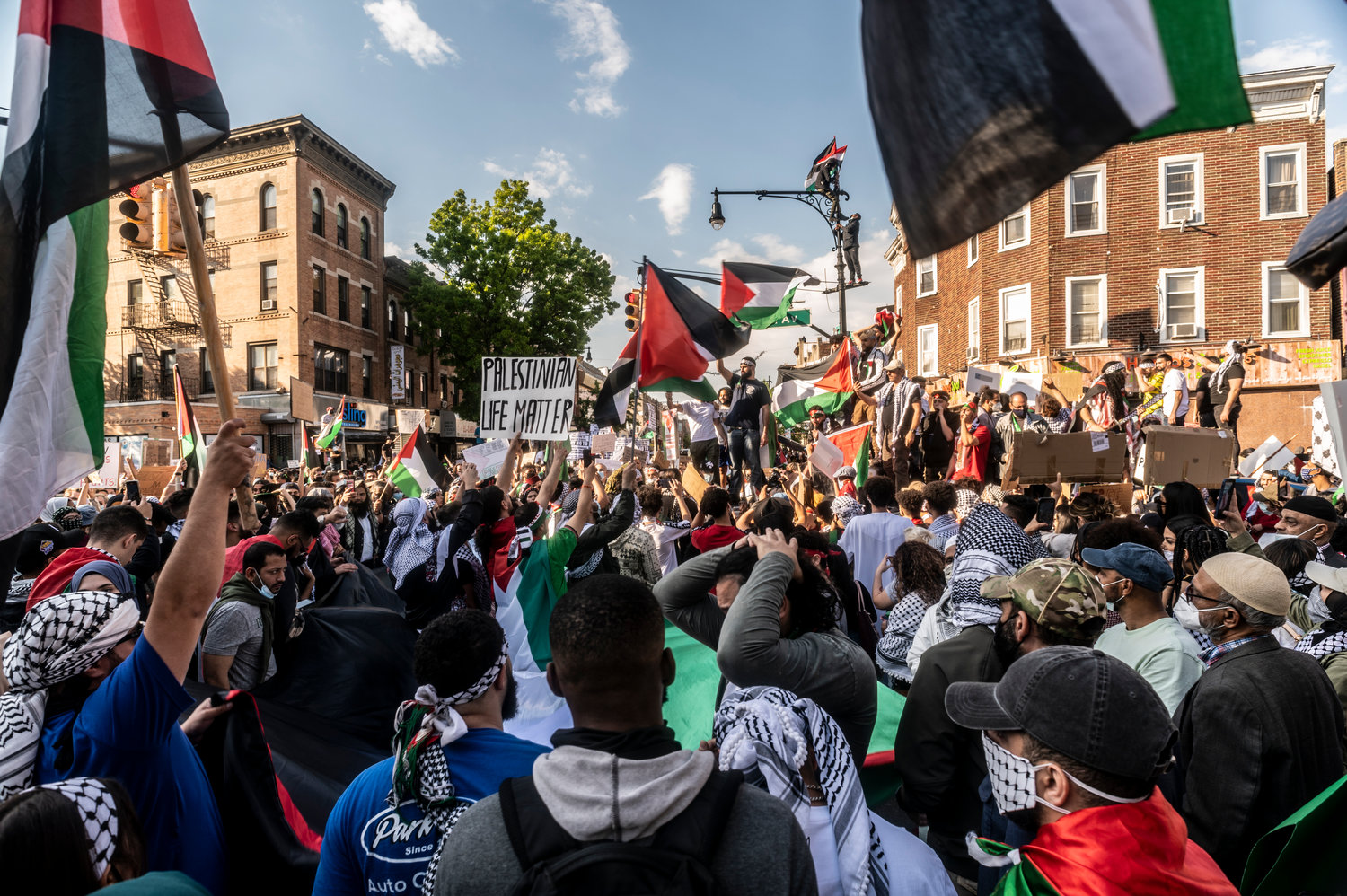 Pro-Palestinian demonstrators marched in Brooklyn’s Bay Ridge last Saturday over Israeli airstrikes in Gaza that have reportedly killed more than 212 people there. The latest conflict between Israel and Palestinians is said to have broken out after an Israeli police raid on the al-Aqsa Mosque last week.
HIRAM ALEJANDRO DURÃN 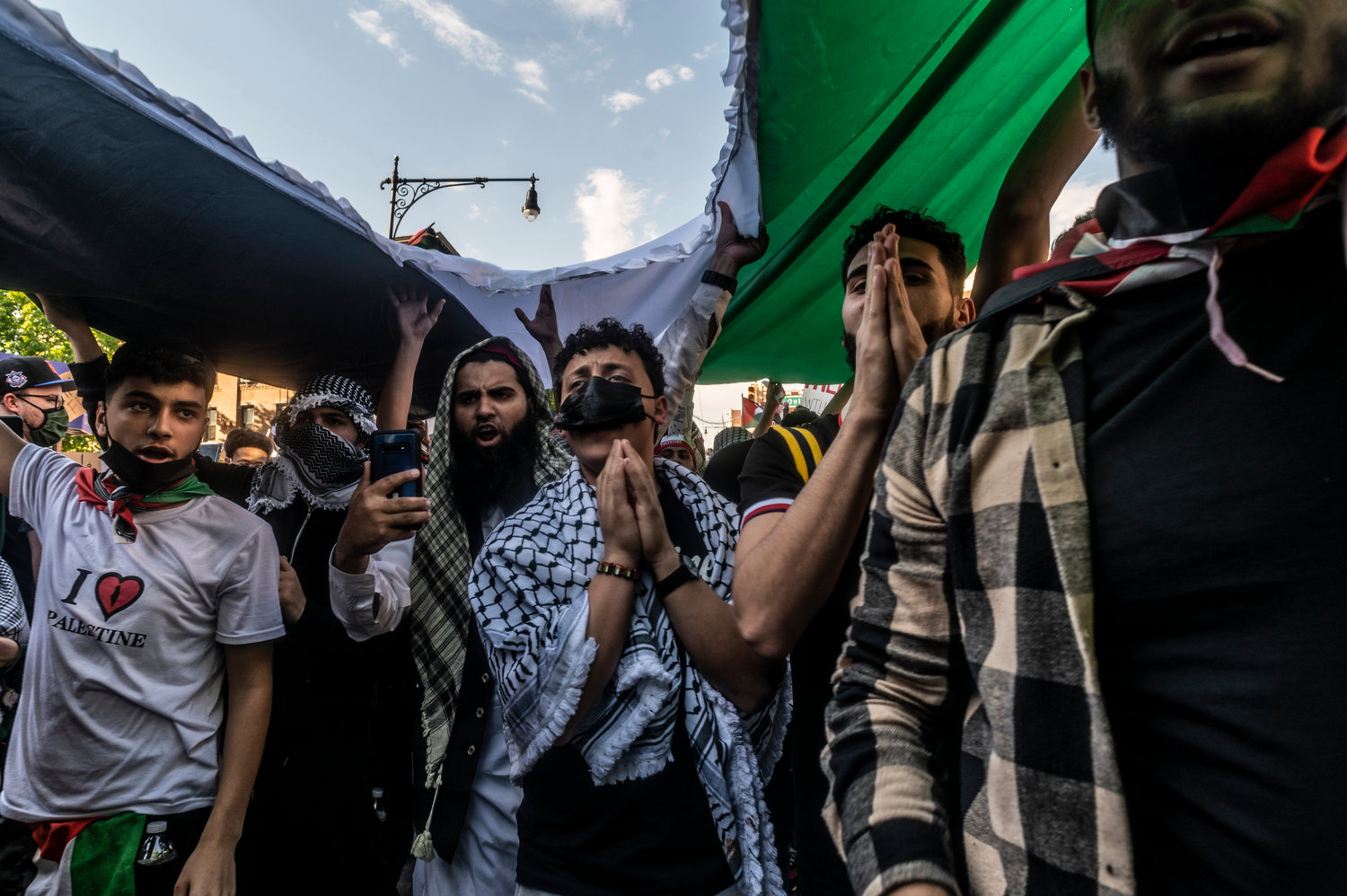 Thousands of pro-Palestinian demonstrators marched in Brooklyn’s Bay Ridge neighborhood last weekend, gathering to protest Israeli airstrikes in Gaza over the last several days. Hamas, the political group that controls Gaza, has sent its own volleys of rockets toward Israel — nearly all destroyed by the country’s missile defense — in the latest escalation of a decades-old conflict.
HIRAM ALEJANDRO DURÃN 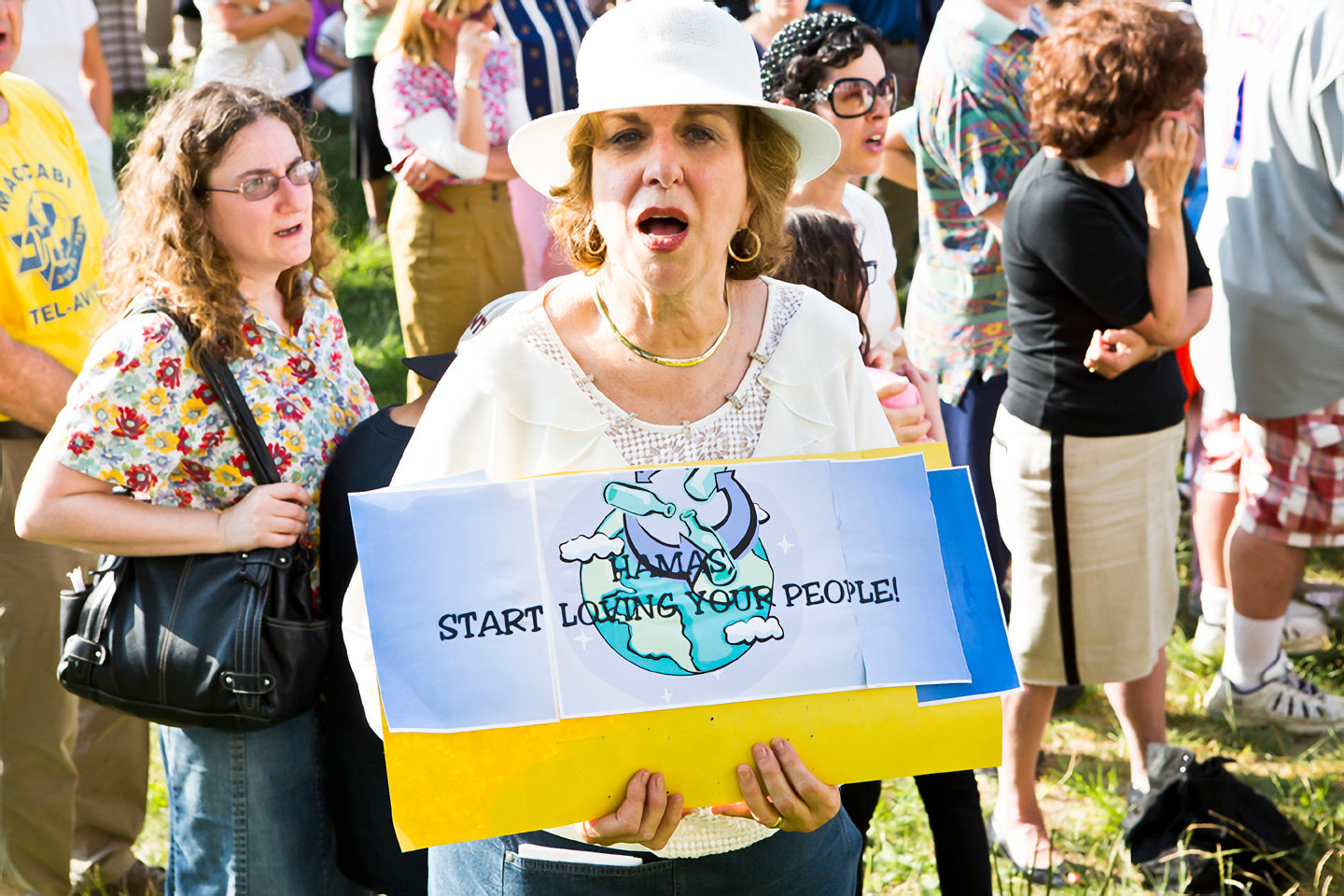 Charles Moerdler believes the Palestinian political group Hamas — which controls the Gaza Strip — is solely responsible for the current conflict with Israel. For the last week or so, Hamas has exchanged fire with Israel, with nearly all of its rockets destroyed by the country’s missile defense shield.
MASAO KATAGAMI/ File 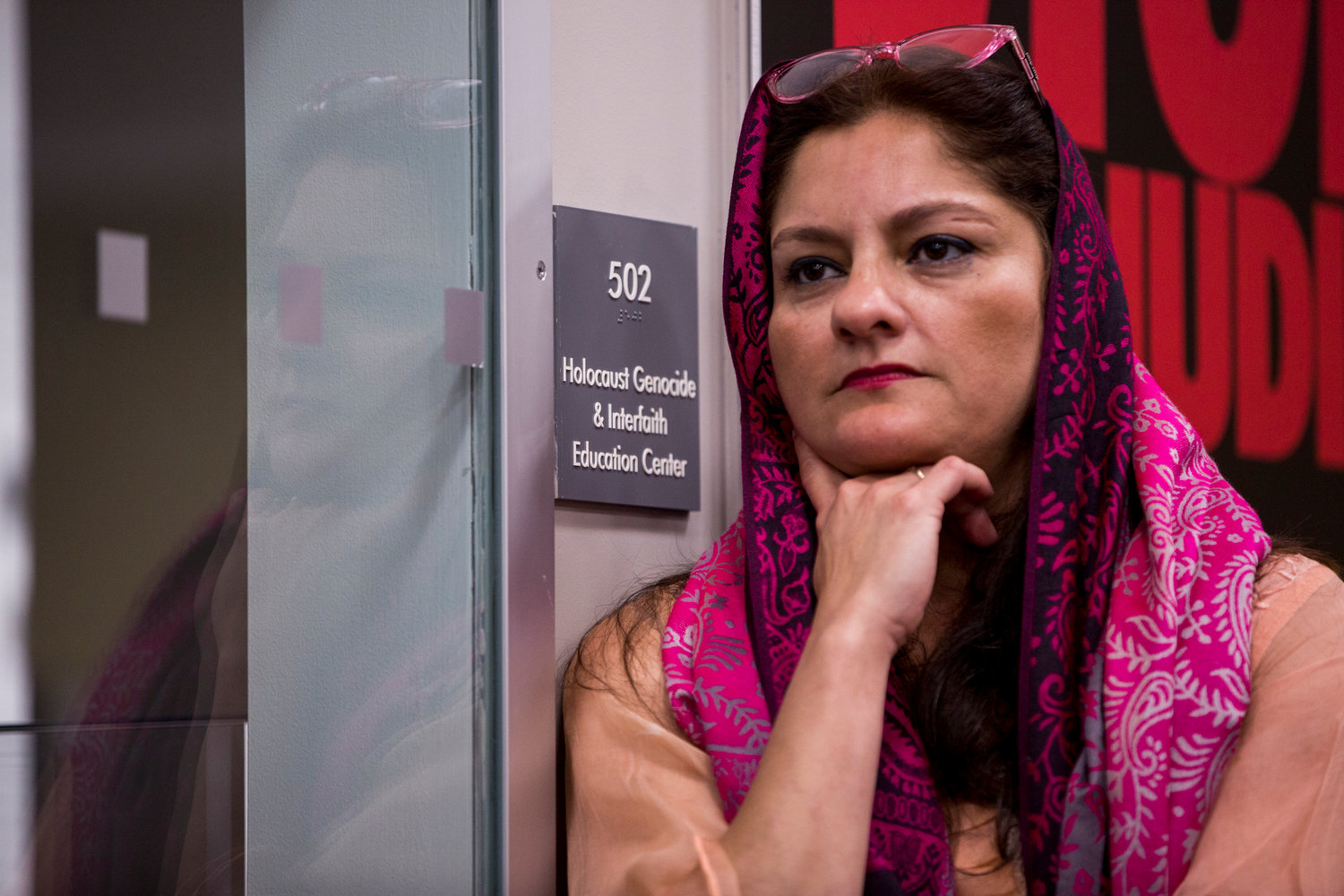 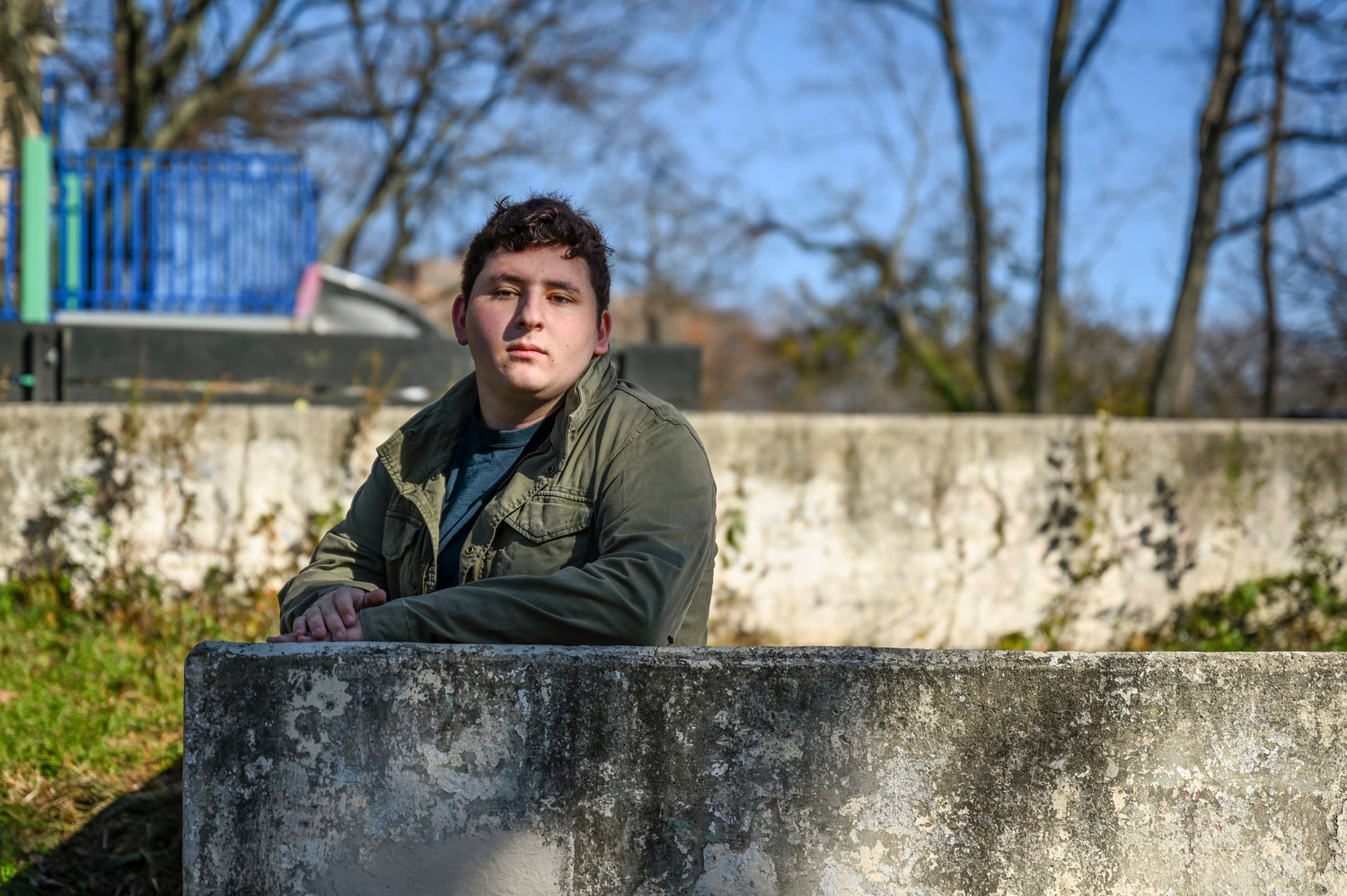 Raphy Jacobson — a senior at the High School of American Studies — says he grew up in a pro-Israel family but has since moved away from Zionism. Jacobson believes Israel is wrong to attack Palestinians, and that its missile strikes don’t live up to the values of Judaism.
HIRAM ALEJANDRO DURÃN/ File 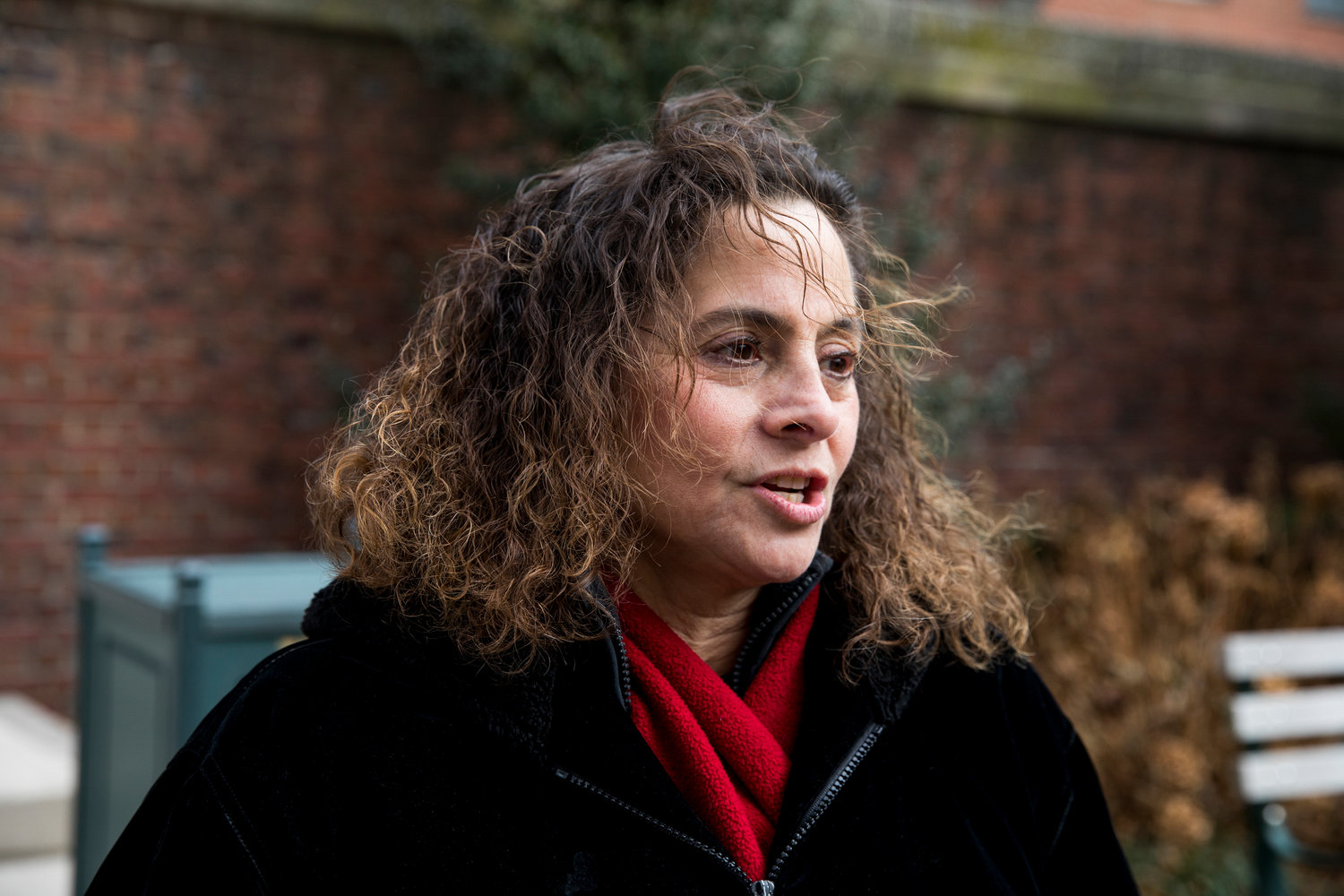 Manhattan College political science professor Pam Chasek says she’s saddened but not surprised by the recent outbreak in violence between Israel and Palestinians. This conflict won’t be solved, she says, until both sides sit down and hammer out a long-lasting agreement.
JULIUS CONSTANTINE MOTAL/ File
Previous Next

As a young boy, Charles Moerdler remembers the bombs Nazis dropped night after night on London during their World War II blitzkrieg. Now, well into his 80s, he never thought he’d have to experience such terror again.

But as violence breaks out again between Israel and its Palestinian neighbors, Moerdler is there, on the ground, with a front-row seat to history he never asked for.

Yet in emails sent to a number of his friends, family members and acquaintances back in the Bronx, it’s clear which side the longtime community leader is on.

“This is the second time in my lifetime that I have been among the targets of deadly rockets,” Moerdler said. “Nazis then, Hamas terrorists now. Their goals, objectives and targets were/are the same: Kill civilians and create intimidating terror.”

However, many may not draw the same extreme conclusions as Moerdler, seeing the growing conflict in the Middle East as something far more complicated. Both Israel and Hamas have exchanged airstrikes and rocket attacks, respectively, over the past week. Adding to the unrest, Jewish and Arab mobs have violently clashed in various cities throughout Israel.

It’s all what Pam Chasek describes as “distressing. Not unexpected, but distressing.”

“It’s a powder-keg,” the chair of Manhattan College’s political science department said. “This happens all of the time. This (time it) escalated very quickly, but the problem is that it’s never going to be gone.”

Chasek’s research in that region is focused on environmental issues, but she holds a master’s degree in Middle Eastern studies and has closely followed tensions between Israel and Palestinians for decades.

The current conflict, she said, first started in the Sheikh Jarrah neighborhood of East Jerusalem where several Arab families faced eviction by Israel’s supreme court. Israel has occupied East Jerusalem — which Palestinians view as the capital of their future state — since 1967, a move not recognized by the greater international community. Since then, Jewish families have tried to displace Palestinians in this part of the ancient city.

Palestinians have protested these impending evictions for the past month, creating a number of clashes with police that culminated in a violent law enforcement raid on the al-Aqsa Mosque compound on May 10. The mosque is the third holiest site in Islam — sharing the Temple Mount, the holiest site in Judaism.

Police fired tear gas and rubber-tipped bullets, according to reports, while Palestinian protesters threw rocks back at them. In the end, hundreds of Palestinians and several Israeli police officers were injured.

All of this took place at the end of the Muslim holy month of Ramadan, which coincided with Jerusalem Day — an Israeli holiday celebrating the city’s reunification after the 1967 war.

Not long after the police raid, Hamas started firing rockets toward West Jerusalem and Israeli population centers near the Gaza border. Israel responded in kind with airstrikes.

Since then, more than 200 Palestinian have been killed, according to reports, nearly a third of them children. At least 10 were reportedly killed by rocket fire on the Israeli side.

Taking sides in the conflict isn’t limited to just those in the Middle East. Closer to home — and across the country — supporters of Israel believe the country must do whatever is necessary to defend itself, while others see Israel as a colonial power running an apartheid state relegating Palestinians to second-class citizens.

All of this is such a polarizing issue because its rooted in identity, religion and colonization, among other things, said Mehnaz Afridi, director of the Manhattan College Holocaust, Genocide & Interfaith Education Center.

Afridi, who is Muslim, believes very strongly in fostering connections across faiths. She even raised $8,000 for four local synagogues vandalized last month by someone hurling rocks through their windows.

Moerdler, however, doesn’t agree. The longtime Community Board 8 land use chair makes regular trips to Israel, but this time picked the wrong time to visit. Still, in his emails to friends and colleagues back home, Moerdler doesn’t hesitate to assign blame.

“While Hamas and its allies let loose showers of unguided rockets aimed generally — if aimed at all — at civilian targets,” Moerdler writes, “Israel’s initial barrage was focused on specifically targeted individual leaders of the terrorist onslaught and facilities used by them to work their mischief.”

Even if that is indeed true, scores of Palestinians already have been killed or wounded by airstrikes and shelling.

Moerdler’s not alone in his belief. Hebrew Institute of Riverdale Rabbi Avi Weiss is outspoken about his unwavering support of Israel. He has even consistently criticized U.S. Rep. Jamaal Bowman for his support of a bill intended to restrict aid to Israel — even going as far as to circulate a petition pleading with Bowman to reverse his position.

Bowman, however, told The Riverdale Press in a statement that he’s both “pro-Israel and pro-Palestine,” adding that “supporting the security of Israel and the rights of Palestinians are not mutually exclusive. In fact, they are entirely intertwined.”

Raphy Jacobson — a senior at the High School of American Studies — says he faced a lot of pushback from his religious friends and family for volunteering on Bowman’s campaign last year that ousted “friend of Israel” Eliot Engel from his congressional seat.

As someone who went to Jewish day school and was active with his synagogue, Jacobson said he was very pro-Israel from a young age. But as he got older and became involved with progressive politics, Jacobson’s thinking began to evolve.

“I have friends and family who live in Israel, and yes, I want them to feel safe,” Jacobson said. “But how is what the Israeli government is doing going (to) create safety for them? And how is unilateral support of their actions by the U.S. actually creating long-term safety?

“Because it’s frankly not. And how can you stand by and think this treatment of Palestinians is at all acceptable?”