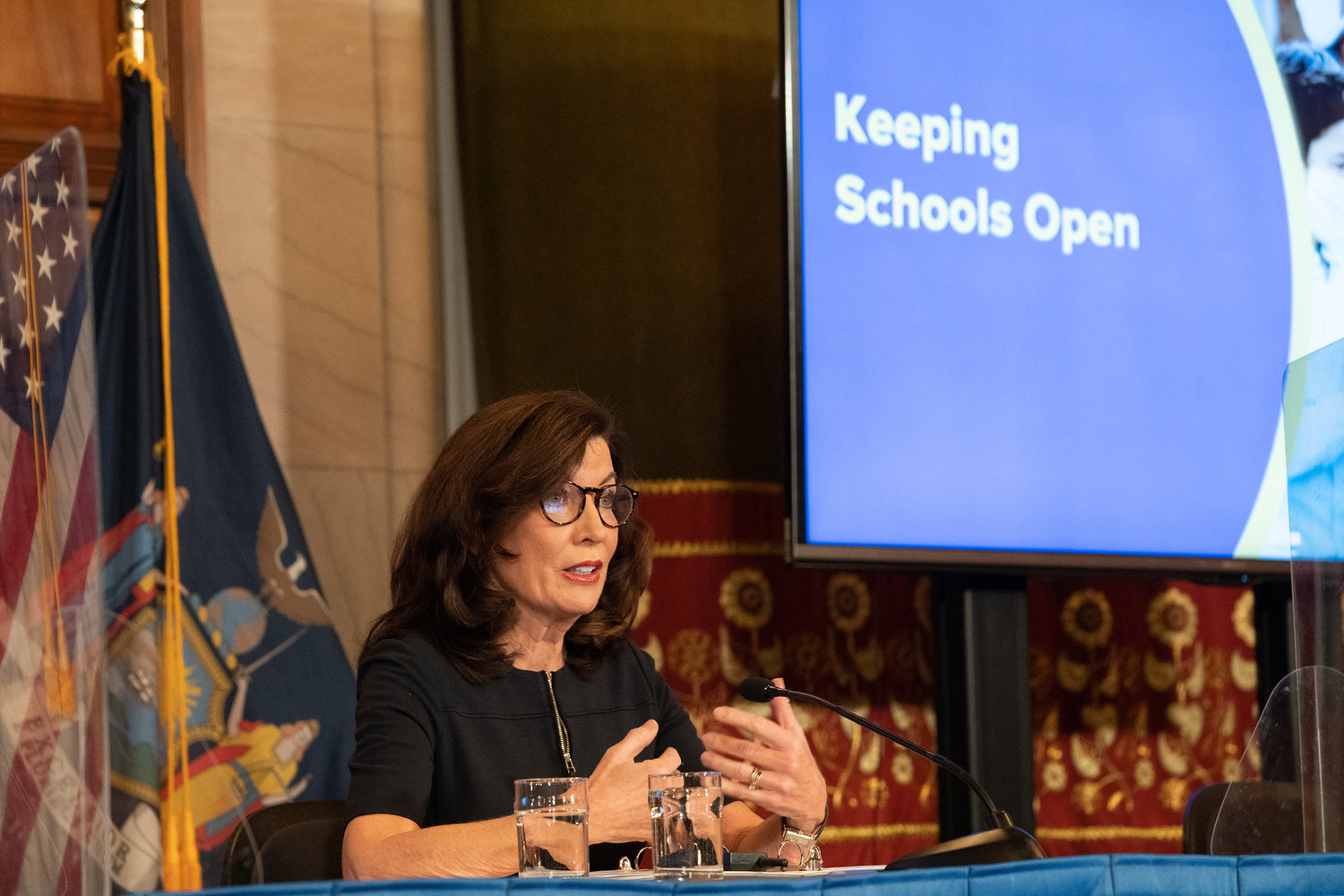 Gov. Kathy Hochul says she is sending 2 million COVID-19 tests to New York City public schools, which could make many of them available just after the winter break as omicron variant cases rise.
Office of Gov. Kathy Hochul/Don Pollard
By SARAH BELLE LIN

In a rather unorthodox sense of the word, gifts are coming — not from a jolly man in a red suit and reindeer-pulled sleigh, but from Albany. More specifically, Gov. Kathy Hochul's office.

City schools will be gifted a million COVID-19 test kits, which are now in considerably high demand as the omicron variant surges.

"We've been ordering tests," the governor told reporters Monday. "Just to make sure there's no confusion, when we say a million testing kits, there's two tests in every kit."

Planes loaded with test kits are expected to arrive as early as Tuesday, eventually making their way to schools through the Boards of Cooperative Educational Services, or BOCES. How many tests each school receives will be based on case rate by each educational district.

It's not immediately clear how many of the 2 million tests will arrive at schools in this part of the Bronx, but at least three of its public campuses are under partial quarantine — P.S. 7 Milton Fein School, P.S. 37 Multiple Intelligence School, and the nearby Marble Hill High School for International Studies at the John F. Kennedy Campus.

They joined a few others that just ended quarantines after Christmas, including P.S. 81 Robert J. Christen School, Riverdale/Kingsbridge Academy, and P.S. 95 Sheila Mencher.

How the tests are allocated to students depends on the individual educational districts themselves, Hochul said. It could look like sending tests home with children after the first day, or using them to conduct tests again on-campus.

"We will leave that up to them," the governor said. "But it is our responsibility to help them with their amassing the necessary number they require."

COVID-19 cases have jumped from under 2 percent positivity among those tested over the summer to rates above 15 percent in the Bronx as of Monday, according to Hochul's office. Hospitalizations, however, also have grown, but nowhere at the same pace.

Now that vaccines are widely available for children 5 and older — with a mandate of most to have at least one vaccination shot before dining out in many city establishments — there may be another order coming down from the state.

"We want them boosted at some point," Hochul said. "As soon as possible."