Moller mansion on brink of extinction 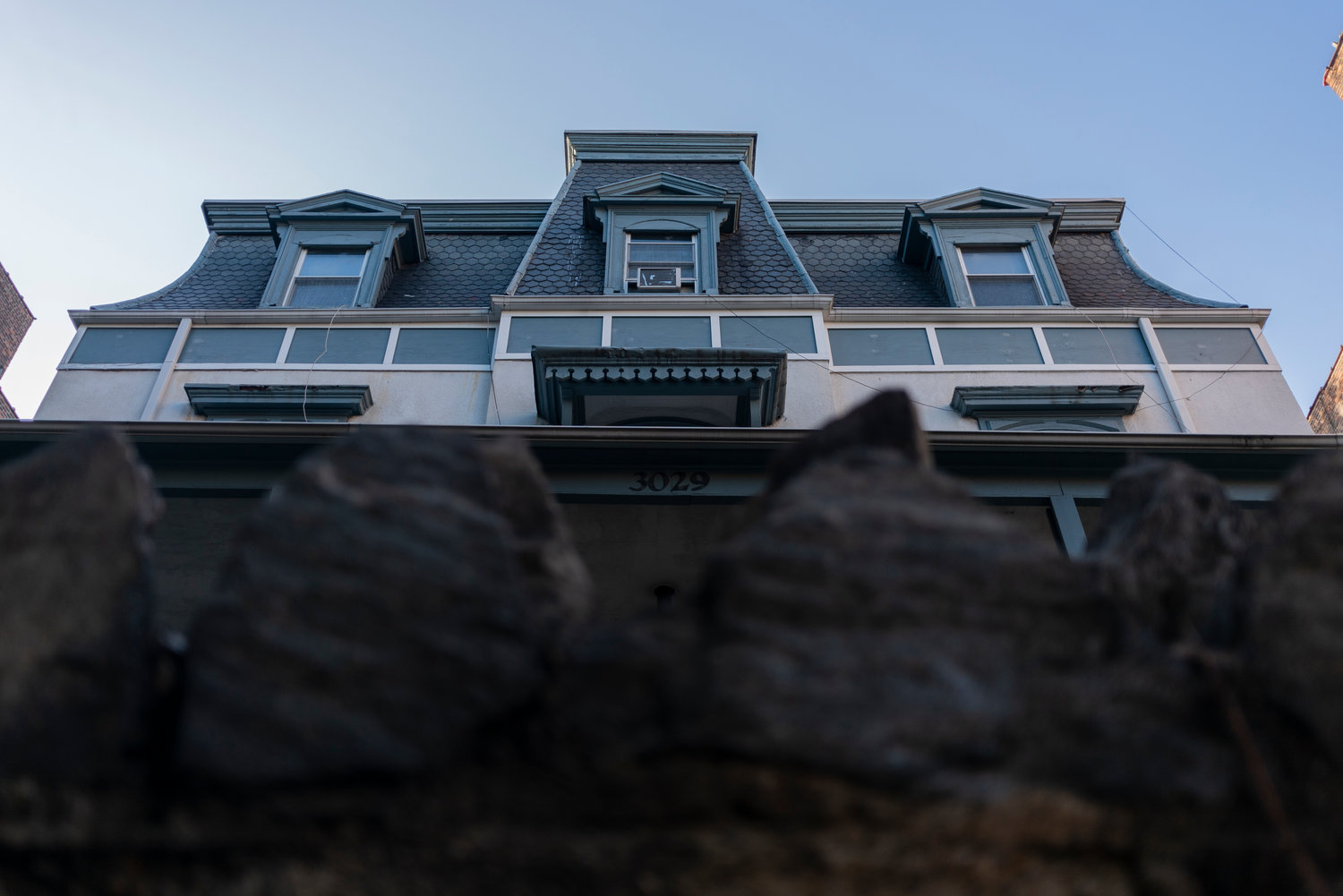 The stone wall separating the Moller Mansion from the sidewalk lining Godwin Terrace makes it hard for many to see the 150-year-old structure. Still, surrounded by more modern brick apartment buildings, this relic of the past has certainly looked out of place.
HIRAM ALEJANDRO DURÁN 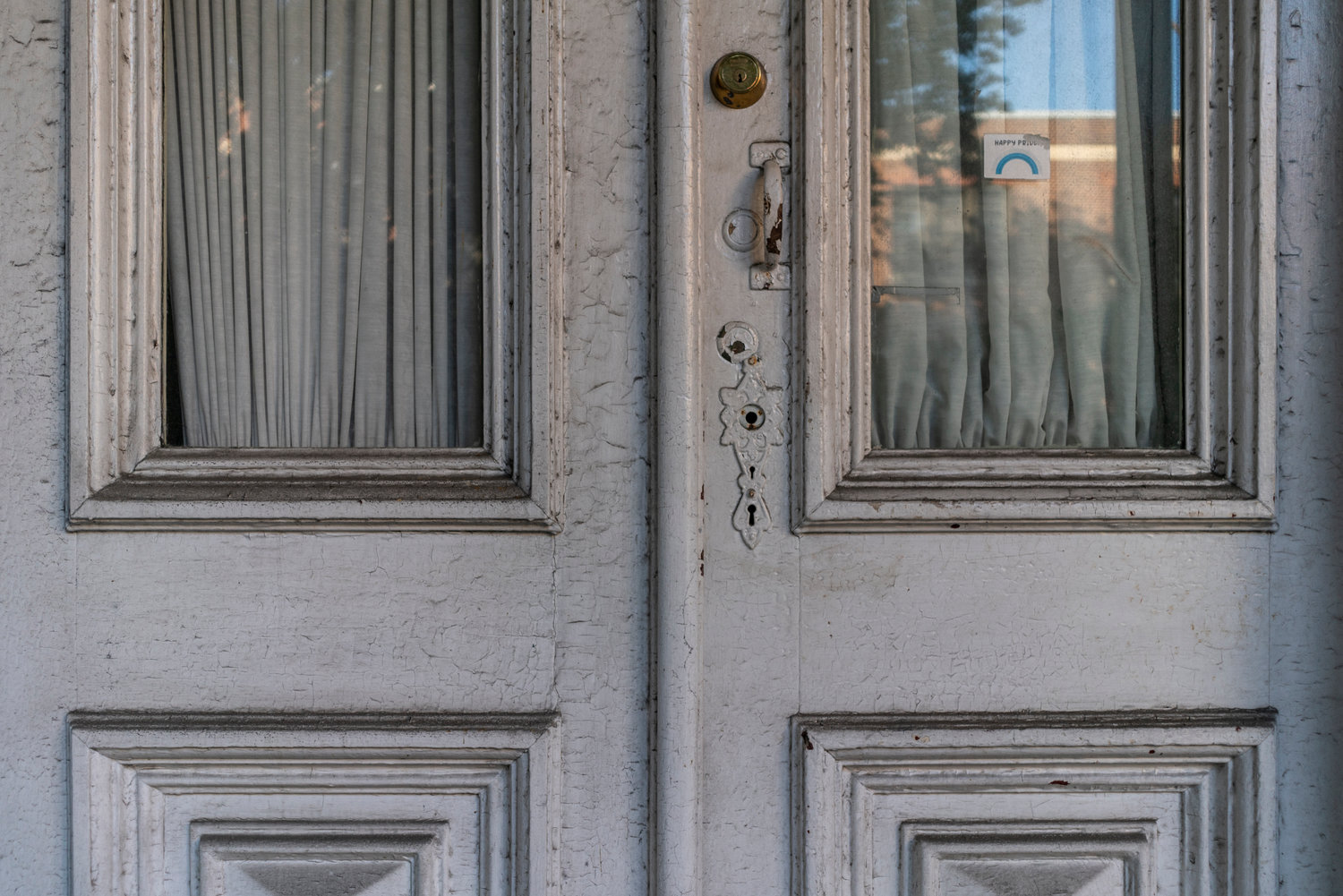 Chipping white paint covers the old doorknob and keyhole at 3029 Godwin Terrace. For the first time in decades, the home has changed hands, going to a nearby developer for $1.5 million, and almost ensuring its days are numbered.
HIRAM ALEJANDRO DURÁN 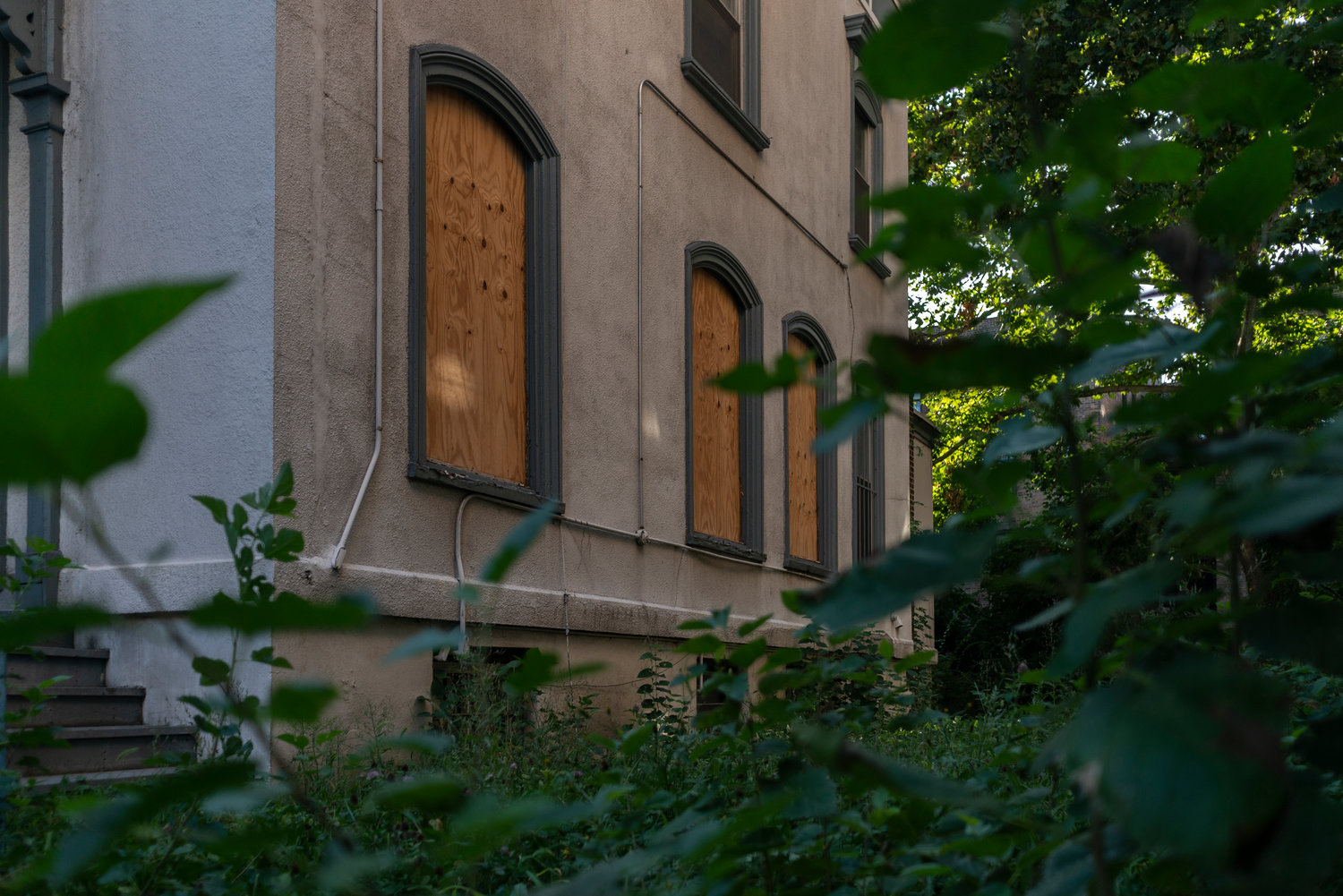 Over the lowest points of the stone walls surrounding the Moller Mansion, passersby can see some of the boarded-up windows of the longtime convent at 3029 Godwin Terrace.
HIRAM ALEJANDRO DURÁN 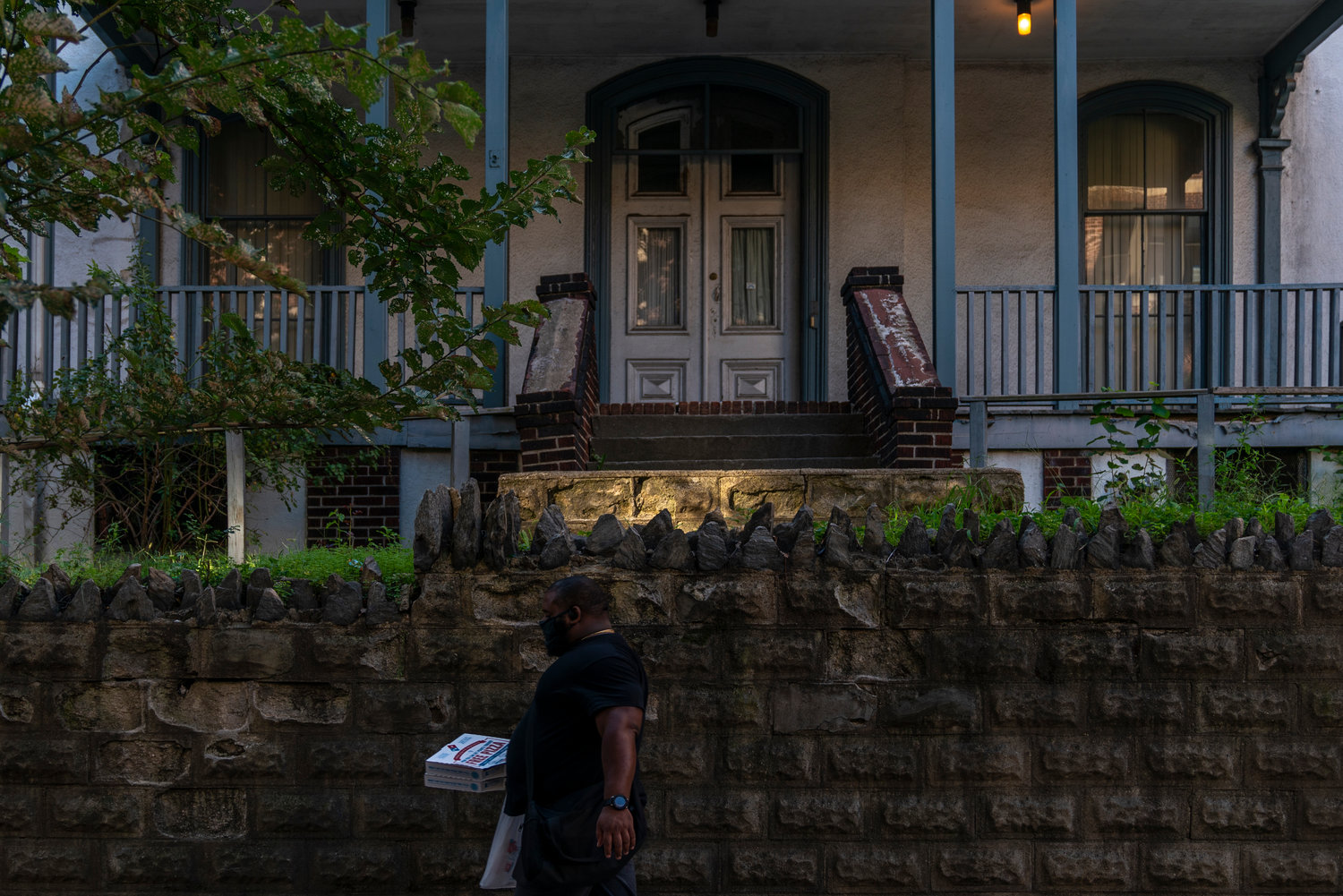 A person walks past 3029 Godwin Terrace with a pair of pizzas in hand, creating a much different streetscape than what the Moller family saw when they first moved in back in 1870.
HIRAM ALEJANDRO DURÁN 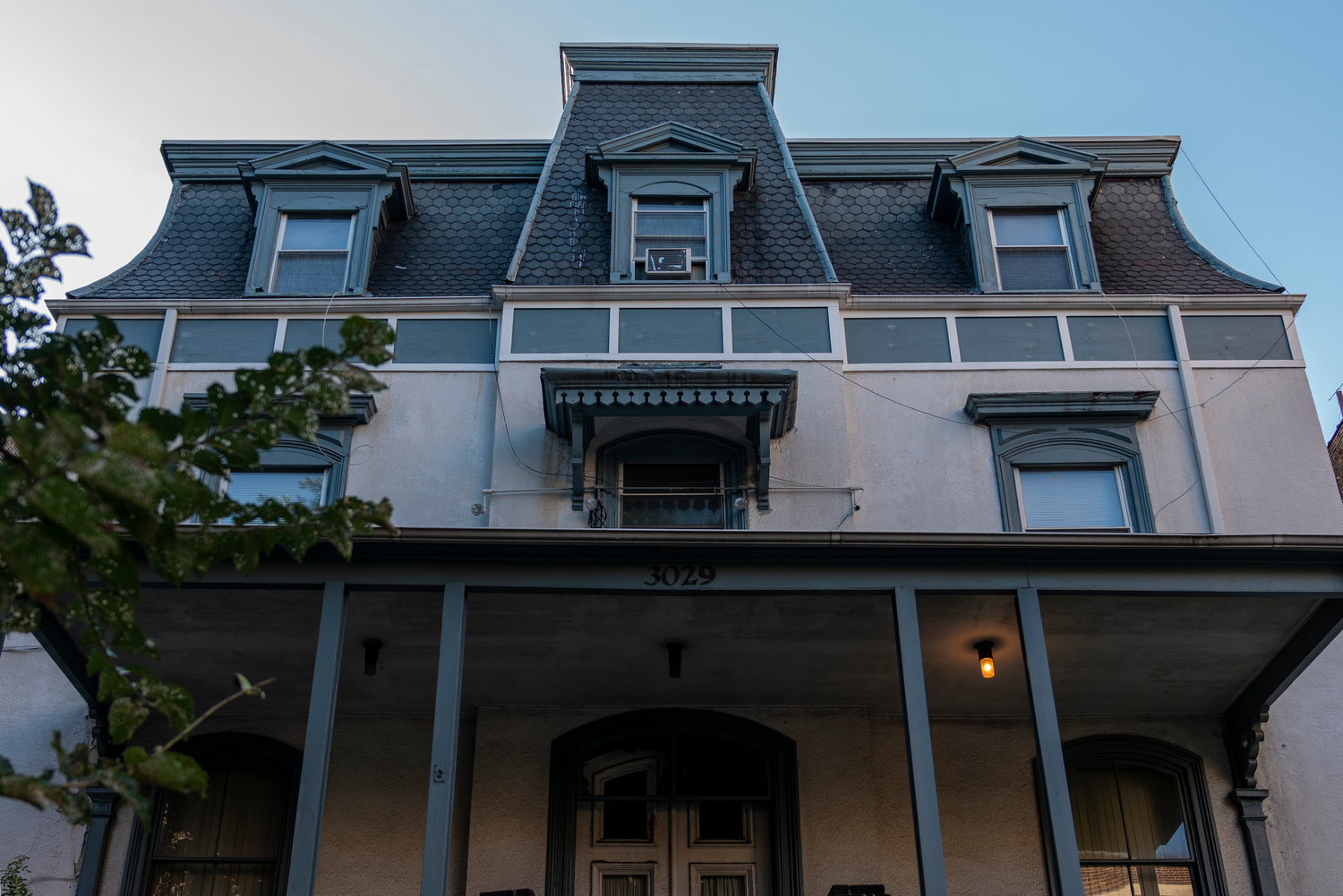 For the first time in decades, the Moller Mansion at 3029 Godwin Terrace has changed hands. But its new owner — who paid a hefty $1.5 million for the property — is likely more interested in the land than the home, meaning its days are almost assuredly numbered.
HIRAM ALEJANDRO DURÁN 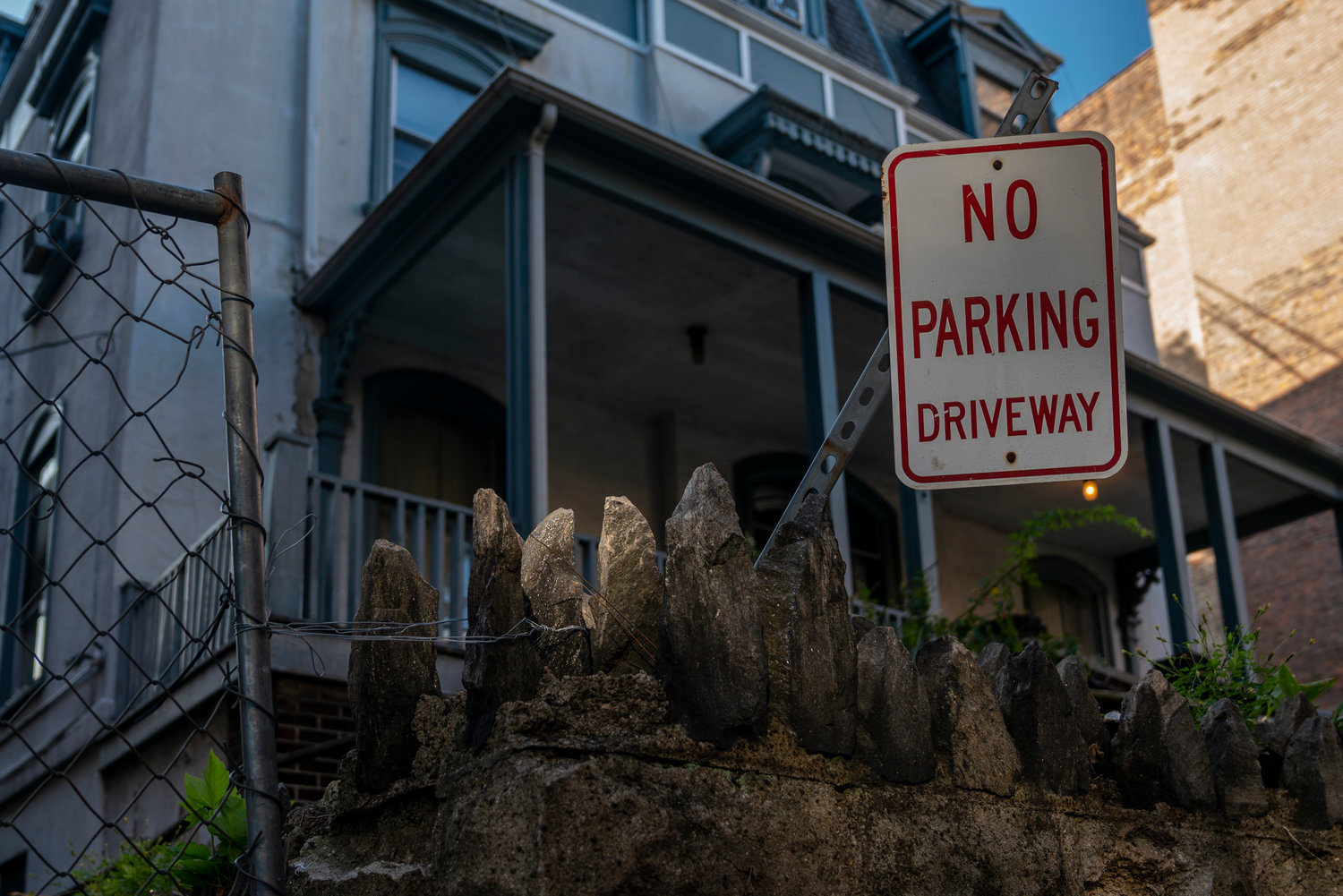 A fence held together with thin metal wire closes off the driveway at 3029 Godwin Terrace.
HIRAM ALEJANDRO DURÁN 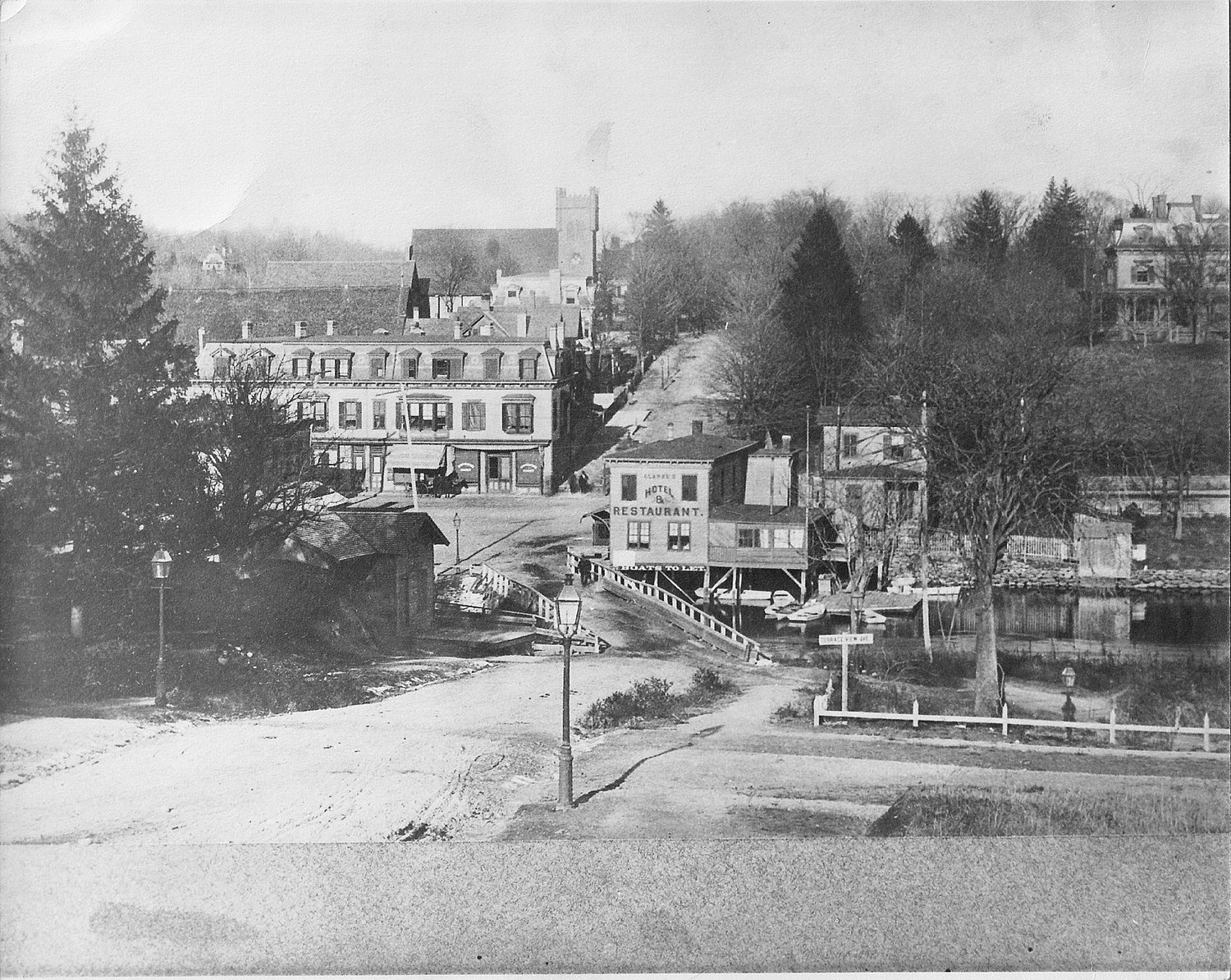 An early picture of Kingsbridge features the old route of the Spuyten Duyvil Creek, as well as the Moller Mansion in the upper righthand corner.
Courtesy of Kingsbridge Historical Society Collection

This is likely what the view would have been in front of the Moller Mansion in the early 1870s, with heavy oystering on Spuyten Duyvil Creek, and even early telegraph lines.
Courtesy of Kingsbridge Historical Society Collection
Previous Next
Moller Mansion
3029 Godwin Terrace
Bronx, NY 10463
View larger map
By MICHAEL HINMAN

Author H.G. Wells once said that “human history becomes more and more a race between education and catastrophe” — a common theme shared through the ages about not learning from what came before us.

While history is likely best recorded in words and pictures, there’s something special about having access to tangible remnants of history like the Wright Brother’s first airplane, or Apollo 11’s lunar module.

The historical impact of the three-story mansion at 3029 Godwin Terrace is much quieter than mankind’s ascent into the skies and the heavens, but it has influence nonetheless. It seems almost out of place in its Kingsbridge neighborhood, facing P.S. 207 and surrounded by apartment buildings.

But that wasn’t always the view from the front porch of what local historians refer to as the Moller Mansion. In fact, when sugar magnate George Moller moved his family into the home after it was completed in 1870, the surroundings were described as “in perfect keeping” as center of its own estate, with “delightful views of the Harlem River,” according to the Yonkers Statesman.

Yet, one of the few remaining connections between this neighborhood and its time before it was part of the Bronx could become history itself. For the better part of a century, this historic home remained in the hands of the Roman Catholic Church. That changed, however, last month when the Archdiocese of New York let go of the Moller Mansion for $1.5 million.

The home itself has seen better days, but neighbor speculation suggests the high price tag is not for the house — but for the land it sits on. Progress may have finally arrived at 3029 Godwin Terrace, and it will likely come through the sacrifice of the Moller Mansion.

“I would be very sad to see it go,” said Nick Dembowski, president of the Kingsbridge Historical Society. “It was a gem when it was built, and it is even rarer now.”

The home was purchased by Galaxy General Contracting, which maintains a base of operations just a couple blocks away on Albany Crescent. The Moller Mansion was more than a century old when Steve Zervoudis founded the company in 1981, according to its website. And many of its touted projects are apartment buildings in different parts of the city, although Galaxy has taken on other projects, like building Saint Peter the Apostle Greek Orthodox Church on Kingsbridge Avenue.

None of its touted projects are historic home restorations, and the company didn’t return respond to requests from The Riverdale Press seeking their plans for the lot. No permits have been filed at this point, but Dembowski doesn’t have high hopes on the home’s future. And there is much for him to stand on if Galaxy decides to indeed demolish the house.

“There is no point in ‘opposing’ this from happening as there is no law against tearing down old buildings and putting up new ones,” Dembowski said. “If there was, there would be very few people living here. But that does not change the fact that this is a beautiful old building that would be lost, and a powerful reminder of the neighborhood’s past.

“Generations of neighborhood kids grew up admiring that house. Many of those kids are old folks now, and have written to me that it would be a shame to lose it.”

Kingsbridge was so different

George Moller was married to Emma Godwin, whose family owned a mansion just around the corner — the namesake of Godwin Terrace, Dembowski said. Both families were quite wealthy, and were major financial supporters of what is now the Episcopal Church of the Mediator.

“Kingsbridge was more of a small town back then, although it was really a section of Yonkers until 1873, when it became an independent town for a year before becoming part of New York City,” Dembowski said. “The landscape was completely different. West 230th Street was not a street at all. It was the Spuyten Duyvil Creek, which separated Manhattan from the Bronx.”

In fact, many of what are now streets were waterways back then — like Tibbett Avenue actually being Tibbett’s Brook. Many of the homes and businesses served these waterways.

“Along the Spuyten Duyvil Creek, there was a small business section where West 230th is today, with a blacksmith shop, a grocer, an oyster shack, a place to buy feed for your horses and coal for your stove,” Dembowski said. “And then, of course, there was the King’s Bridge — the first bridge to Manhattan ever built. It crossed the Spuyten Duyvil Creek at West 230th and Kingsbridge Avenue. It is still there, buried under the street.”

Over the years, the Mollers said goodbye to the home, and it became incorporated with the church that was growing around it, the “independent” St. John’s Parish, beginning in the late 1880s. The home was one heated by four separate fire places — its chimneys incorporated into the mansion’s unique roof structure. A porch wrapped all the way around the house as well — features that would disappear over time, especially after the structure was moved 100 feet to make room for the expanding St. John’s.

“We’re not really sure how much the house has changed over the years,” said Pete Ostrander, Dembowski’s predecessor at the historical society. “It looks the same, but what they did inside, I have no idea.”

The mansion has served primarily as a home for members of the clergy — a role it played almost up to its sale last month. Few outside the church have even been inside, so what’s still original within its walls is anyone’s guess.

Preserving buildings with historic significance is something Stephanie Coggins has been dedicating herself to since her unsuccessful attempt to save the Villa Rosa Bonheur apartment building in Spuyten Duyvil. Neighbors just had no warning that the structure was going to be razed, she said, all so that new apartment buildings can be constructed on top of their ruins.

“All I can say is that developers are intent on filling every available inch of space with the cheapest, ugliest cement and glass rental buildings to turn a profit,” Coggins said. “The streetscapes in the northwest Bronx face imminent extinction for no good reason.”

But it doesn’t have to be that way. Coggins has begun a recent push to create a new subcommittee with Community Board 8 that would focus on historic preservation — something the neighborhood activist says is ingrained in the city’s 197-a development plan intended to better regulate new construction in the city.

One committee that such a group could be a part of is CB8’s land use committee, run by Charles Moerdler, who says this part of the city is now experiencing the kind of “locust-like invasion of speculative hit-and-run developers” that plagued Williamsburg and other parts of Brooklyn several years ago.

“This trend is why I have urged that it is high time for a new 197-a plan,” Moerdler said, “one that provides preservation, and at the same time targets specific affordable housing opportunities.”

As far as a subcommittee goes, Moerdler says that would require more thought.

“There are only so many people who can work on the extensive research and preservation required for landmarks designations,” he said. “By addressing select issue on a site-by-site or issue-by-issue basis, we have been been able to involve interested board and non-board members interested in particular projects.”

Keeping links to the past

Such a committee could identify older buildings that might be vulnerable to new development, like the Edgehill Church in Spuyten Duyvil, or the 18th century Hadley house on Post Road that Dembowski says has fallen into some disrepair.

“History is important to our community as it answers the question of why we are all here,” he said. “This house is a link to the past. Within one block, the native Munsee people and their ancestors fished for oysters for centuries. British and American soldiers clashed. Enslaved Africans worked and were sold. George Washington, John Adams, Edgar Allan Poe all visited.

“I could not tell you the story of that block without talking about buried skeletons, decapitated statues, Aaron Burr and Alexander Hamilton. Having links to the past causes us to ponder and learn about our history. And ignorance of history contributes to many serious problems.”