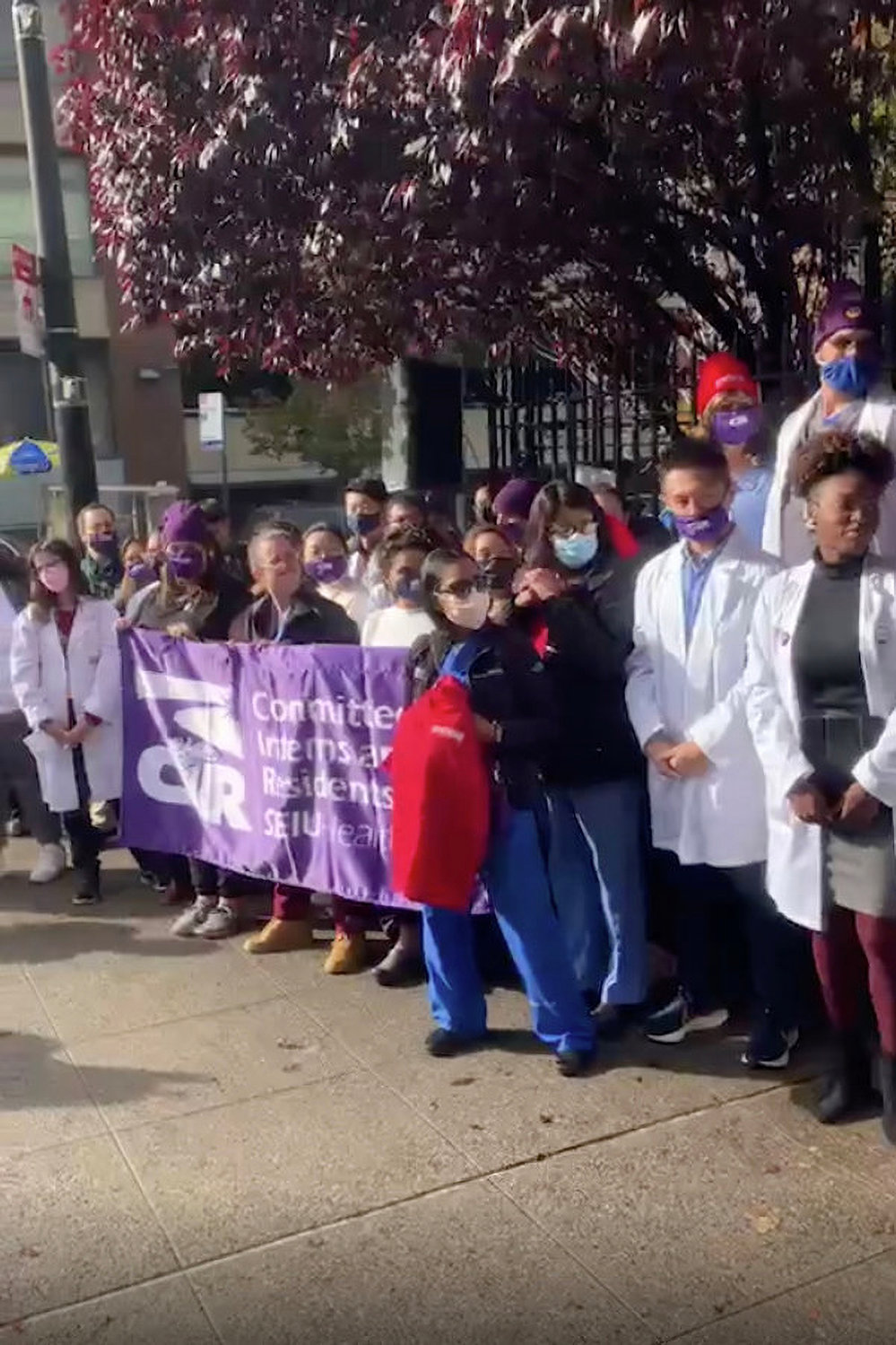 Representatives of Committee of Interns and Residents held a press conference Nov. 1 outside the teaching hospital, Montefiore Medical Center, on their plan to be recognized as a union for residents and interns for being overworked due to staff shortages and clinic closures.
Contributed photo 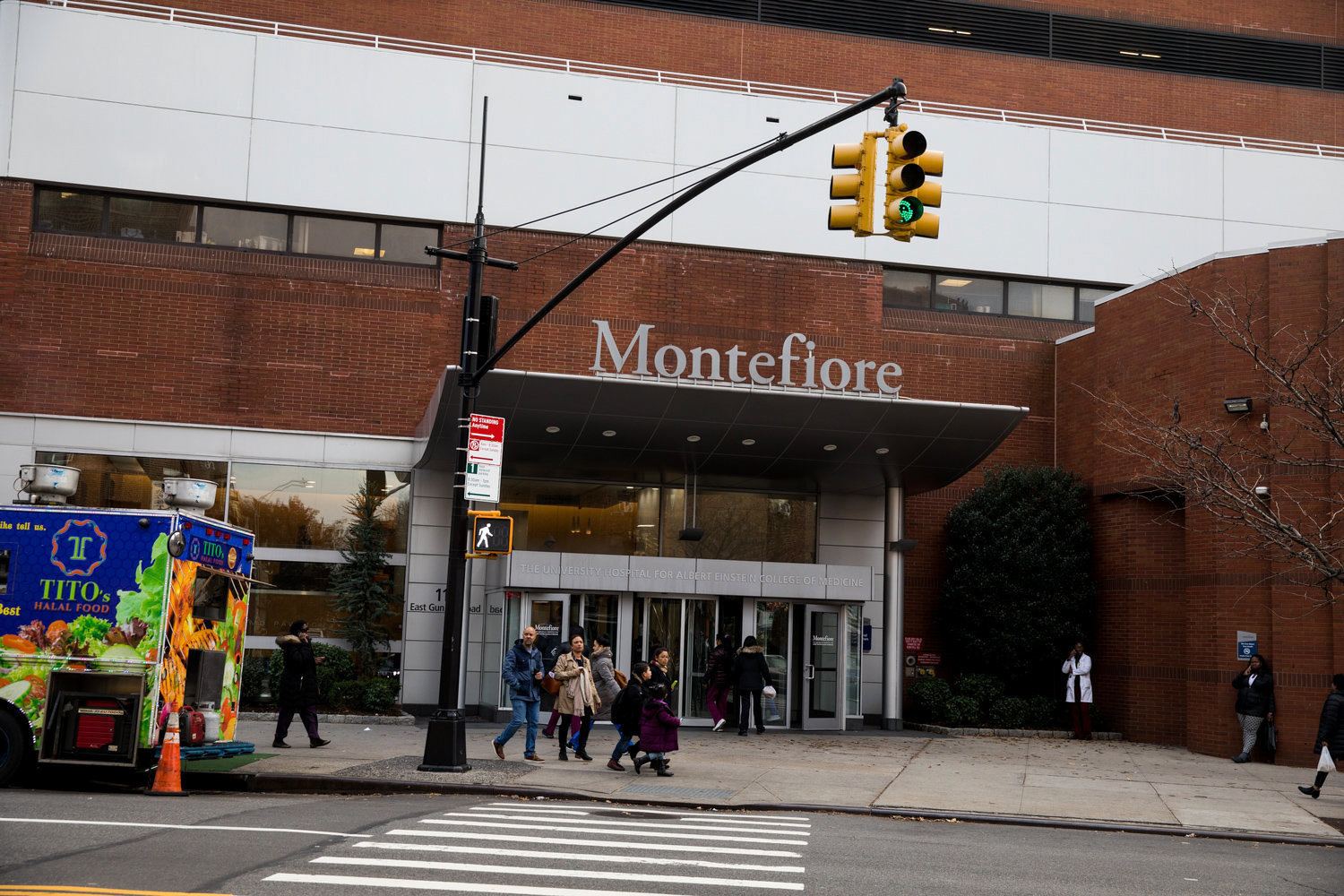 The outside of Montefiore Medical Center, where union organizers for residents and interns, held a press conference last week seeking recognition of their union by the hospital.
JULIUS CONSTANTINE MOTAL / File
Previous Next
By Stacy Driks

When Dr. Aubrey Vinh and one of her attending physicians had free time in Montefiore Hospital, they took it upon themselves to transport a patient down to imaging because they knew transporters were overworked that day.

“At times, being the squeaky wheel that gets the grease to help move patient care forward,” said Vinh, a first-year resident psychiatric intern.

She said she has no doubt in her mind that particular job would have been completed. But it wound up getting done more efficiently than a tired transporter could have done.

Many resident physicians fill in roles of different positions that are not theirs, which adds to everyone’s responsibilities.

One of the largest employers in New York City, Montefiore has 10 member hospitals and more than 200 outpatient ambulatory care sites. Meanwhile, for the past year Bronx resident physicians have quietly been trying to form a union that would be recognized by the hospital.

Calling themselves the Committee of Interns and Residents — which goes back 60 years — the group, which is a local of the Service Employees International Union, sought recognition from the hospital last week. That group represents more than 22,000 resident physicians and fellows in the country.

But the hospital failed to recognize the union.

She also noted that since a supermajority of residents have already signed authorization cards in favor of joining the union. They will do whatever it takes to establish a union, she said.

“This historic organizing effort is the most recent in an ongoing wave of house staff unionization across the U.S., with more than 2,000 residents choosing to join CIR/SEIU within the last six months,” said Dara Streit a public relation employee for Telegraph LLC.

This request for recognition comes at a time when working conditions, which were at a low point during COVID in the health care system. Medical professionals claim nothing has changed.

“The last few years have brought to light how fragile the U.S. health care system is and to form a union is our way to fortify it,” said Nessim.

She claimed that shortages have impacted patient care — and her life.

Vinh, Nessim, and more than 1,200 residents and fellows wanted immediate recognition of their union after being overworked and understaffed.

“So many of us chose to do our residency here because we want to work in the Bronx, and with the diverse and historically underserved community that lives here, we know we can do more,” said Dr. Rex Tai, a second-year internal medicine resident at Montefiore. “Our hope is that through our union, we can advocate for the resources we need to help improve healthcare access in the Bronx.”

On Nov. 1, residents and fellows held a press conference demanding Montefiore to recognize their union. They discussed better pay, compensation and benefits.

The hopes looked high for these residents as they received around 70 percent of the in-house vote in support of this. The effort also has gained support from local electeds, including state Sen. Gustavo Rivera and Assemblyman Jeffrey Dinowitz.

“The National Labor Relations Act guarantees our residents the right to determine whether or not they should be represented by a union,” said Joe Solmonese, Montefiore spokesperson. “We respect their right to make that decision through a secret ballot process, free from outside influence.”

The hospital did not directly say whether it rejected the union. But they rather had them go about it a different way. And union organizers did not respond following the announcement.

Dr. Jim Yang, emergency medicine resident at Montefiore and Jacoby Medical Center, explained the contracts that the hospitals give.

Even though there are 84 residents in the emergency resident program, he says half of his residents are Jacoby CIR employees and the others work directly for Montefiore. Both hospitals where he is employed serve contracts under different benefits and rights.

“The way staffing works in the emergency room — and many other departments here is that the contracts are split,” Yang said. “Which contract we get is an unfortunate luck of the draw, and it shouldn’t be this way.”

If residents are having problems on the job, they are unable to change employers and cannot negotiate to improve working conditions.

“Even though we’re the ones treating our patients every day, we don’t get a say when our employers make decisions whether they want to close down clinics or shut down essential programs,” Yang said. “They don’t understand the consequences it means for our community.”

The Family Health Clinic in Fordham is one example of that lack of consensus among the health care workers. Despite a petition to stop the closure in the summer signed by patients, residents, and attending physicians, the clinic was replaced under the name “Executive Medicine Concierge Clinic” as part of the Montefiore network. It plans on being a separate clinic that offers different services from the former clinic.

Nurses have supported the residents’ efforts because they recognize the issues at hand.

Vinh claimed nurses recognize that residents who are unionized help them, too. They all have a collective voice to advocate for more resources for themselves and their patients.

Before the hospital announced its statement, the New York State Nurses Association spoke out publicly at various hospitals in the city that left caregivers burnt out, which led them to their breaking point. Those members face expiring contracts on Dec. 31.

Nurses are encouraging and asking to invest in hiring more staff to ensure the safety of patients.

“We are speaking out today because Montefiore, like so many other New York City hospitals, has created a staffing crisis by failing to hire and retain enough nurses,” said Benny Mathew, RN at Montefiore and NYSNA director at large. “Nurses are suffering because we’re exhausted, and our patients are suffering because their care is delayed due to unsafe staffing.”