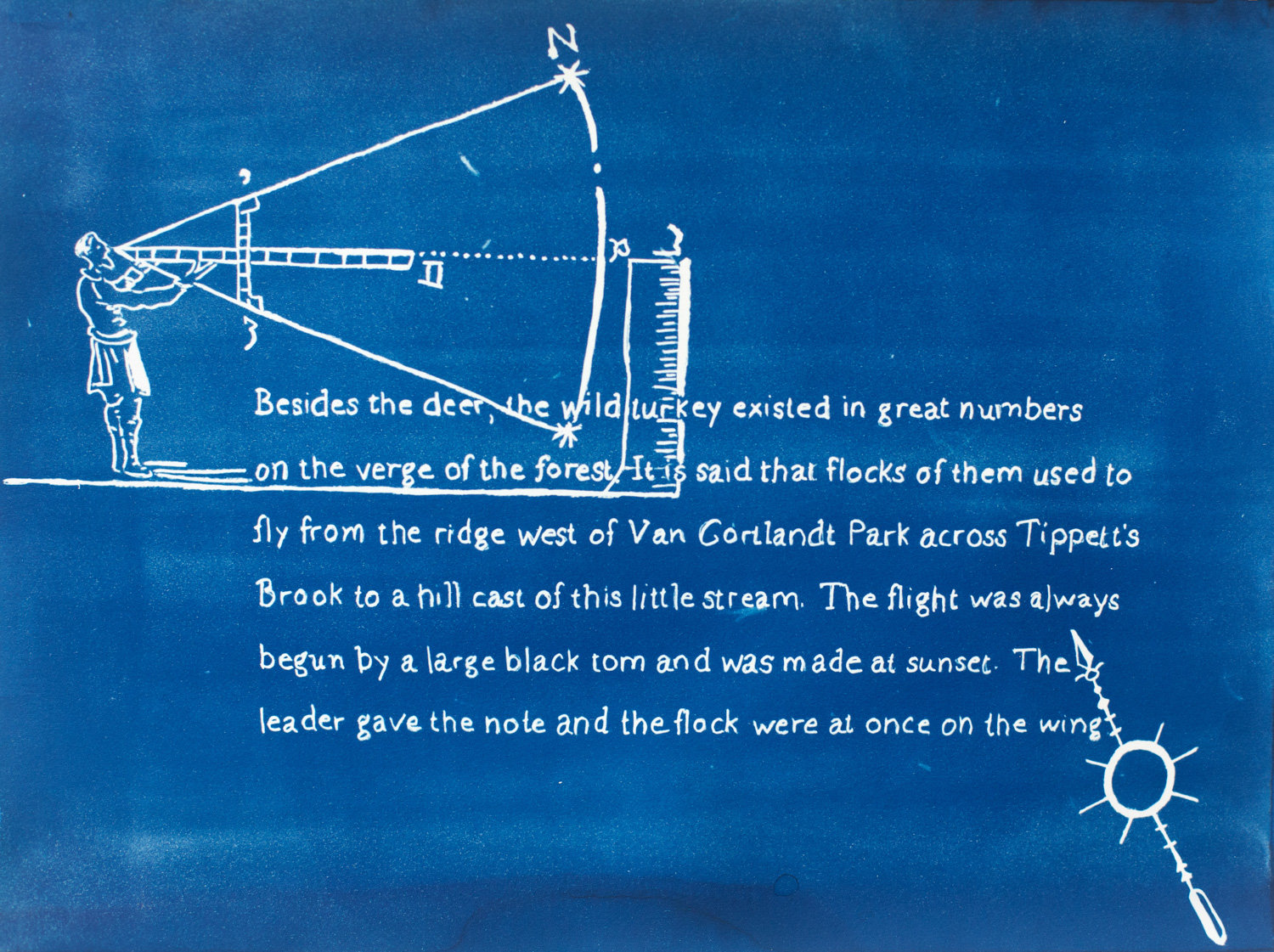 Cyanotype, a form of printmaking used for early 20th century blueprints, is utilized by artist Maya Ciarrocchi for ‘Mosholu’ to illustrate the continued presence of Tibbett’s Creek despite its current status as a hidden waterway.
Courtesy of Maya Ciarrocchi 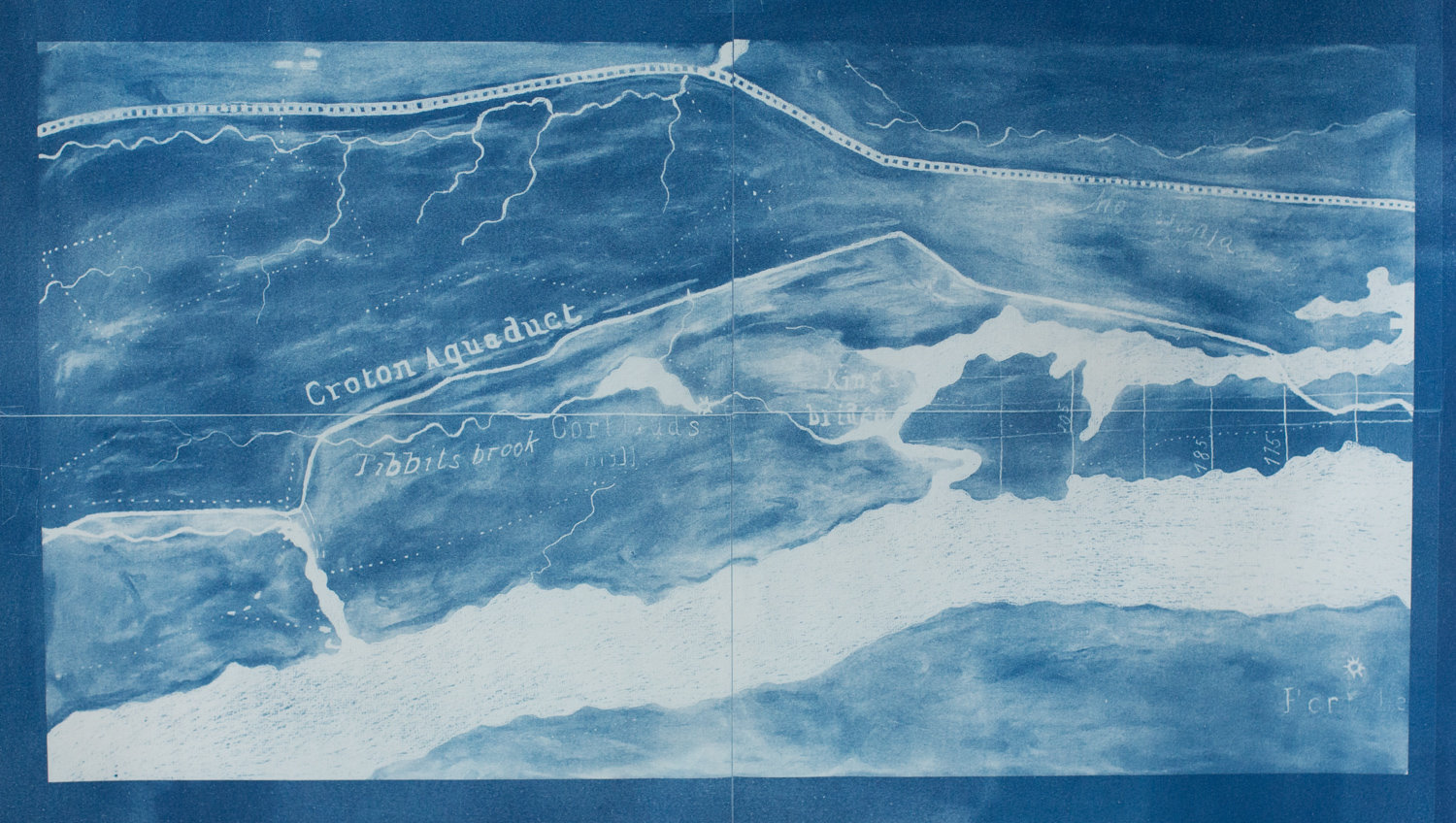 Artist Maya Ciarrocchi’s ‘Aqueduct’ is one of the many sections of her ongoing project ‘Mosholu,’ which traces the history and depictions of the now-covered Tibbett’s Creek.
Courtesy of Maya Ciarrocchi 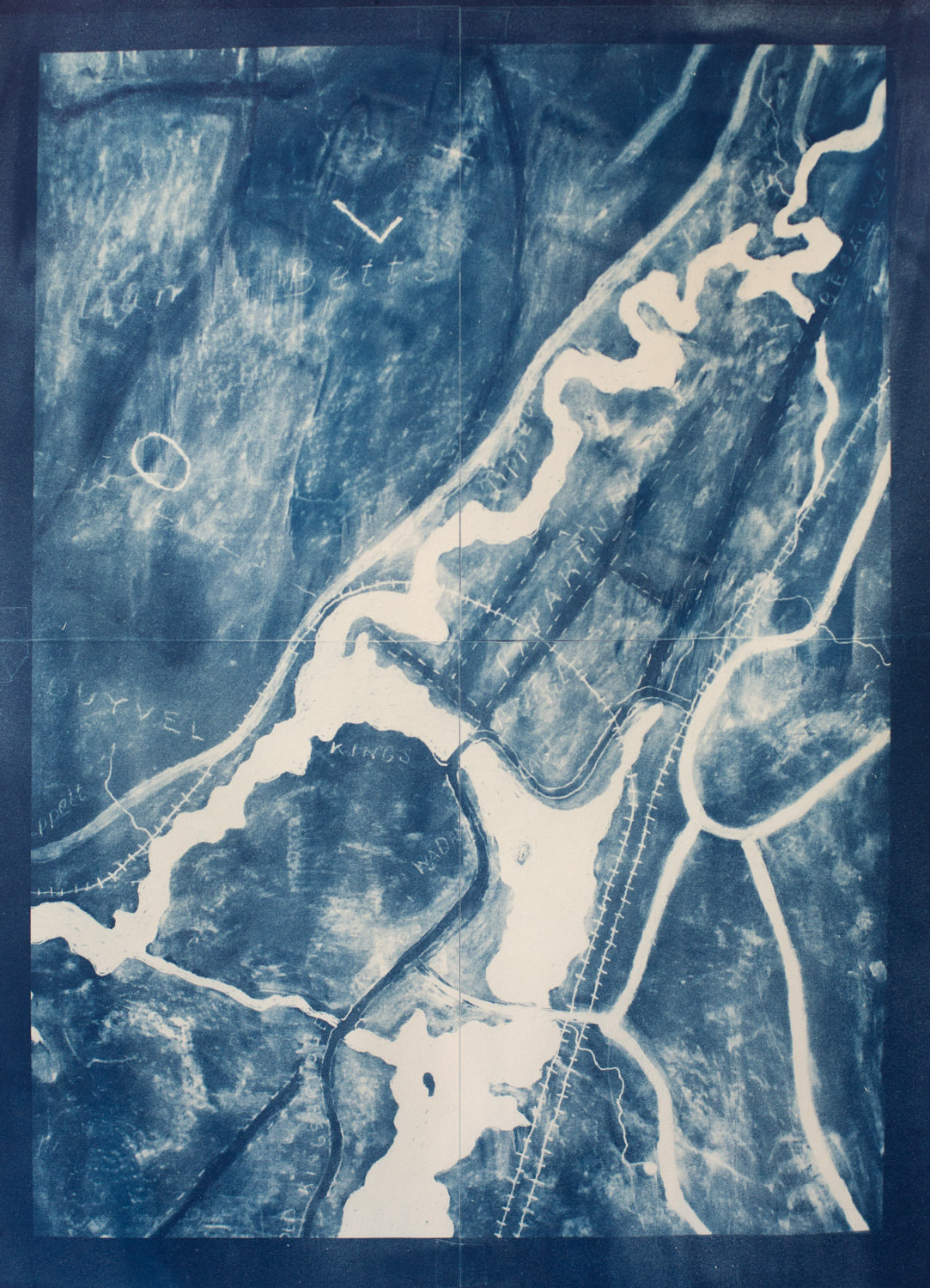 In ‘Harlem River,’ viewers can see the railroad lines which once coated part of the Bronx and influenced the landscape for better or worse in Maya Ciarrocchi’s ‘Mosholu.’
Courtesy of Maya Ciarrocchi 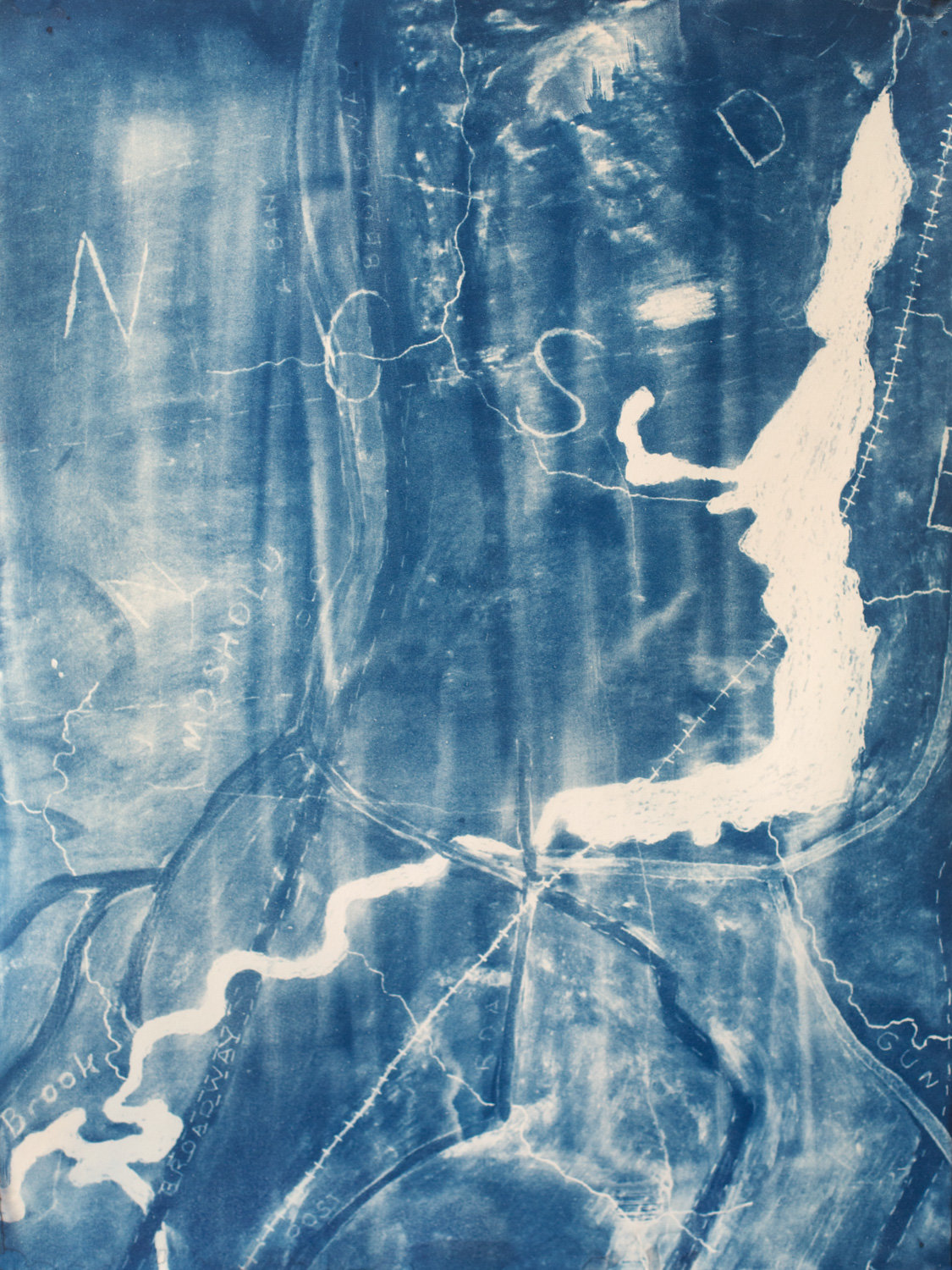 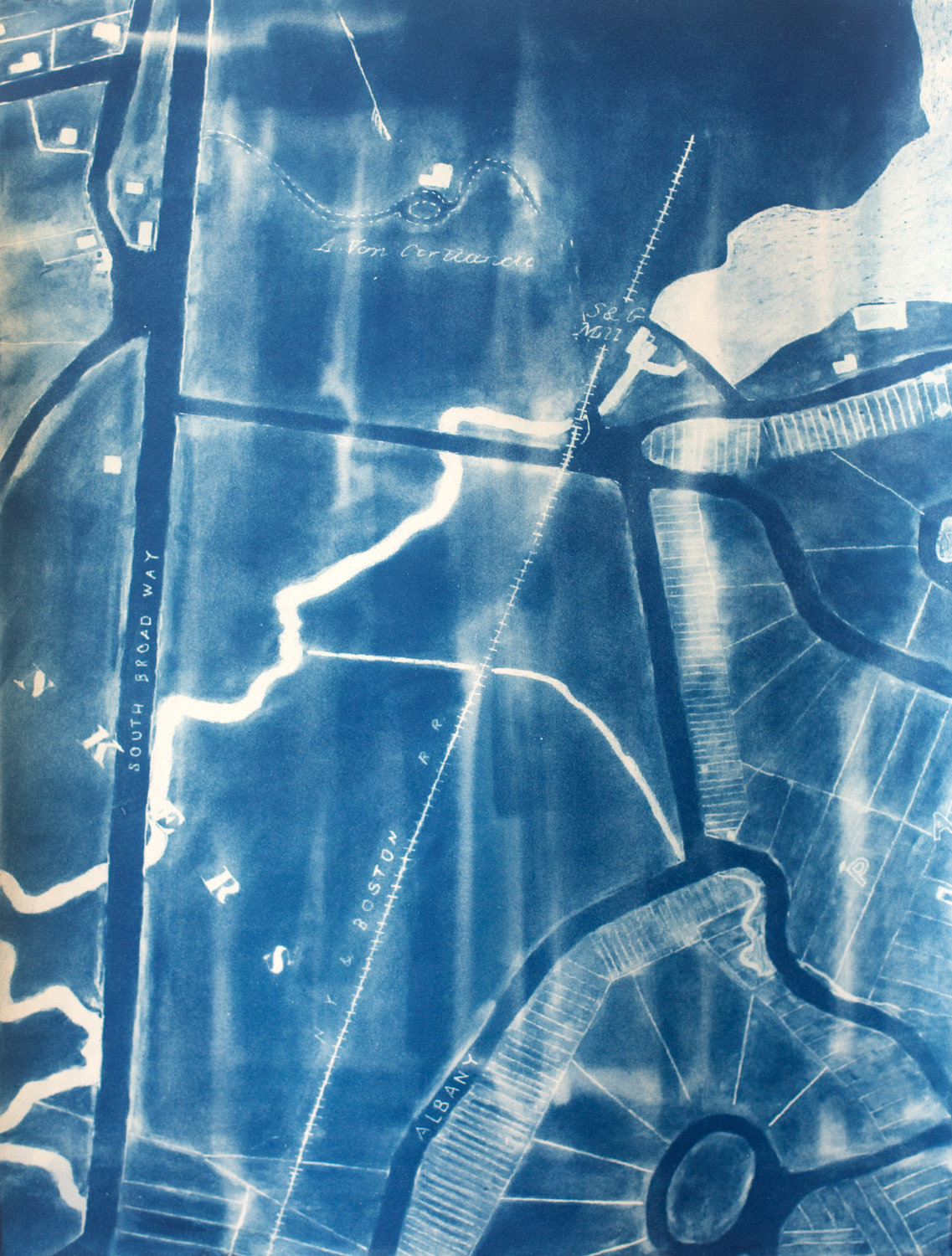 Artist Maya Ciarrocchi zoomed into archived topographical maps of the Northwest Bronx to determine the changing locations and direction of Tibbett’s Creek in ‘Mosholu.’
Courtesy of Maya Ciarrocchi 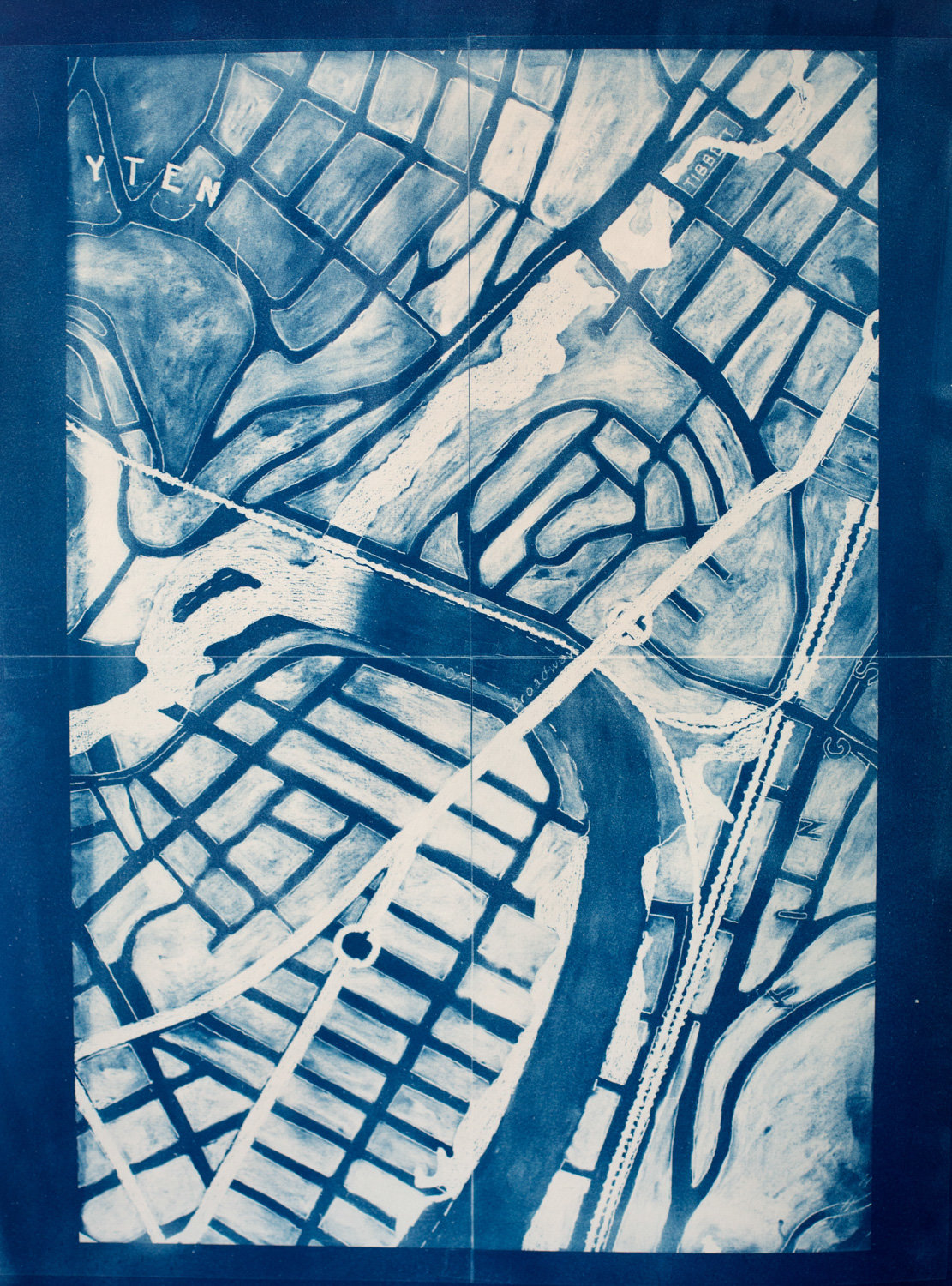 In the early 20th century, plans to cover Tibbett’s Creek began as connection to Inwood, Manhattan and further train development continued — all of which is documented in Maya Ciarrocchi’s ongoing project ‘Mosholu.’
Courtesy of Maya Ciarrocchi 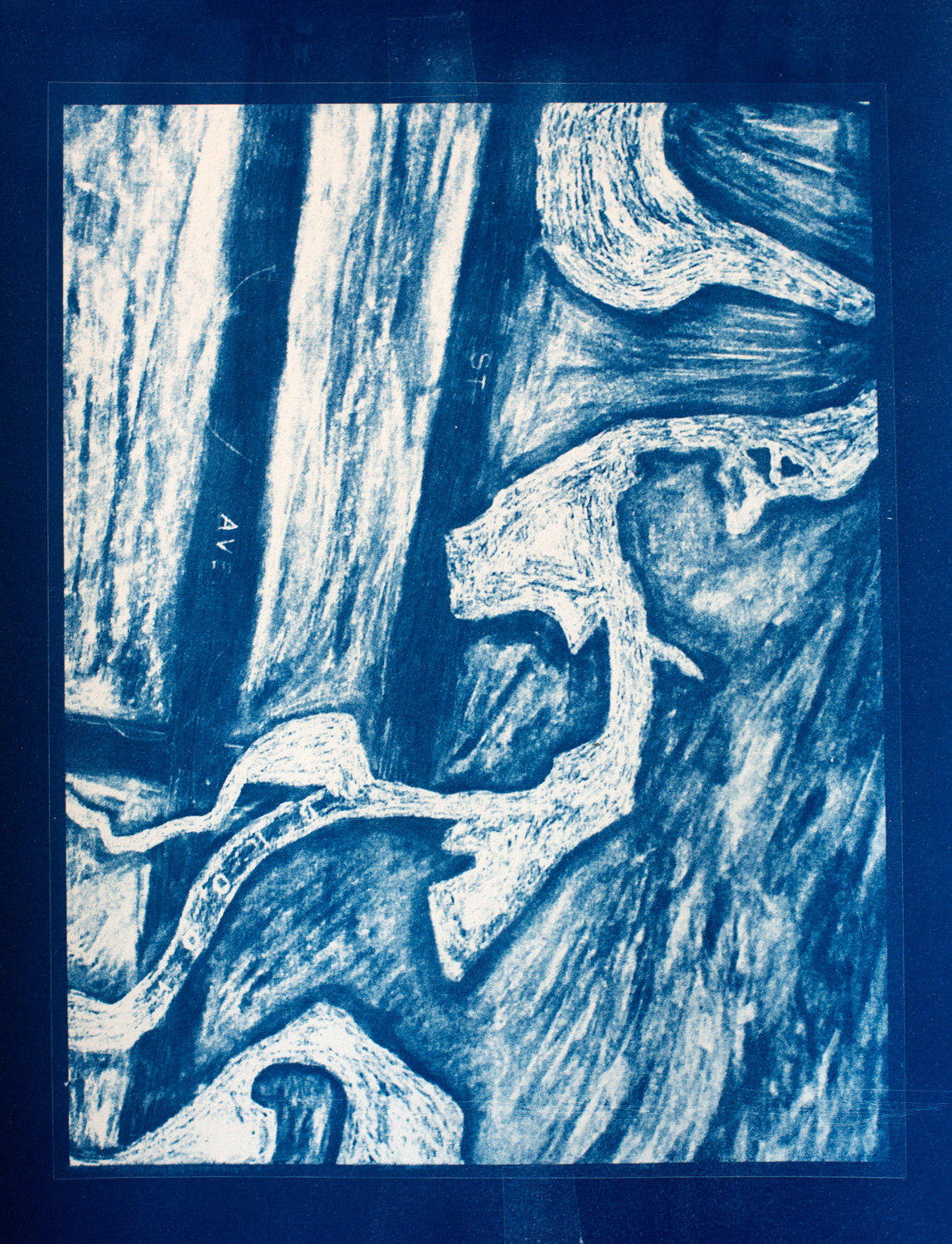 The first name of Tibbett’s Creek was Mosholu, a Lenape word for ‘soft stones.’ It’s also the title of Maya Ciarrocchi’s ongoing project, which marks the creek’s trajectory through history.
Courtesy of Maya Ciarrocchi 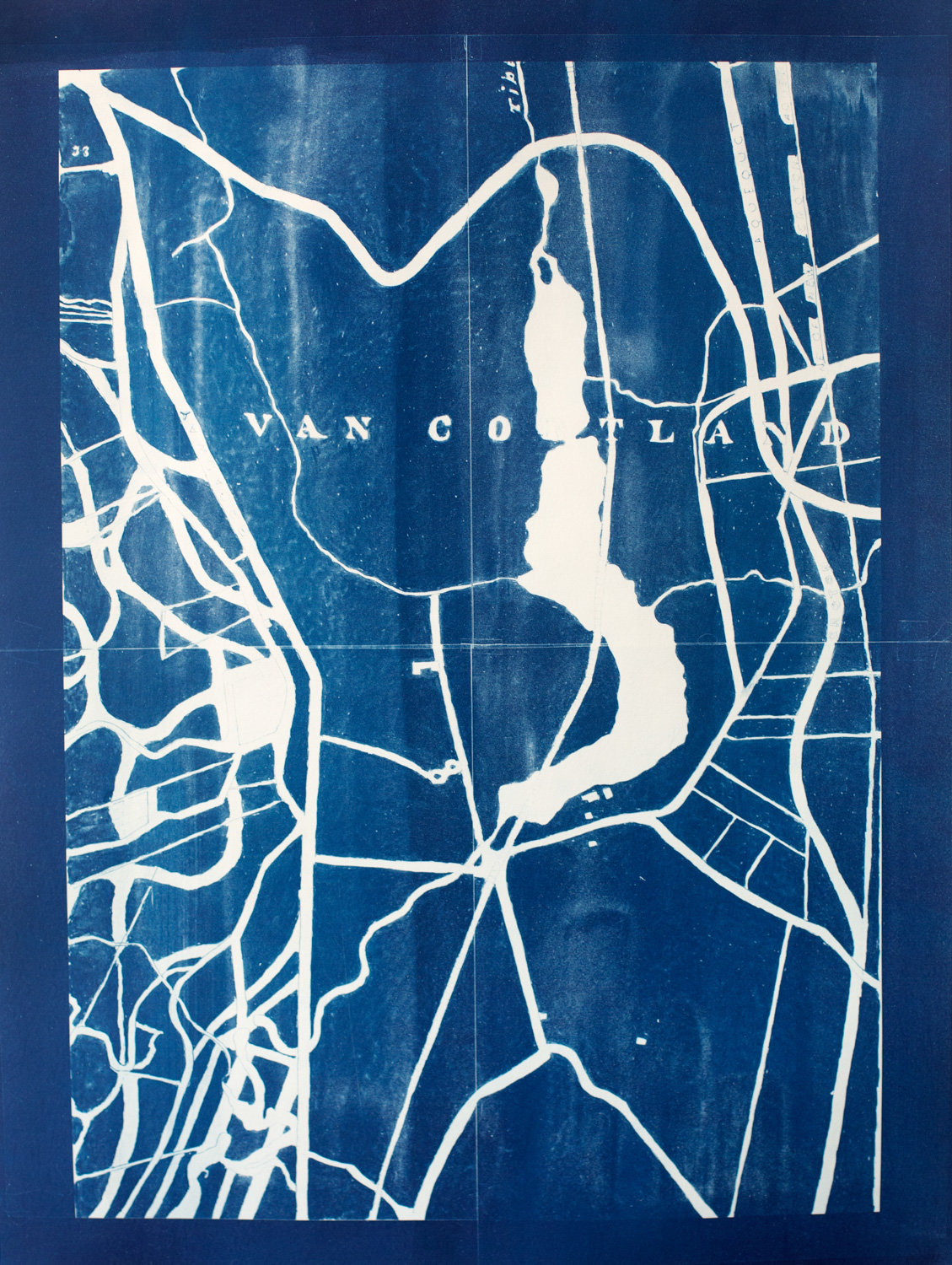 A cyanotype print of Van Cortlandt Lake and the surrounding area — which utilized Tibbett’s Creek for fishing or mill power — is included in Maya Ciarrocchi’s ‘Mosholu.’
Courtesy of Maya Ciarrocchi
Previous Next
By RAPHAEL LASSAUZE

Originally known as Mosholu, a Lenape word for “smooth stones,” the once expansive and resource-rich Tibbett’s Creek flowed through Yonkers and the Northwest Bronx, only to be hidden by early 20th century development to caverns and pipes underground.

A lack of drainage points has forced the freshwater creek to break away, bleed out. Millions of gallons have been lost. Mosholu has demanded to see daylight since the day it was cloaked by progress.

“And I didn’t always think about loss like that,” Ciarrocchi said. “But as I’ve grown older and experienced it, it’s often on my mind. Loss and displacement and the presence of absence have become very important to me.”

It was a 2016 New York Times article about constant flooding and the prospect of bringing the creek back to the surface that first intrigued Ciarrocchi. She explored the creek’s footprint, witnessed the water’s runoff. Even followed it from Yonkers to Van Cortlandt Lake, only to watch it empty into a grate. She wondered where it was going, down there in the dark.

It was then Ciarrocchi knew what to call her next project: “Mosholu.”

“My artistic matter is rooted in uncovering hidden histories,” she said. “I think of myself a little like an archeologist, digging and revealing layers of things. Hidden histories make themselves known in the contemporary landscape one way or another.”

To show hidden histories in her other work, such as 2019’s “Site: Yizkor,” Ciarrocchi used the architectural renderings of destroyed buildings, books, synagogues and the silhouettes of people to present a map that leads to a memory of the dead, “an emotional documentation of loss,” as she calls it. In a similar manner, she utilized cyanotype printmaking — a method often used for blueprints at the start of the 20th century — to photograph and illustrate Tibbett’s Creek for “Mosholu.”

Ciarrocchi was accepted into Wave Hill’s artist residency program in February, and found the old documents and resources necessary to research and detail historical accounts of the creek.

“With cyanotype, you don’t need a dark room,” Ciarrocchi explained. “You take it, expose it to the sun, then wash. When I was invited to Wave Hill, I thought it would be a perfect place to experiment with it. The process is perfect — it’s a marriage of ideas. Needing to expose the watery print to the sun to make it clear, juxtaposed with daylighting the creek. It was perfect.”

“Mosholu” aims to trace the historical trajectory of Tibbett’s Creek. Ciarrocchi created prints of its intersection with the Croton Aqueduct at a time when Kingsbridge was a section of Yonkers, called King’s Bridge. Another depicts an aerial view of Inwood and of Broadway leading into the Bronx, detailing Tibbett’s Creek and its flow into the Harlem River Canal at a time when development was trying to tuck the creek away.

“These drawings were created, and I zoomed into them,” Ciarrocchi said. “They’re maps, they show where the water used to flow and how that changed. I wanted to document in this particular way how the landscape had been redesigned and shifted to hide this creek away, yet it refused to be forgotten.”

Ciarrocchi managed to complete eight prints and four more drafts of the entire “Mosholu” project before receiving some less than exciting news. Wave Hill was closing its doors due to COVID-19, the disease caused by the SARS-CoV-2 virus, which was rapidly encroaching upon the everyday lives of residents. On a March Wednesday, Ciarrocchi packed her stuff and went home.

“It was tremendously discouraging,” Ciarrocchi said. “I’d been getting pretty far along with it. I, like everybody else, just have to get by and get on the other side of this thing.”

Numerous events, exhibitions and residencies have been postponed for Ciarrocchi. Presentations for “Site: Yizkor” that she hoped to produce are no longer occurring. Even framing for “Mosholu” is harder to complete in an apartment than a studio with expansive grounds, which are now full of the presence of absence.

But, like the creek, Ciarrocchi refuses to let her work be buried.

“I sort of feel like everything is on hold,” Ciarrocchi said. “To be on a roll with something and have it stop is not great. But I’m just going to get it done. I have the time.”