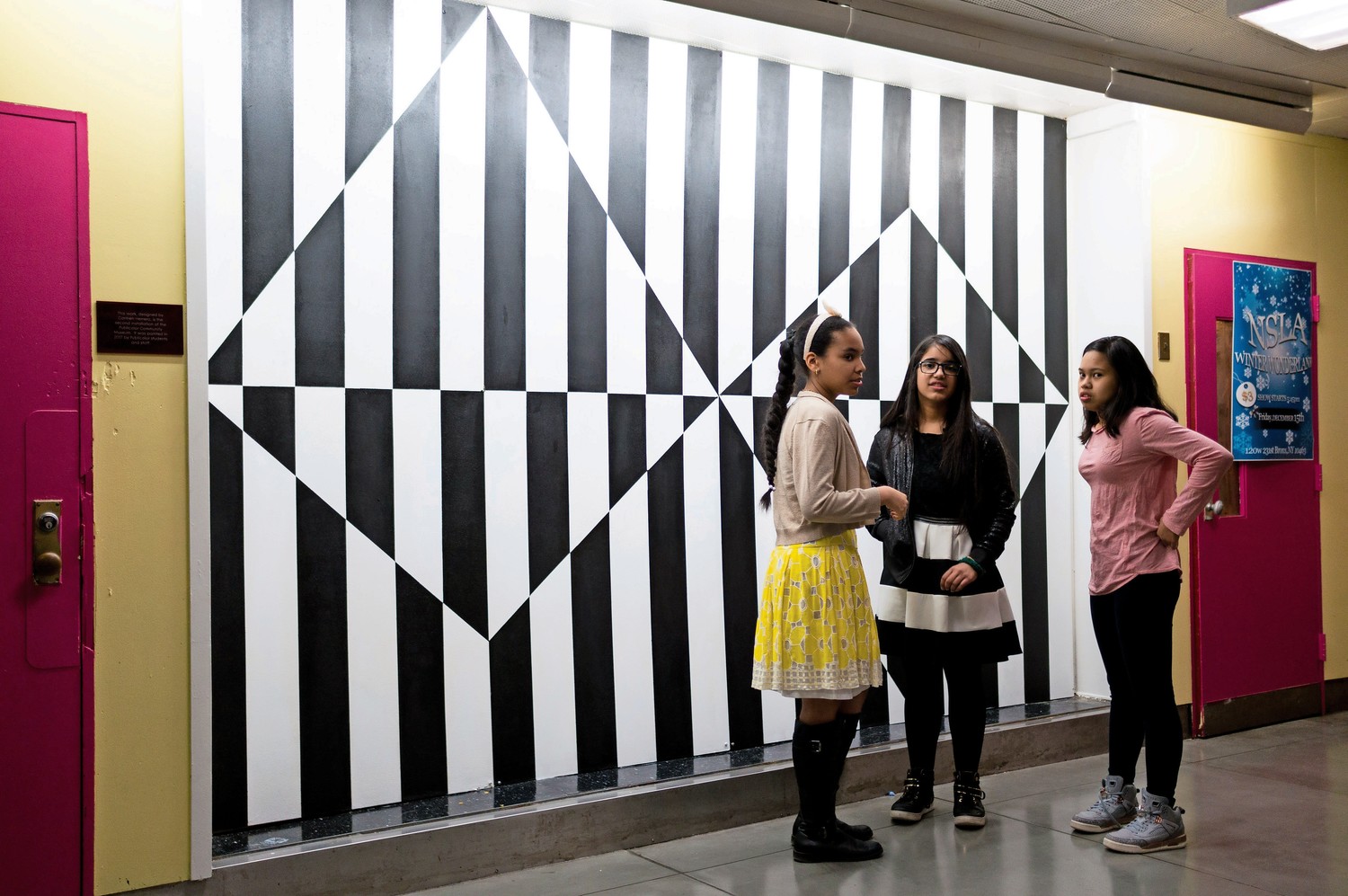 M.S. 244 students Mariam Alberto, Sherlyn Munez and Sily Netapongot talk in front of a reproduction of a painting by Carmen Herrera. They worked with other classmates and the organization Publicolor to bring the painting to life.
JULIUS CONTANTINE MOTAL 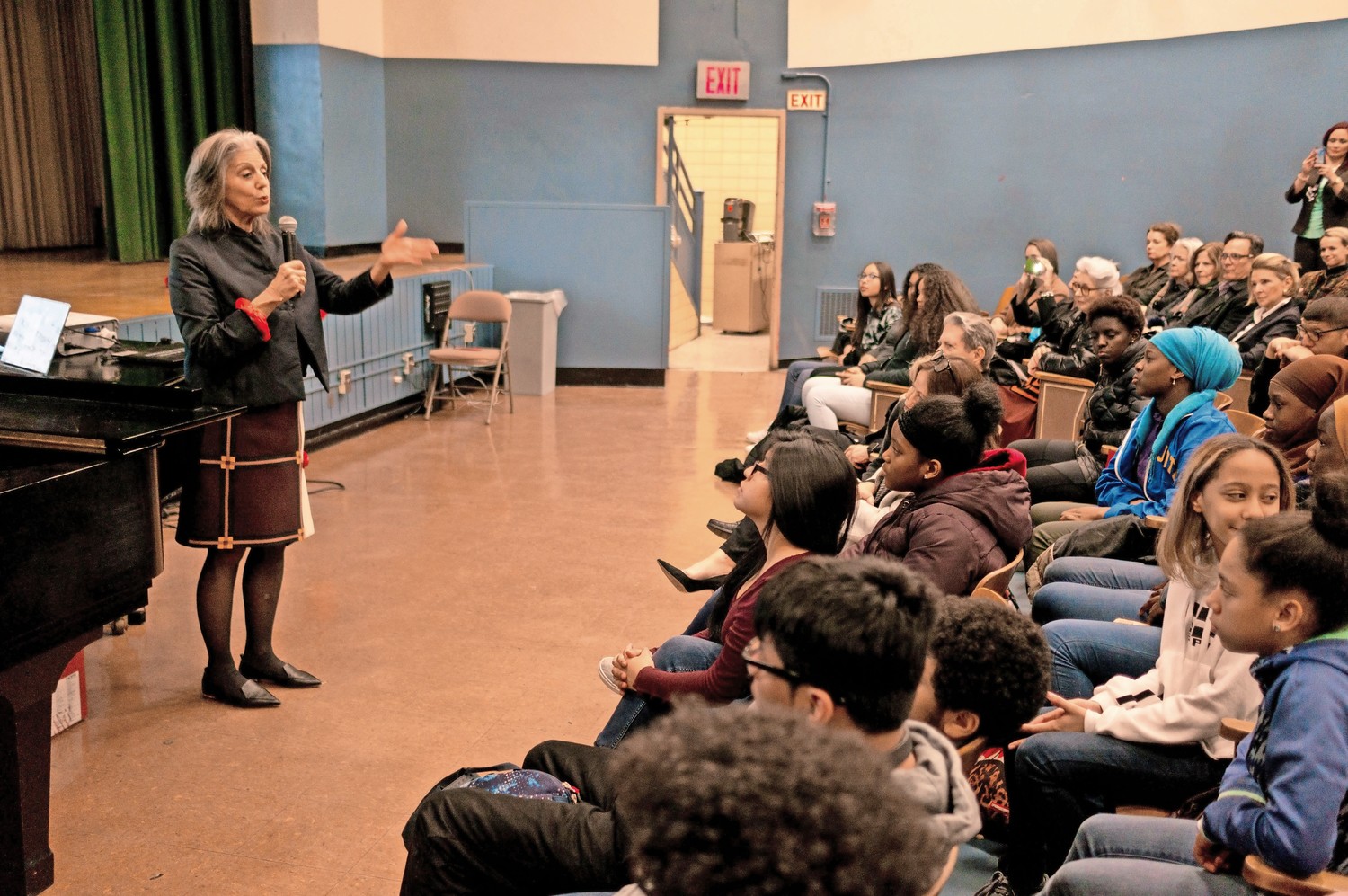 Ruth Lande Shuman, the founder of Publicolor, talks to students and faculty at M.S. 244 about the work of Carmen Herrera, a 102-year-old Cuban artist.
JULIUS CONTANTINE MOTAL 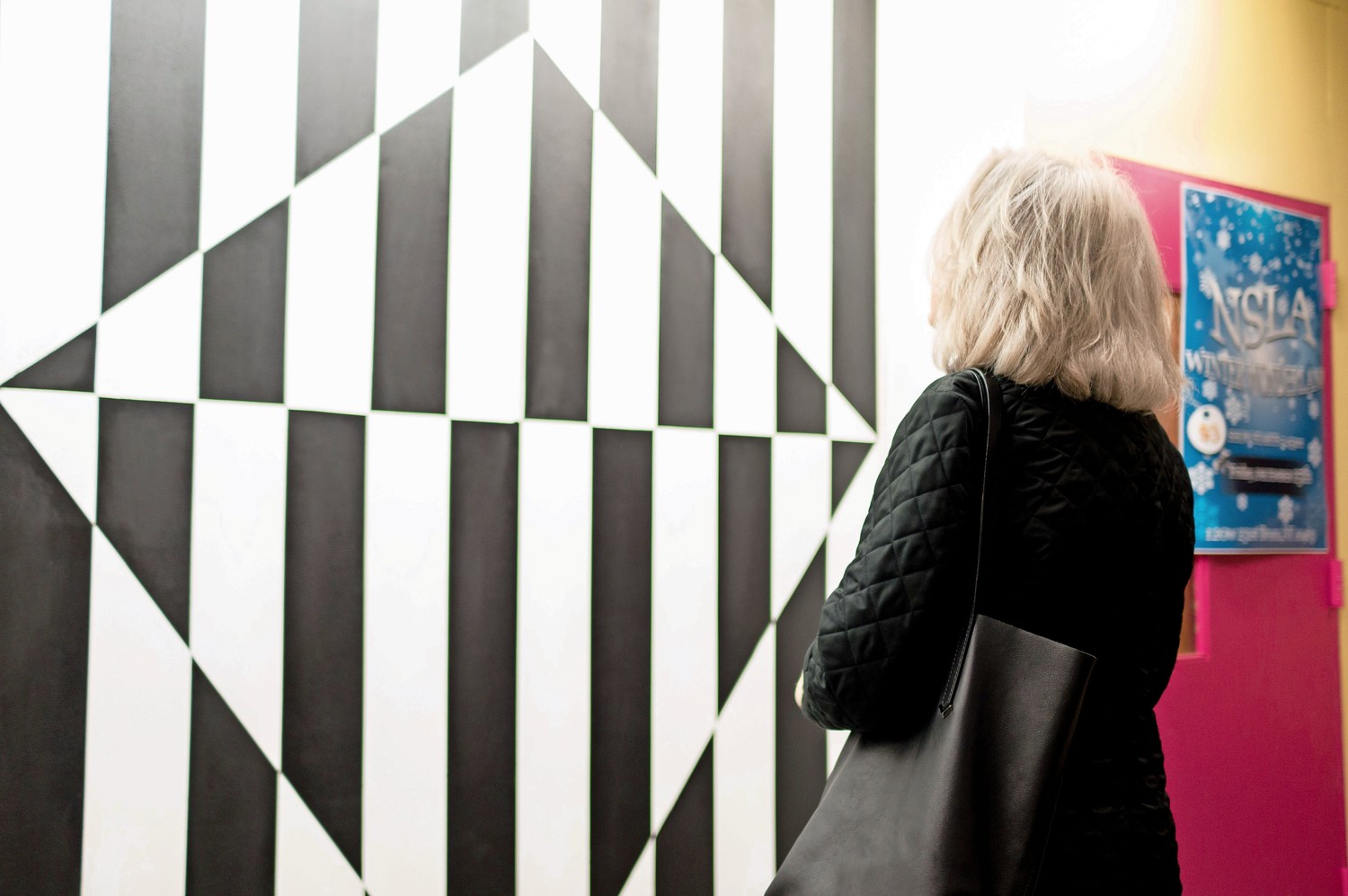 An attendee looks at a reproduction of a painting by Carmen Herrera. Students at M.S. 244 worked with the organization Publicolor to adapt a painting by Herrera for a wall-sized mural at the school.
JULIUS CONTANTINE MOTAL 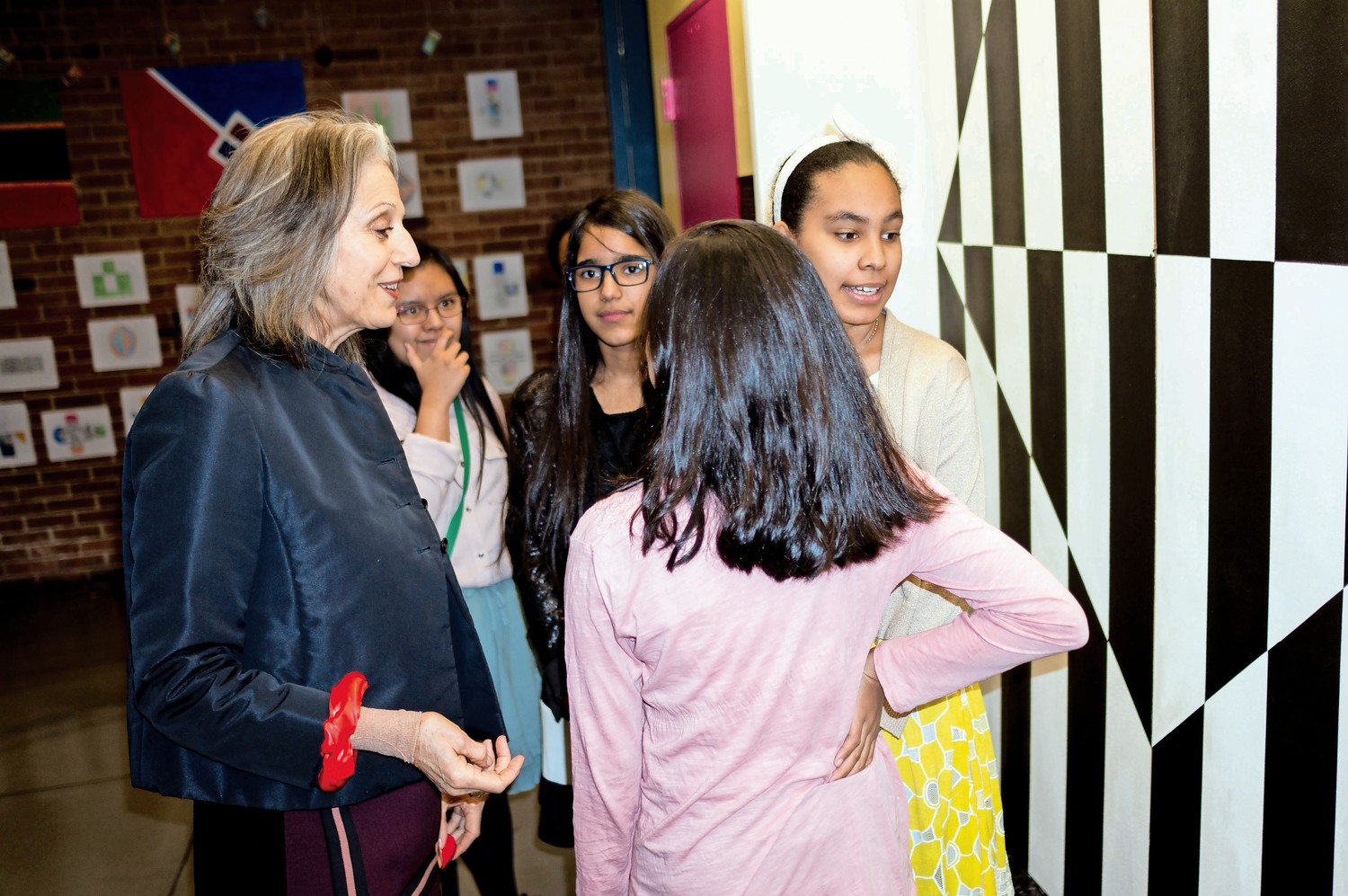 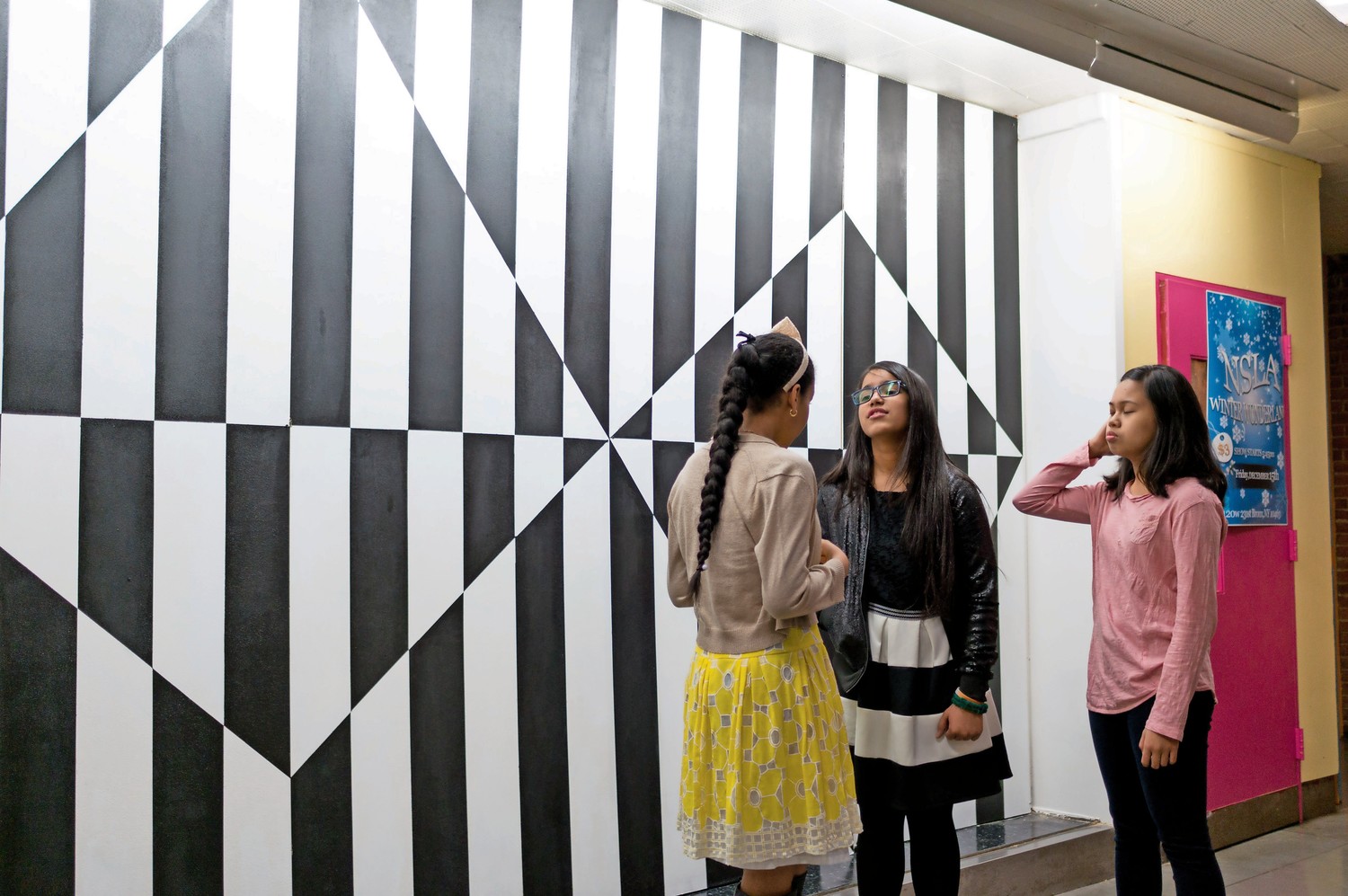 M.S. 244 students Mariam Alberto, Sherlyn Munez and Sily Netapongot talk in front of a reproduction of a painting by Carmen Herrera. They worked with other classmates and the organization Publicolor to bring the painting to life.
JULIUS CONTANTINE MOTAL
Previous Next
By SIMONE JOHNSON

Carmen Herrera is 102 years old, yet age doesn’t stop her — or her paintings — from reaching young minds.

In fact, Herrera’s art has made its way to the New School for Leadership and the Arts on West 231st Street in the form of a new mural. Inspired by the Cuban artist, the students recreated one of her new minimalistic pieces right outside the M.S. 244’s auditorium.

That made Leadership and the Arts the only school in the world with a permanent display of Herrera’s work.

“You don’t realize how hard it is and how much work goes into it,” said Mariam Alberto, and eighth-grader at the school, who helped with the mural.

Yet, the young teens did get some help from a city nonprofit, Publicolor. Founded in 1996, the youth development program transforms schools through the help of a paintbrush — changing 400 schools throughout New York City already.

It also gives kids something to do on Saturdays, letting them meet at school and learn from professional artists.

“They helped me with my painting and stuff, because sometimes when I was a little kid, I used to paint sloppy,” said Silyne Tapongot, a seventh-grader at the school. “But ever since I came to this program, I learned how to paint neater, and I appreciate the opportunity.”

By the time she moved permanently to New York in the 1950s, she had already mastered her minimalist method. But it wasn’t until the early 2000s — when she turned 89 — that Herrera would sell her first painting.

She was not the kind of woman who painted flowers and birds. During her life, Herrera studied architecture, something completely unheard of for women in the 1930s. However, she used her knowledge for her paintings and three-dimensional art, which were mathematically defined and straightforward.

Alberto used actual measurements when it came to recreating Herrera’s piece for the school.

“Carmen was a woman ahead of her time,” said Ruth Lande Shuman, founder of Publicolor.

Surrounding the large black-and-white mural are smaller pieces hanging from the ceiling and taped to the walls. The young teens transformed the school hallway into a museum of abstract and minimalist art.

Some of the students took their own spin on Herrera’s work by creating designs on paper cubes. They also added their own style by using a rainbow of colors, which is not usually expected in the classic Herrera style.

The students’ love for art doesn’t stop at just painting full-scale murals. Publicolor and Herrera have sparked interest in other realms of creative design as well. Enthused by “Tom and Jerry” and anime, both Tapongot and Alberto dream of working in animation and cartoon design.

When Sherlyn Nuñez grows up, the eighth-grader wants to be an actress. Yet, she still wants to work in fine arts because it will allow her “passion to be with my career.”

Herrera didn’t make it to the recent unveiling of the mural, but if the students did get a chance to meet the artist, they do have some questions.

“Why does she do simple art work?” Alberto asked. “Is it difficult working in an abstract form?” Nuñez added.

Today Herrera is wheelchair-bound and arthritic. When it comes to painting and creating her sculptures, she does require a bit of help. However, her art lives on in the halls of M.S. 244, inspiring the young artists who make their way through the hall.

CORRECTION: Artist Carmen Herrera, whose work inspired a mural at M.S. 244 on West 231st Street, permanently moved to the United States in the 1950s. A story in the March 29 edition incorrectly stated she moved out of her home country during that time period. While she did maintain separate homes in the United States and France, she moved from Cuba in 1939.