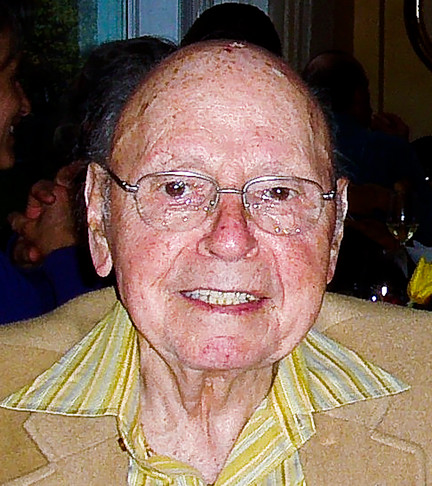 Longtime Riverdalian Murry Lewin died in his sleep on Nov. 22 after celebrating Thanksgiving with his wife, children and grandchildren. He was 101.

He was born on April 19, 1911 in Frankfurt-Am-Main, Germany and grew up in Mannheim, Germany until 1938, when his family was deported by the Nazis to a Polish town just over the German border. It was there that he met Fay, from Stuttgart, Germany. In 1939, Murry found his way to Palestine and joined a Jewish unit of the Royal Engineer Corps of the British Army. He served seven years, fighting during World War II in North Africa, including Egypt and Libya, as well as Greece, and was part of General Montgomery’s troops in the battles with General Rommel.

Mr. Lewin’s proudest moment was at the end of World War II, while stationed in Italy, when his unit participated in the transport of displaced Jews onto boats headed to Palestine, according to his family. Throughout this time period, Mr. Lerwin kept in contact with Fay. They were married in Italy in July 1946, and Mr. Lewin joined her in New York in 1947.

Mr. Lewin was self-employed, working well into his 70s. He enjoyed spending time with his family, traveling, swimming, investing, passionately discussing politics and watching the Mets. Mr. and Mrs. Lewin were longtime members of the Conservative Synagogue Adath Israel of Riverdale. He was active all his life, driving until this past summer and lived to see all his grandchildren get bar/bat mitzvahed, including his youngest, David, this past May.

From 1983 to 2003, the couple enjoyed their winters in Florida. In recent years, when asked how he was doing, family members recalled him saying, “Still kicking!” or “How old do you think I am?” always enjoying the reaction to his real age.

A graveside funeral took place on Nov. 25.  Memorial contributions may be made to the Jewish National Fund.