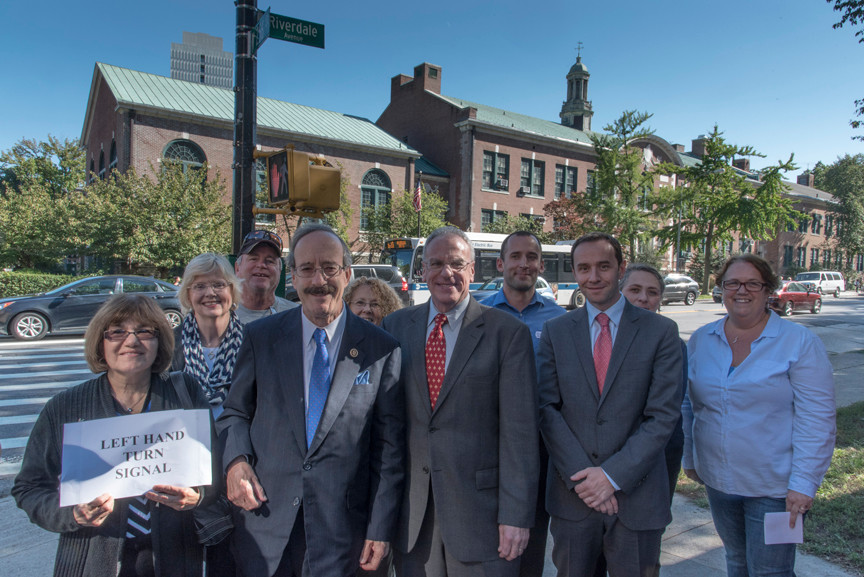 As local politicians and activists gathered near the Robert J. Christen School (P.S. 81) on Riverdale Avenue last week to call for traffic-safety improvements, a car nearly slammed into another a few yards away.

The brief interruption highlighted the concern of attendees, who were holding a news conference Thursday on the corner of W. 256th Street and Riverdale Avenue to urge the Transportation Department to install a delayed green light or a left-turn signal at the intersection. The gathering included Rep. Eliot Engel, state Assemblyman Jeffrey Dinowitz, community leaders and more than a dozen local residents.

“This intersection, according to the 50th [police] precinct, has had six accidents just this year. That’s approximately every six weeks or so,” Mr. Dinowitz said.

“When the traffic gets busy here northbound on Riverdale Avenue, sometimes you have to wait three changes of the light to make the left turn onto W. 256th Street to go west,” he said.

Shortly after he spoke, a car traveling down W. 256th Street to turn onto Riverdale Avenue and go north nearly rear-ended another.

Earlier that morning, local residents shared their concerns about what many described as a highly dangerous intersection.

“In the morning it’s chaotic,” said Nicole Davenport, as she stood on the northeast sidewalk of the intersection early in the morning, waiting for her son’s school bus to pick him up. Her son graduated from P.S. 81 earlier this year.

“They definitely need to consider putting another light or whatever they can do to control the traffic,” she said.

Another parent, Paul Angelini, who was dropping off his son at P.S. 81 for the day, said “it’s a very dangerous intersection.”

“It’s nice to have a crossing guard, but I think having a left turn signal will help mediate some of the issues on that intersection with all of the traffic,” he said.

“This time of day, between 8 o’clock and 9:30, the traffic here is horrible. It’s very bad,” said Ms. Chughtai, who has lived in the area for more than 40 years. “It takes me 15 minutes almost to back out of my garage this time of day.”

Barbara Connolly, president of the Riverdale Gardens Tenants Association, said local residents and activists were not asking for much: “We don’t need an island. We don’t need a traffic lane taken away and a buffer lane put in,” she told The Press. “All we need is a delayed green or a left-hand turn signal.”

Community members filed a similar request in 2014, but the Transportation Department declined it. According to minutes from Community Board 8’s traffic and transportation committee meeting on May 20, 2014, two children had been struck by cars and a resident complained it could take five to seven changes of the light for a clear turn.

“The Department of Transportation hasn’t seen fit to do anything about it yet, but it seems to me to be a ‘no brainer’ to make the neighborhood safer and, frankly, make it less congested,” Mr. Dinowitz told reporters Thursday. Mr. Engel said in a statement that “cars turning left onto W. 256th Street from Riverdale Avenue are too often jumping the light in hopes of beating the southbound traffic and avoiding a prolonged wait.”

“This is very dangerous for obvious reasons, not the least of which is because hundreds of children cross that street every day to attend school at P.S. 81,” Mr. Engel said in a statement. “But simple traffic calming measures could fix the problem. A left-turn signal for northbound traffic at this intersection would go a long way toward alleviating congestion while also improving motorists and pedestrian safety.”

No timetable has been set for the Transportation Department to answer the request and, if it is approved, to make traffic changes.

“I will not give up until the DOT does something to make it safer,” Ms. Connolly said.