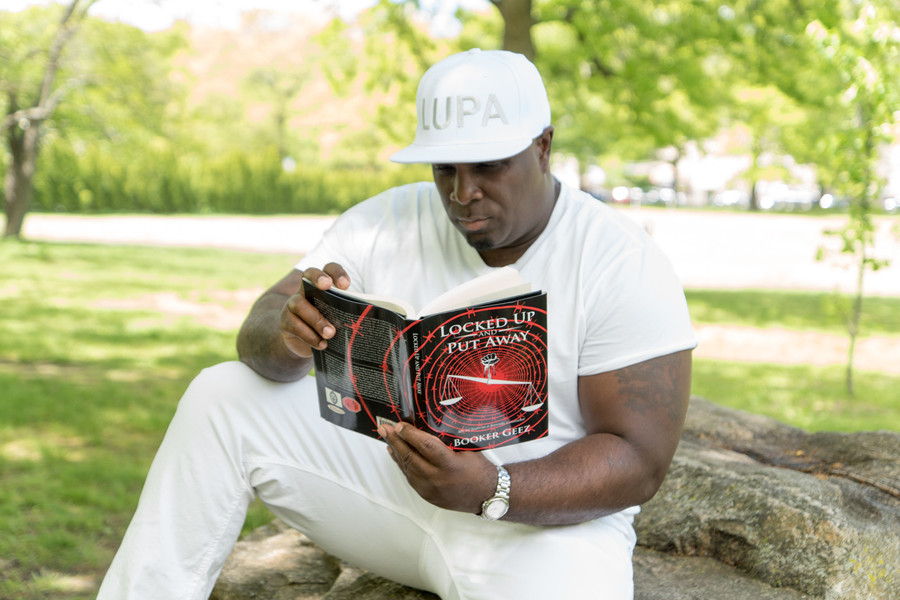 Riverdalian Booker Geez, whose real name is Erik Bishop, wrote the self-published book ‘Locked Up and Put Away’ about his 10 years as a juvenile detention facility counselor.
Julius Constantine Motal
By Lisa Herndon

Power struggles. Staff pitted against staff. And residents sometimes out of control.

In his book “Locked Up and Put Away,” author and Riverdalian Booker Geez — whose real name is Erik Bishop — discussed his 10 years as a counselor in a juvenile detention center as well as the emotional and physical toll of taking a job to provide a steady income and health benefits for his two children.

The purpose of his book, Geez said, is to educate young men of color on the misconception that jail is something that should be glorified.

“They seemed to build their reputation based on how many kids were arrested, cases they had,” he said. “Sitting at a roundtable with them, it was like a kid with the most charges got the most respect, and I didn’t understand that. What I tried to do is I tried to educate them on how the system was structured.

His job title may have been counselor, but the duties were more like being a security officer at the detention facility.

“We were being belittled, poorly managed,” Geez said. “We were being overworked, unpaid. The union didn’t help much because they were dealing with other issues.”

One time, detention center administrators blamed Geez’s colleague for a resident who suffered a seizure while being restrained. “After the incident the staff was informed about his medical condition because the resident was taken to the hospital,” Geez said.

The incident landed his colleague in court.

“The prosecutor tried to prove that the restraint caused the seizure, but the jury didn’t see it that way,” Geez said. “All charges were dropped and he was able to return to work.”

The incident, Geez said, left workers feeling unprotected by the union, and counselors with no support.

Part of the problem, Geez said, was the way the job was structured. Under the Michael Bloomberg administration, counselors were supervised by the city’s children’s services administration. When a dispute arose between counselors and residents the department would side with the children rather than give counselors and equal voice.

Geez spent some time working at the Spofford Juvenile Detention Center in Hunts Point, which was renamed the Bridges Juvenile Center before it closed in 2011. Geez would be pulled from his regular duties to work there when the detention center was short-staffed.

Geez’s own physical safety was constantly at risk. On one occasion, he almost lost a finger after a kid slammed a door. He also saw another resident throwing urine at a co-worker.

In the end, Geez did not handle the day-to-day stress of the job well. And it affected his family.

“It seemed like just (to) avoid (going) crazy in the house, I just had to kind of zoned out,” he said. “I started to feel better, and as I wrote the story, it was kind of therapeutic. I started to get back to who I was and the person that I am.”

The initial writing that would eventually become “Locked Up” began with a journal he started after leaving his job in 2015.

The writing style and tone of “Locked Up” is geared toward a younger audience, and Geez’s use of rap lyrics introduces readers to artists of color with messages of education and self-improvement.

Geez changed the names in his book to protect the privacy of his former colleagues. He even changed his own name, adopting “Booker” from African-American educator Booker T. Washington and “Geez” from the slang word “gangsta” — or “G” — a term of friendship between men of color. Geez made the surname plural, he said, so he could be a “G” for many young men.

After his career as a fashion designer failed, Geez took the detention center job to provide a steady source of income and health benefits for his children as he faced a custody battle with his now former wife. His family originally moved to Riverdale in the mid-1970s. After attending public schools here, Geez earned a bachelor’s degree from Delaware State University.

Booker Geez, Locked Up and Put Away, Lisa Herndon