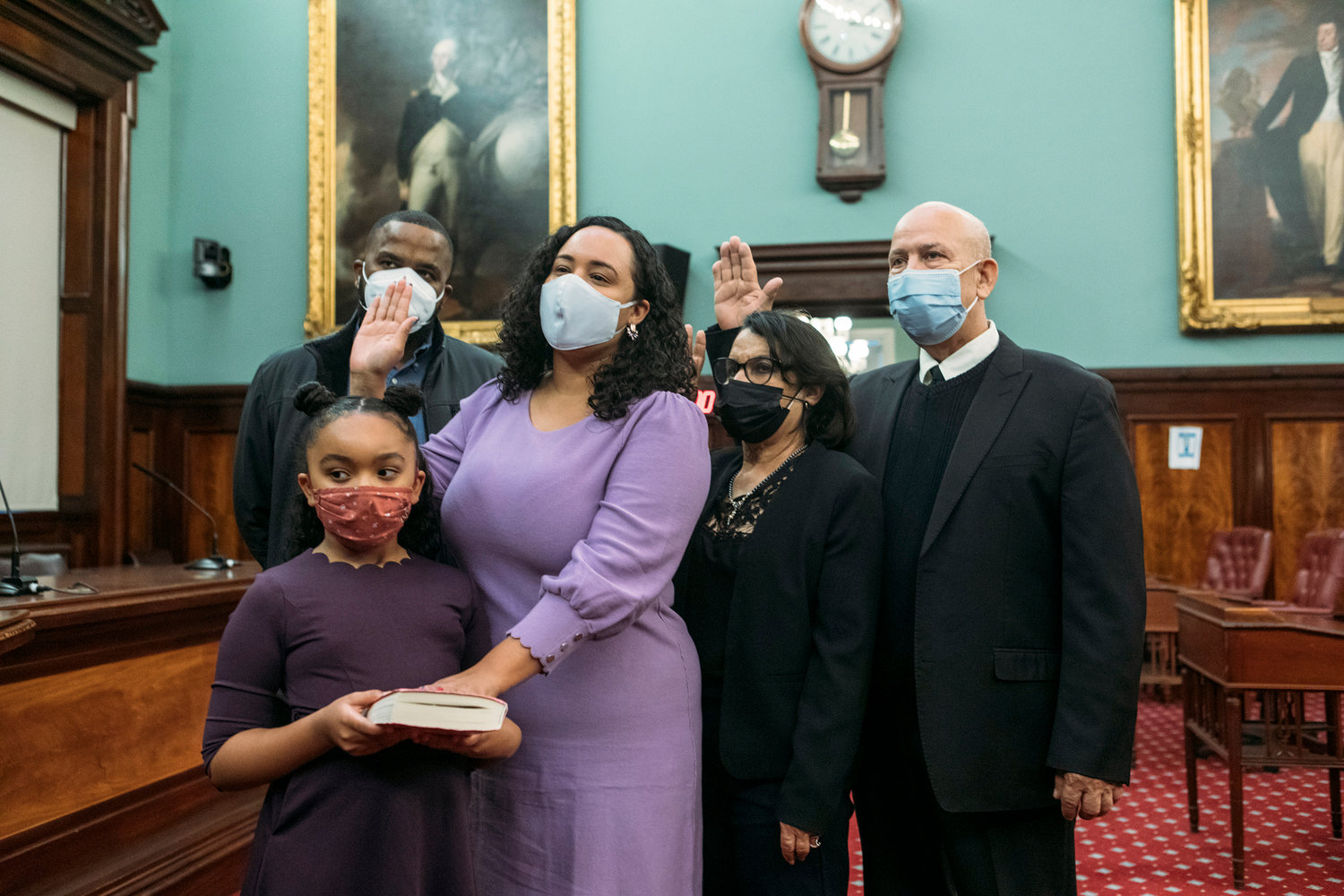 Councilwoman Carmen De La Rosa, who took over the seat long held by Ydanis Rodriguez, is sworn in. De La Rosa says her one of her top priorities as a councilwoman is making the rezoning process more transparent and responsive to the neighborhoods it affects.
Courtesy of Emil Cohen 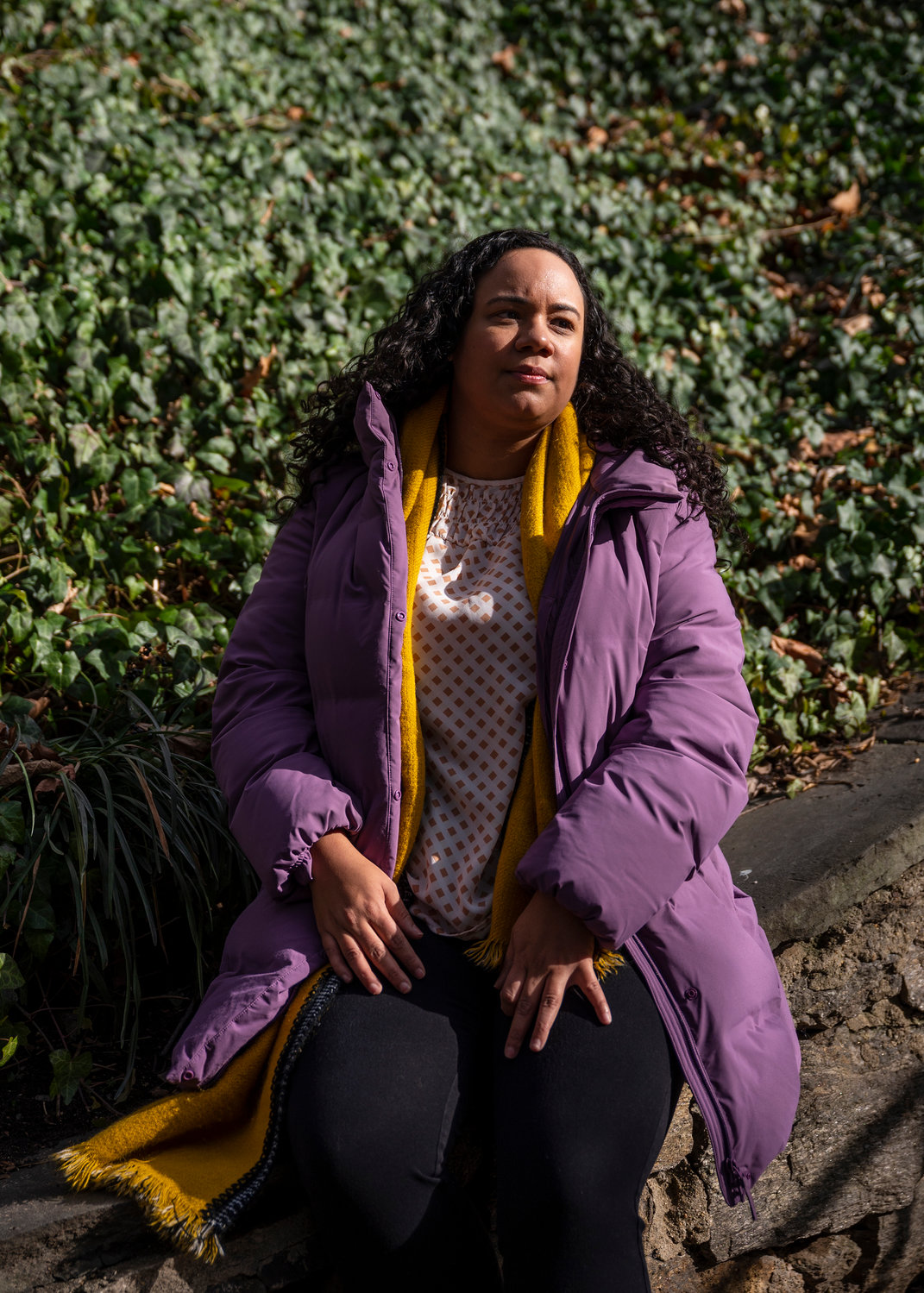 Earlier this month, Councilwoman Carmen De La Rosa took over the seat long held by Ydanis Rodriguez — representing Marble Hill and much of upper Manhattan. De La Rosa says one of her core issues is making the city more livable for its immigrant population, who are often shut out of government services.
HIRAM ALEJANDRO DURÁN 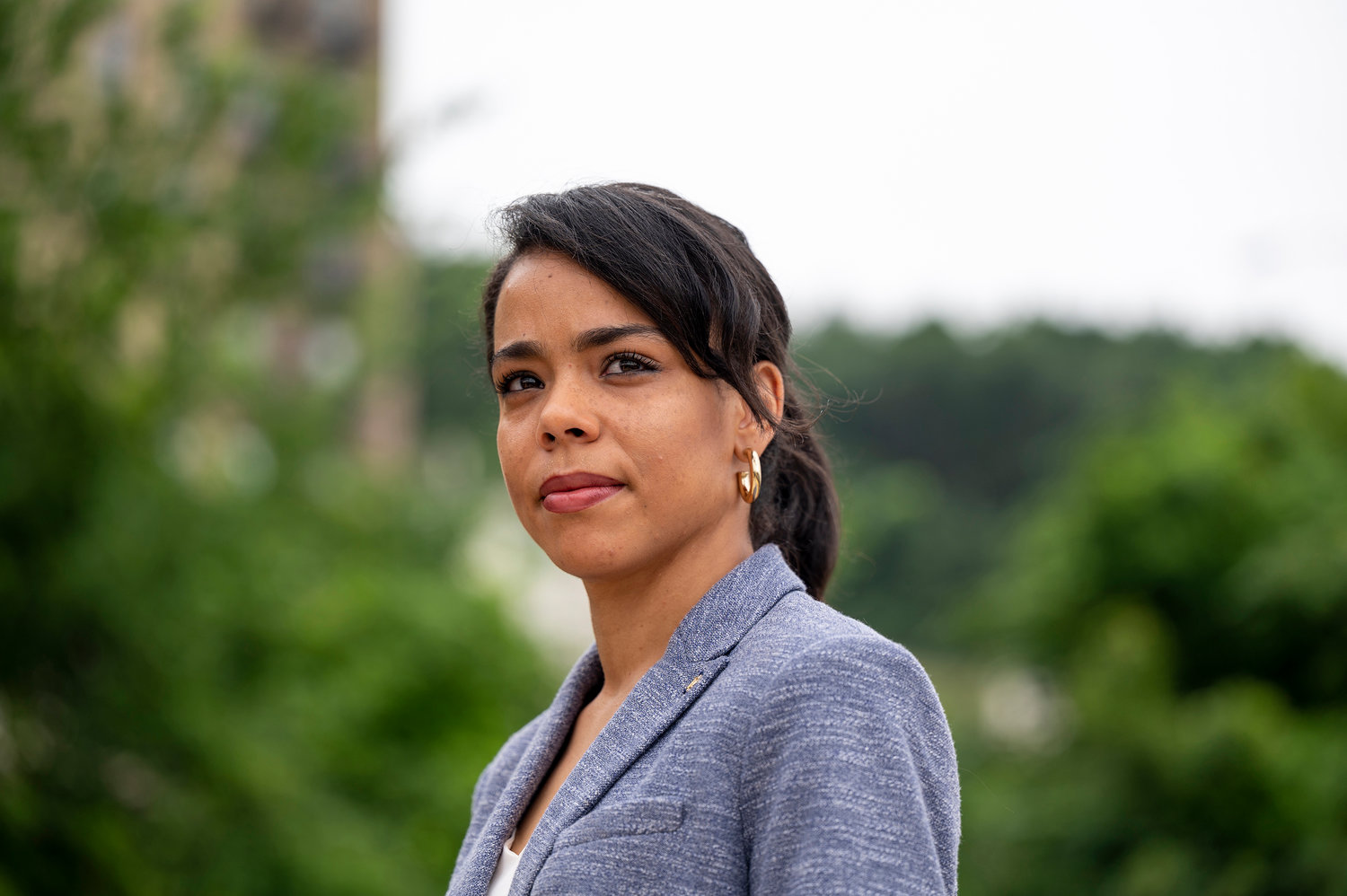 Councilwoman Pierina Sanchez was sworn in earlier this month, taking over the seat long held by Fernando Cabrera that represents part of Kingsbridge Heights. Sanchez says her top priorities include housing affordability and encouraging better voter turnout in her district.
HIRAM ALEJANDRO DURÁN/ File
Previous Next
By ETHAN STARK-MILLER

The city council made history when it elected Queens Councilwoman Adrienne Adams its new Speaker. Adams is only the third woman — and the first African American one — ever to lead the city legislative body.

For Councilwoman Carmen De La Rosa, this vote was a “momentous occasion.”

“For me, personally, it was the culmination of a long journey,” said De La Rosa, who now represents Marble Hill and upper Manhattan. “It feels like you’re running forever. And then you’re finally sitting there with all of your colleagues, and we get the opportunity to elect the first female African American Speaker of the council. And (that’s) amazing.”

Pierina Sanchez — the new councilwoman representing, in part, Kingsbridge Heights — says she was particularly struck by the moment Queens Councilwoman Selvena Brooks-Powers was the first to officially nominate Adams for the Speakership.

For De La Rosa and Sanchez — both women of color — electing Adams Speaker was their first official vote on the council. They’re part of the first-ever majority women council in the city’s history, after winning elections last year to replace long-time male incumbents.

De La Rosa takes over the seat held for the past 12 years by Ydanis Rodriguez — now the city’s transportation commissioner. But De La Rosa is no stranger to working with Rodriguez. In fact, she learned directly from the former councilman while serving as his chief of staff between 2014 and 2016.

De La Rosa also spent time in Albany as an Assemblywoman representing roughly the same section of upper Manhattan she does now. Although she appreciated her time there, she felt the state legislature’s work was often too far removed from her community. She ran for city council to be closer to the people she represents, and be more responsive to their needs.

“It’s been interesting to switch my mindset from looking at things on a macro level to now looking at it in this local way,” De La Rosa said. “It’s also been great to not have to commute to Albany and be able to sort of be the eyes and ears of our community.”

While De La Rosa is still very new to the council, she already has several ideas for legislation, tackling issues both citywide and in her district. For instance, following the controversies surrounding building projects more than three years ago Inwood, De La Rosa is interested in legislation that could make the rezoning process more transparent and accountable to the neighborhoods it affects. One way this can be done is by requiring the Uniform Land Use Review Procedure — more commonly known as ULURP — to include a racial impact study.

Another one of De La Rosa’s priorities is passing what she calls an “immigrant bill of rights.” She envisions this as a set of laws guaranteeing the immigrants certain protections from federal agencies like Immigration and Customs Enforcement.

“There are things that should not be happening in our city,” De La Rosa said. “ICE shouldn’t be coming in to divide communities and break up families. There should be places that are respected like churches and funeral homes, as sanctuary cities. So, I want to take a look at what the city has in its books to protect immigrant communities so that we can update some of those regulations.”

“It’s a disputed territory, is it the Bronx? Is it Manhattan?” she said. “And sometimes I’ve heard from residents of Marble Hill that they feel kind of left out.”

To fix this, De La Rosa’s office aims to regularly hold pop-up office hours and on-the-ground services north of the Broadway Bridge. She added she’s already trying to get more coronavirus testing sites in the area.

Sanchez — who replaced Fernando Cabrera — says her top priority as a councilwoman is tackling the lack of affordable and good quality housing in her district. That’s because housing is at the nexus of many of the district’s other issues, like high unemployment and homelessness.

“It’s a solution to so many of the different problems we face,” Sanchez said. “Because a stable home that is healthy, that doesn’t have lead, doesn’t have mold, is well insulated. All of these things can make you healthier. Can be something that provides a child, for instance, more stability as they’re going through school.”

Sanchez wants to work with Mayor Eric Adams to build affordable housing that more accurately matches the incomes of the residents it’s trying to attract.

This is something former mayor Bill de Blasio’s affordable housing plan fails at, Sanchez said, because it relies on the area median income to calculate affordability.

Some have argued the Bronx’s AMI doesn’t accurately reflect the median income for most of its neighborhoods because it also includes wealthy portions of Westchester County.

“In a district like mine — where the median income is $21,000 for a worker — something that starts at 30 percent AMI isn’t even serving us,” Sanchez said.

Another piece of the housing issue is making sure people’s homes have safe and healthy living conditions. A big part of this is thinking about how the city’s housing preservation and development department can make its code enforcement process more efficient, so they’re addressing apartments with hazardous conditions more quickly.

Sanchez also looks to tackle what she sees as a lack of civic engagement and education in her district. That’s why she wants to bring her district into the participatory budgeting process for the first time.

“Just having more situations where I can help bring that civic activity and engagement to District 14 is going to be a priority,” Sanchez said. “Because it’s just been really surprising, just the extent to which there’s a lot of disengagement in the community.”