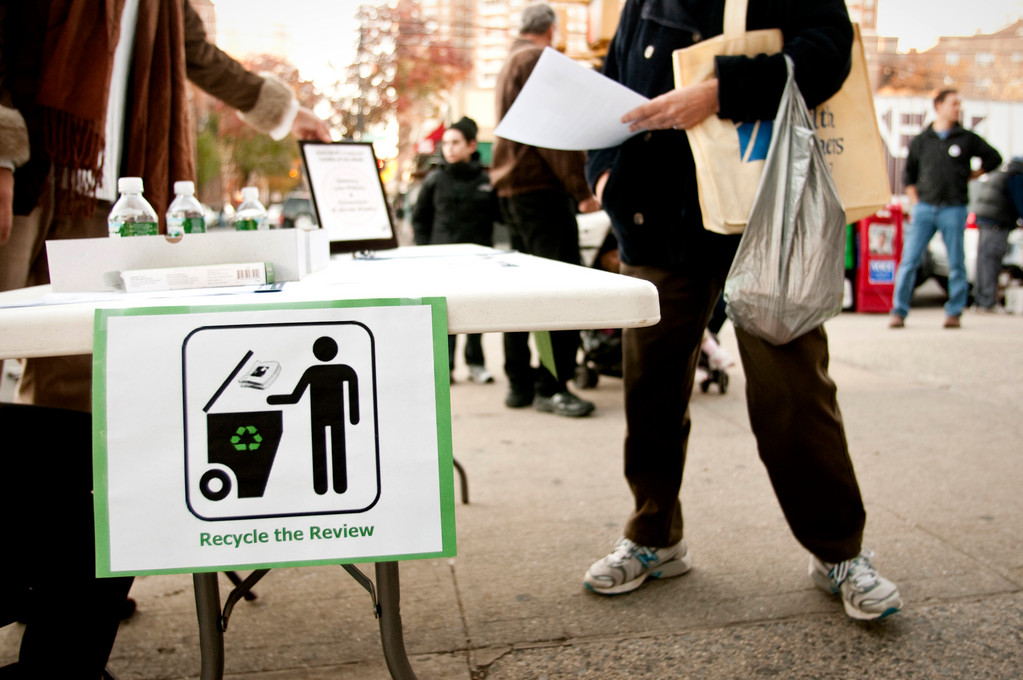 Recycle the Review event at the intersection of Johnson Ave. and West 235th St.
By Karsten/Riverdale Press
By Kate Pastor

Don’t get mad, get even, appears to be the motto of a new group dedicated to battling what it calls demeaning, distorted and negative reporting in the Riverdale Review, a tabloid dropped in street boxes and some building lobbies in the area.

The campaign ­— Recycle the Review — hopes to stymie what it characterizes as irresponsible journalism by deterring other Riverdalians from reading or advertising in the paper.

“Ever wonder about this paper?” reads the headline atop a color handout being circulated at their first event on Nov. 11. Group organizers set up tables and a blue recycling bin near a Review box on the corner of Johnson Avenue, encouraging passersby to dump their copies inside and have started a Facebook page to garner support.

The Review has been criticized in the past for biased reporting, especially on politics and schools. Recently, a number of stories attacking PS 24 and its administration have appeared on its pages. Parents, including PS 24 Parents’ Association Co-President Cliff Stanton, whose heads the new group, are among those involved in promoting the ban.

The school and the paper went head-to-head when some parents publicly voiced their disapproval of the Review’s decision to conduct surprise interviews with students on the street without parental consent. Parents asked police to get involved in the matter of reporters approaching children and Mr. Stanton published an Op-Ed piece in The Press calling for the First Amendment to be altered to better protect the young.

The article for which the interviews were conducted, headlined “It’s ‘Ding Dong School’ for P.S. 24 students,” was featured on the flier, and Trebach Realty’s Brad Trebach, a PS 24 parent, along with both PS 24 PA co-presidents, attended the first event.

In addition to coverage of PS 24, the group highlighted the papers’ disrespectful approach to other schools and issues. It quoted the paper calling former PS 7 Principal Renee Cloutier a “twit” and Councilman Oliver Koppell “the saddest of all Villains.”

Mr. Stanton said the “final straw” for him was when he attended a birthday party over the summer and met a woman hesitant to send her children to PS 24 because of stories she read in the Review. He said concerns that the Review’s negative coverage of schools and other community institutions could affect local real estate values, were “legitimate” but not the main factor spurring the boycott.

But Andy Wolf, a Riverdale resident and publisher of the 18-year-old Riverdale Review since 2000, said the political motivations of Tony Cassino, former Community Board 8 member and once-councilman hopeful, were driving the ban.

“It’s very clear that it’s a politically motivated enterprise by Tony Cassino,” Mr. Wolf said. “He doesn’t want us getting in the way of his finally achieving public office.”

Mr. Cassino denied rumors that he was behind the effort, though he readily admitted to supporting the group. Long politically active — he is a founder of the Northwest Bronx Democratic Alliance and sits on the City’s Charter Revision Commission — he has previously complained of being maligned in the paper’s news and editorial pages. He was handing out Recycle the Review literature in Seton Park on Saturday. Others stood outside of Starbucks on Sunday.

Mr. Cassino operates the Bronx Political Chatter blog, which contains harsh criticisms of the Review and the paper’s reporters written by Mr. Cassino and mostly anonymous commentators. But he said a newspaper carries different expectations.

“People assume when they read a story that it’s been well-sourced and that it’s based on fact and that it’s objective,” Mr. Cassino said of the latter.
Mr. Wolf said he does not attack individuals, but calls leaders out for misdeeds and does not expect the ban to hurt his paper.

“This isn’t the first time,” he said, noting that parents of what was formerly called JHS 141 once made a similar effort.

He said the group encouraging people to remove the Review from their boxes is “to my mind no different than a book burner.”

“People are instinctively opposed to efforts to suppress the free exchange of ideas,” he said. “We have freedom of the press in this country.”

One passerby at the Nov. 11 event, agreed.

“I think it’s outrageous, there’s something in this country called freedom of the press,” Selma Samuel said, as others — more than 300 people by Monday night, according to Mr. Stanton — signed the petition.