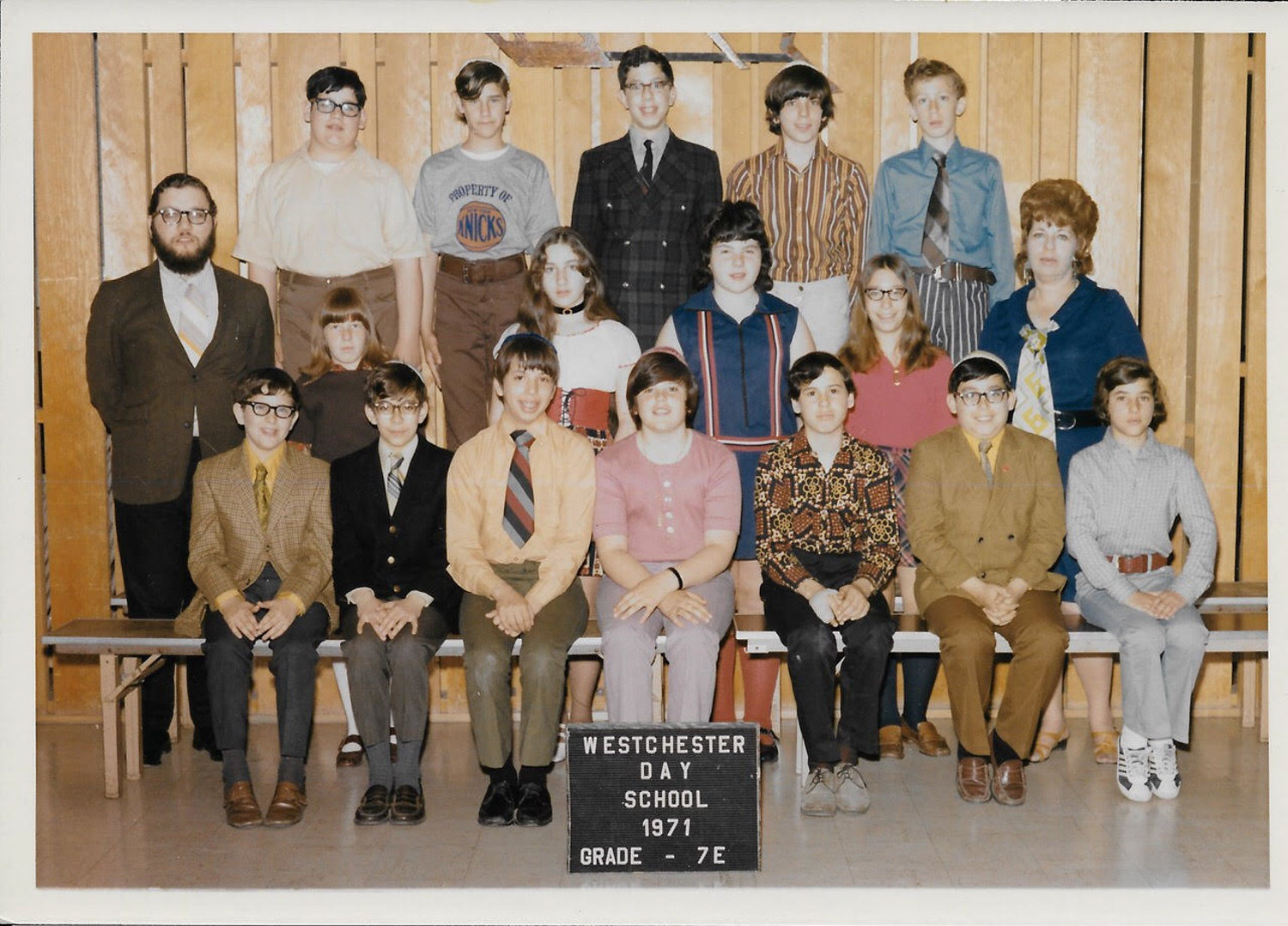 A 1971 photograph shows the seventh grade class at Westchester Day School where Michael Rabin, second from right in the top row, was a student. Rabin sought help from teachers and administrators after his claims he was molested by Stanley Rosenfeld, a teacher at the school who also taught at Salanter Akiba Riverdale Academy. Rosenfeld pleaded no contest to two counts of second-degree child molestation in 2001. Since the passage of the Child Victims Act, three people have filed civil suits against SAR.
File photo courtesy of Michael R
By HEATHER J. SMITH

It began with the report of decades-old child sexual abuse. It led to a private investigation. Now, former students of Salanter Akiba Riverdale Academy are suing the Modern Orthodox Jewish school for unspecified damages under the newly enacted Child Victims Act.

Three people filed in Bronx Supreme Court earlier this month, alleging the West 254th Street school knew of and allowed years of child abuse by former administrator and teacher Stanley Rosenfeld. He was prosecuted for child sexual abuse in Rhode Island in 2000, but the multiple allegations of abuse committed while he worked at SAR Academy and other Jewish schools were never subject to a criminal investigation.

Rosenfeld served as assistant principal of general studies for three years beginning in 1974. After an abrupt dismissal during the 1977 academic year, the school rehired him as a teacher in 1986-1987. Even after he left the school the first time a decade before, he was still allowed on campus to participate in student activities.

Passage of the Child Victims Act — championed by state Sen. Alessandra Biaggi, who is also a child sexual abuse survivor — extended the statute of limitations from a maximum age of 24 to 55. Beginning in August, the state opened a one-year “look back” period, allowing adult victims to file civil claims for abuse that already had expired under the old statute of limitations.

The plaintiffs allege SAR administrators allowed and encouraged Shabbat sleepovers at Rosenfeld’s apartment even after he was dismissed from his position at the school. One plaintiff stated he was 12 in 1980 when former SAR faculty member Rabbi Sheldon Schwartz first took him to Rosenfeld’s apartment for a sleepover. The complaint went on to state that Schwartz told the plaintiff to sleep in Rosenfeld’s room, and after the plaintiff began screaming and crying after he alleged Rosenfeld assaulted him, he claimed Schwartz tried to convince him it was “only a dream.”

Allegations of sexual abuse are not a new subject for Rosenfeld or SAR Academy. Michael Rabin, a former student of Westchester Day School in Mamaroneck, came forward last summer with allegations Rosenfeld abused him when he taught there in the early ‘70s. Ramaz School in Manhattan admitted last year its faculty did not address evidence Rosenfeld allegedly abused students during his tenure there. He left the school for SAR in 1974.

The firm’s report painted a disturbing picture of an alleged sexual predator who groomed students and sexually abused them during regular Friday sleepovers. It contained several alleged instances where former students described waking during the night to find Rosenfeld fondling them or other students. Some told private investigators they felt dizzy or groggy during the abuse, as if maybe they were drugged.

The report also revealed abuse happened on campus. Alleged victims described Rosenfeld touching their privates in his office, or him pressing himself against them after cornering them in common areas of the school.

The report also alleged that students reported abuse to Schwartz — who was fired last year following T&M’s investigation, after 45 years at SAR. Those interviewed by investigators said Schwartz dismissed their reports as a misunderstanding. Some interviewees also accused Schwartz himself of inappropriate physical contact with students.

Rosenfeld told investigators he touched students “whenever (he) worked with them.” When asked if any faculty members knew he was abusing students, Rosenfeld reportedly said, “I don’t know if they knew or not. Sometimes it was very possible to see me do that because I wasn’t hiding that.”

Investigators spoke to a former school administrator was said former SAR Academy principal Sheldon Chwat stated Rosenfeld was “let go or leaving” in 1977. The rabbi allegedly said Rosenfeld was “the kind of person that has a proclivity or interest in students,” and “not the person who should be with kids full-time,” according to the report.

In total, the investigation found evidence Rosenfeld allegedly abused 12 SAR students, but heard accounts that suggested there were possibly many more.

“It’s astounding that he was able to do it, you know?” Michael Dowd, attorney for the plaintiffs, said. “He moved between the Jewish schools, doing this to these kids. If only they’d done something, it could have spared many shattered lives.”

Rosenfeld’s behavior was not reported to the school community or the authorities, Dowd said. He went on to work in public schools, then later as a cantor and bar mitzvah tutor in a Warwick, Rhode Island, temple.

It was there authorities said he abused a 12-year-old. He was charged, convicted and was given a 10-year suspended sentence. After violating probation, he served 18 months in prison after initiating contact with a child. He is now 85 and lives in an assisted living facility in Providence, according to reports.

Based on T&M’s investigation and the plaintiff’s statements, Dowd said it’s clear school administrators knew Rosenfeld was a sexual predator, but chose to protect him rather than protect students.

Calls and emails to SAR executive director Debra May requesting comment were not returned.

“Institutions … stand in the place of parents when taking care of kids as educators,” Dowd said. “They had an institutional duty that they failed miserably to do what they were required to do, and that is to protect the children.”

His clients want the closure that is finally available to them under the Child Victims Act after years of emotional trauma — the same closure more than 200 people he’s representing seek through the new law.

Although the lawsuits are seeking a monetary penalty for the abuse, no amount of money can reverse damage done, he said. While Rosenfeld and other faculty members who may have covered up the abuse are no longer at SAR, Dowd said time does not absolve gross negligence.

Nor are schools like SAR guaranteed to prevent child sex abuse and report it to police when it’s discovered, even after large-scale abuse.

“They must understand that if you don’t do your job, you’re going to literally pay a price for it,” Dowd said. “If we have the capacity in a civil case to do something other than that — or in addition to that — we would. But we don’t.”