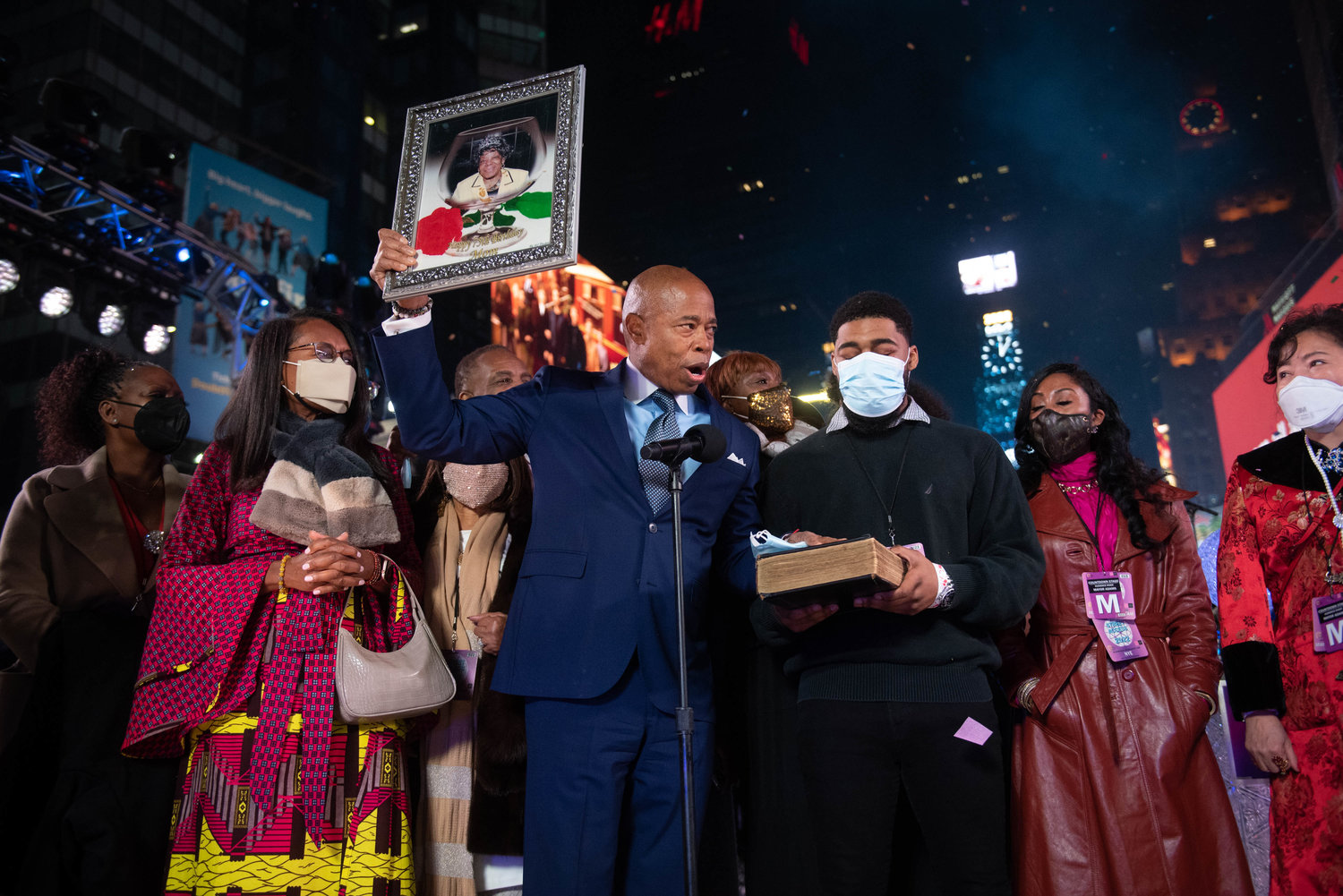 With a nod to the omicron variant of the coronavirus, a much smaller crowd greeted the new year in Times Square late Friday night. But after the countdown, and just after Bill de Blasio danced the evening away with his wife to the sounds of Frank Sinatra's "New York, New York," that very same New York welcomed new mayor Eric Adams.

He raised his right hand — which was holding a large framed photograph of his late mother — and repeated the oath of office from appellate court associate justice Sylvia Hinds-Radix just minutes into 2022, officially making Eric Adams the 110th mayor of New York City. And only its second Black mayor, after the late David Dinkins.

Adams had scrapped his inauguration plans, and instead decided to make his swearing in part of the annual Times Square festivities. He didn't address the crowd or the cameras after officially becoming mayor, but later told Ryan Seacrest on ABC's New Year's Eve broadcast he planned to wake up early Saturday to get started.

Adams was, until midnight, the Brooklyn borough president, a role that now belongs to former councilman Antonio Reynoso. In fact, all the boroughs except Queens welcomed new presidents at midnight, including former councilwoman Vanessa Gibson succeeding Ruben Diaz Jr., in the Bronx.

Adams grew up in South Jamaica, one of six children raised by a single mother. He was beaten by police officers when he was just 15, but used that experience as a rally cry to change the New York Police Department — by joining it.

He rose to the rank of captain before making his way into politics. He was elected to the state senate in 2007 — a seat he would hold until running unopposed for Brooklyn borough president in 2013.

Adams has inherited a significant workload from de Blasio — although much of that was completely out of his predecessor's hands. Despite a nearly 80 percent vaccination rate in the city, new infections have reached record highs, and there are some fears the city could be forced into another lockdown similar to what happened at the start of the coronavirus pandemic in 2020.

However, hospitalizations have not risen at the same rate, and based on comments made during the election as well as his time as mayor-elect, Adams has indicated no plans to deviate much from the pandemic policies already put in place by de Blasio, including vaccine mandates for public venues and work places.

Adams fought a tough race against a number of Democratic primary opponents last summer, with former sanitation commissioner Kathryn Garcia giving him a run for his money through the city's new ranked-choice voting system. He then handedly defeated Republican Curtis Sliwa in the general election.

"Happy New Year, New York," Adams tweeted following the swearing-in. "I'm so excited about the future of the greatest city in the world, and humbled to be your mayor. Tonight, let's (safely) celebrate. Tomorrow, the work begins."