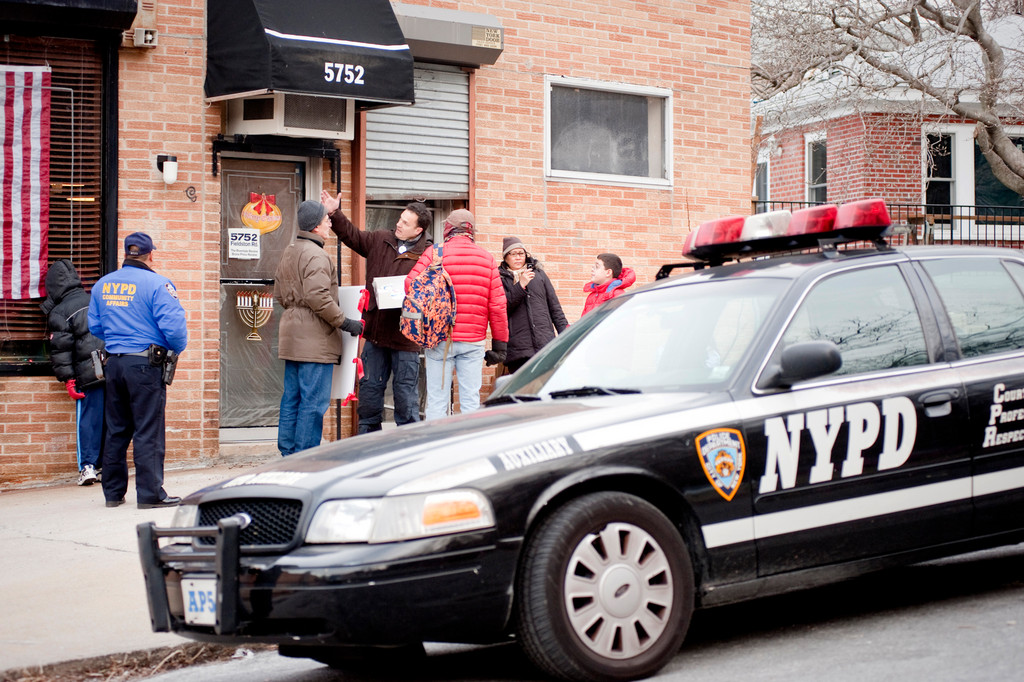 Members of "Recycle the Review" bring a "Happy Birthday 1st Amendment" cake and card to the Fieldston Rd. offices of the Riverdale Review on Dec. 16.
Karsten Moran / The Riverdale Press
By Nikki Dowling

Seemingly oblivious to the freezing temperatures and cold wind whipping down Fieldston Road, Cliff Stanton and six others resolutely gathered in front of the offices of the Riverdale Review, a free weekly tabloid that purports to have a circulation of 20,000.

Mr. Stanton held a large white birthday cake decorated with an American flag and the words “Happy Birthday 1st Amendment.” Another attendee lugged an oversized card, signed by about 50 members of the community, to celebrate the First Amendment’s 219th birthday.

The demonstration on Dec. 16 was orchestrated by Recycle the Review, a movement that began last month with mostly PS 24 parents and now boasts hundreds of followers encouraging advertisers and readers to boycott a publication that they see as a negative force in the community.

So far, Mr. Stanton said more than 600 people have signed on to the boycott. The group, run by 40 to 50 Riverdalians and funded out of organizers’ pockets and with donations, has put out two newsletters highlighting a history of what they deem to be irresponsible journalism and mean-spirited editorials by Review publisher and editor Andy Wolf.

Encouraging people to toss the Review didn’t sit too well with Mr. Wolf, who promptly cried foul in the name of the First Amendment.

In response, Recycle the Review members declared their love for the more than 200-year-old constitutional amendment by celebrating its birthday and, in the end, brought the party to Mr. Wolf’s front door. Three police officers stood by to make sure things didn’t get out of hand. But Mr. Wolf didn’t answer and, after knocking three times, the group left with more cake for them.

In a phone interview Mr. Wolf told The Press he doesn’t care what Recycle the Review does and said it has not affected business.

“We haven’t lost a single advertiser and, in fact, we’ve had a number of people who are signing on because they’re so repulsed by this,” Mr. Wolf said. “Censorship doesn’t sit well with the people in this community.”

Mr. Wolf refused to divulge which advertisers have signed on since the Recycle the Review boycott began.