No solution to stuck trucks 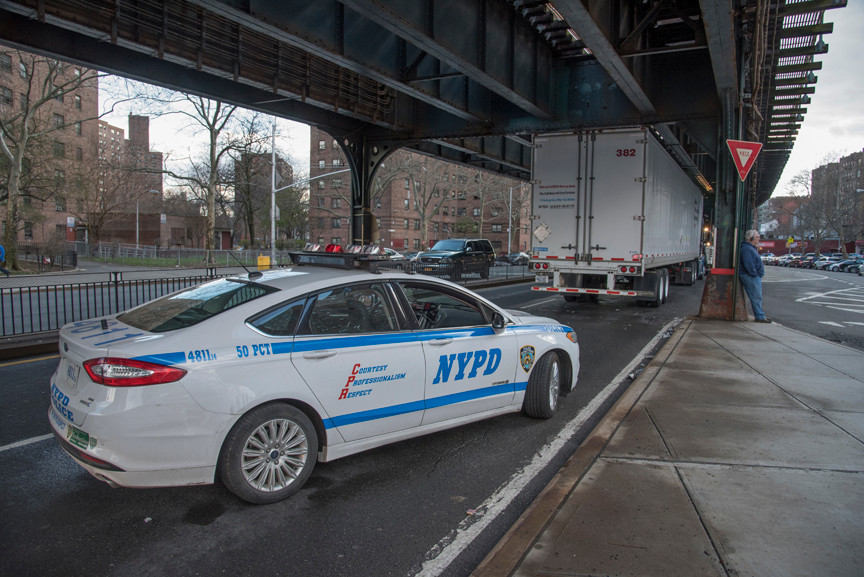 Last week, people traveling down Broadway at rush hour found themselves in a familiar situation: a semi truck had gotten stuck under the elevated tracks of the no. 1 Train.

Police diverted traffic around the vehicle and buses struggled to make their way around the incapacitated vehicle.

The March 28 incident happened at Broadway and West 230th Street, but as Tony Leheld can attest, trucks get stuck all along Broadway.

Mr. Leheld drives a livery cab for All Town in Kingsbridge and Riverdale, which means he spends a lot of his time waiting in the taxi line on West 231st Street and Broadway. And he said he notices at least one jammed truck at least once month.

“A lot of trucks have been stuck here,” he said earlier this month, gesturing toward the intersection. “It can take hours to clear up the whole thing.”

In 1993, the city’s Department of Transportation proposed a somewhat radical idea: lower the street level under the elevated track by about two feet.

Michael Heller, the chairman of Community Board 8’s Traffic and Transportation Committee, remembers the plan.

“The merchants were against it. They said it would disrupt business,” he recalled in a phone interview earlier this month.

Community Board (CB) 8 also came out against the city’s proposal, according to an article in The New York Times from November 1993, effectively killing the idea.

“When [the elevated platform] was built in the 1890s, trucks were not a problem, I imagine. They had literally just been invented,” Mr. Heller.

He added that now, truck drivers just have to be aware of the signs posted all along Broadway that clearly mark the height limit and they need to know the height of their current vehicle.

Kate Moe is the safety director for Airline Transportation Specialists. It was one of her company’s trucks that got stuck on Broadway last week.

Ms. Moe said that about half of the company’s drivers refuse to drive through in New York City precisely because they do not want to get stuck under elevated train tracks — no small number for a company whose fleet comprises about 50 vehicles.

“Of course, we wish the city would do something about it, but we know that’s an awful hard thing to try to request,” she said. “I don’t think it’s something the city can fix.”

She added that the company and drivers need to stay vigilant about the posted height limits, but perhaps the city could slightly lower the street the next time it resurfaces the road.

“One inch makes all the difference,” Ms. Moe said.

Mr. Leheld, the livery driver, suggested that repaving the street could add height over the years. But Mr. Heller said while that might have been the case many years ago, these days the milling process ensures that the road remains the same height after each repaving.

“It’s a vexing problem of urban life. You try to avoid situations like this but sometimes it’s impossible,” Mr. Heller concluded.