No winners in battle of construction vs. walkers

A dangerous patch of sidewalk brings down two on Riverdale Avenue 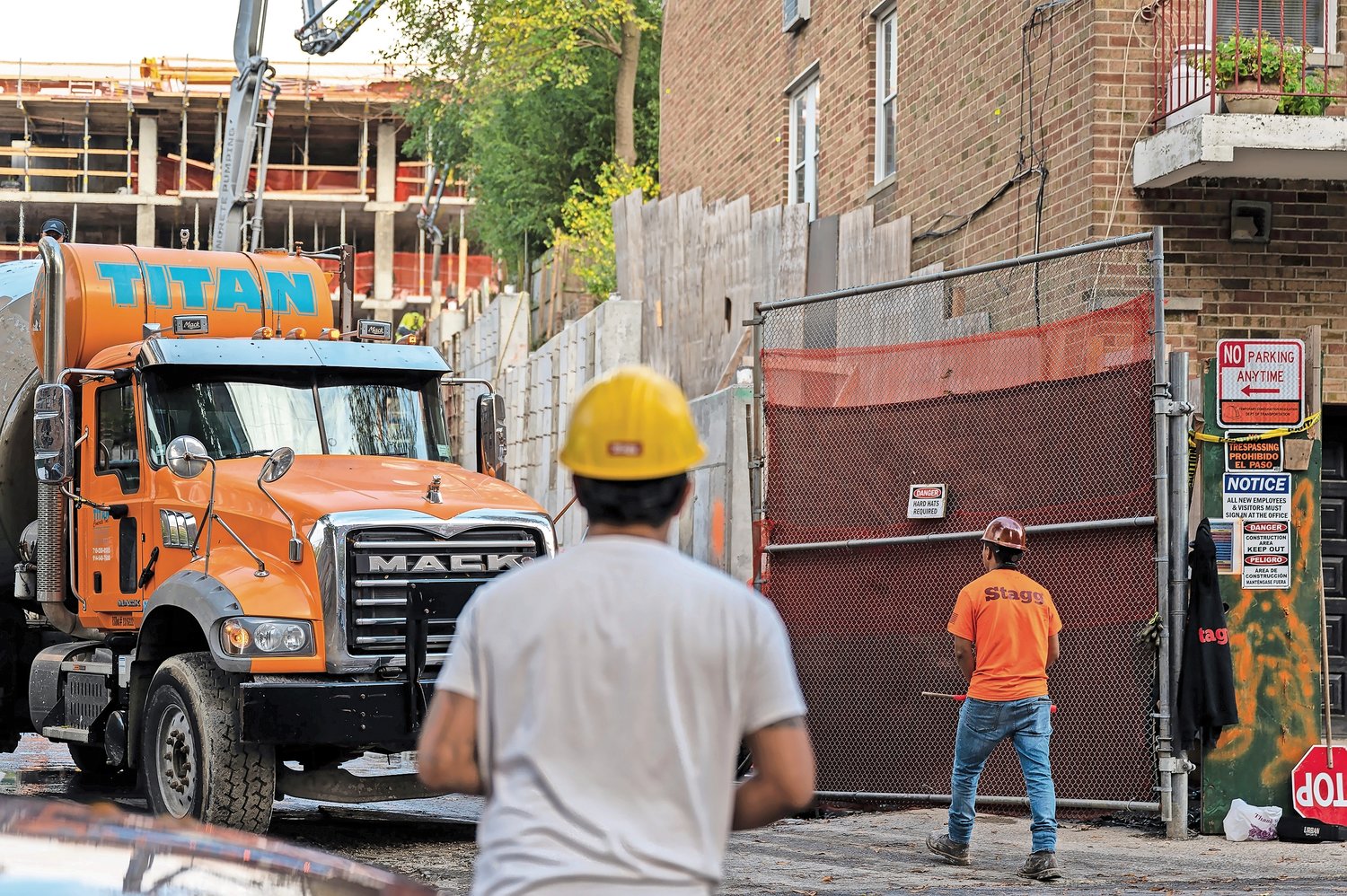 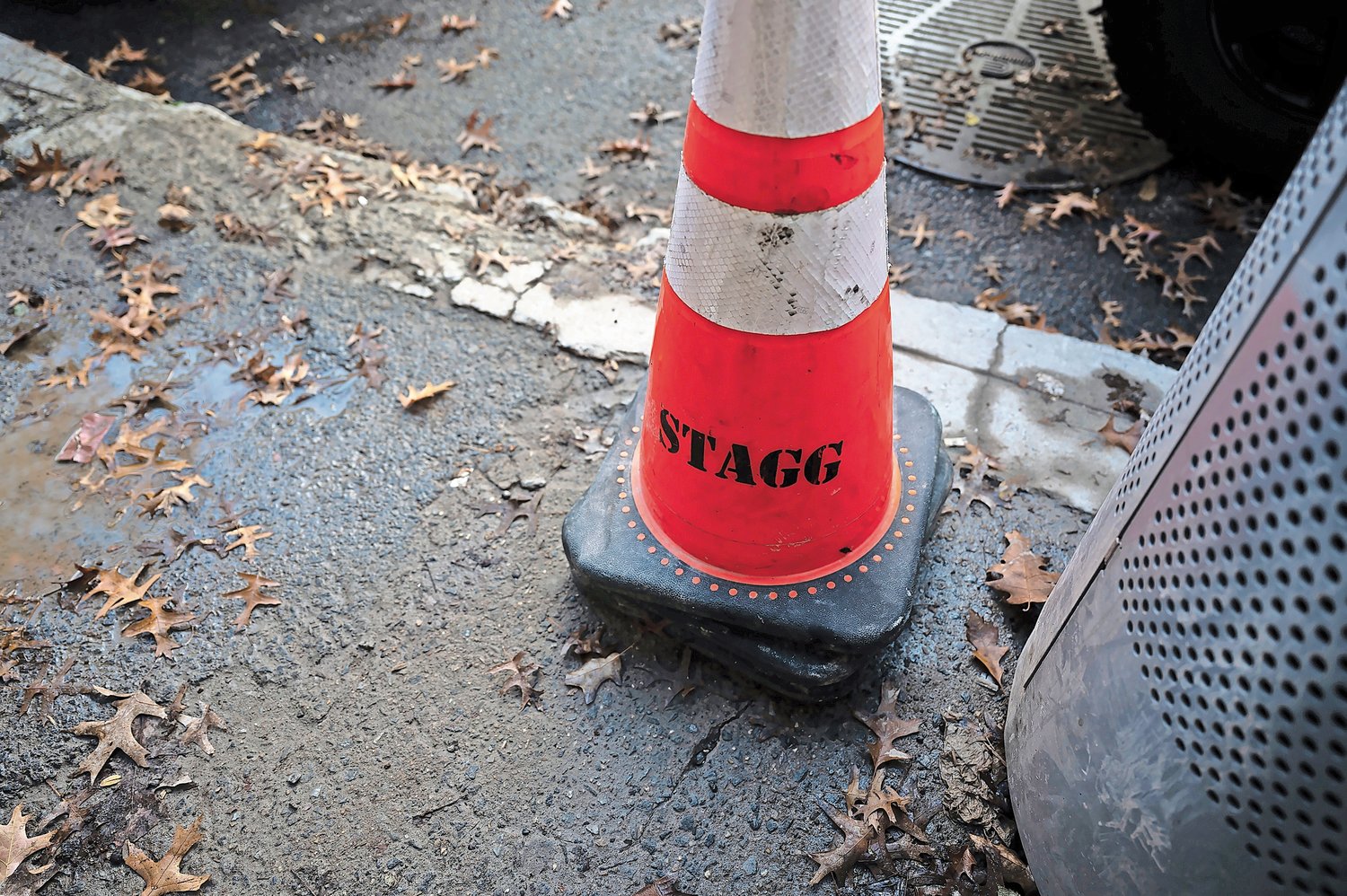 Stagg branded traffic cones at 3745 Riverdale Avenue, where a couple of lawsuits were filed for a dangerous sidewalk there.
Hiram Alejandro Duran
Previous Next
By Abigail Nehring

Excavators swarmed over piles of brown earth at 3745 Riverdale Ave., on April 11 as Thaïs Rutledge approached on the east side of the avenue. It would’ve been impossible for the workers to hear over the drilling when she tripped on the uneven ground and landed hard on the sidewalk just outside the construction fence.

“I remember a woman reaching over me and saying, can I help you? Like an echo,” Rutledge recalled. “I saw teeth on the ground.”

A driver who saw her go down pulled over.

“To my right, there was a mother in an SUV looking at me,” Rutledge said. “She pulled out these burp cloths, and she’s putting them in my face. That’s when I saw the blood.”

They asked if they could call an ambulance, but Rutledge said, “I’ll be fine, no thank you. I’m a baby boomer.”

But she was in shock.

Rutledge’s ordeal was just the beginning. When EMTs finally rushed her to New York-Presbyterian Allen Hospital, they knew she was concussed. She also suffered a fractured jaw and deep facial lacerations, which doctors sutured with glue before transporting her to Irving Medical Center for further treatment. Months later, pain still radiates from her eyes.

Rutledge isn’t the only person who fell on the broken patch sidewalk where contractors have been dropping off heavy equipment and building material. Lawrence Juris, who lives around the corner, fell at the same location on Feb. 17 and suffered a broken wrist.

Juris and Rutledge’s injuries are documented in tort suits they’ve brought against Stagg Group, the real estate firm owned by Mark Stagg overseeing the construction of an 18-story apartment building at 3745 Riverdale Ave.

“I know Riverdale well. I’m not unaccustomed to the streets,” Rutledge said. “No developer should allow a sidewalk to exist like that. They should have put wood or rubber over it, put down orange cones.”

Stagg and Community Board 8 were ready to turn a new leaf when construction crews broke ground in February on 3745 Riverdale Ave, then a gaping concrete hole in the middle of Riverdale’s thrumming commercial corridor.

Stagg scooped up the troubled property and the Greek Express building from Simone Development for $6.5 million in January, planning to turn it into “luxury affordable” apartments – a phrase Stagg is fond of. It describes the niche he’s carved out as one the borough’s most prolific “Affordable New York” builders. By next year he plans to complete 733 apartments in progress across the Bronx.

“I’m really proud to say affordable luxury,” Stagg told The Riverdale Press in July. “It doesn’t matter if I’m building in Riverdale across from the horse stables or if I’m in the South Bronx. I build it the same way, with all the same finishes.”

But CB8 land use committee chair Charles Moerdler has been wary ever since Stagg bandied about plans to build apartments at 5731 Broadway in 2017, then constructed CB8’s first homeless shelter at the site instead.

Nearly all of Stagg’s multi-family buildings in the Bronx rely on the generous state tax break that expired in June, leaving him and many developers in the lurch. New building filings flew in at a feverish pace in the first quarter of 2022 — a 69 percent increase year-over-year, according to the Real Estate Board of New York’s analysis.

Stagg Group and its construction arm, BE Bronx Builders, needed to sink pilings into the ground at 3745 Riverdale Ave. and about half a dozen other construction sites before the demise of the 421-a tax break on June 15, closing a chapter of history in New York. When Moerdler asked Stagg Group’s senior vice president Jay Martino to participate in regular meetings with a special land use subcommittee to monitor progress at 3745 Riverdale Ave., he diligently agreed. By April, excavation had begun without a hitch.

Who falls through
the cracks?

Nationally, there are about 70,000 workers for every one federal inspector, according to data on the agency's website. So "to have any OSHA violations is kind of a big deal,” said an organizer with Laborers Local 79 who spoke to The Press on background.

Buildings inspectors work closely to enforce safety standards on construction sites that fall under their purview in New York City. City inspectors have visited 3745 Riverdale Ave. frequently since work got underway earlier this year and seem to have increased oversight after a worker hired by Stagg’s concrete subcontractor, EBW Structure, tripped on debris while carrying formwork. Francisco Antonio Lopez Cativo was taken away by ambulance after his fall on July 29.

That day, inspectors found workers standing on an unsafe plank 10 feet above the ground and climbing a staircase with no overhead protection. They issued a partial stop work order and penalties totaling $20,000.

The Local 79 organizer said it’s not uncommon to see eight or nine subcontractors hiring workers at a new building site. An injured worker might be “told to go to the hospital and the employer will take care of the bills,” they said. “The employer pays a fraction of the cost, the health care facility eats the rest of it, and the subcontractor’s workers’ compensation cost doesn’t go up.”

It was not enough to protect Cativo from a fall that twisted his knee and put him out of work, according to his lawsuit against BE Bronx Builders – the third stemming from an accident at 3745 Riverdale Ave., this year.

Stagg Group’s Jay Martino said he had no comment on how the company planned to resolve the three lawsuits. Since Rutledge and Juris fell on the same patch of sidewalk earlier this year, he said they filled in the area with blacktop.

The buildings department never got wind of the injured pedestrians, and neither incident is included in detailed monthly accident reports inspectors maintain online.

Buildings spokesman Andrew Rudansky said the department launches an investigation when they learn of a someone hurt near a job site.

“If we were notified, you’d see a record of it,” he said. “Hypothetically, if a pedestrian was hit with a falling hammer, they will call 911 or report it directly to us. Then we will investigate and include it in our count.”

Trips and falls are among the most common injuries to the general public, he said, along with falling debris and heavy doors swinging open onto the public right of way. “This is definitely within our purview, but I don’t see that we were notified in this case.”

David Tannenbaum, who’s representing Rutledge in her suit against BE Bronx Builders said he spoke briefly with Stagg about the case before the firm filed their reply denying any wrongdoing. It’s now moving to discovery.