Not even social distance can interrupt good art 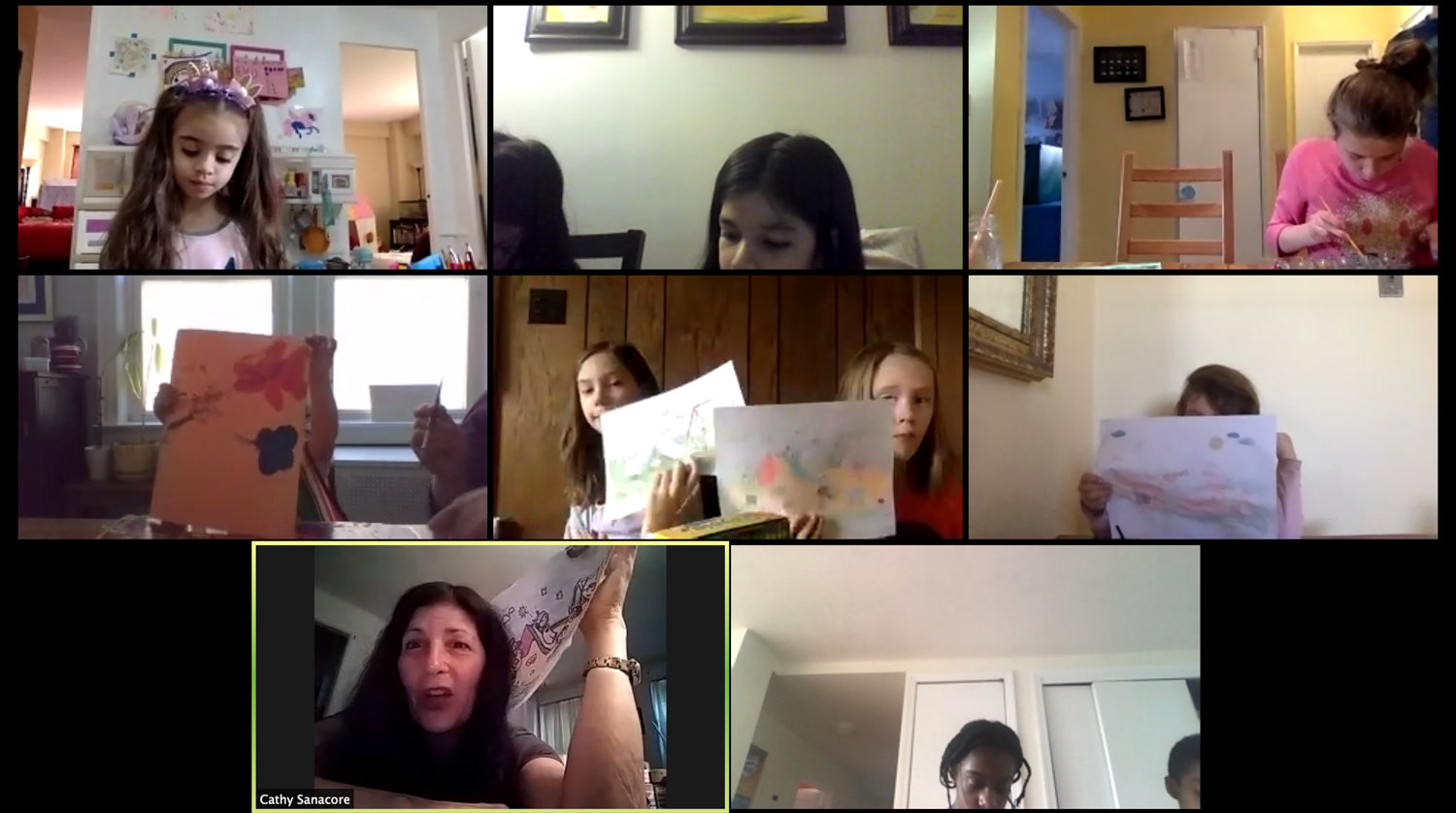 After the initial panic subsided, Cathy Sanacore knew exactly what she had to do.

Since last fall, Sanacore has made weekly trips to a side room to Yo-Burger on Riverdale Avenue. Not because she’s hungry, but because every Tuesday afternoon, Sanacore would gather as many children as she could, helping them use paints to create their best approximations of Leonardo da Vinci.

That came to an end, however, when restaurants were forced to eliminate their dine-in option as part of a citywide shutdown in response to the coronavirus pandemic.

As schools and workplaces have shifted online, so too have other aspects of life — happy hours, dinner parties and art classes among them. Sanacore turned to the popular video conferencing program Zoom in a bid to recapture some of the magic and joy of her in-person painting classes.

“For now, I love it,” Sanacore said, “but there’s nothing like being in the same room.”

In a recent online class, Sanacore brought her signature pep, offering individual attention to the 10 or so children participating. She’d call out a name, and that child would hold up their creation to the camera, bringing a wealth of good cheer and encouragement from Sanacore. Ahead of each class, Sanacore emails each young participant the picture they will work from. During the class, they use whatever they have on hand to color it in, which during this recent class, happened to be a playground scene.

Among those in the class was Claire, the 3-year-old daughter of Jacqueline Novello.

“It’s nice because she has some connection to her regular life,” Novello said of her up-and-coming artist.

The rapid pace of the coronavirus that causes COVID-19 has upended nearly every aspect of life, from restaurants and recreation, to employment and education. Routines have been shaken up in ways big and small.

One person certainly missing those Yo-Burger classes is Alessandra Caro.

“It was the easiest food night of the week,” Caro said.

Caro works as the human resources director at Columbia University, and was responsible for hiring Sanacore as an art teacher for the university’s after-school program. Sanacore has taken her work for Columbia online as well. But for the Yo-Burger crowd, the return of that particular class was a relief. Even the mere mention of that burger joint can elicit excited reactions.

“I can’t even say Yo-Burger in front of” Claire, Novello said.

Before the shutdown, whenever Novello would go to Yo-Burger, Claire would eagerly look in the direction of the side room where the art class would normally be. Novello would have to reassure her that Sanacore isn’t there all the time.

Now the class is inside Claire’s home — at least her computer.

One of the biggest transformations, especially for young children, has been the shift to online learning as schools closed in the wake of the pandemic. In fact, some parents like Tasha Marie Ellin have found the change can be taxing on their children, like her 5-year-old daughter Milania.

“She was on the computer for like six hours the other day, completely drained with no human interaction,” Ellin said.

An educator herself, Ellin heralded the return of Sanacore’s class as a welcome respite.

“It was the most decompressing stress relief that my daughter and I needed,” she said.

Ellin is a single parent, and is balancing her parental responsibilities with her job as a teacher at P.S. 132. It is a delicate needle to thread, and the first few weeks of working from home were particularly difficult. When word circulated Sanacore was going online, it felt like an old friend had come back into her life.