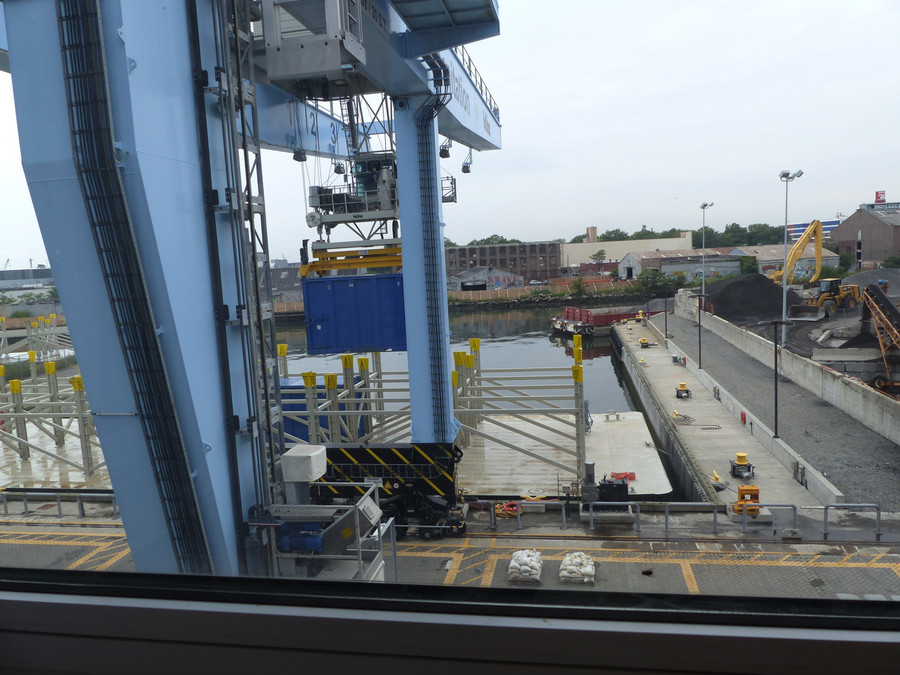 Containers are loaded into a barge, each with up to 20 tons of waste. The barge makes a trip to New Jersey before finding its final stop in Virginia.
Courtesy of Sura Jeselsohn
By Sura Jeselsohn

When I was a kid, I wondered where all the garbage and wastewater went. The unsatisfying answers included, “Nature takes care of everything” and “There is an infinite supply of resources” — which left me unconvinced.

Sadly, I was more correct than any child could imagine.

Like everyone out there, I receive e-mails from a multitude of institutions, many of which I could do without. However, I receive an occasional newsletter put out by the city’s sanitation department, and enjoy the occasional useful tidbit. That’s how I found myself on a complicated subway trip to Brooklyn at 8:15 a.m., heading for a tour of the soon-to-be-opened transfer station at 500 Hamilton Ave.

So many people responded to the tour announcement that despite adding a second tour, tickets were determined by a lottery. Fortunately for me, I won a spot!

The new facility has four watchwords: safety, efficiency, cleanliness, and concern about possible impacts on the community. Sanitation will work there around the clock every day but Sunday. However, when sanitation routine is disrupted by emergencies like snow removal, it will operate even on Sundays.

The tour took us through the facility as if we were following a garbage truck. This had us walking up a ramp overlooking the dumping floor. Up to six trucks at a time can be accommodated.

Each truck, identified by its own unique code, enters through a mechanical door, which closes immediately behind it in order to reduce odor leakage.

Envision a large, empty warehouse with concrete floors that is built on two levels. Each truck backs up to a low wall that separates the unloading area from the lower floor onto which the garbage falls. On that lower dumping floor, there are several front-end loaders complete with special rubber blades on the scoop’s bottom edge intended to reduce noise as the loaders move the garbage from the dumping floor to the shipping containers.

There is a large control center that supervises just this part of the process. Each eight-hour duty tour has two supervisors plus 12 sanitation staff, not including support services.

Just as there is room for six trucks on the upper level, on the far side of the dumping floor there are six huge metal containers into which the garbage is swept.

Another machine on the floor, called the “tamper,” has a long metal column that moves up and down. Its function is to keep packing down the garbage into the shipping containers so that each container is actually filled with the 18- to 20-ton expected load.

There are electronic scales that read out the weight so that no container is fitted with a lid until properly loaded.

A separate control room oversees this part of the process.

To control odor there is a huge heating, ventilating and air-conditioning system that circulates the air inside the building 12 times per hour to remove particulates and odors before expelling the air outdoors.

Once the container is filled, it drops down another level where it is capped with a lid. This equipment is produced by Accu-Lidder. Each container has its metal lid removed upon its arrival at the facility by huge 1,200-pound magnets, and only that lid goes back onto the container. This prevents inexact container closure with attendant mess and odors.

In addition to being sealed, the containers are carefully cleaned again on the outside to prevent odor and mess.

Once lidded, the containers are moved outside next to the pier where a crane places each container into a holding frame on the waiting barge. The sanitation department partners with waste management, which owns the barges and is responsible for everything once the containers are lidded and ready to be loaded.

There is a metal framework on the barge with 24 sections, each of which can hold two containers, one on top of the other. That means each barge will ultimately hold 48 containers at 20 tons each. The expected daily capacity of the transfer station is expected to average more than one barge per day.

Once filled, the barge takes its cargo to Elizabeth, New Jersey, and the garbage ends up in either High Acres Landfill in Rochester, or at Atlantic Waste Disposal in Waverly, Virginia.

The Hamilton Avenue Station will service 10 community board areas in Brooklyn. Riverdale’s waste is processed at the Harlem River Yards, and also ends up in Waverly.

Despite the unattractiveness of waste, it is hard to imagine cities without sanitation services. Our health, and indeed our civilization itself, depends on the invisible work performed by sanitation daily.

Kudos to the men and women who make our standard of living possible.