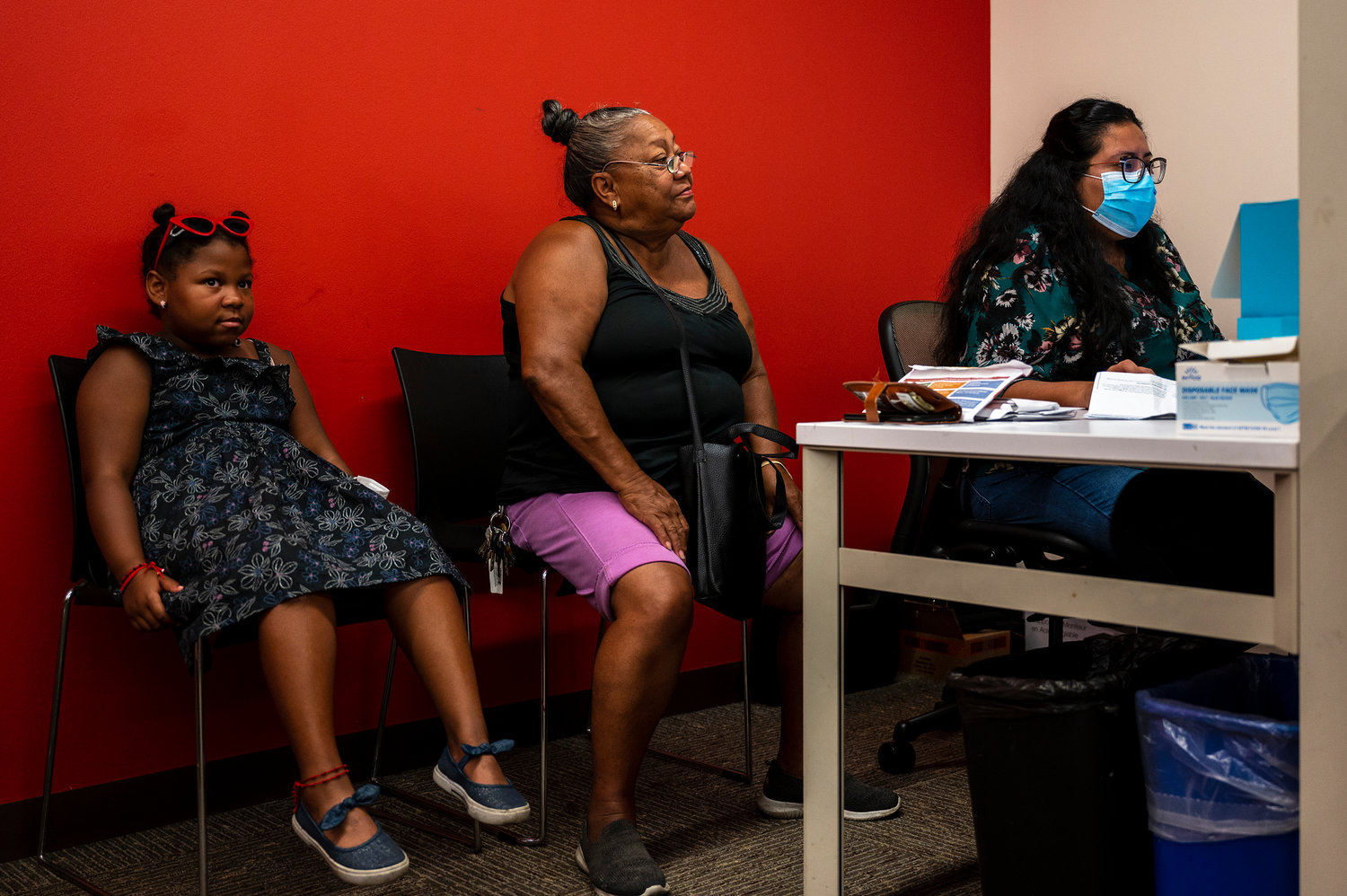 Yessica Flores, a caseworker at Part of the Solution, helps clients Nellie Chacon and her granddaughter Cherish Chacon on a Monday afternoon with her Section 8 voucher issue.
Hiram Alejandro Durán 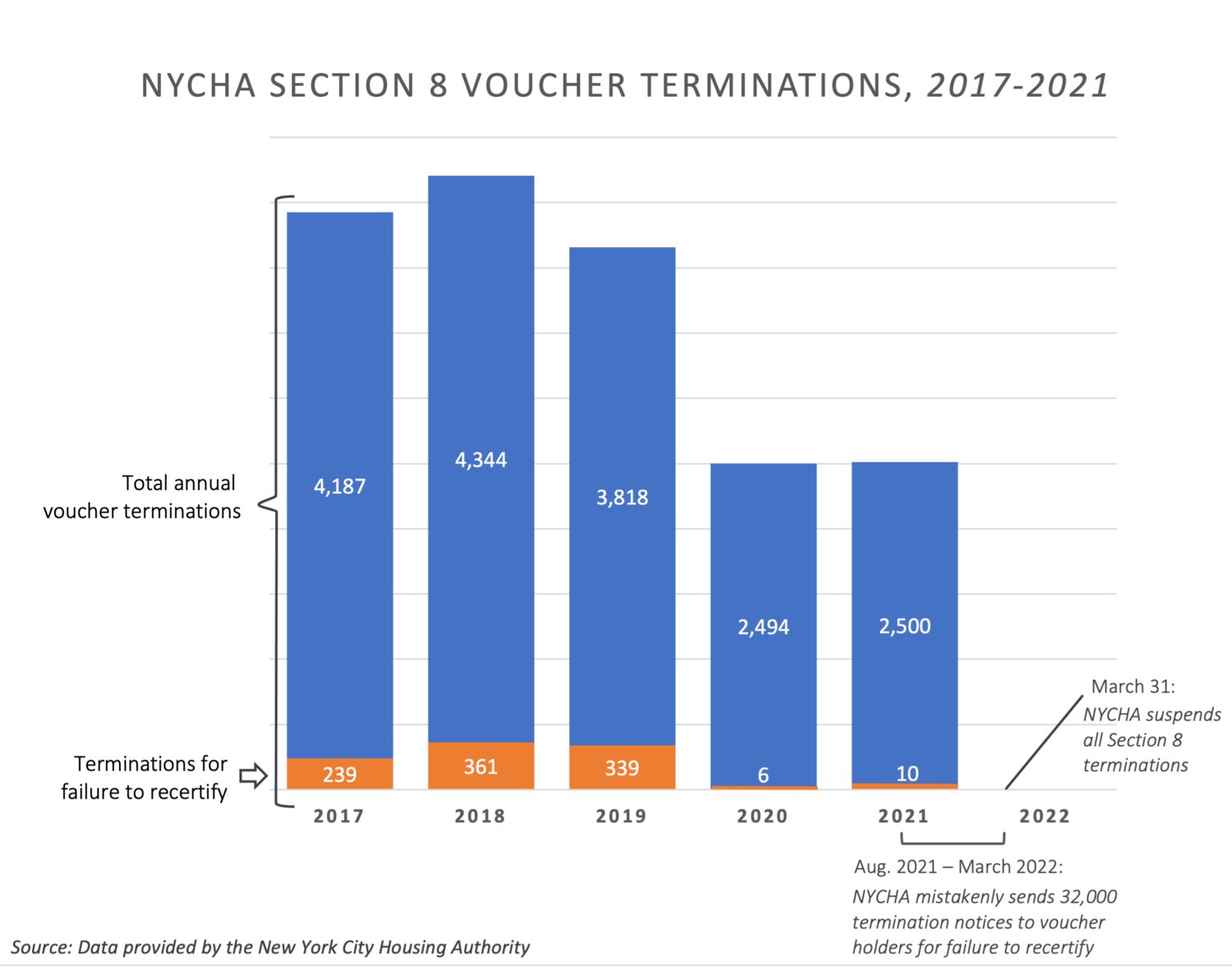 Tens of thousands of Section 8 vouchers remain in jeopardy as the New York City Housing Authority pores over case files caught up in a computer glitch that went unnoticed for eight months — and now it’s slowly being corrected.

The agency has suspended all Section 8 terminations until Oct. 1 as it attempts to quell the panic it created by mistakenly sending termination notices to about a third of its participants in the federal voucher program.

In two months, the agency identified an additional 769 households that received the notice in error, said spokesperson Rochel Leah Goldblatt last Friday, bringing the total to about 11,200 out of a backlog of 32,000.

As the end of the suspension inches closer, NYCHA is continuing to request information from households with incomplete information on file. After Oct. 1, they will need to complete their annual recertification or risk losing their voucher.

“Limited access to updated information is a major hurdle for our clients,” said Anna Luft, a supervising attorney with New York Legal Assistance Group. Voucher holders receiving termination notices are entitled to due process, she added, and can request a hearing in order to complete their recertification.

The average wait time on NYCHA’s customer hotline more than tripled to 38 minutes between February and March, when a notice appeared online alerting the public to an error in NYCHA’s Section 8 voucher program.

At the time, NYCHA’s customer centers were still closed to in-person consultations. They reopened in April, just as the full extent of the problem was coming to light.

The disclosures came after lawyers with the New York Legal Assistance Group threatened to sue.

Luft said her clients are experiencing three-hour wait times and dropped calls, rendering the hotline “essentially inaccessible to anyone who has anything else to do in their day.”

In fact, the number of calls NYCHA is receiving has more than tripled, Luft said. “And if you look at the number projected for 2022, it comes out to 14.6 calls per household. This suggests significant ongoing and systemic issues.”

Case managers at Part of the Solution — or POTS — a hunger and poverty assistance group for some of the borough’s poorest ZIP codes, knew something was awry since the beginning of the year.

“We saw the stress in peoples’ faces,” said Juan Nunez, a supervisor there. In fact, clients have been showing up at POTS’ door long before the problem became public, brandishing a boilerplate notice from NYCHA with a frightening message.

“Essentially, it said your Section 8 is on the verge of being terminated if you don’t submit a recertification by a certain date,” Nunez said. “But we didn’t know there was a glitch.”

“We’re not a Section 8 office, but we try to help,” Nunez said. “A lot of clients are seniors or not technologically advanced. It’s not easy to access the self-service portal. The main issue we had with Section 8 was it’s very difficult for clients to get help with submitting documents.”

POTS workers began making appointments for those getting letters to meet directly with NYCHA representatives as soon as the agency’s offices reopened. While many have been helped, others are getting ping-ponged back and forth between NYCHA and POTS.

“This was very frustrating because so many folks need that help and were physically barred from reaching NYCHA,” Nunez said. “When they started sending folks back to us, it got to the point where we gave people letters to bring to NYCHA saying we couldn’t determine what was going on.”

NYCHA’s annual Section 8 termination rate hovered around 5 percent in recent years, and then plummeted to below 3 percent in 2020 as the coronavirus swept the globe. It remained low in 2021.

Before the pandemic, several hundred of those terminations occurred as a result of failed recertifications, a packet of information Section 8 voucher holders are required to submit annually to verify their income and expenses.

These recertifications typically cause an annual frenzy of paperwork and phone calls to NYCHA’s customer center — and it was one of the first things the agency paused in 2020 when it stripped administrative operations to the bare bones, and closed offices in the Bronx and Brooklyn.

Then the floodgates opened. Over the course of eight months beginning last August, a botched update to the agency’s document scanning system began mistakenly identifying households with missing paperwork. The agency sent a barrage of termination notices to more than a third of its Section 8 participants.

NYCHA is now reviewing cases manually to check for missing documents, Goldblatt said, and working to help get them online, by mail, or at a walk-in center.

Callers are being assured the erroneous termination letters are simply a computer glitch, Goldblatt added, and that they can “ignore the notice.”