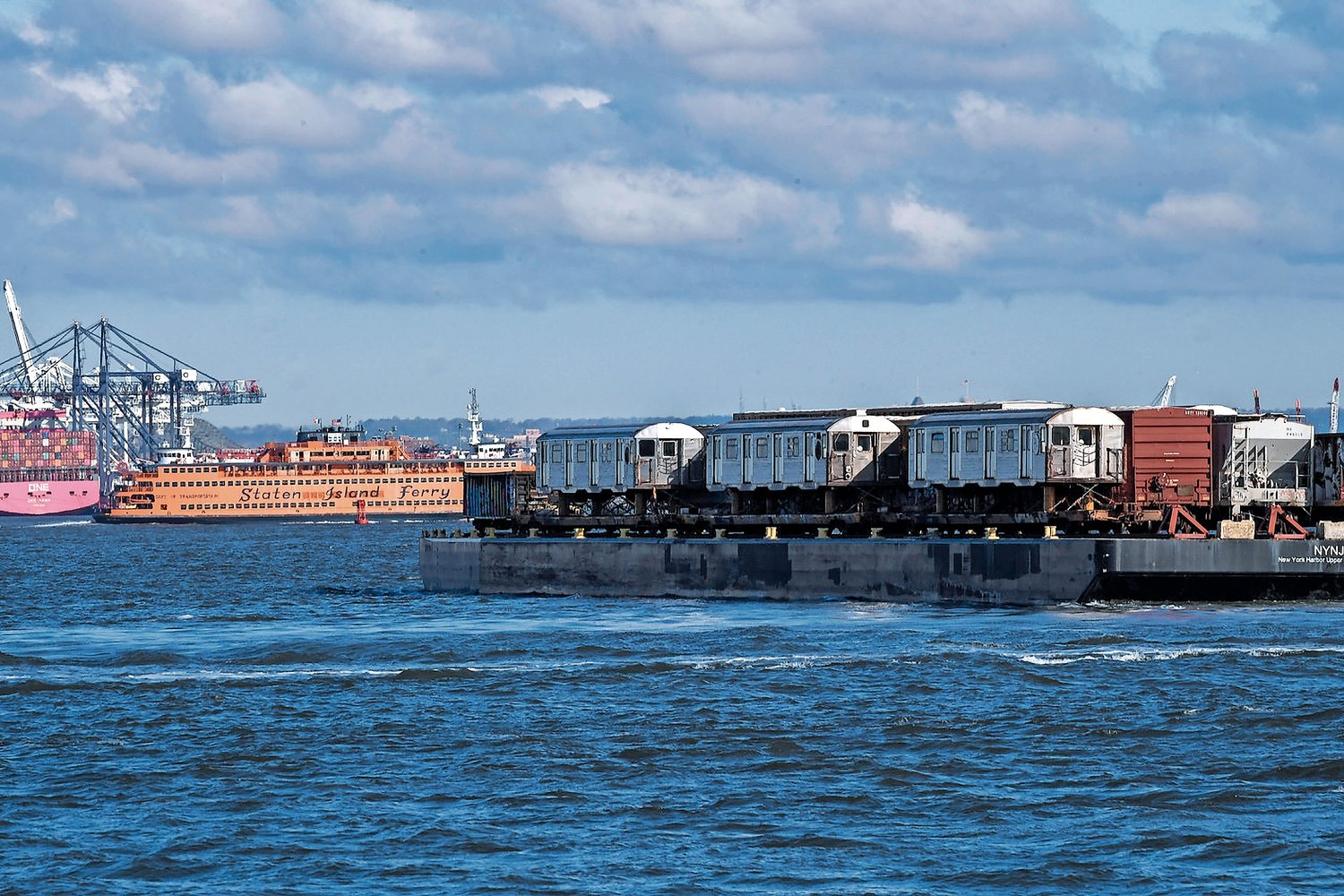 Six decommissioned R32 subway cars are moved from the 65th St. Yard by New York New Jersey Rail aboard a car float bound for Greenville Yard on Thursday, May 5, 2022. The cars are en route to their final destination in Ohio for scrapping.
Marc A. Hermann/Metropolitan Transportation Authority
BY GARY LARKIN

For subway train aficionados and those commuters who may have made connections from the A, C, J or Z lines over the years to the local 1 and 9 line in greater Riverdale, the Metropolitan Transportation Authority has some sad news for you.

It has retired six of the R-32 cars, nicknamed the Brightliners, and shipped them off to Ohio. The R-32s were the first large fleet of mass-produced stainless-steel cars purchased by the New York City Transit in 1964. There were 600 in all. They made their final run in January on the Q line.

The MTA put the cars on a Port Authority barge to sail across the Hudson River to Jersey City, where they were placed on CSX freight trains. The Port Authority’s cross-harbor car float is the only harbor freight crossing of its kind in the New York-New Jersey area, according to the MTA.

The Brightliners, named after washboard-like stainless steel exteriors, were popular enough that they were used in such blockbuster films as “Bridge of Spies,” “Spider-Man: Homecoming” and “Joker.”

Abigail Nehring will join The Riverdale Press June 1 as the new housing and real estate reporter in collaboration with Report for America, an initiative of the Ground Truth Project. She replaces Joseph De La Cruz, who has been the RFA reporter for the past year.

Before coming to The Press, she was a health and education reporter for The New Bedford Light in her home state of Massachusetts.

She holds a master’s degree in nonfiction writing from Columbia University and has also taught writing classes, fact-checked magazine stories, and tended sundry herbs in a greenhouse.

Nehring won a New York Press Club Award for her reporting in City Limits on an East Village landlord caught on tape illegally harassing tenants and, along with Julia Angwin, was a finalist for the John Jay/H.F. Guggenheim Prize for Excellence in Criminal Justice Reporting for their story on police flash-bangs published by ProPublica and The Atlantic.

She is one of more than 300 journalists who will make up the organization’s Class of 2022-23 reporting corps.

“Report for America provides a unique opportunity for journalists to pursue meaningful, local beat reporting that sadly is missing from many of today’s newsrooms,” said Earl Johnson, director of admissions for the organization.

“Together, our emerging and experienced corps members will produce tens of thousands of articles on critically under-covered topics — schools, government, health care, the environment, communities of color and more.”