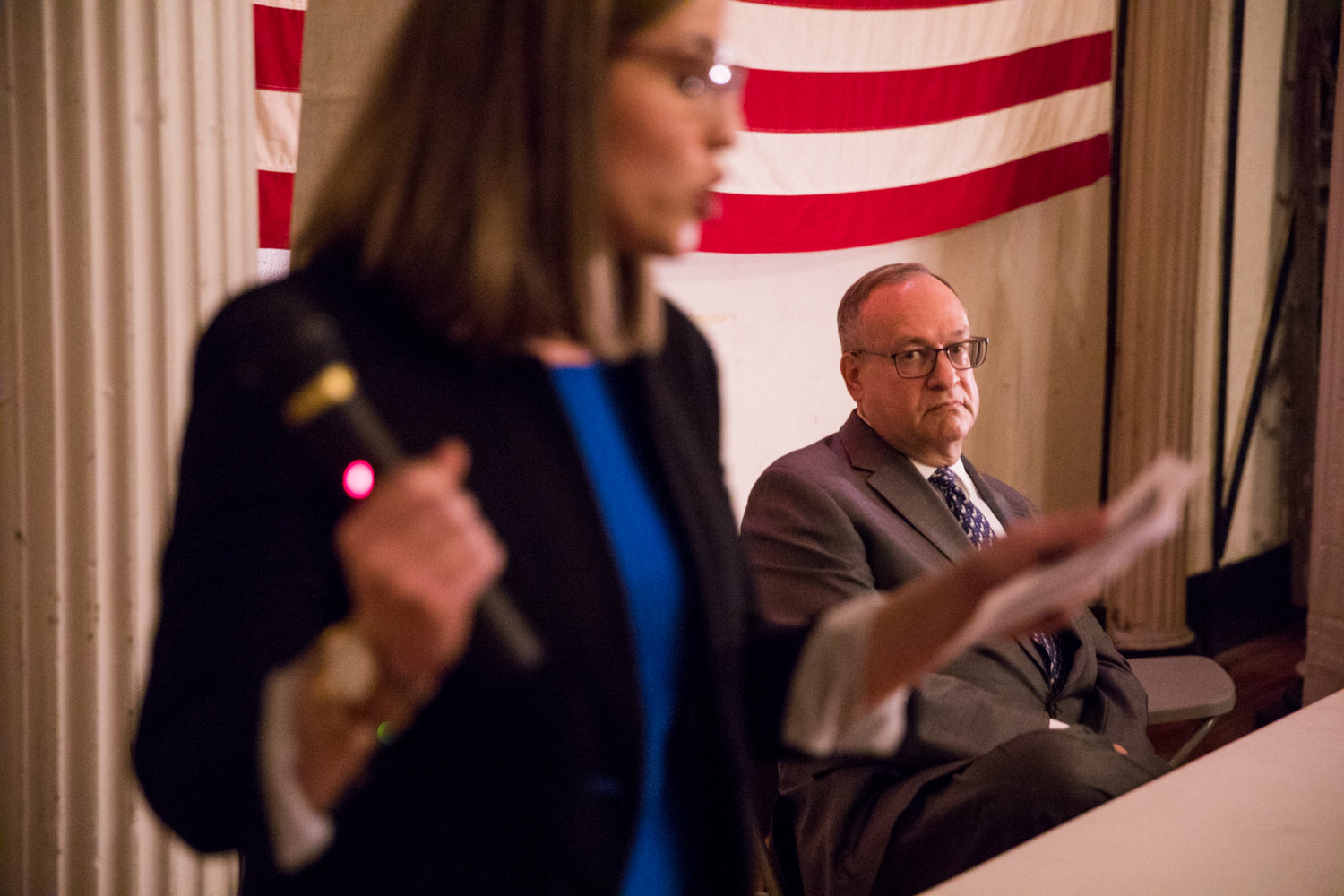 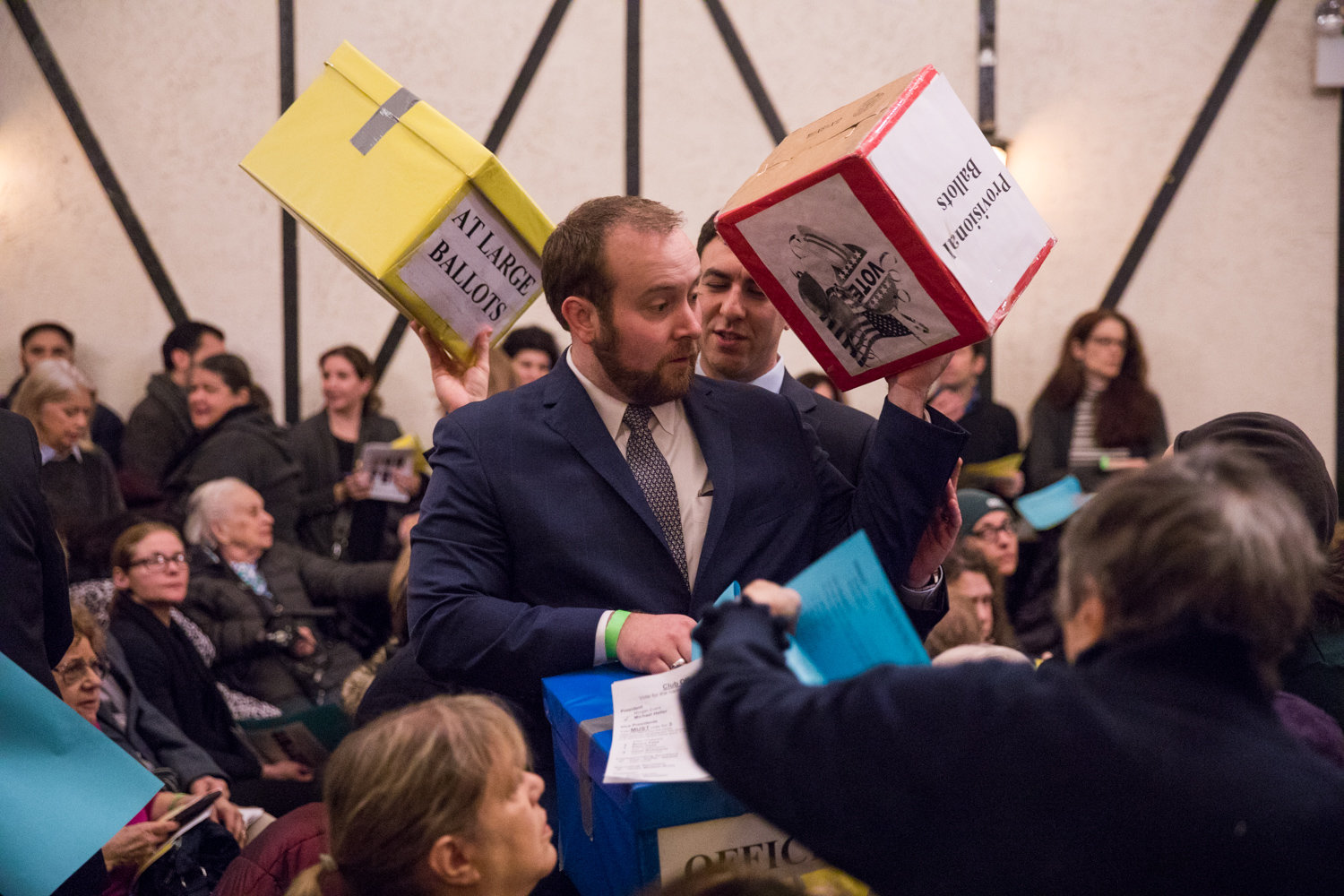 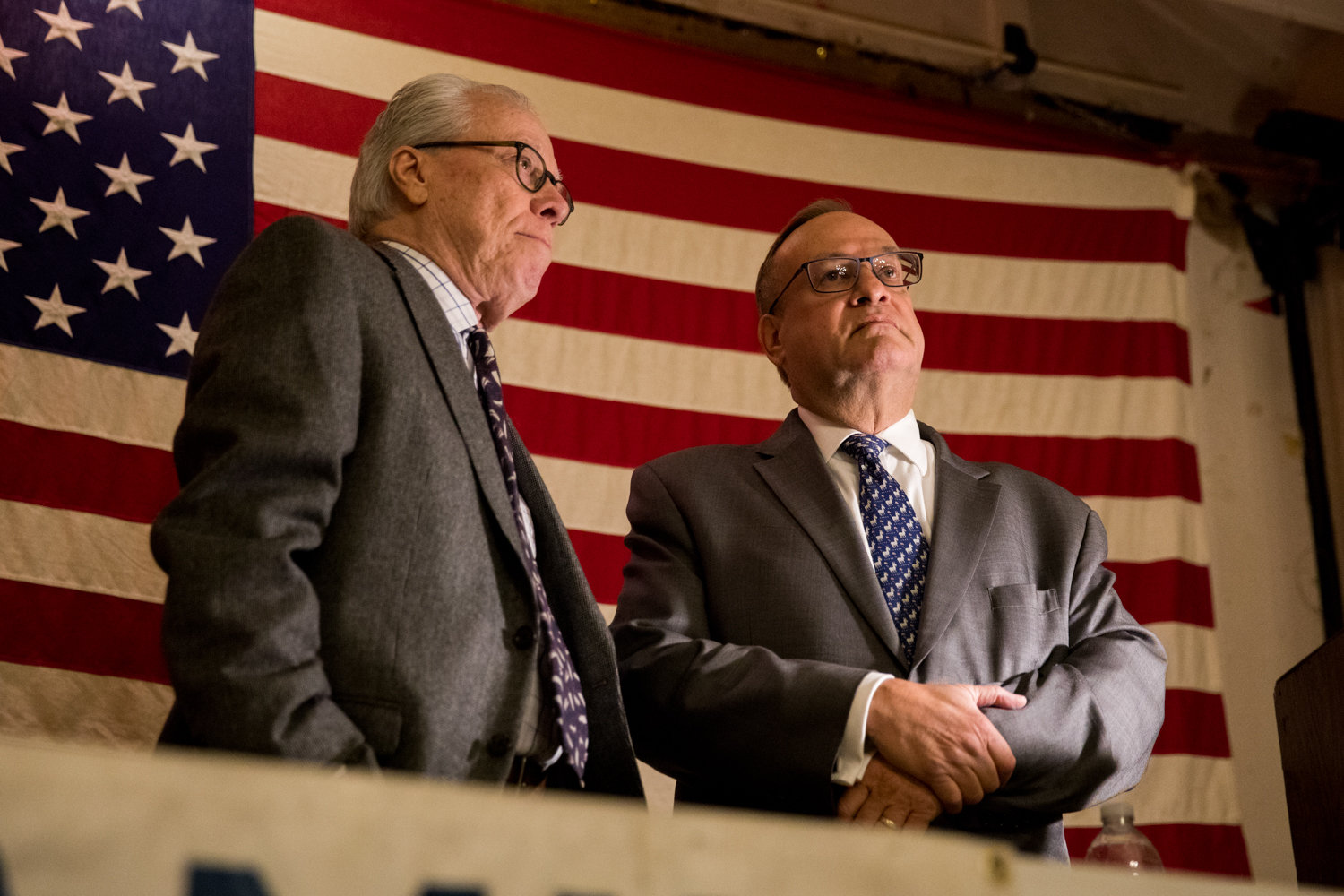 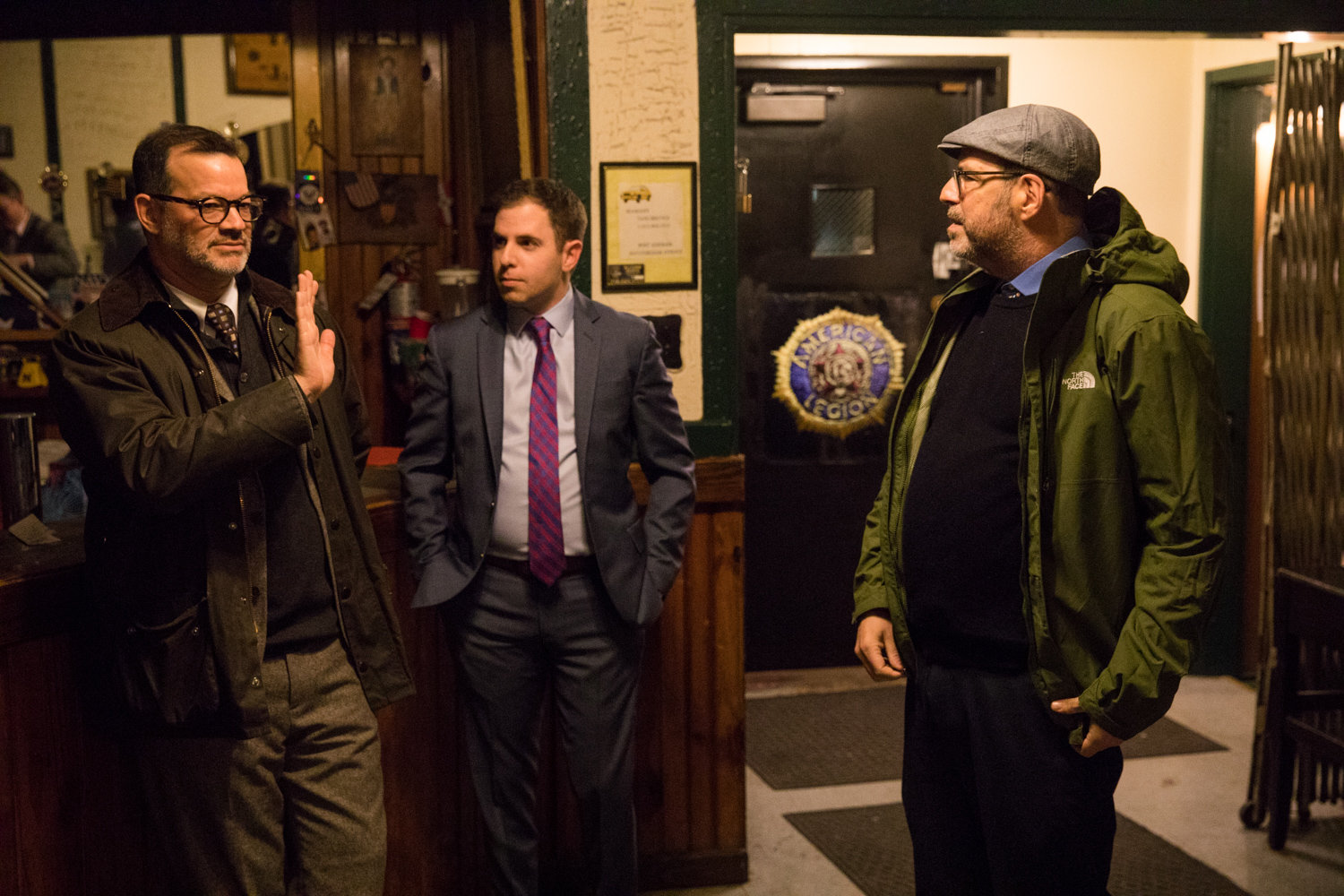 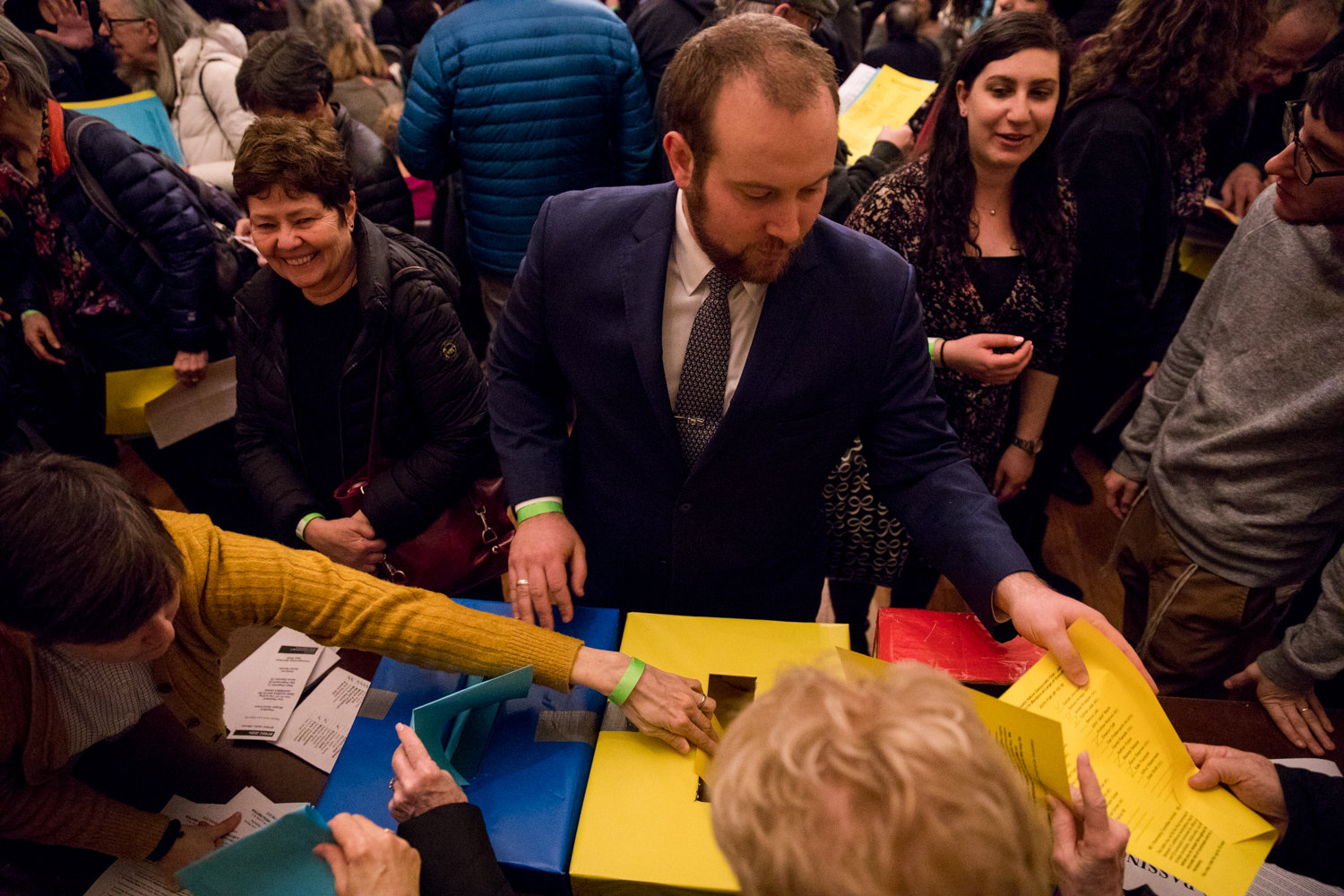 Ivan ‘Duffy’ Nedds helps people cast their ballots during the Benjamin Franklin Reform Democratic Club’s annual meeting on Jan. 29. Nedds, a corresponding secretary for the club who played a primary role in qualifying candidates for the election, is also a paid staffer for Assemblyman Jeffrey Dinowitz.
JULIUS CONSTANTINE MOTAL 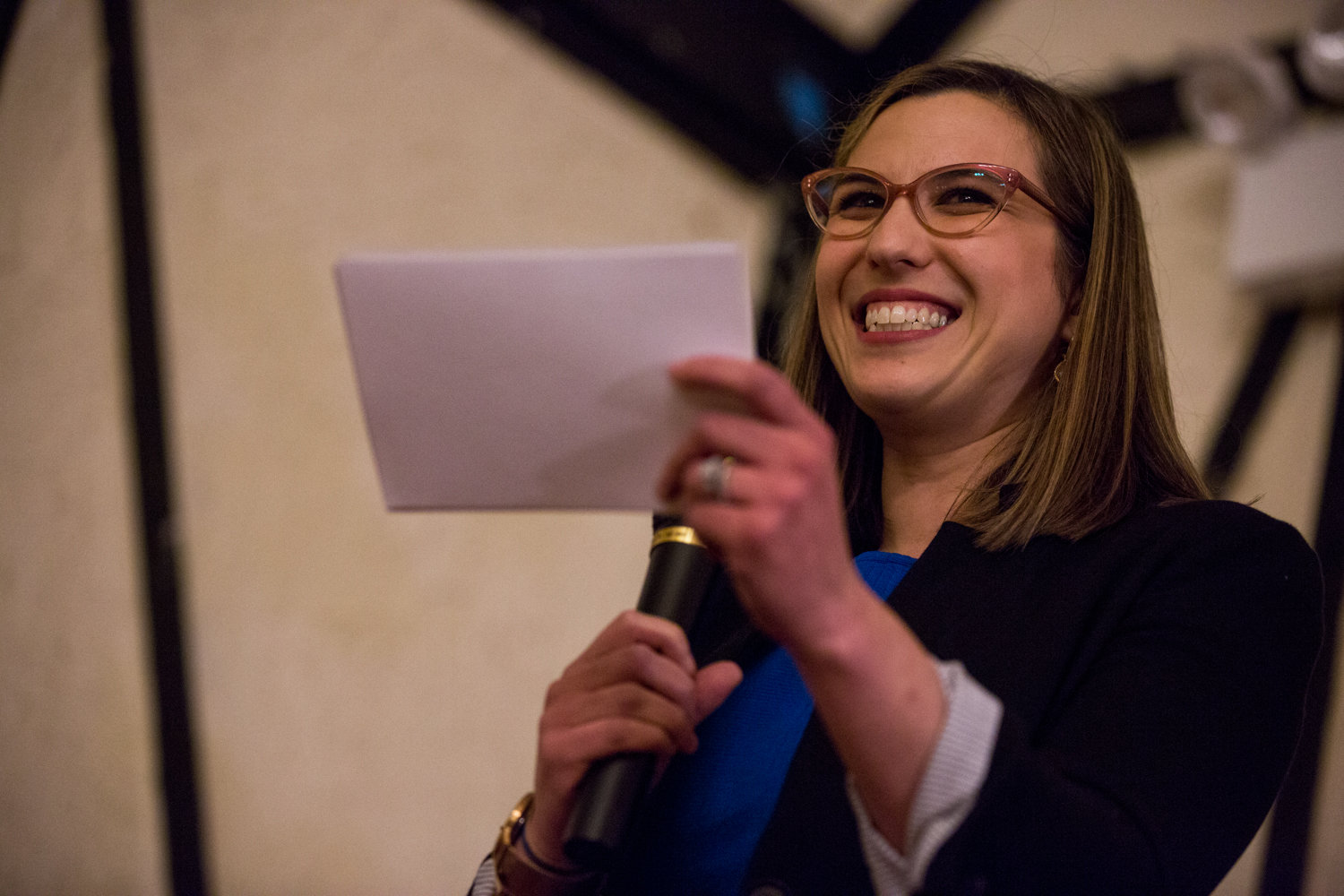 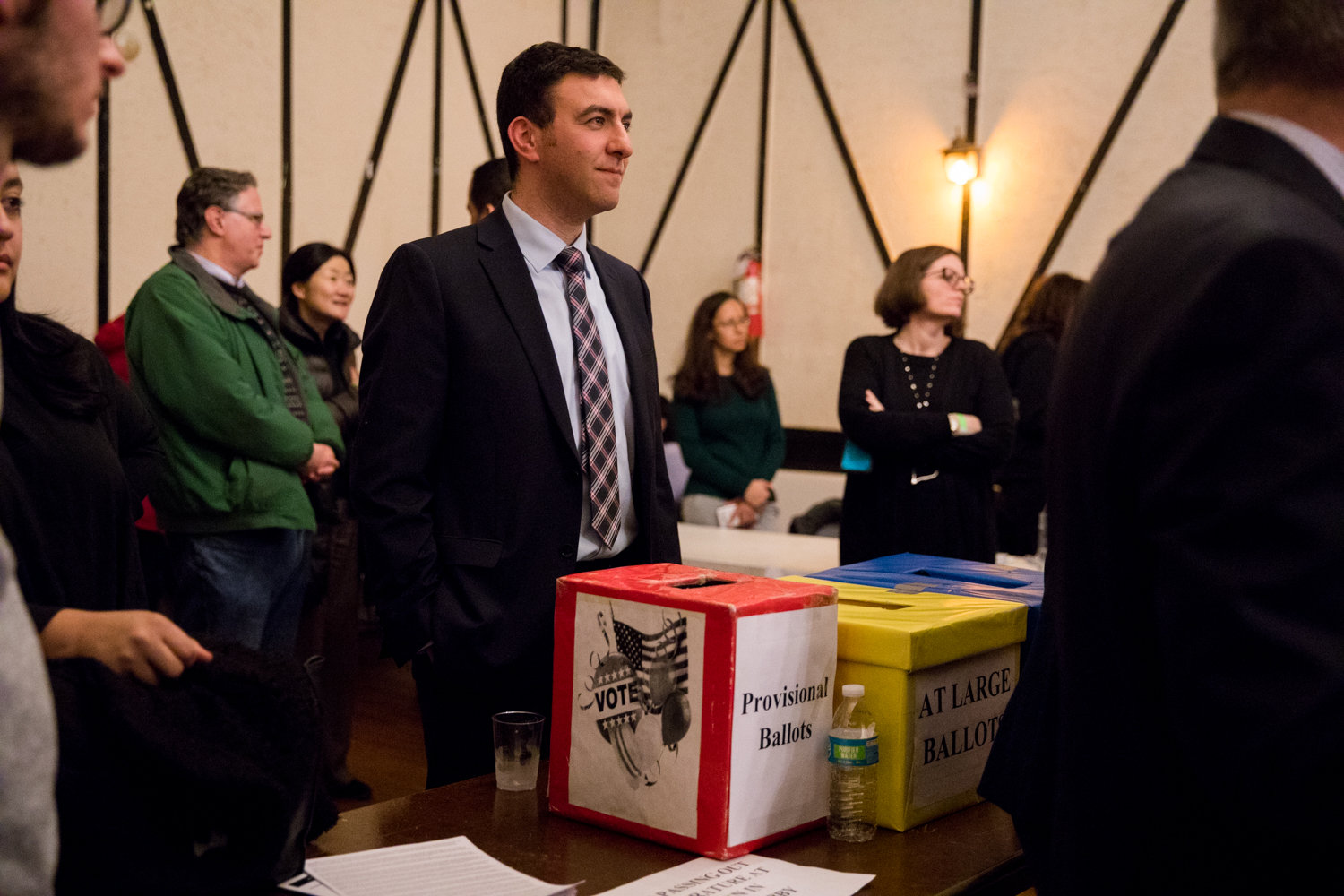 Michael Heller won another term as president of the Benjamin Franklin Reform Democratic Club, but not before welcoming what Assemblyman Jeffrey Dinowitz later noted was the “largest turnout” in the club’s 60-year history, “and probably the largest turnout in many years of any political club.”

Nearly 400 people cast ballots during the club’s annual meeting at the American Legion on Corlear Avenue, deciding among other things whether Heller should continue as president, or if political scene newcomer Morgan Evers should replace him.

Evers, a schoolteacher who first volunteered to help Alessandra Biaggi get elected to the state senate, had pulled together what had been dubbed as an “alternate slate” of candidates that carried with it endorsements from both Biaggi and fellow state senator Gustavo Rivera.

When the slate was announced two weeks before, members of the Ben Franklin Club leadership decried what they said was interference by elected officials in club business, calling the endorsements unprecedented. Yet, at last week’s elections, other elected officials struck back, publicly supporting the most of the candidates selected by the club’s nominating committee — except for six people who were chosen to by the committee, but also appeared on Evers’ slate.

Instead, six new people had been qualified at the last minute by the club’s corresponding secretary Ivan “Duffy” Nedds, who also is a member of Jeffrey Dinowitz’s paid district office staff. That slate got the support of people like U.S. Reps. Eliot Engel and Adriano Espaillat, as well as Dinowitz, state Sen. Jamaal Bailey, Councilman Andrew Cohen and even former councilwoman June Eisland.

Five of the six late candidates were elected, except for Ellen Feld — wife of former club leader Bruce Feld — who was bested by Aaron Stayman in a ranked-choice vote. Stayman was recommended by the nominating committee, but was included in the Evers alternate slate.

Before the election, Evers made her case about a new Ben Franklin Club in a Point of View opinion piece published by The Riverdale Press.

“In this critical moment, we need for our club to be the biggest tent it can be — flexible enough not to break under the pressure of diverse points of view as our party evolves to meet new challenges,” Evers said. “It’s certainly no secret that we are facing some very serious challenges, and every Democrat must rise up to do the work.”

Evers and her supporters regularly cite how the Ben Franklin Club backed incumbent state Sen. Jeffrey Klein in 2018 over Alessandra Biaggi, despite the fact he, for years, led a contingent of breakaway Democrats in the state senate that helped solidify power for who would otherwise be minority Republicans. Biaggi ultimately won the race without the club’s support, part of a broader effort that saw many of Klein’s former Independent Democratic Conference colleagues booted out.

After all the votes were counted, 156 were cast for Evers — which, in the past, may have been more than enough to secure the victory. But the large turnout went in Heller’s favor, with the other 243 votes going his way.

In his letter sent to club members after the election, Dinowitz encouraged all of them to come together to defeat Trump and elect progressive Democrats to office.

“Democracy is not easy, and it’s not always neat,” Dinowitz said. “But it sure is worth fighting for, especially at a time when many of us believe that our democracy is actually on the line because of a president who doesn’t believe in the democratic institutions and values upon which our country is built. Continued in-fighting will mean that we will waste our energies and cancel each other out.

“All of us working together means that, united, we can be the strongest political force in the Bronx.”